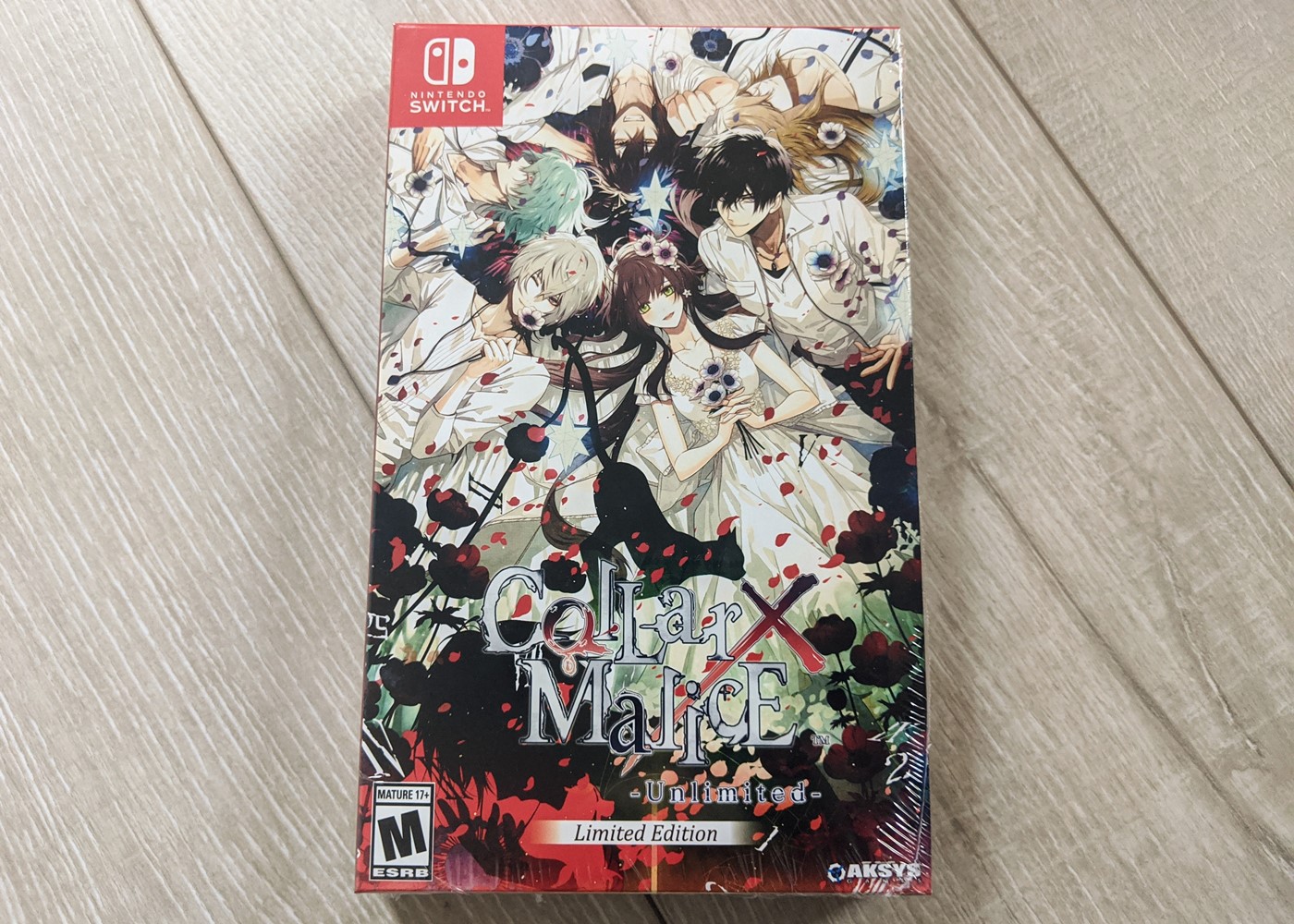 Collar X Malice first graced North America and Europe back in 2017 on the PlayStation Vita. Otome fans adored the game, but many other players missed out on the experience due to it being on Sony’s abandoned handheld. Fortunately, the game saw a worldwide English release via Switch in 2020. With the Switch being as massively popular as it is, Collar X Malice is now able to reach many more players. Aksys Games opted to further engage that fanbase with the recent release of Collar X Malice -Unlimited- also on Switch. This game takes place after the events of the first and as such is not recommended to be played before the original title.

Aksys Games released the game physically and digitally, with a special Limited Edition to entice otome lovers. The standard version costs $49.99 while the Limited Edition raises the price to $69.99. Here’s the extras you get by paying a bit more: a soundtrack collection, Adonis organization pin, X-Day coin and the larger box which contains these special edition contents. As far as otome special editions are concerned, it seems right in line with past goodies. With the basics out of the way, let’s dive into more detail on each item. 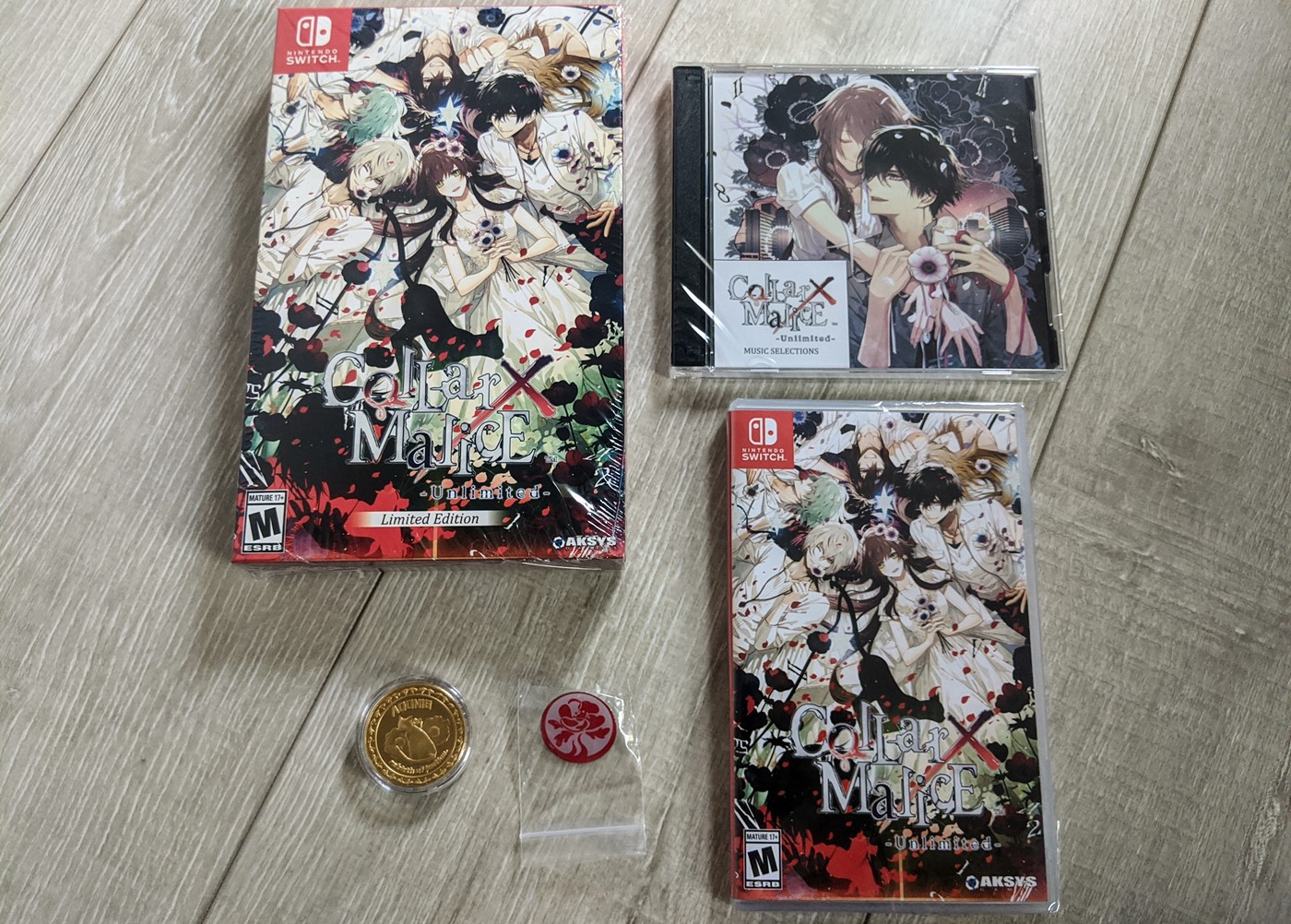 First up is the soundtrack. Soundtracks are a common item with limited editions. This one is a bit better than other pack-ins because it’s a two disc CD set. There are thirty songs included and tracks span both Collar X Malice and Collar X Malice -Unlimited-. They’re included in a sealed jewel case, which is much nicer than cardboard sleeves you often get nowadays with bonus content. Unfortunately, there’s no inclusion of a redeemable MP3/FLAC soundtrack. You’ll need to rip these discs yourself if your goal is to listen without a CD player. At this point, it doesn’t appear the music is streamable on places like Spotify.

The more interesting items in the Collar X Malice -Unlimited- Limited Edition are the pin and coin. Aksys Games have made pins before, though not for special editions. Back in 2018, they had a “Summer of Mystery” campaign which provided otome fans with a collection of three pins. It’s fun seeing them return to the pin world with this newest, higher quality one. The pin is based on the in-game Adonis organization and is one inch in diameter. The design is subtle, making it easy to accessorize with. Only another Collar X Malice lover is likely to recognize the design.

Then there is the collectible X-Day coin. X-Day of course refers to in-game events, wherein a golden coin is always left after an incident. The coin included in this set is a recreation of that same coin. It comes housed within a thick clear plastic shell. You can remove the coin from the plastic if desired, but it’s unclear if that is intended or not as the plastic is firmly wedged together. Either way, the golden coin is utterly gorgeous. The front and back designs are beautifully replicated and make this an awesome collectible item for Collar X Malice fans everywhere. Chances are that the coin will become the most desirable piece of the entire set. 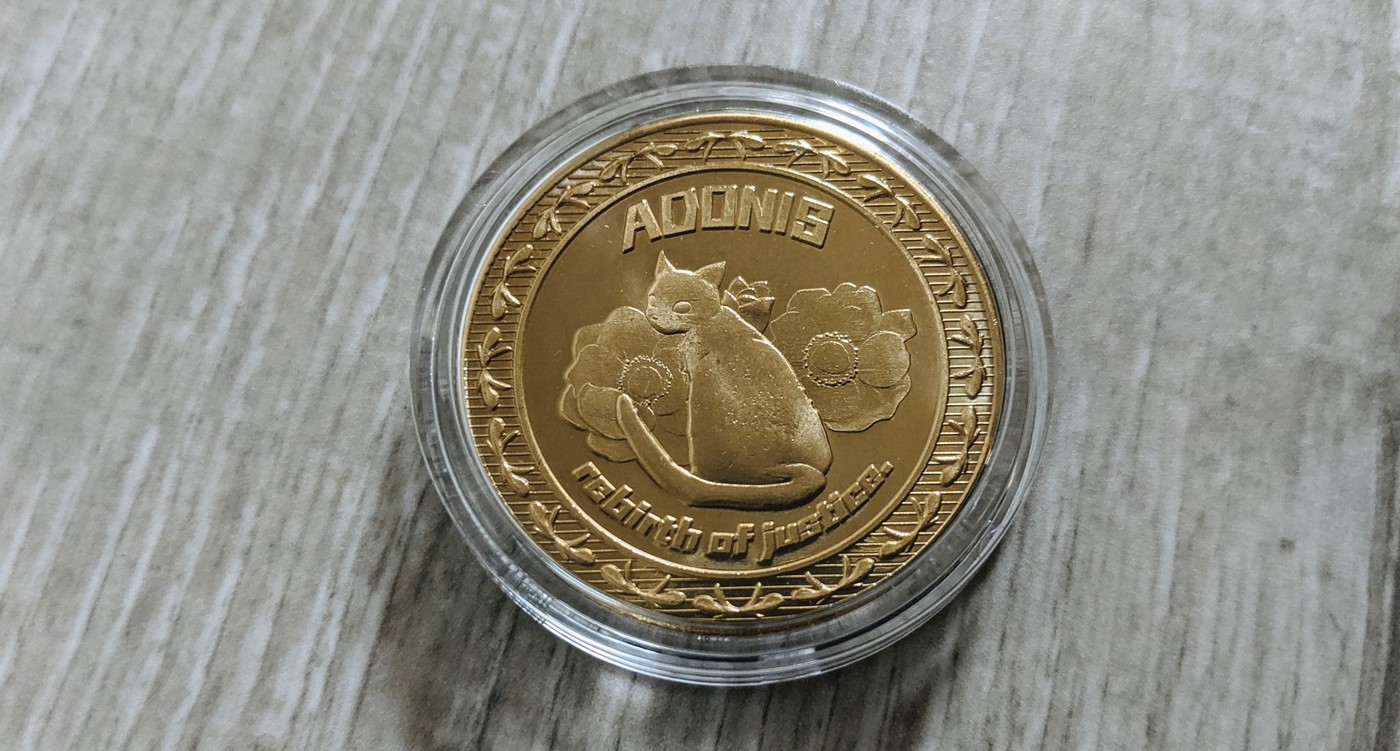 There might not be a lot included in the Collar X Malice -Unlimited- Limited Edition, but what’s there makes it worthwhile. Just having a replica X-Day coin alone is incredibly cool. This edition sold out on the Aksys Games store prior to release, but is still currently available from retailers such as Best Buy and GameStop. Interested parties should snap the game up now before it sells out and increases in price on the secondhand market. Just be sure that you’ve completed Collar X Malice before taking Collar X Malice -Unlimited- for a spin!