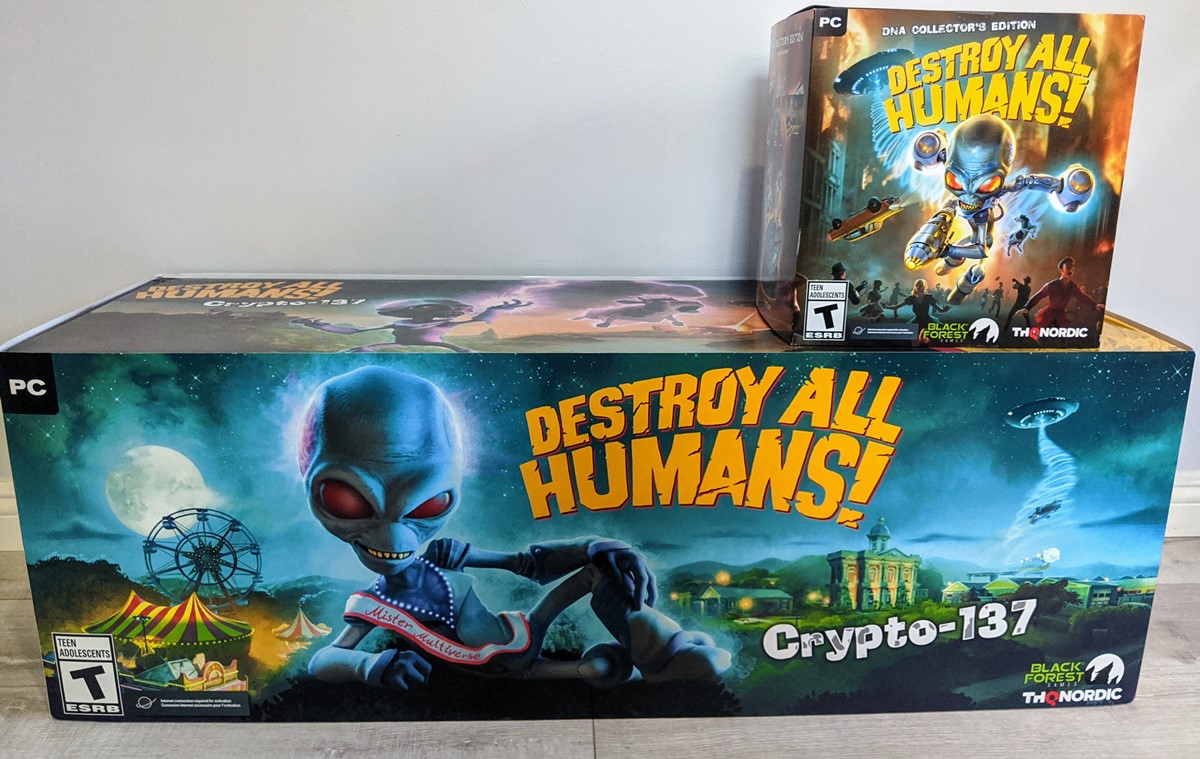 Destroy All Humans! is one of those game series that thrived in the PS2/Xbox era only to disappear a few years later. It’s a shame because there’s a huge lack of games where players get to terrorize humans as an alien menace. The 2005 original is now available in a fully-remastered format which is great news for both fans and newcomers. With that said, it’s likely only the most diehard of fans would be interested in picking up a limited edition. As with SpongeBob: Battle for Bikini Bottom Rehydrated, THQ Nordic produced two special editions of this game available for PC, PS4 and Xbox One.

The two versions are the Destroy All Humans! DNA Collector’s Edition and the Destroy All Humans! Crypto-137 Edition. Both editions offer some of the same goodies between them, but both editions feature something exclusive. The exclusive item for the DNA Collector’s Edition is a figure displaying Crypto and a terrified cow. On the other hand, the Crypto-137 Edition includes two unique items. These are a backpack shaped like Crypto and a huge Crypto statue. 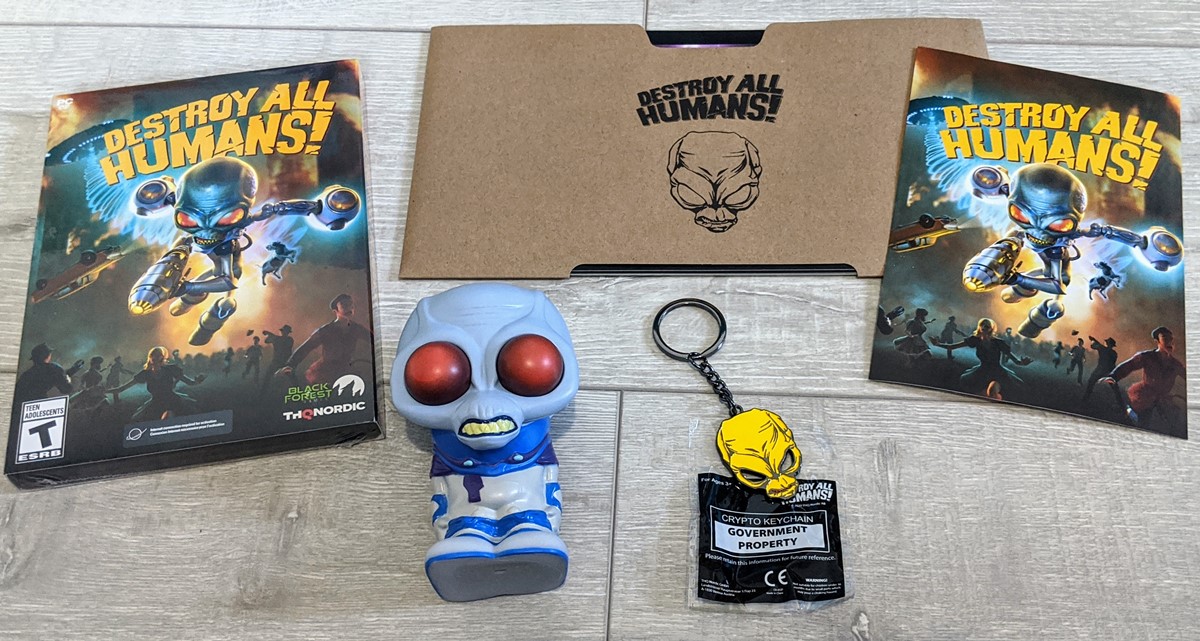 First, let’s go over the items in common between both editions. First up is a small metal keychain featuring an angry-looking Crypto face. Then there’s a squishy Crypto stress toy. Those who squish his head will be in for a surprise — both red eyes pop out when enough pressure is applied. The eye-popping feature doesn’t occur if you squish anywhere else on the body, only the head. Both these items come wrapped in plastic when you take them out of the box. The wrapping gets in on the fun by stating that the contents within are “government property.” 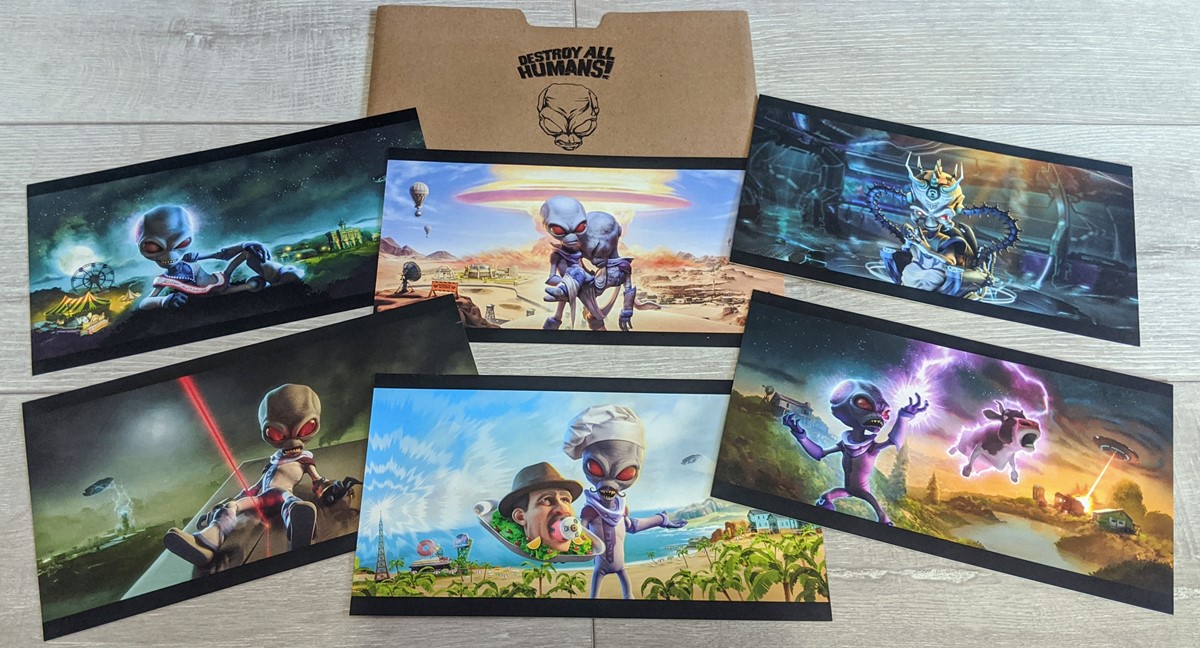 Next up is a series of six lithographs. Each features Crypto in a variety of scenes and poses. They all showcase the Destroy All Humans! brand of humor that fans know and love. The lithographs are housed in a manila folder-style sleeve. This continues the classified government information theme. Of course, the game itself is included as well as all Crypto skin DLC. Note that the PC version includes a physical disc copy, but that’s not all that’s needed to play. The PC edition requires Steam and includes a pamphlet with Steam key on the back. So despite having a disc, you can only play after the key is redeemed to your Steam account. 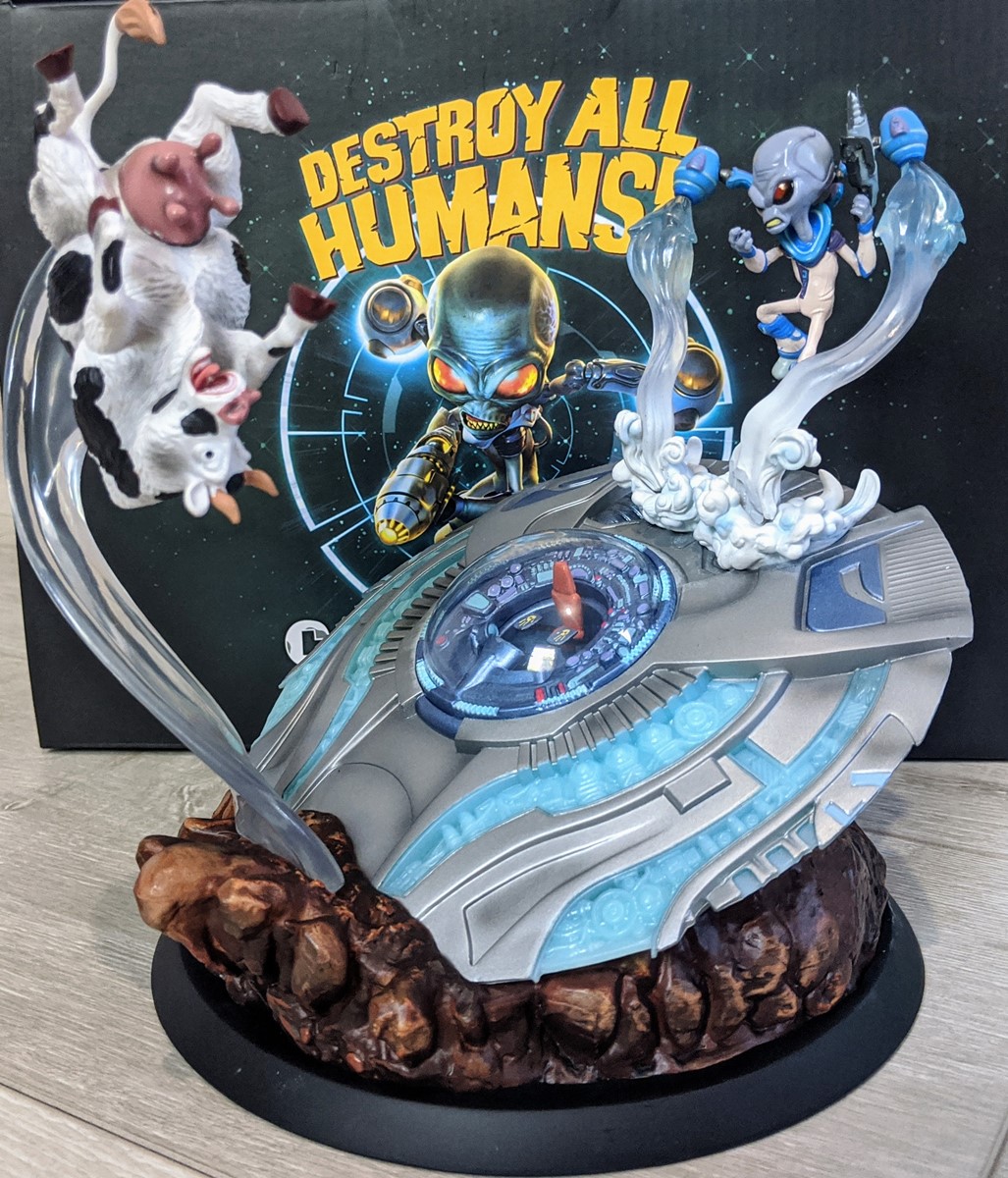 The Destroy All Humans! DNA Collector’s Edition exclusive figure is called the Crypto’n’Cow figurine. It’s an active scene, showing Crypto jetting in the air. An unlucky cow is shown flipped upside down and freaking out. Clearly, Crypto is about to make quick work of the bovine. Also in the scene is a spaceship that crash landed on rocky terrain. The ship includes great details and almost looks illuminated on the blue elements. It’s not, but this effect is achieved via semi-transparent plastic. This figure is nine inches tall and about eight inches in diameter. While a bit large, it could still likely fit into some bookshelves as a great display piece. 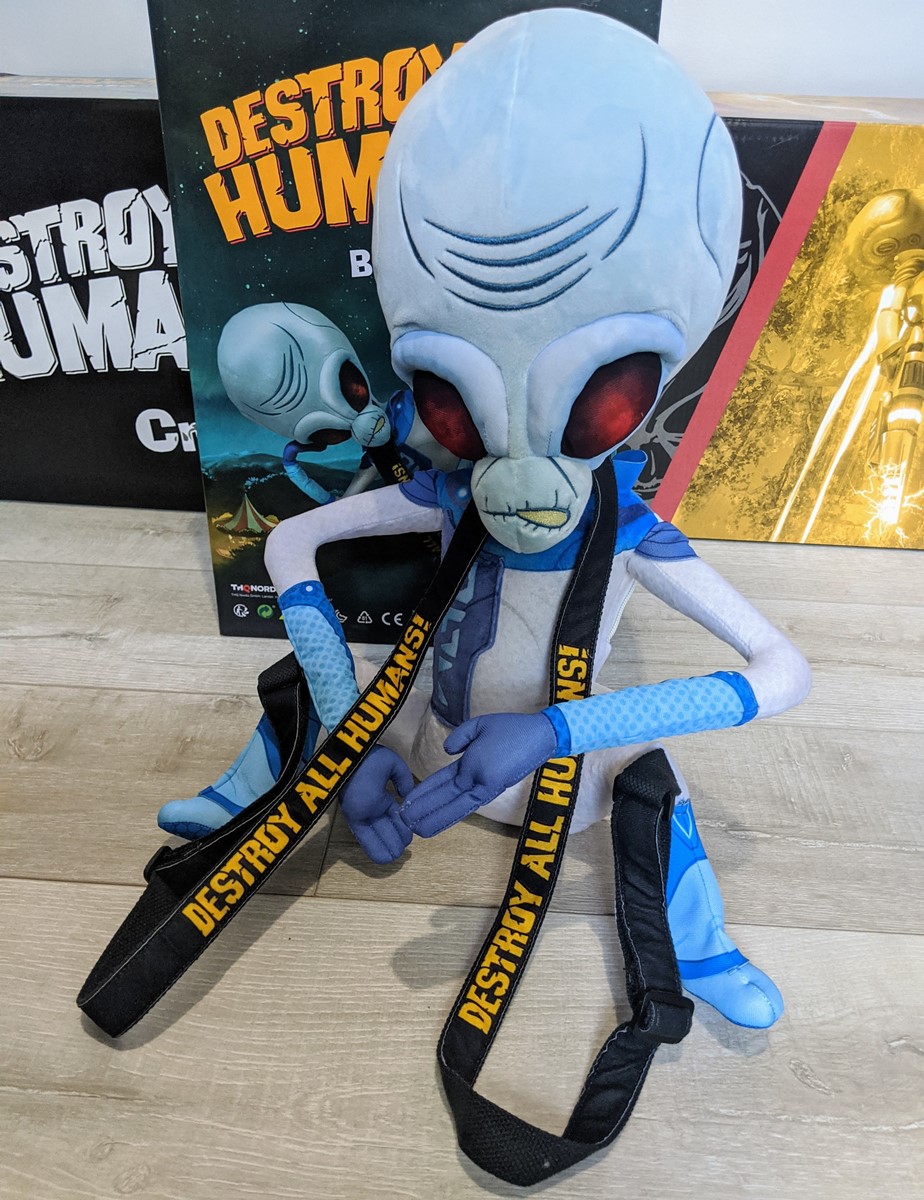 The Destroy All Humans! Crypto-137 Edition is the ultimate collectible for fans. Aside from the Crypto’n’Cow figure, everything else described so far is included. Then there are the two exclusive items. First is an adorable Crypto backpack. This is quite the oddity because it actually contains little storage space. There is a zipper on his back, but there’s only enough space for a wallet or smartphone. It probably would have made more sense to make his head the storage space, but that probably would make the whole backpack too top heavy. All in all, it’s cute to walk around with Crypto cuddled up on your back, but it’s purely a fashion statement and not particularly functional for holding anything. 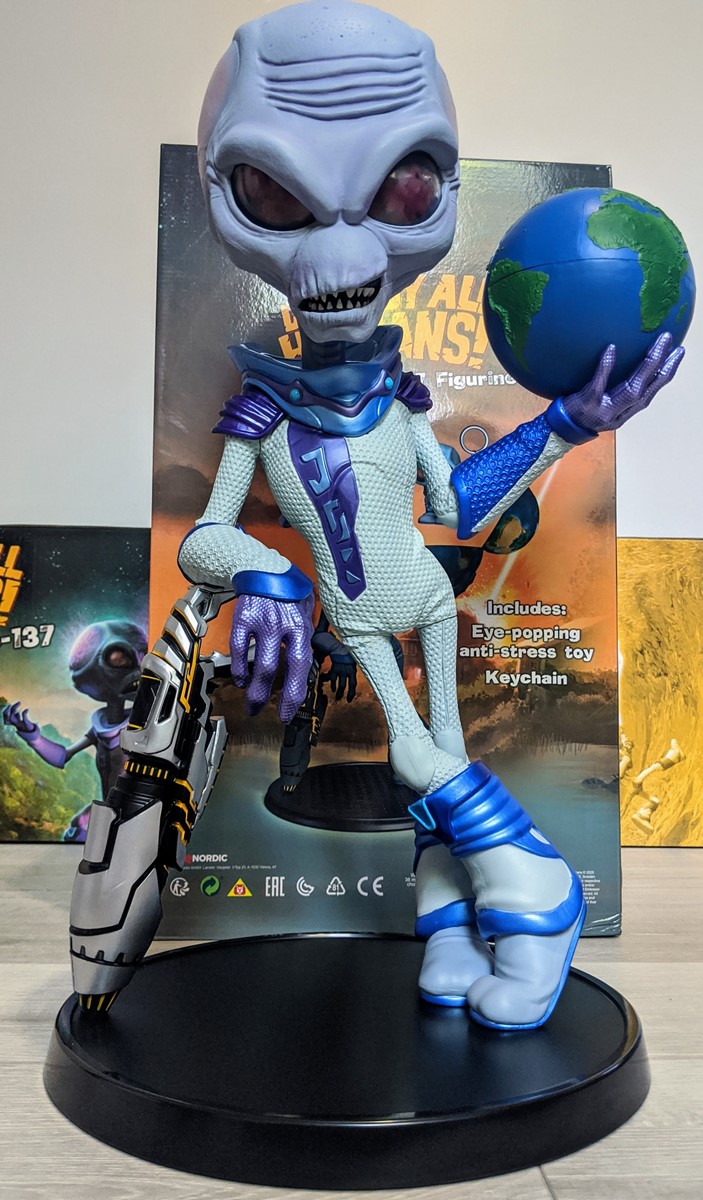 The most stunning collectible in this collection is the Crypto figurine. This is a humongous statue at 23 inches tall and features our antihero smirking and leaning on his gun while holding a mini Earth. This figure is not for the faint of heart and wouldn’t fit inside a bookcase. Anyone at all interested in this version first needs to figure out where the heck they’re gonna put this massive statue of Crypto. The statue features a tremendous attention to detail both on Crypto’s skin and outfit. For example, one slightly disturbing detail is his brain which shows through his skin on the sides of his head. The effect is creepily realistic. From the speckles on the top of his bulbous head, to his apparently two-toed feet, Crypto has never looked better. 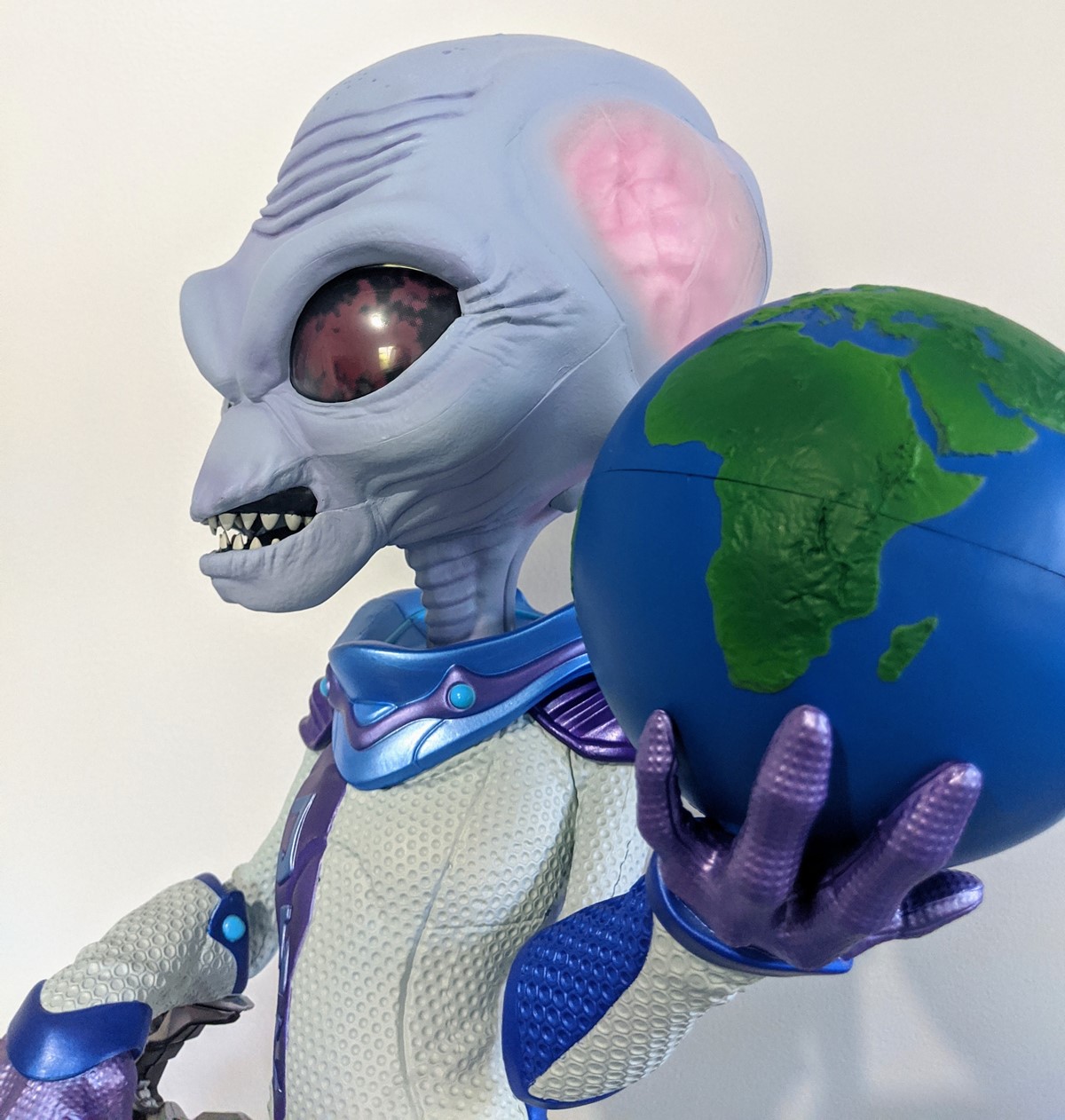 Crypto’s eyes stand out as well, not just for their large alien size but for their coloration which seems to shift in the light. While his skin is matte, his outfit features texturing and fun flourishes. This suit includes multiple shiny textures, such as the gloves which seem like they could be made of latex. The globe that Crypto holds is actually two pieces. The top comes off to reveal a hollow bowl for storing small items. The figure itself seems sturdy and doesn’t come apart in pieces. The only part which splits off is the top of the globe. Worried about it getting harmed in shipping? Unlikely as the entire figure comes encased snugly in form-fitting foam.

All in all, there’s a lot to like about both editions of Destroy All Humans! The biggest deciding factors are how much of a fan you are and how much space you have in your home — and how much you’re willing to spend. The DNA Collector’s Edition costs $149.99 which is about in line with other fancy special editions offering up figures. The Crypto-137 Edition’s price, on the other hand, is out of this world. At a suggested retail price of $399.99, only the most serious Destroy All Humans! loves are likely to strike. Still, it stands out as one of the most unique special editions in recent memory.