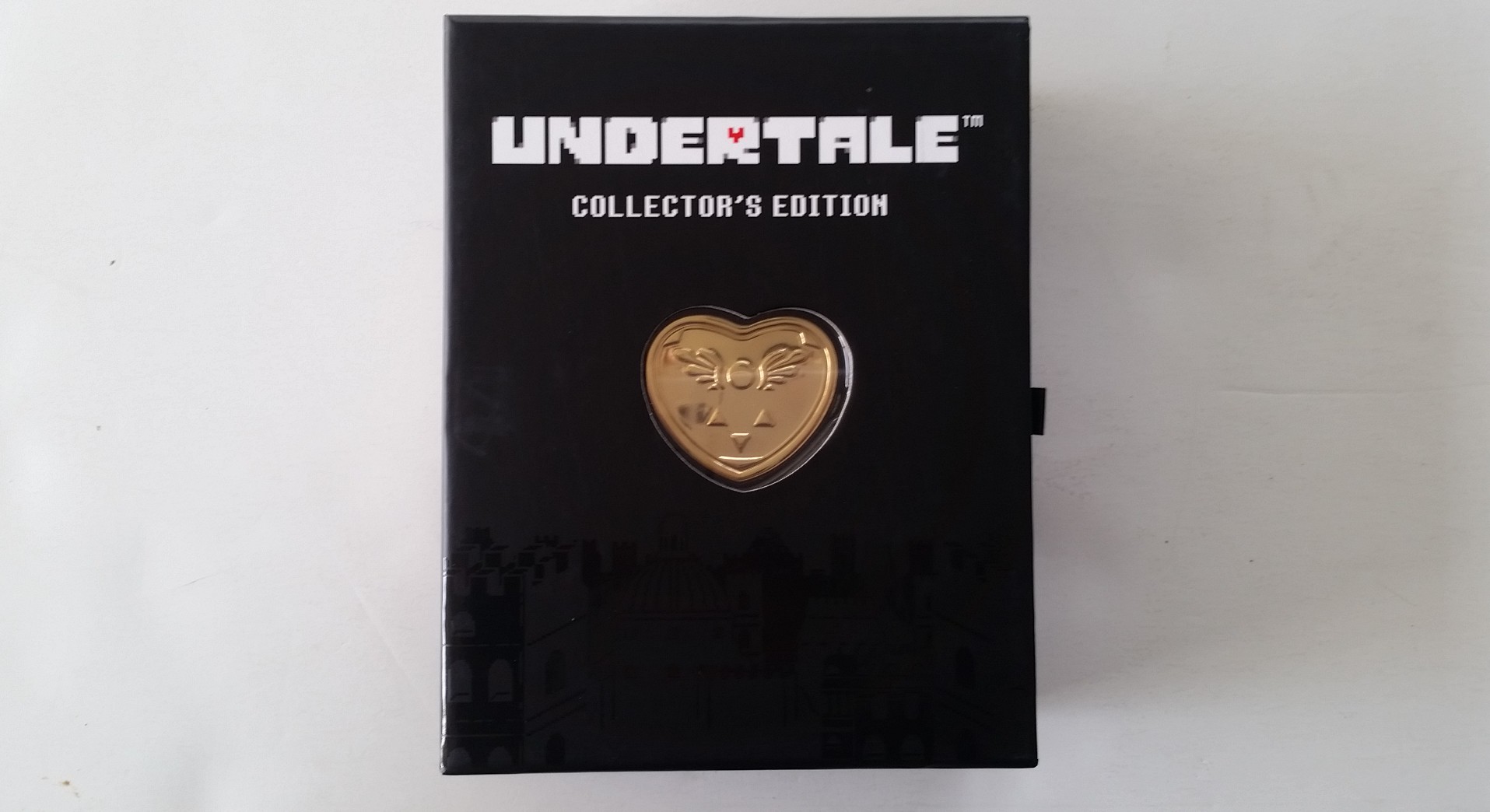 In 2015, Undertale launched on PC after a surprisingly successful Kickstarter campaign two years earlier. Immediately people caught wind that this was a very special sort of RPG. Since then, the game has made its way beyond PC to PS4 and PS Vita. As part of that move to consoles came six new physical editions produced by Fangamer. Spanning the PC, PS4 and PS Vita versions, it came in a Standard and Collector’s Edition. As might be expected, the Standard Edition at $25 offered a copy of the game itself. Plunking down $64 for the Collector’s Edition is where Fangamer’s talents at producing themed merchandise came into play.

The outer cardboard box itself is simplistic. It features a neat color coating on top of the black cardboard which showcases some town pixel art. Otherwise, though, it’s a subdued outer cover which teases what’s inside thanks to the heart-shaped cutout. Once opened up there are some cooler goodies to look forward to. The first thing you see upon sliding out the box is a lovely 14k gold-plated brass locket (which also happens to be a mini music box). This is the stand-out item of the set and makes a fantastic first impression. Spinning the crank on the back brings the music box to life. You can watch the mechanism run while the locket is opened or close it and simply enjoy the melody. 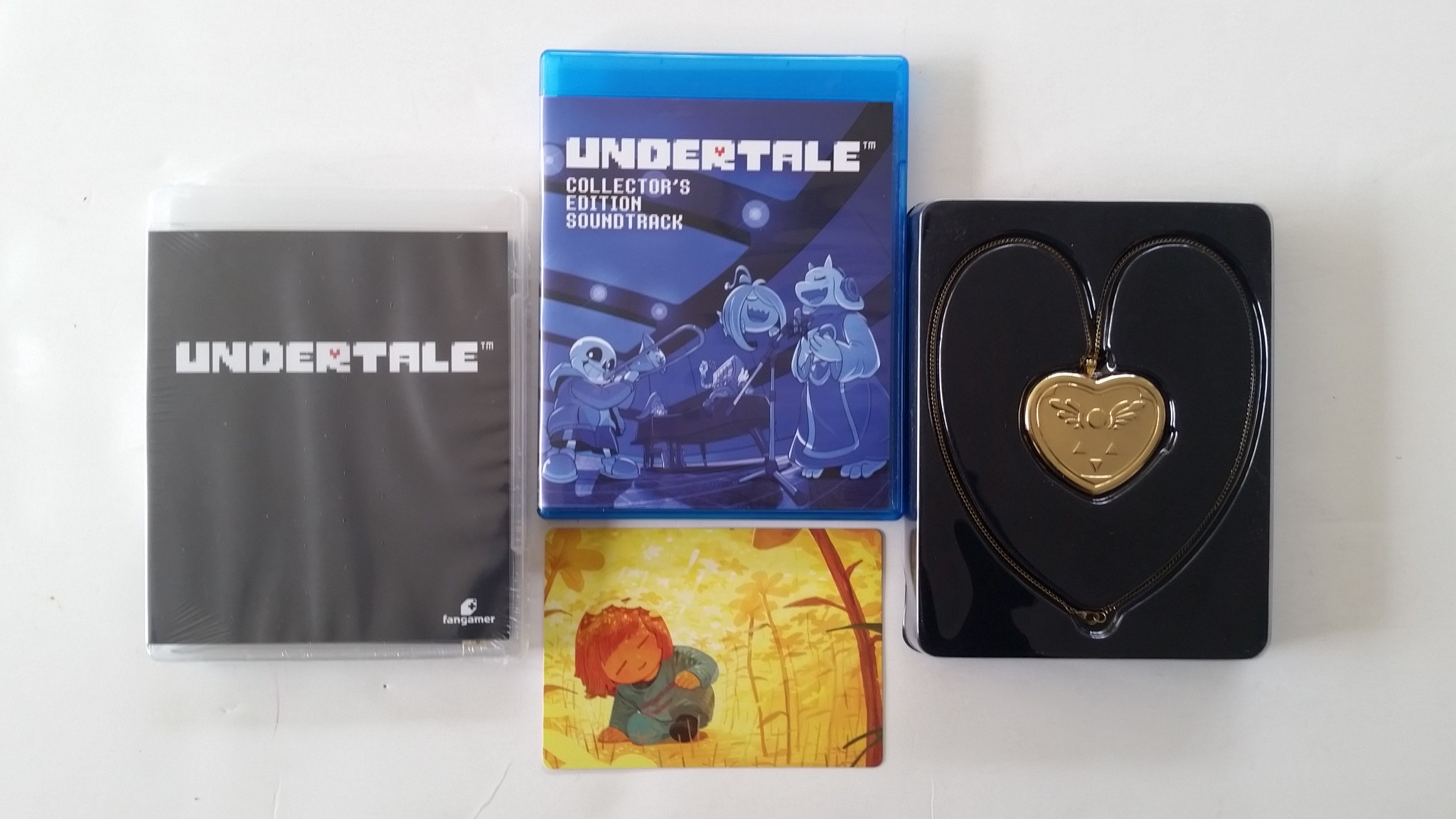 Once the locket and its shell have been removed from the box you gain access to the rest of the Collector’s Edition. These additional contents include a collector’s edition soundtrack in a Blu-Ray style box, a postcard featuring artwork from 2gold, a sticker, and a physical copy of Undertale itself. It’s very strange to see that the copy of Undertale was given a different cover for PC. Both PS4 and PS Vita’s cover mimics the cityscape art on the outer cover for the Collector’s Edition. However, the PC game has a pure black cover with only logos on the front. It’s a weird choice and doesn’t look good. At least there is a 24 page story pamphlet included inside.

The soundtrack comes with two discs. This means you’ve got access to the complete soundtrack (which is over 100 songs). A digital download is not included, but most Undertale megafans probably already have the soundtrack digitally to begin with. Why did the soundtrack come in a large case instead of typical CD case? That’s to make room for a sheet music booklet. It features some key song sheet music along with notes from Toby Fox. Although this was a cool gesture, the layout could use some work. For example, opening up one song on the first page does not continue on the second. Instead, it’s kind of like a newspaper layout where the song picks up again a few pages later. Suffice it to say that folks may have a hard time using the sheet music as designed to play their favorite tracks. 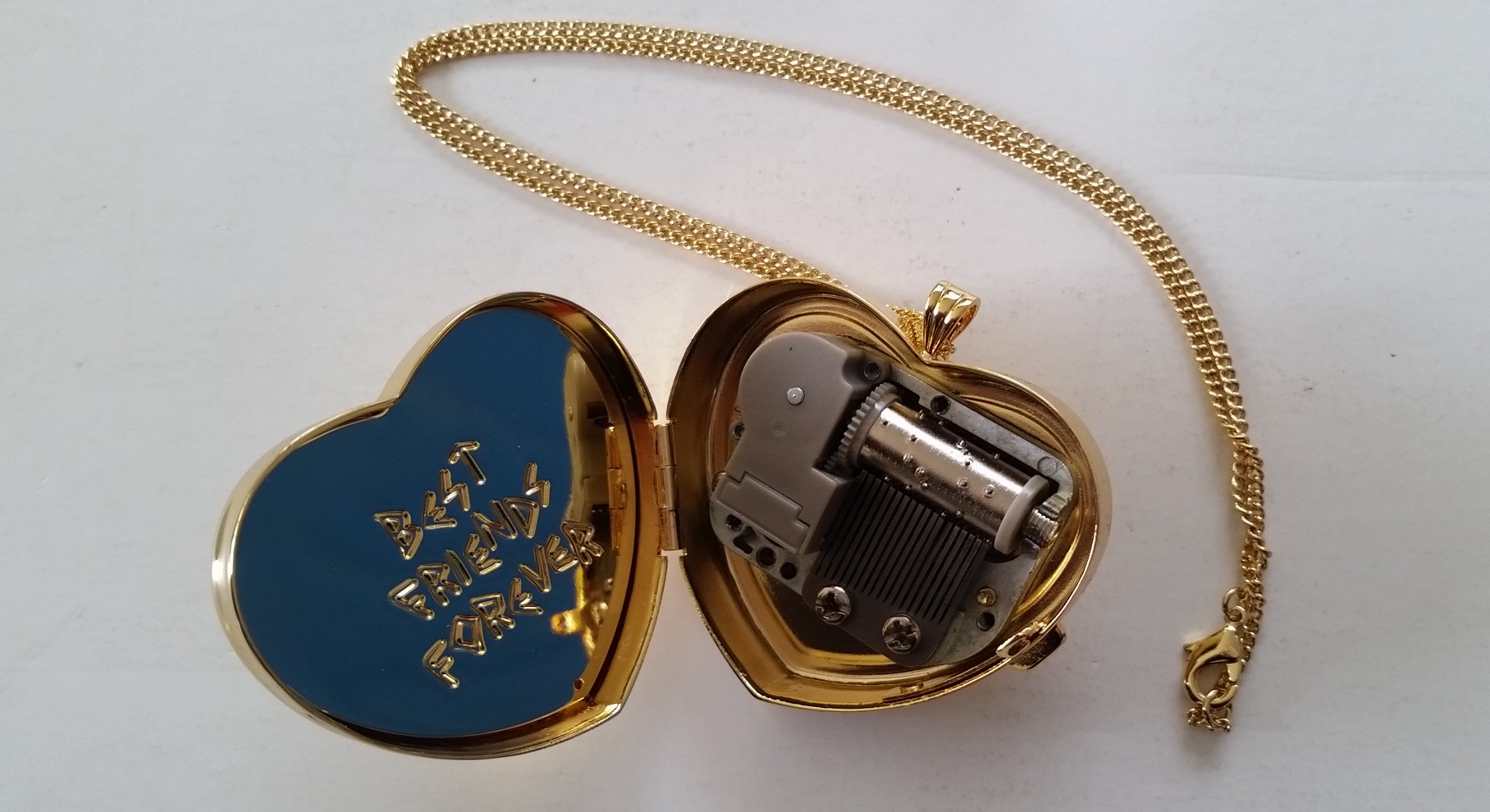 Initially, the Undertale fanbase rushed to pre-order the Undertale Collector’s Edition. So much so that it sold out and Fangamer needed to prep another batch. Even so, it appears this is not truly a limited collectible (yet). Right now the PS Vita Collector’s Edition is still available in stock. The PS4 and PC copies are out, but another production run is set for mid-March. As such, interested parties should still be able to snap up a copy without resorting to ridiculous eBay listings.

Is this edition worth it for $64? If not for the golden locket, they would be asking for way too much money for what amounts to a fairly standard collection (game, soundtrack, art card). The locket steps things up, however, and is almost certainly a must have for serious fans. Since this isn’t a common addition to a special edition, it’s hard to even grasp what it’s actually worth. Maybe these music box mechanisms are super cheap, but it’s a cool collectible. Folks who don’t want the cute locket should feel free to pick up the Standard Edition instead. It’s a lot cheaper and still offers a copy of Undertale you can place on your shelf.