Back in the sepia-toned days of my youth, before the advent of this new-fangled internets all you crazy kids get so worked up about, the secrets of games was the school yard commodity of choice. The kid who knew how to get that whistle in Super Mario Bros. 3 had some serious cache. Do you know how to make your way through that stupid maze in Metal Gear? There is some sway to be held. We kids (okay, boys) would spend whatever time was not already being spent tormenting each other trading these prized nuggets back and forth. After leaving grade school, I have not had the opportunity to recapture that feeling; something we were simultaneously working together to learn while competing to find the best way to win (okay, that’s not quite true; the subject of girls reached a similar fervor in high school). The continuing conversations that I had witnessed and heard over the last few years regarding the Souls games brought back memories of the grade school days. Yes, many of the answers can now be found online, but I had seen players in real life take joy in figuring things out themselves or with the help of close friends. It was this enthusiasm that brought me to try out Dark Souls. I started with the second, as I found the special edition on sale for less than twenty dollars. 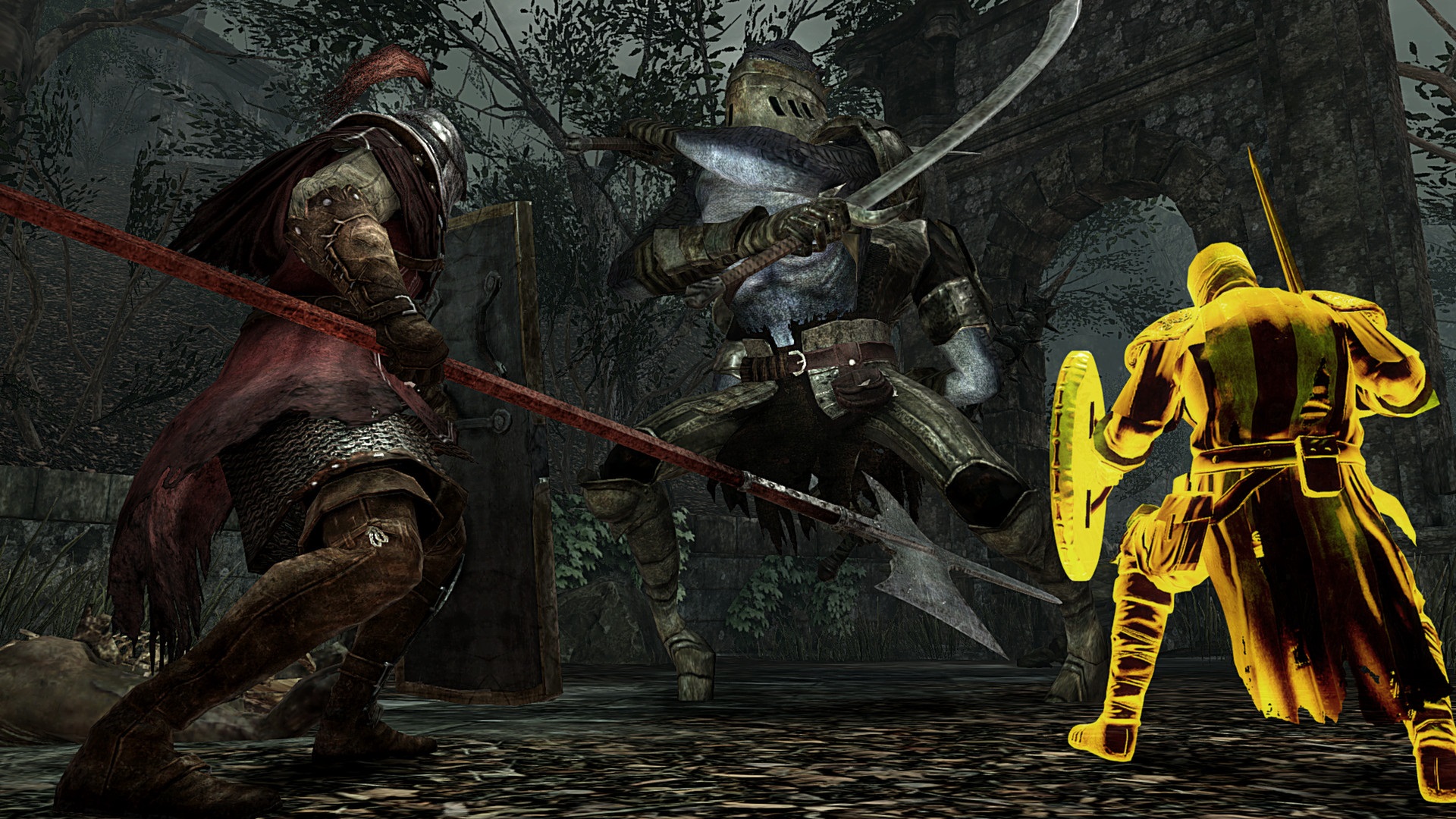 Reflecting on the time I had spent with this gem, I would actually equate the experience to be closer to an adolescent’s first experiences with romantic intimacy. There was lots of lost fumbling in the dark, sweaty hands fidgeting in the attempt to gain access to things he for which he was not ready, and the frustration of being shut down right when success seemed possible.

One should address this reputation that the Souls games are unforgiving but fair. I say this: horse freaking plop. This all comes down to my difficulty with the dodging. The enemies telegraph their attacks very well. If I over-committed to the incorrect move, and am not able to cancel out and dodge out of the way, fine. I am cool with that, and there were times this system nailed me for being stupid. However, my experience with the controls has lead me to believe that there are unpredictable lag issues with the second title. There were times when I attempted to dodge, at full stamina mind you, to have it not respond, or respond a crucial half second or more late. At first, I thought this might have been by design, so I attempted to compensate for it. This resulted in immediate movement when inputted, meaning it was mistimed, and my poor character became so much strawberry jelly beneath the over sized sword of an old knight. One thing to stress, this was while playing a lightly armored build, as I picked up that was needed to avoid getting squished. 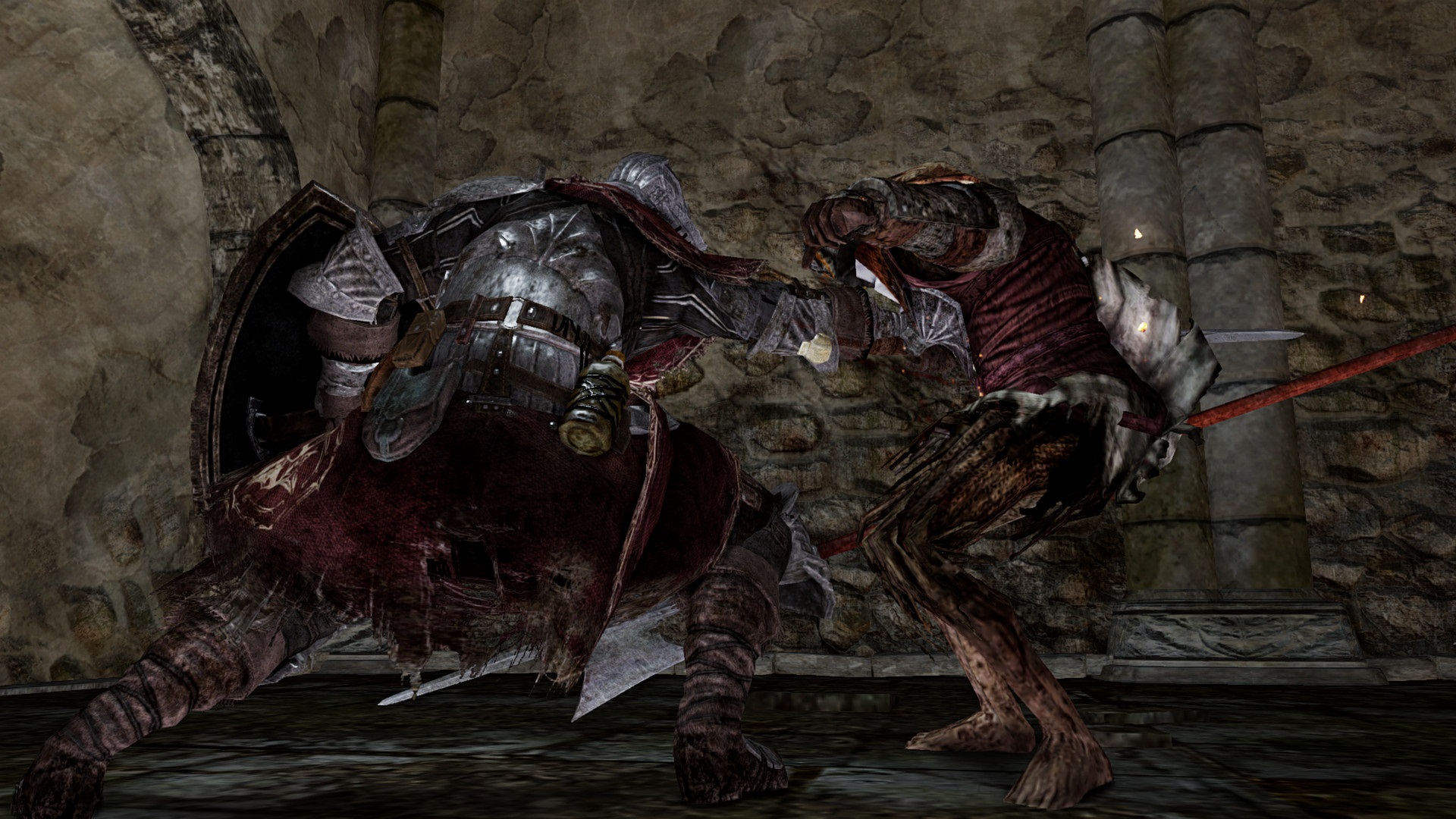 Along with these input issues is the “hollowing” system. Look, I get that there should be a fail state, something that should push the player into careful consideration of moves and decisions. Throwing attempt after attempt of careless buffoonery to brute force my way through the challenges is not the experience the FromSoftware wanted to create. Therefore, taking my souls away and making me need to survive back to where I lost them in order to recover my progress is great. The ridiculous system of lowering max health points, however, is just mean. Yes, I realize I can repair the damage with a human effigy. Yes, the Ring of Binding mitigates how bad this can get. Yes, there are other items found in game that offer some other protection from this. This whole concept still pisses me off, all these years later. Instead of a rough lover, this is more akin to an angry father coming across a tearful child and proclaiming “Do you want to cry? I’ll give you something to cry about.”

And yet, like that poor kid,  I couldn’t stay mad at it. Dark Souls II does offer me the freedom to screw up and do so royally. After clearing the tutorial, I went down to the beach in the same area to see what that giant ghost looking thing by the row boat was. The fact that he had a friend who proceeded to pick me up and gnaw on my head like I was a stubborn bag of chips that wouldn’t open was a result of my carelessness. I learned from it. But not well enough as, after visiting the hub town, I wandered and ended up in Heide’s Tower of Flame. Oh, how the cruel, absent gods must have laughed as I attempted to truly figure this area out while pondering why the developer thought it would be fun for the enemies here to take so many darned hits to put down. Only after giving up and finally stumbling across the Forest of Fallen Giants did I realize I went drastically out of order. 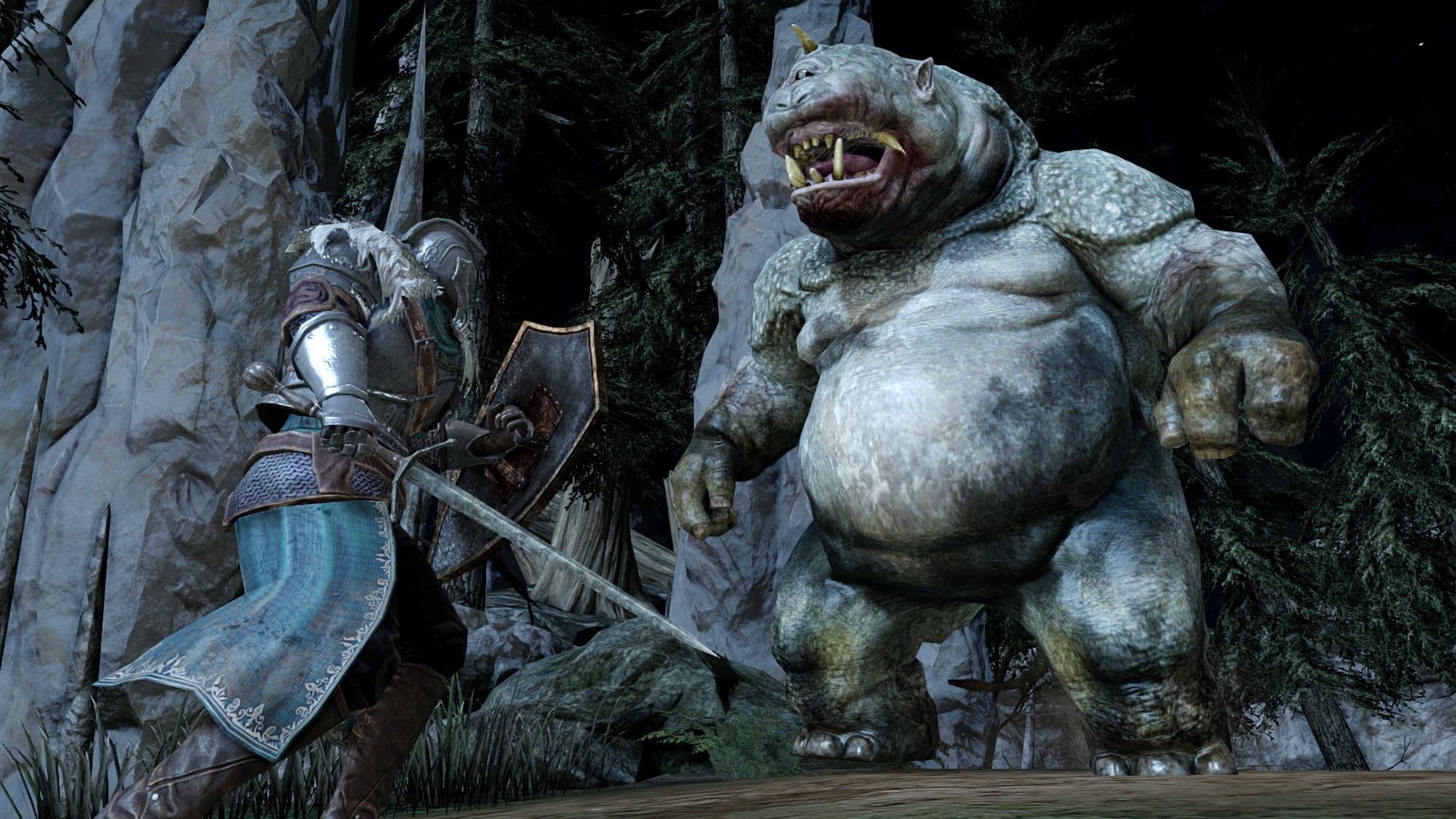 To give the game all credit it’s due, I must say that my most spectacular failure is also one of my standout best gaming moments ever.  I was attacked by a red invader who sought to do me harm. He lunged at me by the bonfire in the chamber next to Melentia. I am proud to say that I was holding my own pretty well, weaving in to deal blows and ducking out to avoid the repercussions. The adversary was down to around a quarter to a third health left while I was still around seventy five percent. Feeling cocky, I was talking to the TV: “What? What? You think you can take me?” The other player dashed in to strike. I moved back a step to avoid. “What? Whaaaaaa!” That is when I discovered what it was like to roleplay a pile of broken bones on the pathway that was meant to be accessed via a ladder.

Over time, I began to truly learn the ins and outs of how to handle this game, though the third one is where all of the rough patches from Demon’s Souls and Dark Souls 1 and 2 were smoothed out. Through heavy amounts of stubborn effort and just this feeling that I just had to “get it,” I managed to polish it off. The titular flaw comes down to the fact that this title brutalizes the learning player with little indication regarding how to truly “git gud.” Bloodborne and Dark Souls 3 actually provided a better ramp before getting down to the face stomping, and it made it the best place for newcomers to start. Still, I ravaged Dark Souls II’s No Man’s Wharf. That was pretty cool.