Anyway, we play stuff together. So I thought I would write about it from time to time.

I’ve been a long time fan of Project Zomboid.  For those that haven’t played/heard of/seen PZ, it’s an isometric zombie apocalypse survival game. “Another zombie survival game?” I hear you ask. Well, yeah, it is another game in a genre that has been utterly inundated with absolute crap in recent years, but Project Zomboid is a solid entry into the genre and it does a few little things differently. 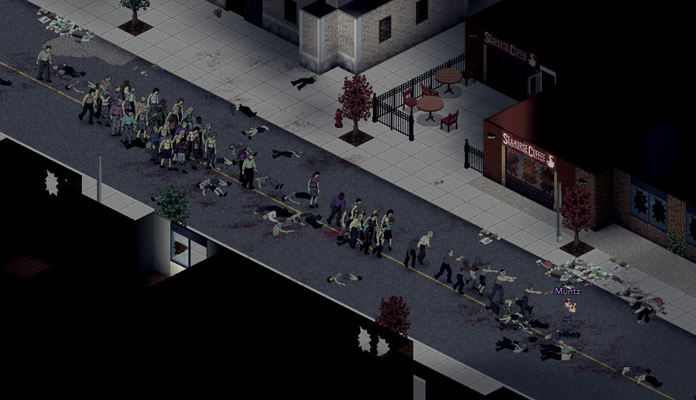 Just a regular walk through the streets of Project Zomboid

Whenever I’ve had a bout of PZ fever, I’ve always played it solo. Wandering the streets of Muldrough and West Point, enjoying myself immensely and leveling up my skills to become a master carpenter/fisherman/ until my character’s inevitable death. At that point, I generally stop playing and move onto something else. You see, Project Zomboid has a permadeath mechanic that hurts. Much like games such as DayZ, Project Zomboid has the player losing their entire inventory when they die, however, remember how I mentioned that you can level up your skills? Well, if you die, those skills are gone. Gone. Hence, the reason I would play PZ in spurts. Often, the loss of those skills is what drove me away.

So anyway, this time I played the game with Sandra. We set up a little private server (after a few hours of frustration), painstakingly created our characters using PZ’s negative and positive trait system and set out into the world of Project Zomboid as a Lumberjack and Nurse couple.

The first thing I want to make clear is that Sandra is utterly terrible at this game. In the time we’ve been playing, I think she has at least twenty deaths to my three. I seriously don’t even know how she manages to get infected so much. To make it worse, I’ve had to put her out of her misery at least five or six times, axing her in the face outside our shelter. Not to mention the time she wandered into the backyard to die, only for her corpse to rise again and attack me while I was crafting a water barrel. Good times. Oh, and one of my deaths was entirely her fault, just so you know.

So Sandra got pretty good at creating characters. I mentioned the positive negative trait aspect earlier. So, if you want to make a super strong or smart character, they have to have some kind of deficiency also. This led to Sandra deciding that she wanted a good looter. So eventually, after a dozen or so deaths, she finally refined her character into an organised, athletic and dextrous burglar who is great at sneaking, seeing in the dark, and carrying stuff. The character is also highly prone to illness, thin skinned, unlucky and illiterate, all the while needing to sleep more often than a normal person. In other words, Sandra has created a disposable human sack. 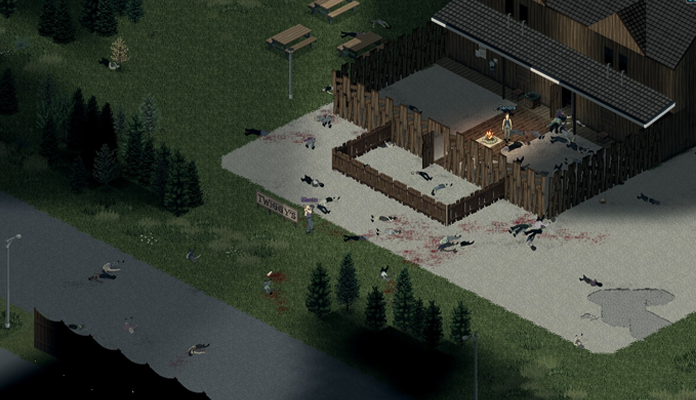 While she is off dying, I’m skulking about near the bar we’ve occupied as our home; chopping down trees, clearing zombies, etc. You know, doing stuff that is actually useful. Stuff like not dying. I’m reading books about carpentry, I’m building stuff left and right. I built a wall around our place, then I built a fence around the wall. I locked it down. No zombies getting in whatsoever. Tight, secure, safe. Then some dude named Cody walks in and stares at us for about a minute before saying “Hi”.  Sandra greeted him and I panicked and shut down the server.  Turns out, we hadn’t put a password on it and any random could join. Sorry about that Cody. Nothing personal.

Resources in PZ are finite, houses stay looted, the water shuts off, food rots. You have to venture further and further to get supplies. This has led to some really tense moments. One especially came to mind when the human sack let me know that she had found a fuel powered generator and could only walk slowly while carrying it. This meant that I had to sneak through town and escort her through the wandering hordes of zombies as she dragged the generator back to our abode. We eventually got it there without either of us dying. It provided one of those rare moments of satisfaction that games can give you sometimes. You know, the good games.

Header image by Evilmonk77. You can find him here!