I’m sorry! It’s about Dark Souls 2 again! Although, it’s really more about this weird scenario that happens to involve the game.

(Very Mild Spoilers Regarding the Ending of Dark Souls II: Scholar of the First Sin Ahead)

No story elements are revealed, just some details of the process.

To set the scene:  I’ve written in previous GwmG’s about successfully converting Sandra into a Dark Souls fan. That is still a thing.  She has played over 140 hours in Dark Souls II: Scholar of the First Sin. She found everything possible on NG, completed all of the DLC, beat every boss, etc.  With all of that in mind, she wanted to share the final moments of her initial campaign with me.  So, as she defeated the last bosses and finally, the game’s namesake Aldia Scholar of the First Sin, she called me over to share the joy of finally completing the game.  So I plonk down on the couch beside her as she smacks the guy in the face with a massive sword for the last time.  A small cutscene plays out, opening the path to the ending.  Without giving too much detail: she was offered a choice. Maybe this choice wasn’t incredibly important to some, but to others it represents a lot.  It is the physical translation of the mood the game has set for the individual player; it is the culmination of hours of playing; it is the final confirmation of a series of answers given by the character at various points in the game.  Sandra is one of those to whom the choice matters.

The cutscene ends and a shining light appears in front of her character. A suggestion is made by the narrative as to the next actions.  This is the point where I, in my excitement, broadcast an irresistibly enthusiastic and excited expression of the need for her character to do exactly what the narrative had suggested. At this point, neither of us realized that this was the point that the all-important choice would be made. As the action is taken, the camera swings to show the ability to choose differently.  The result of our collectively misguided decision? The game’s decisive conclusion.  Stuff happened and Sandra’s character was doomed to an action that did not fit the way Sandra had envisaged her from the beginning.  After more than 140 hours, the character’s actions completely disregarded all previous behaviors and decisions. After more than 140 hours, the entirety of Sandra’s portrayal of her character was rendered completely irrelevant.

She was understandably upset.  Not angry; despondent. She had previously been excited for NG+ (a sort of Hard mode with new content that is unlocked by completing the game), speaking of things she wanted to do before activating it.  She had been excited about playing Bloodborne, and even more so for the upcoming Dark Souls III.  Now, she indicated a complete loss of enthusiasm. She indicated that, her experience ending as it did, she no longer saw the point. My fears that I expressed about my actions in the very first GwmG had come to pass.  I had contributed to ruining Dark Souls for her.

Beginning on that Friday night, I used Sandra’s absence (dance practice) to begin my campaign.  Under the guise of needing hard-drive space, I asked if she planned on playing DS2 again. With the answer being “no,” I went to work.  What followed was a weekend of trickery, deceit, isolation and tireless labor. 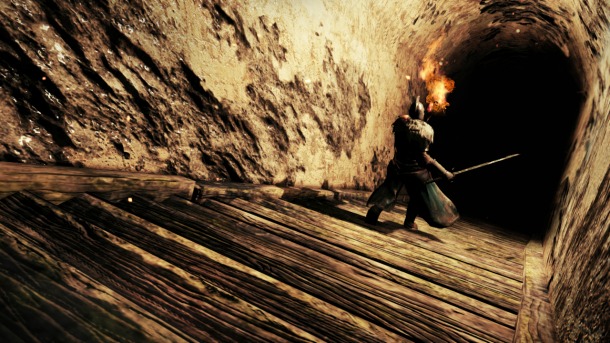 I was adventuring upon a dark and difficult path.

My intention was to fix things.  I wanted to get her character back to that all important point.  I wanted to return her to that critical decision so that she could redeem herself.  I also wanted to get it done by the conclusion of the weekend.  To do this, I needed to complete NG+.  Hard mode.  It should be simple, right?  Well.  NG+ has harder enemies. It also has more enemies. They hit harder, take more hits, and are just nastier all round.  Furthermore, a number of boss fights are altered, of course making them more difficult.  Awesome (apply sarcasm font).

Now, if you do your research, there is actually a massive shortcut for completing NG+ if you have saved certain things from your initial play-through.  As it turns out, that shortcut didn’t apply.  To even have the ability to make the necessary choice at the end, I needed to go the long way.  I even needed to do some extra stuff.  Again, awesome.

To make this all the more difficult, I needed to do this without Sandra finding out what I was up to.  Firstly, for the surprise. Secondly, because I honestly didn’t think she would want me doing it until I had already finished.  Keeping her in the dark was never going to be easy.  Both of us were home all weekend (apart from that first Friday) in a small apartment. I needed the PS4 and the TV for a long period of time.  Claiming that I was playing Bloodborne, I began my deceit.  The deception consisted of a  a variety of frantic scrabbling to get the PS menu up and onto something not DS2 related whenever Sandra approached view of the TV.  I also had to play the game with a wireless headset to negate any chance that she would recognize the sounds.  I nearly died deep into a boss fight because I had to frantically plug the charger into a fast expiring headset lest the sound switch to the external speakers as the battery died. I also had to completely surrender more than one boss fight in order to bring up the PS menu (DS2 cannot be paused).  Finally, I had to let Sandra think I was a bit of a dick.  Well, more-so than usual.  She wanted to play the game that I was intending to write about in this piece, while I needed to finish my undertaking.  From her perspective, I preferred to play Bloodborne by myself for the entire weekend rather than play a potentially fun co-op game with her. Furthermore, I wasn’t coming to bed. Instead, I played late into both Friday and Saturday nights.

In the end, I did it.  I returned her character to the final boss fights at about 9PM on Sunday. I hadn’t completed NG+ anywhere near the extent that she had in her playthrough, but I believed it could be enough.  Even then, I was cautious. I truly didn’t know if it would reignite her interest. Hoping that it wouldn’t all be in vain, I positioned the character at the entrance to the final sequence and called her over.  As she approached, I asked if maybe she wanted to “fight the last boss for me.”  She looked at me quizzically, obvious not grasping that I hadn’t actually been playing Bloodborne.  As I disabled my headset and the sound kicked in, providing a bit more context, she suddenly realized.

To avoid a lengthy and emotional (eww, emotions) recounting of the following moments, I’ll summarize. It worked.  She was excited.  She spent the next minutes fighting and defeating the final encounters of the game.  Then, she finally made the choice that fit her character.  Now, she is content in the world of Dark Souls. Excited once more to play Bloodborne, hyped to play the upcoming Dark Souls III.  Success. It was worth it.

Initially, I wasn’t going to write about this whole sequence of events. Instead, I was going to write about ARK: Survival Evolved.  We’ve been playing that a fair bit together and I had some thoughts about it. This, however, was a weird and unexpected scenario that would be impossible in other circumstances.  The shared excitement and disappointment; my guilt and subsequent intent on redemption; it’s all unique to having a relationship with someone who plays games. I can’t help but believe that someone who hadn’t played games wouldn’t understand the disappointment that Sandra experienced.  I don’t believe they could understand it. They certainly wouldn’t have felt the guilt that I did. After all, it’s just video games.