For some reason, people love playing bad online multiplayer survival games that are perpetually in early access. These games are almost always technically poor and yet they somehow entertain us for absolutely silly amounts of time. I personally played countless hours of DayZ when it was still an Arma 2 mod. Even with the bugs and glitches, the erratic animations and all the (frequent) frustrations associated, I almost always enjoyed myself. Sandra also played DayZmod extensively.

So when someone told us about a game that was “like DayZ and Minecraft put together but with dinosaurs” we had to at least try it. Well, Ark is nothing like Minecraft and only a little bit like DayZ. Nevertheless, we’ve had some enjoyment with it. Hosting our own private server that’s populated with only a few friends, we’ve managed to avoid the rampant deathmatching and griefing that is usually associated with these online multiplayer survival experiences.

Together we’ve struggled through punching trees (and Dodos), running endlessly from huge birds that seem intent on killing anything and everything, and building shelter. We’ve built a life among the dinosaurs. Our tribe, The Hard Spear Kin, has become prosperous. “Our spears are always hard.” 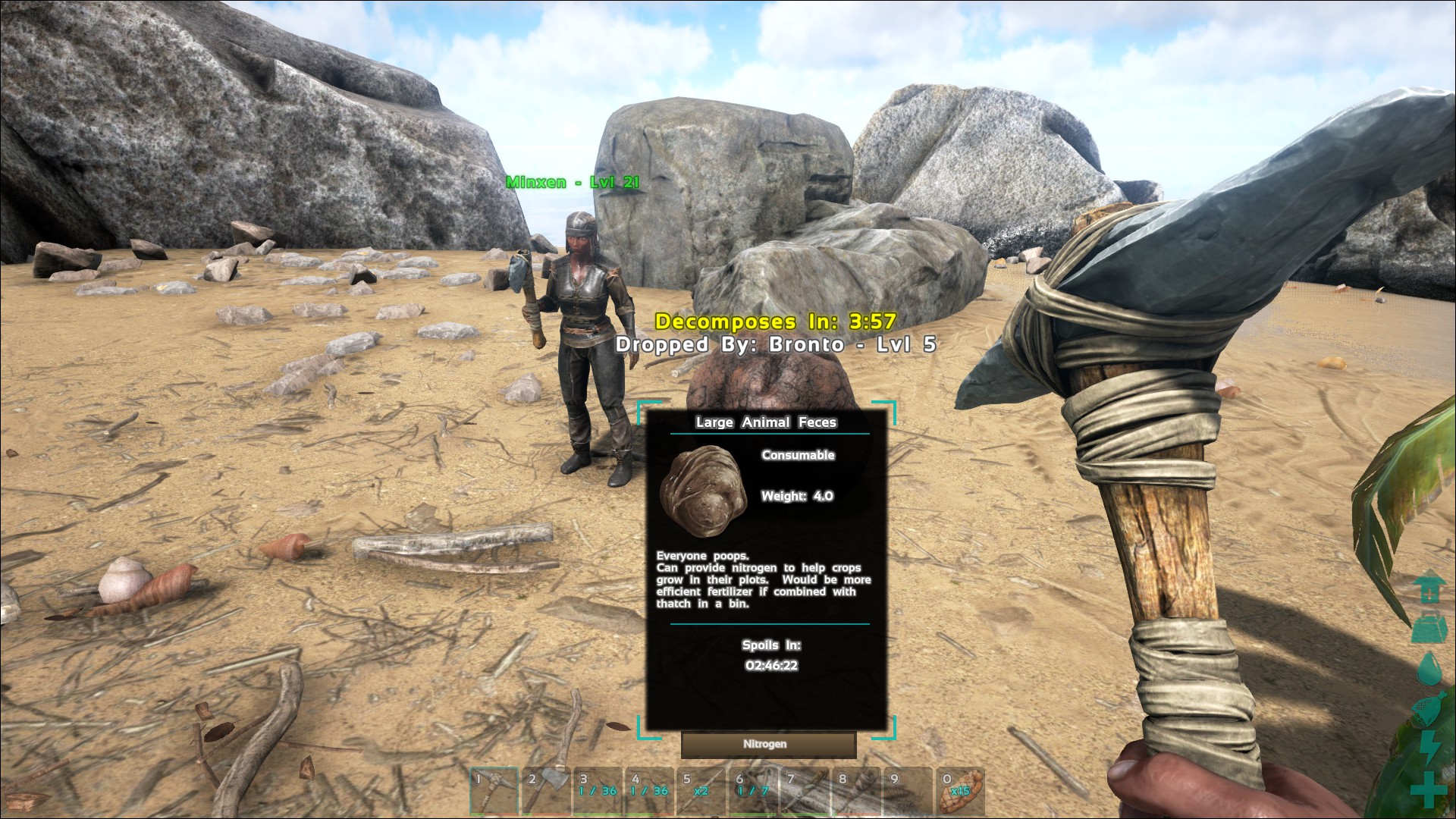 Ark: Survival Evolved is full of fun things to discover!

Our cabin was erected (The Hard Spear Kin doesn’t ‘build’. We ‘erect’) high on a cliff above the sea. A beautiful setting. On one side a beach filled with trees and rocks perfect for resource gathering; on the other side lies what appears another simple beach. However, this second beach is slightly different. A beautiful waterfall overlooks a valley containing a small forest that surrounds a gigantic protruding rock. In this forest, around the rock and in the river feeding the waterfall, a multitude of predators lay in wait for an unsuspecting tribesperson. It is this valley that forced us to unite our collective effort and prevail against the odds. We made an outpost, we set traps, and we worked hard. Insert montage. 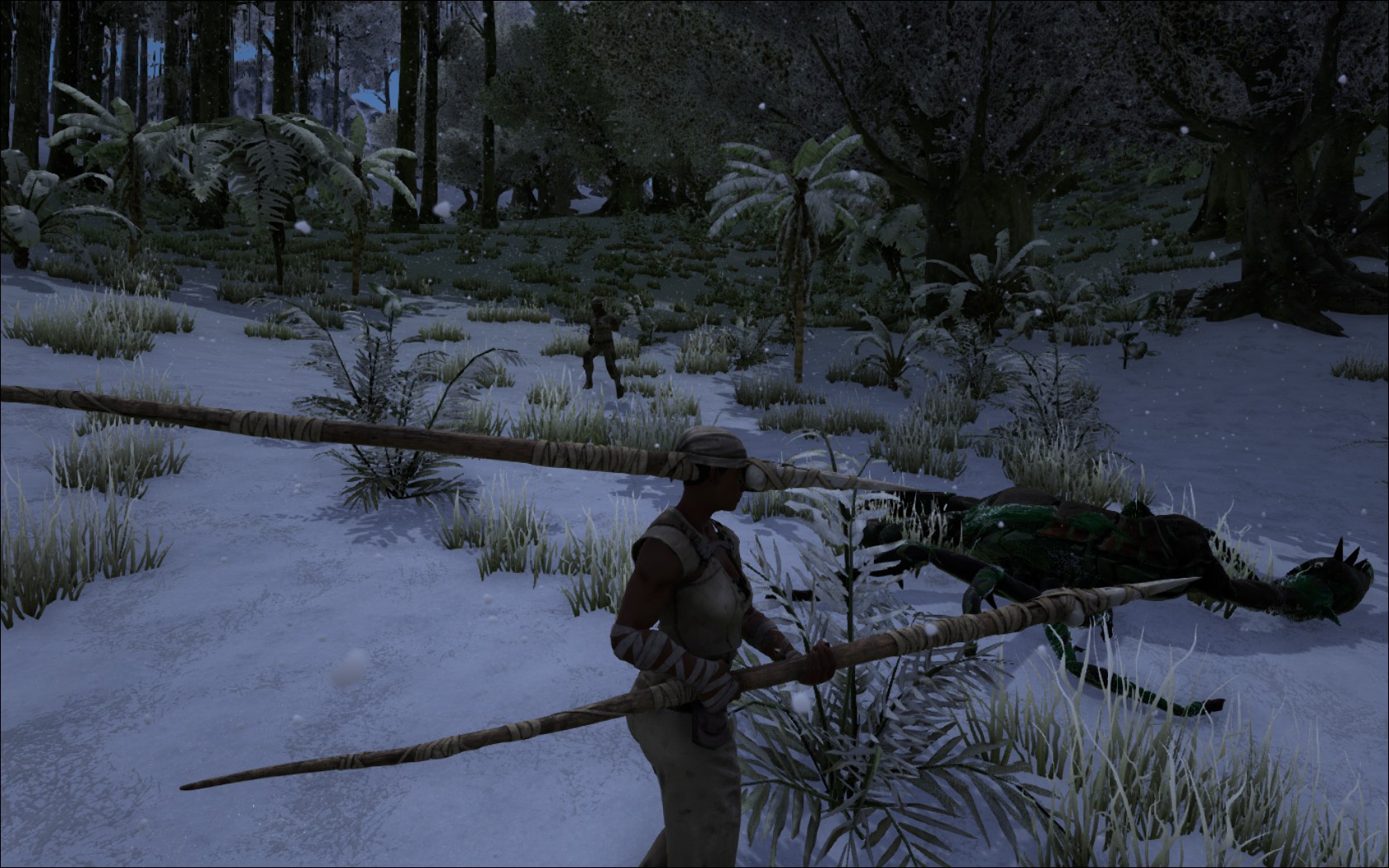 Hunting together can be lots of fun!

Eventually, we became dinosaur killing machines. We poked with our spears (hard spears) and we shot with our bows. Dodos were small fry now. We could take the huge psychopathic birds down with ease. Nothing could stand in our way.  Okay, maybe the pack of Sabertooths that constantly roamed the area could screw our day a little bit. Then we saw it. A T-Rex. Every kid’s dream. So we made our plans. We set up a trap consisting of huge spiked logs forming a makeshift funnel with a gap that a person could fit through. Then we built towers just beyond the trap that we could stand on and shower our wrath upon the entrapped dinosaur. After baiting the T-Rex and running like hell to the trap, the massive predator impaled itself on the spikes and we went to work. Eventually, we did it. We killed the big bastard. The Hard Spear Kin had defeated the mighty T-Rex. Our spears are truly the hardest in the land. How else could we claim victory against the greatest predator in the history of the world? We found out some time later that the game actually has a bigger predator called the Gigaimaprickasaurus or something. Either way, we had done something rad. 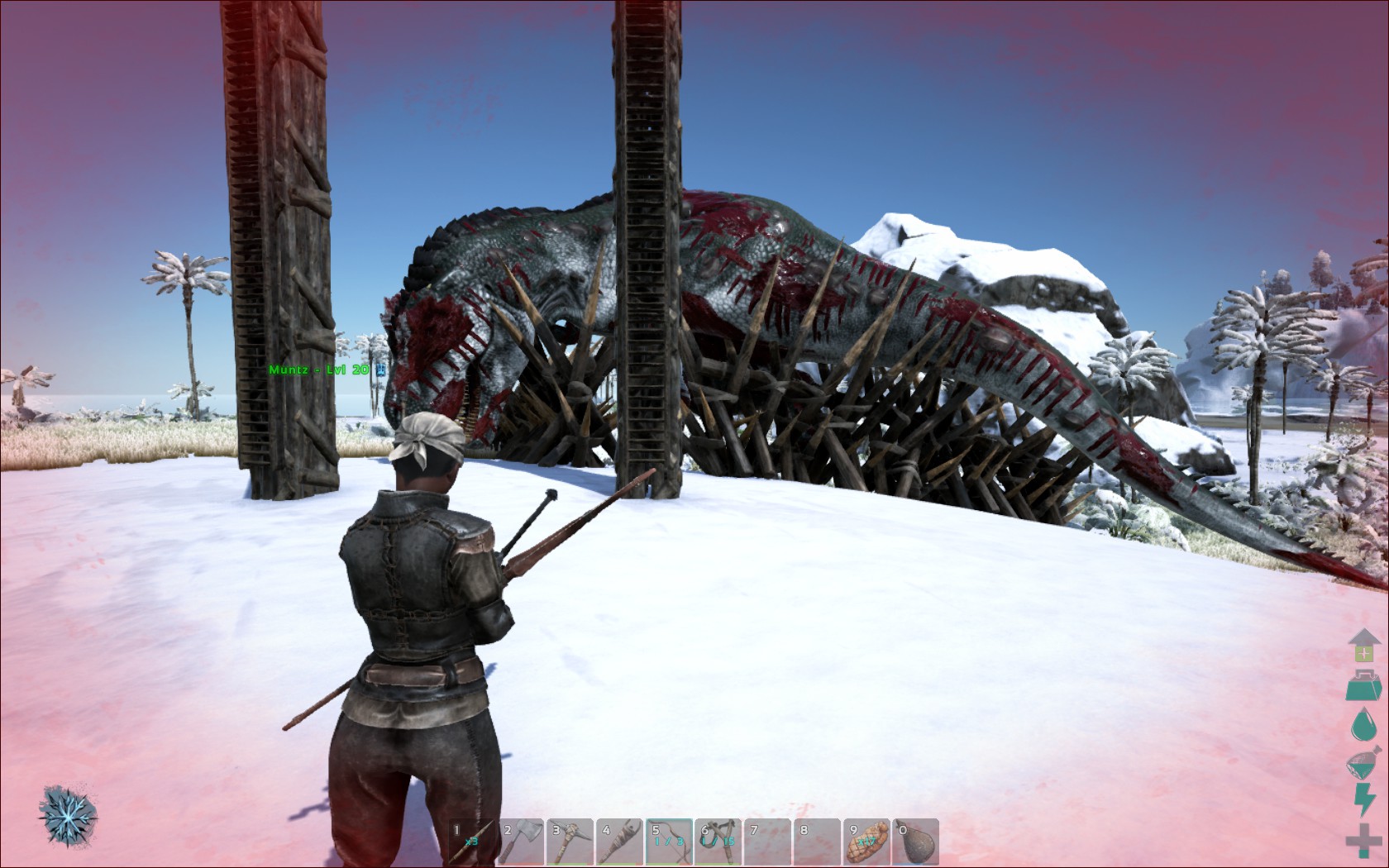 The Hard Spear Kin went really hard at the T-Rex.

After that harrowing experience, we could do anything. Currently riding our two raptors (named Frej and Freja), we ride in front of an army of little mini raptors that spit poison like the thing that killed the chubby annoying guy in Jurassic Park.

In all seriousness, though, Ark: Survival Evolved has given us a few fantastic memories. From making the aforementioned T-Rex battle towers slightly too low (the T-Rex actually reached over the spikes at one point and knocked Sandra off her tower), to spending hours gearing up for an ‘epic trek’, only to head up the hill a bit and spend the next hour camped on a rock with a group of raptors trying to eat us. It’s been fun working together to build a hut and keep our poison spitting horde fed. It has been an truly romantic experience worthy of Valentine’s Day. The automatic pooing mechanic only adds to the wonderment. Okay, maybe it hasn’t been so romantic, but it has been fun. So if you have a girlfriend that likes survival games, dinosaurs, and dying a stupid amount of times (good luck), then pick up Ark: Survival Evolved and give it a whirl.