My girlfriend Sandra is a gamer and I have to say; it’s pretty f–ing awesome.  She has been PC gaming for her entire life.  While this does rate her highly in hardcoreness, it also means that she is completely crap at console games…for now.

Anyway; we play stuff together. So I thought I would write about it from time to time. Today’s musings are about:

I am a huge fan of the Souls games. The first Dark Souls is among my all-time faves. I won’t tell you the others on the list because I don’t want you all to judge me. Anyway, for whatever reason, I hadn’t a chance to play much of Dark Souls II until recently (I had played about 10 hours previously of the Xbox 360 version).  So I decided that I wanted to play it with Sandra.  Because, you know; I like to share things that I enjoy (or force them upon people).

So we boot up the PS4, throw in the disk and get comfortable on the couch.  The game starts up and I hand the controller to Sandra.  She looks at me quizzically “what?  I’m not playing this” she blurts.  I ignore her and sit back, smirking.

You see, my plan was that she would try to play the game, fail utterly, and then be amazed and appreciative of my awesomeness once I took over and used my previous experience to dominate.  Because you know, chicks  probably dig that. Anyway, what I hadn’t expected was for her to own it.

After making a character (she made a chunky woman that can hit stuff good) and moving through the tutorial (which is quite difficult for a newcomer) flawlessly; she moves on to the nexus point of DS2, Majula.  After talking to a few NPCs and finding some stuff, she heads down the “wrong” way.  At this point I am smugly giving her little to no instruction when it comes to direction.  Because I’m cool like that.

So she plods down these ominous looking stairs and wades through a scummy waterway, eventually walking through an arch and out into the picturesque Heide’s Tower of Flame.  Now I feel like I should tell you a little about this place in case you haven’t been there.   Heide’s Tower of Flame is a beautiful formation of towers that pushes out into a violent crashing sea. It’s pretty spectacular. It is also the home of a bunch of giant dudes with massive clubs, swords and all kinds of evil crap.  Oh, and a dragon.  A huge, dragon that breathes fire ‘n’ stuff.  So yeah, pretty fun place. 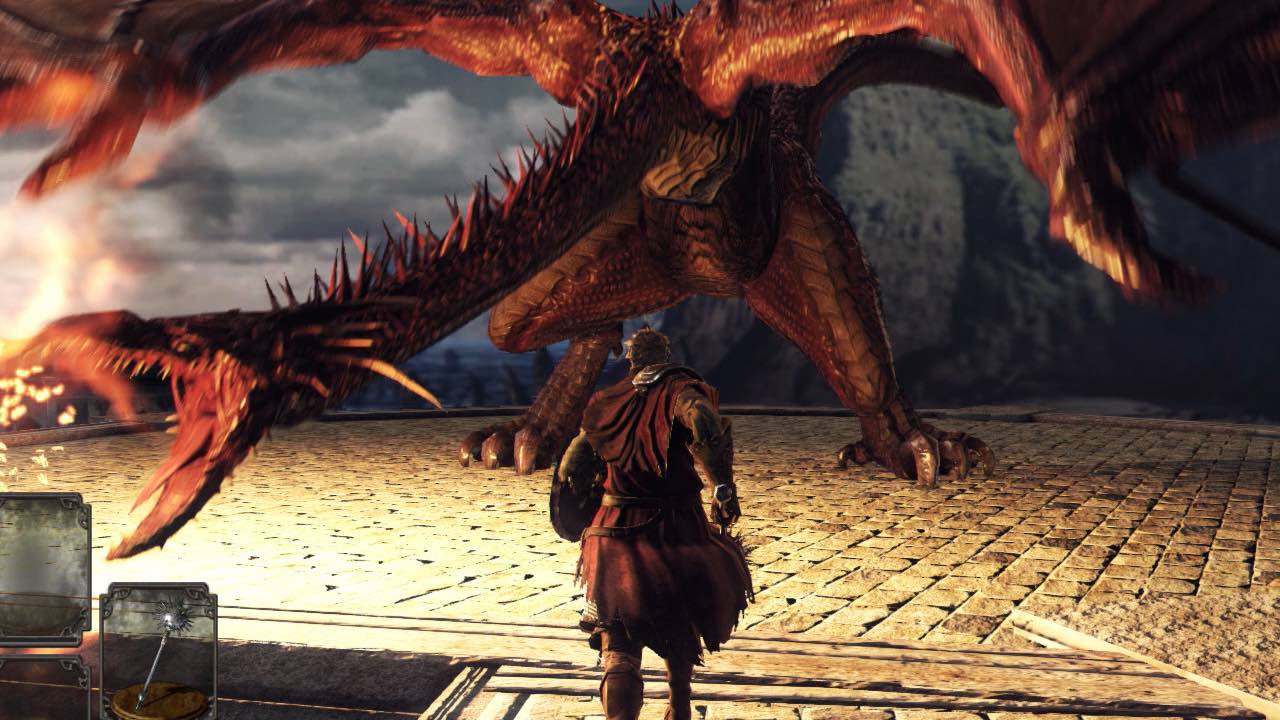 With this in mind, you may remember earlier that I said she was going the ‘wrong’ way.  Going the ‘right’ way would have involved her heading down a separate set of stairs back in Majula. She would have ended up at the Forest of Fallen Giants.  Still challenging, even for an experienced player; this is the area that most people head down to start. The most common enemy in this area is this kind of skinny, zombie thing that doesn’t even carry a weapon half the time. That route is a fair few hours’ worth of killing dozens of enemies and a couple bosses.  In other words, a whole lot of leveling and practicing goes on.  This all before going down the second staircase and fighting these giant knight pricks.

So yeah, skipping all that; she sees her first giant knight guy (you know, the first enemy she has seen since the tutorial), and armed with nothing but her starter sword and her wits, runs up and punches him in the nether regions. Okay, she hit him with her sword…in the knee…and it was more of a sidle than a run; but “she sidled up and sliced him in the knee” doesn’t sound as good, does it? No.

Then the giant knight guy swings back with his giant knight sword.  As I watched certain death descend upon Sandra’s character, I had time to contemplate. Time to feel regret.  I regretted that I hadn’t given her a hint as to the easier route.  A decision that could have implications for her future enjoyment of the game.  I could have eased her in.  I could have made the learning curb steep, instead of vertical. But I didn’t.  Now she was about to die in an entirely hopeless manner, learning nothing.  Many before her have left the Souls series for less. 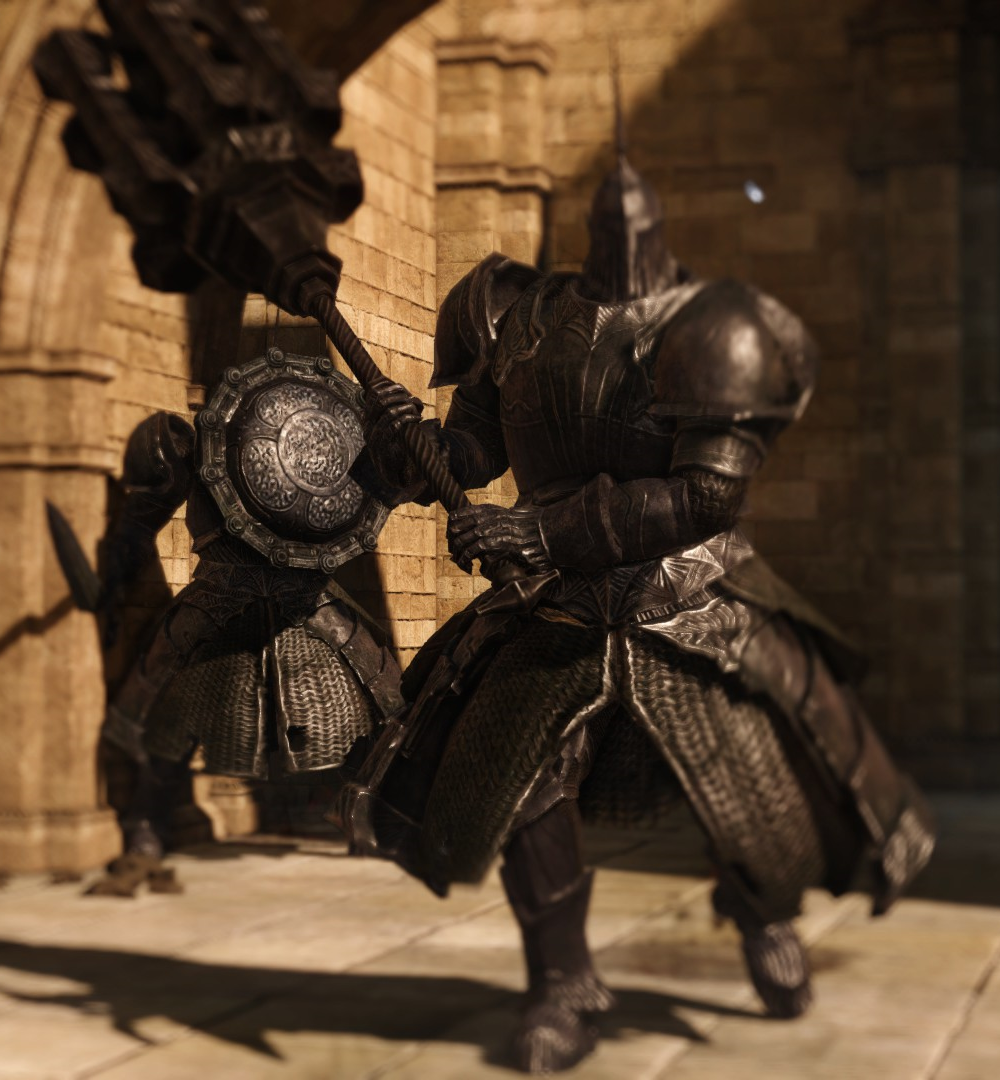 Then she dives to the side. A glorious flash of robust thigh and the giant blade flashes past her, missing. As the buxom avatar gets to her feet and dodges behind the giant knight dude, I look at Sandra in amazement. She is focused; eyes narrow, brow furrowed, intent. I look back at the screen.  A few more blows and another dodge roll goes by.  A tiny chunk of health is taken from the giant knight dude. Sandra is untouched.  At this point, my heart is pumping.  Dark Souls can do that to you, it’s one of the few games that can. Now I’m beginning to believe that my girlfriend has either lied to me from the beginning and is secretly a Dark Souls world champion or some shit; or that she is the Dark Souls messiah, rising to take her rightful place among the gods.

That’s the point when she rolls of the edge of a cliff.  Like a total noob. Here, the PS4 took a screenshot: 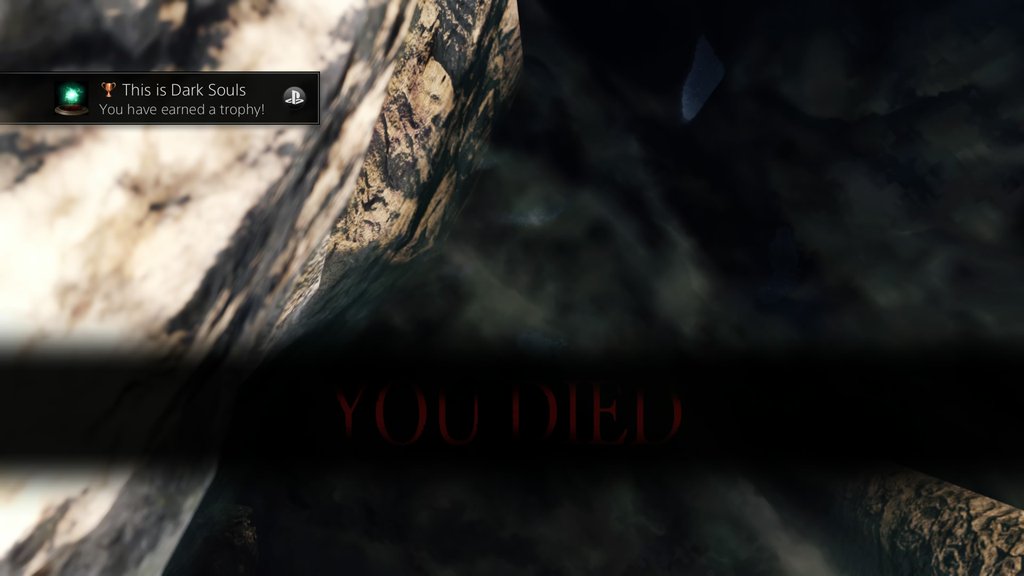 Suddenly, all the feeling from before come rushing back to me.  The regret, worry, etc; it fills my mind as I turn to look at her.   I expect to see the despair and frustration that will spell the end of our collaborative Dark Souls-ing. It’s all there. Disgust, frustration, anger, humiliation; everything I feared and more. As I cringed, she sharply looked back at the screen in anger and says “I can beat that bastard”. Then she did.  It did take ages; even after I told her that she could come back to him later, she kept at it. In the end, she did it. She beat the giant knight guy.

That’s when I knew she would be hooked. Even though there was another giant knight guy up the next set of stairs, and another after that, then another four or five after that, and a dragon; she didn’t care. She had gotten “gud.” She had beaten that giant knight dude that she initially couldn’t beat and it was awesome.

After her victory, we went the “right” way.  Now many more hours in, I think Dark Souls II may be becoming one of her favorite games too.  Awesome.

Oh and after that; she ended up being impressed with my skills anyway.  Yeah, that’s right: chicks do dig Dark Souls skills. Try saying that ten times fast.