One of the downsides of game journalism is there isn’t ever enough time to spend playing the games we want to play simply for enjoyment that have no connection to work at all. For that popular December holiday Wanda got me a game I had been wanting for quite some time but haven’t had the chance to play it, Horizon Zero Dawn. From the little bit of time I have had to spend with it, it seems like the acclaim it received was justified but that’s not one of the titles we’re going to focus on this month. Instead I decided to take advantage of the lull in work I have to do for this site and address a couple titles in my backlog.

The first title I finally got to play is one that intrigued me when it was first released but only got to spend some time with recently and that’s Far Cry Primal. There are other games that exist in prehistoric times, but the main other ones that spring to mind are Joe & Mac and Chrono Trigger, with the latter not really counting since it takes place across numerous epochs. Out of the stack of thirty or so games I want to play before I die this one was selected due to thinking about the stone age thanks to Retro-Bit and looking forward to Far Cry 5.

A couple things stood out about Far Cry Primal. The first is how it reminded me of Far Cry 5, at least what I’ve played of since that game isn’t even finished yet. All Far Cry titles obviously are going to have some common features but the whole building of the Wenja village while conquering Udam strongholds and them being this violent cannibalistic rival tribe felt like Hope County about 12,000 years ago. But that also made the game more impressive, since despite everything being primitive, the characters and situations felt like that could be taking place in a more modern game, once you make adjustments for animal skin clothing and having sabertooth tigers as hunting companions. 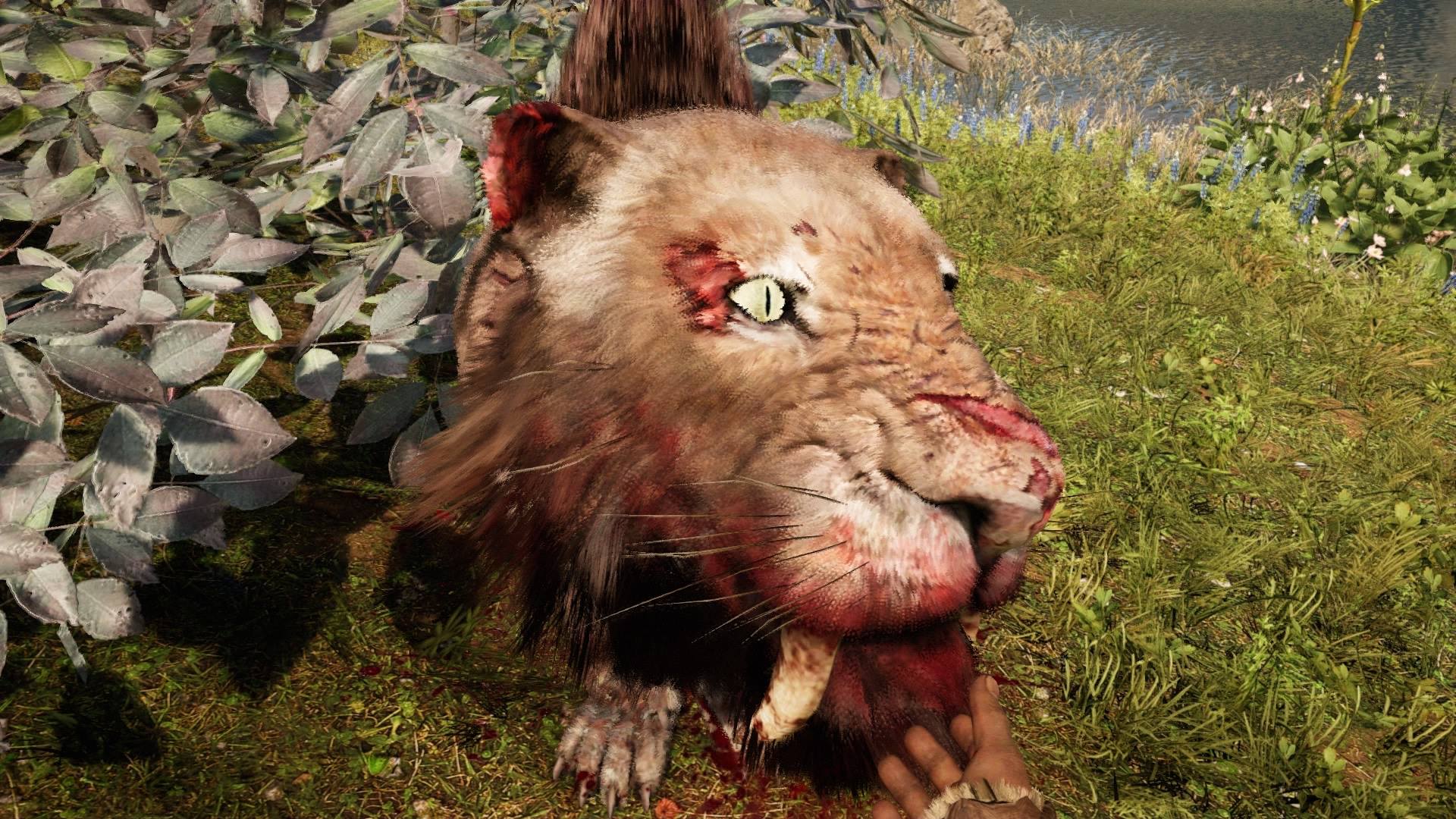 Being the pet owners that we are we couldn’t help but notice when my companion sabertooth tiger tackled another predatory feline the way they rolled around and fought with each other was similar to how our cats play with each other, except typically one of our pets doesn’t die and subsequently get skinned. Watching the big cats eat food was similar to how our cats behave when we give them treats, though none of our felines have mastered the skill of catching a treat in midair. Moving on away from cats, we both experience some schadenfreude when poor Urki attempted to fly with some feathers, fish scales and a tortoiseshell or stopping a thrown spear by strapping on some rocks.

The other thing, which Wanda actually brought up in a snarky comment about Ptolemy’s reign being too contemporary, which is how homogenized Ubisoft games have become. We’ve discussed this before with how virtually everything they put out nowadays seems open world, whether it’s something expected like the Grand Theft Auto inspired Watch Dogs or something more unusual like Steep or The Crew. She did have point with that statement, though, with hunting animals for crafting materials, setting enemies ablaze with flaming arrows, taming predatory animals to fight for me and calling an owl to stake out enemy territory this did seem like it could be a prequel to Assassin’s Creed Origins. If anyone from Ubisoft is reading this, while I normally hate microtransactions I would totally buy a white wolf skin Assassin’s Creed style costume for Takkar. This also led me to momentarily think I was a college professor where I continued to inflict acute narcolepsy on Wanda by going into a lengthy lecture into the similarities and differences between every Ubisoft game that came out in the past couple years. 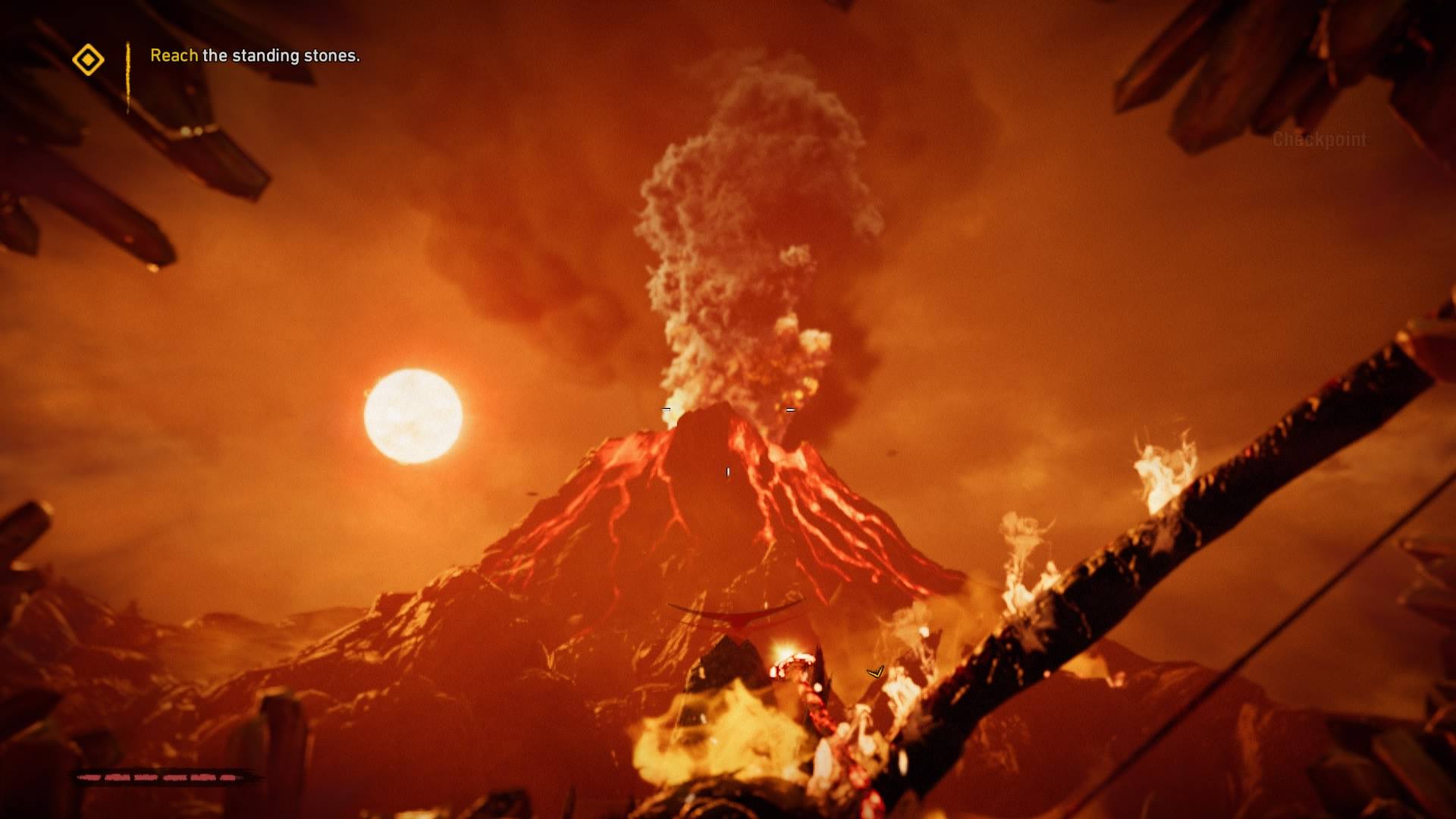 The next game I got into was NieR: Automata. This is a game that I was both extremely excited about but also apprehensive about playing. It’s no secret that NieR is one of my favorite games from the previous console generation, imperfections and all. It was not a commercially successful game nor did it get the greatest reviews, but it did amass a cult following of people who loved it which includes me, so when the sequel was announced I was cautiously optimistic, but when I saw how well it was being reviewed I was fearful they tried to make it more mainstream by removing a lot of the charm of the original.

These fears were of course laid to rest once I actually played it, and while many changes were made from the original, it still has the essence of everything I loved about NieR and made several improvements. There is just enough connecting material between the two titles that someone could play NieR: Automata without knowing anything about NieR and still love it but there is a much deeper appreciation to title for those who are familiar with the original. 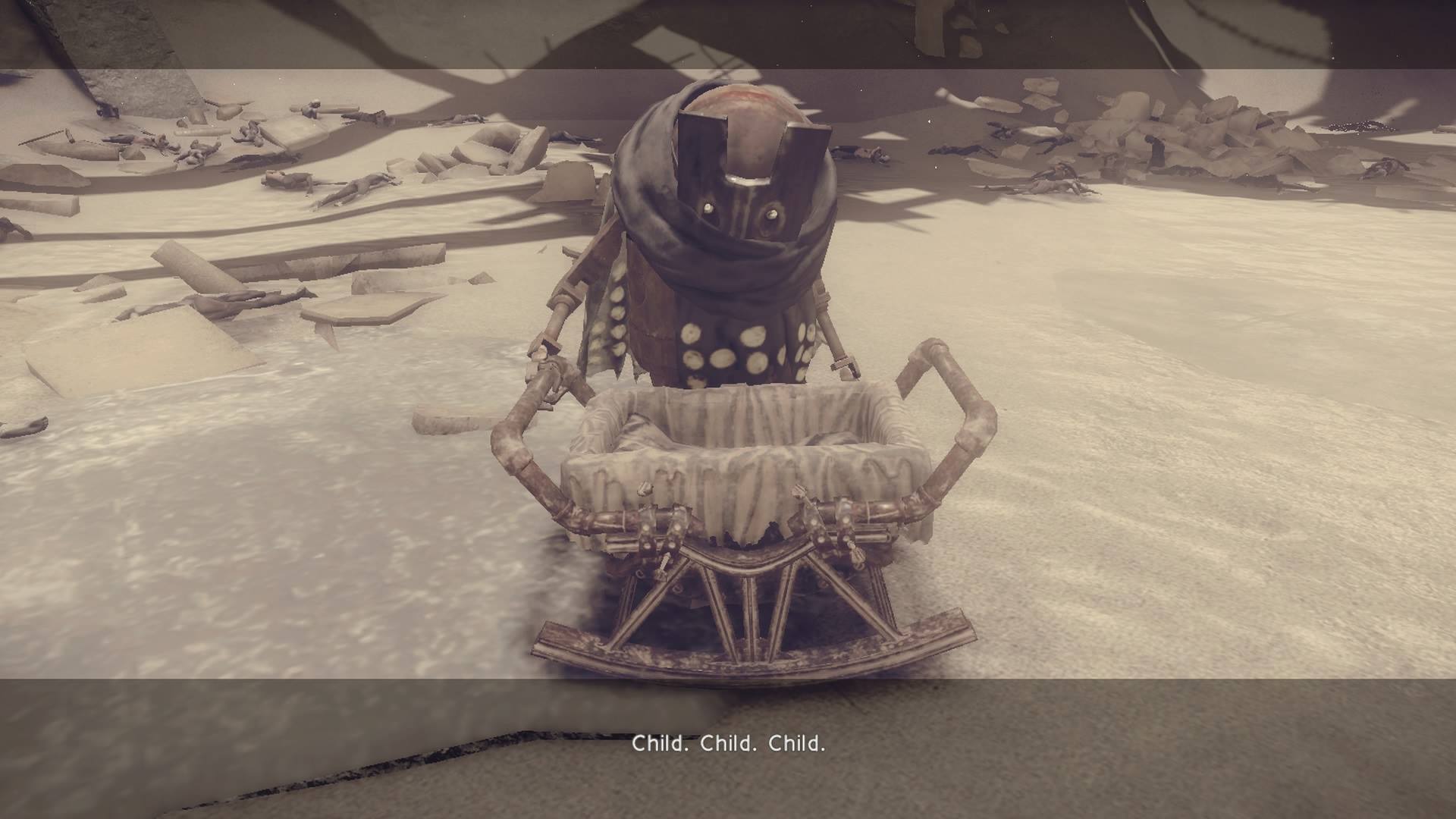 One of the genius aspects of Nier: Automata was how human the android and machine characters seem. They try to behave as if they were human by observing human behaviors, which in turn tends to show how ridiculous many aspects of our nature happen to be. From watching Adam try to teach his brother Eve how to act human to seeing the robots attempt at religion going horribly wrong, the attempt at the machines’ humanization was a spectacular comedy of errors, which was a perfect backdrop to the feelings that developed between 2B and Nines. The most human aspect of the machines and androids is their unbridled hatred for one other. Both of them were mechanical being created by humans and were attempting to evolve into us, yet instead of being able to look past their differences and centuries of programmed hate, they continued the endless war to destroy each other instead of trying to find some common ground, with the exception of just a few individuals.

While Nier: Automata is a masterpiece of storytelling in gaming with an emotional story, it had just the right amount of comic relief. Wanda and myself both enjoyed the machine production of Romeos and Juliets, though our reaction was similar to one of the machines that was less impressed by the performance. Nier: Automata was awarded Hardcore Gamer’s best original soundtrack of 2017, and while the score is filled with dreamlike melodies it was Emil’s Song that really cemented the soundtrack it’s victory. There is nothing like the characters engaging in serious dialog or combat when the trumpets accented with “everyday’s a sale, every sale’s a win” or “boppity boppity boo” to cause us to burst into laughter. What made things worse is I decided this song should be the only means of communication between us, which resulted in me constantly singing but changing the lyrics to be about Wanda or our pets. This is when she started to strongly consider the advice of her friends and family of maybe considering playing the field instead of tying herself down to one person just yet. 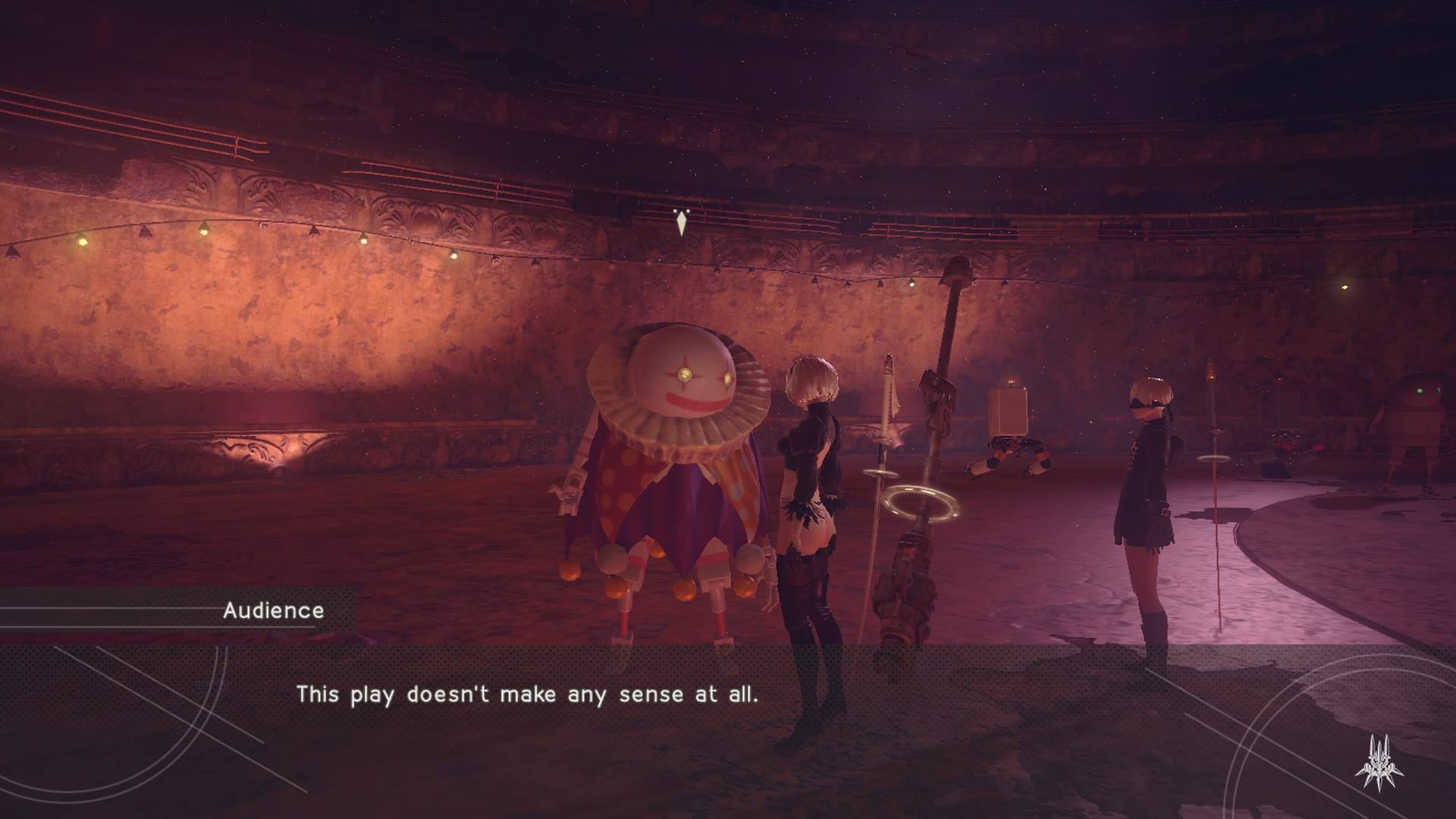 Both of these games ended up being a lot of fun for us. Nier: Automata is simply an amazing game, which has pretty much been established based on its Metacritic score and numerous awards it won. This was something I was happy with since I always thought the original Nier was a hidden gem and it’s good to see so many other people getting to enjoy that world. Far Cry Primal was a bit more of a surprise. I like the Far Cry games in general so enjoying it wasn’t the surprise, it was more how much we enjoyed that one since the stone age setting is something we typically don’t have too much interest in, but having giant cats we can feed and pet probably had some positive influence on our opinions.