With Breath of the Wild completely reinvigorating the Legend of Zelda franchise, it’s easy to forget about just how influential the original game’s overhead action and puzzle-centric gameplay was. It was an open-world game long before the GTA franchise made such a thing popular and a pristine example of games truly benefiting from having strategy guides to help you through some of the trickier problems. During the 8 and 16-bit heyday of the Zelda overhead games, there were quite a few clone games made, but none could make a valid claim for truly being better. Games like Neutopia and Crusader of Centy gave owners of a TurboGrafx 16 and Genesis something akin to a Zelda experience, but never topped it.

The first outright Zelda clone that ever felt like something that did the overhead Zelda formula better than the original games was 3D Dot Game Heroes on the PlayStation 3. Despite so much time passing between the original Zelda and this, it took until 2010 for a game to manage to pay homage to Zelda in such a way that it actually surpasses it in some regards. FromSoftware was behind it and as such, it does pose a formidable challenge, but a completely fair one that is in line with what overhead Zelda games featured. The interface and navigation system are more user-friendly than most Zelda games as well and the core gameplay is mixed up in some amusing ways. 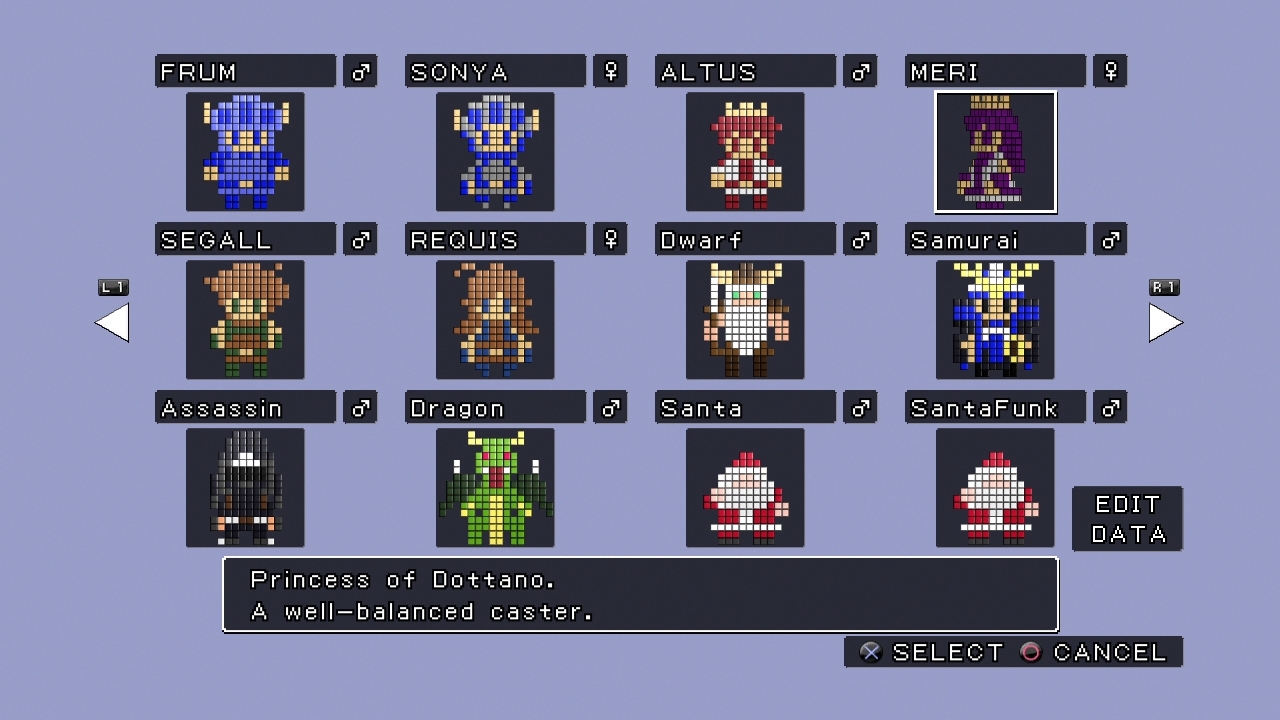 While it’s common for a Zelda-like to start you off as a waking hero, 3D Dot allows you to choose from a wide variety of templates for your quest’s hero. This means that while you can use the Link-esque Frum, you can also use a princess, a boxer, an angel, a gorilla, Santa Claus, a dragon, an assassin, a witch, a ninja, an anime-inspired heroine or even make a character. What’s more is if you want to expand the roster, you can just use a thumb drive and download a creation from the internet to put in the game — so if you would prefer a green tunic-clad hero to vanquish the forces of evil, you can do so.

3D Dot Game Heroes is both a loving homage to overhead Zeldas and a parody, as it takes some familiar tropes and bends them around a bit. In the original, who didn’t love using the long-range sword attack when they could? It was an early example of an open-ended game giving you a long-range projectile and taught many players at an early age how advantageous it could be to have a long-range attack strategy instead of a short-range one. 3D Dot rewards you with a giant screen-filling sword for having a maxed out health bar and it’s one of the most absurdly-large weapons in gaming history. What’s so great is that it’s a rare example of the player character being given a screen-clearing weapon and yet it’s not all that overpowered since in dungeons it’s only going to get rid of some enemies quickly and won’t help you at all when it comes to puzzles. 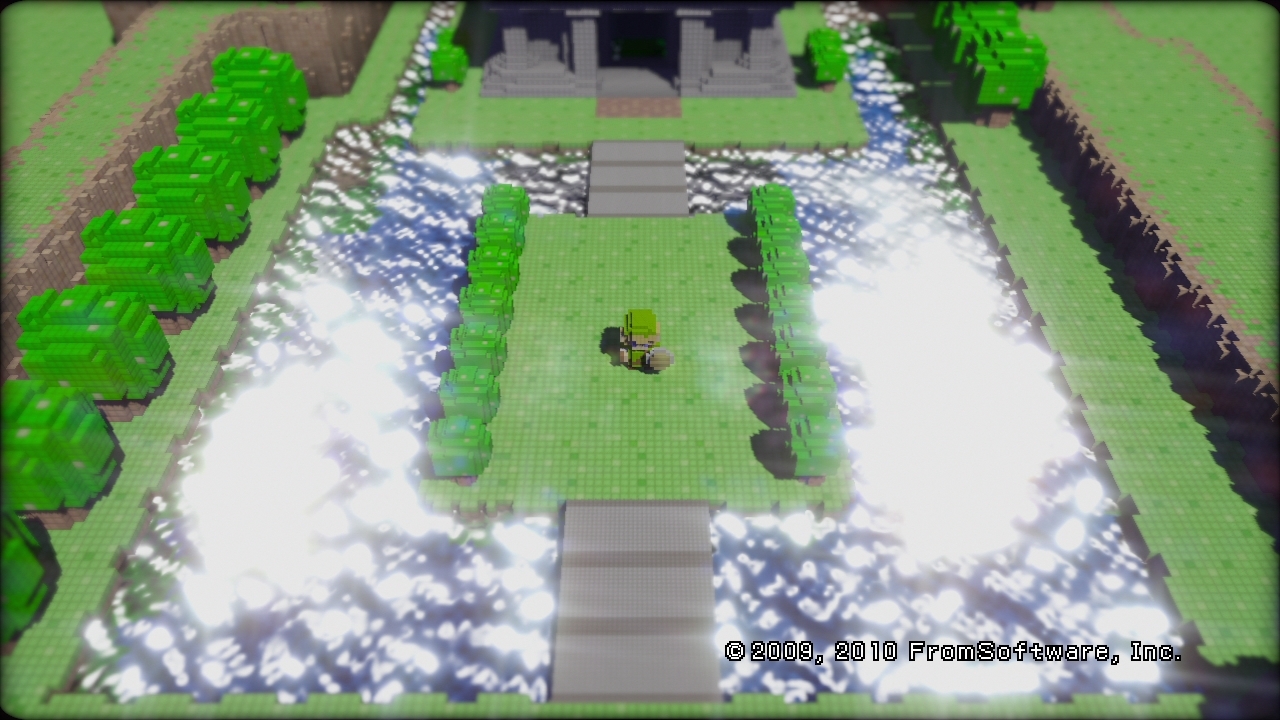 The puzzles work much the same as a traditional Zelda game, but you do have the added benefit of being able to adjust the camera around a bit using the in-game screenshot tool and get a slightly different angle on things. It doesn’t always help you solve them, but it does allow you to figure out more ways to solve a problem when you’re stuck. It’s also an early example of an in-game screenshot tool since you can’t change the angles much, but can at least adjust how high the camera is from the subject. The first half of the game features puzzles that can be solved in a fairly simple manner with some lateral thinking, but things dramatically ramp up in the second half.

Its core difficulty fluctuates too, but the citizens are much kinder to your hero than most are to game heroes. This is because while they still charge you money for things you need to save the world they’re in, they do at least offer some price breaks. Buying things in large bundles offers up a fair amount of savings, so it’s kind of like buying via unit cost at the grocery store instead of focusing purely on the price tag. You may spend more overall, but your in-game dollar is stretching quite a bit further. Unlike a traditional Zelda game, you can actually upgrade your gear with RPG-like upgrades instead of just swapping it out, which gives the game more depth. 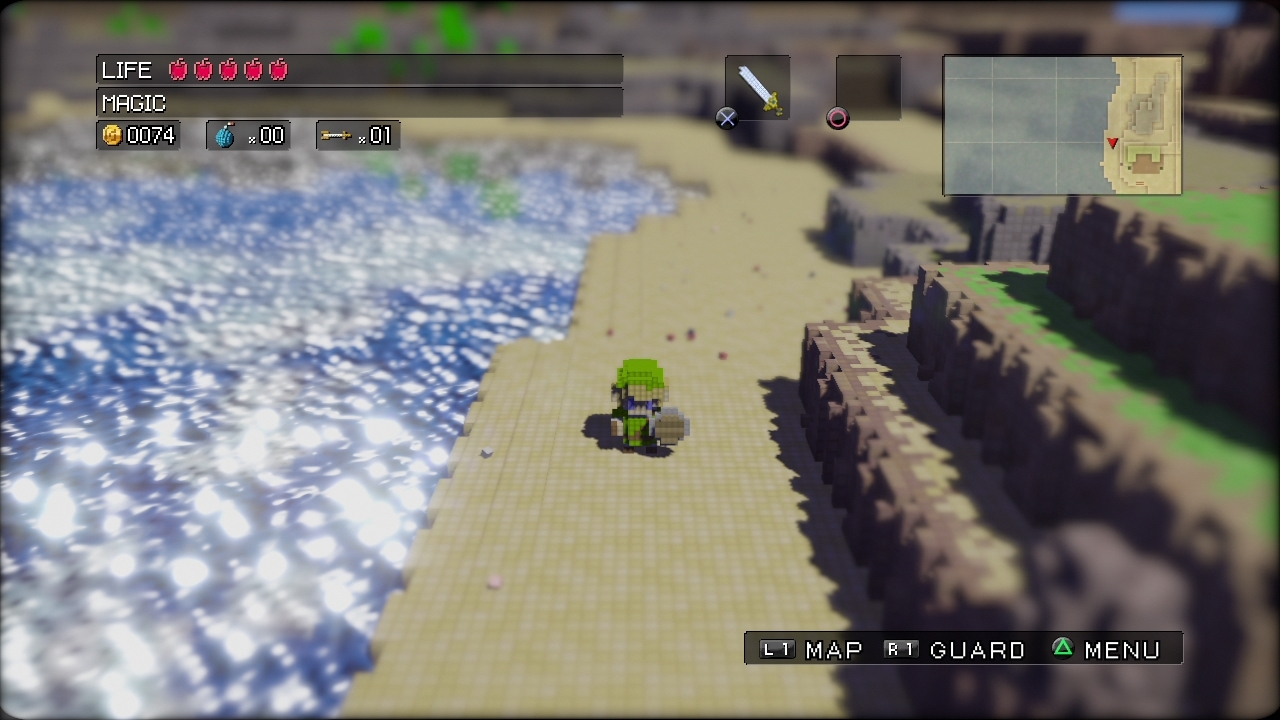 Visually, 3D Dot Game Heroes uses voxel art better than anything on the market at the time — and better than anything except for maybe Resogun. There is a lot of detail in the art and that comes alive when you see the world transform from 2D pixels to 3D voxels at the onset of the adventure. Beyond the detailed characters, the environments also look gorgeous – with some of the best water reflections ever in gaming and easily the best depth of field effects in real-time I’ve ever seen. It’s amazing how much beauty was rung out of the PS3 and this art style is going to age wonderfully as time goes on.

The soundtrack is wonderful, even if it does stick a bit too close to paying homage to great songs instead of actually creating fully original great songs. There’s a fine line there and while everything here is fun to listen to, the adventure would benefit from having a wider variety of songs to listen to. The adventure may not be as long as the longest of Zelda games, but it wouldn’t hurt to mix up the soundtrack a bit. Fortunately, the rest of the sound design is rock-solid and you can always count on the sound effects to make slashing through an enemy or bonking them with a boomerang seem satisfying. 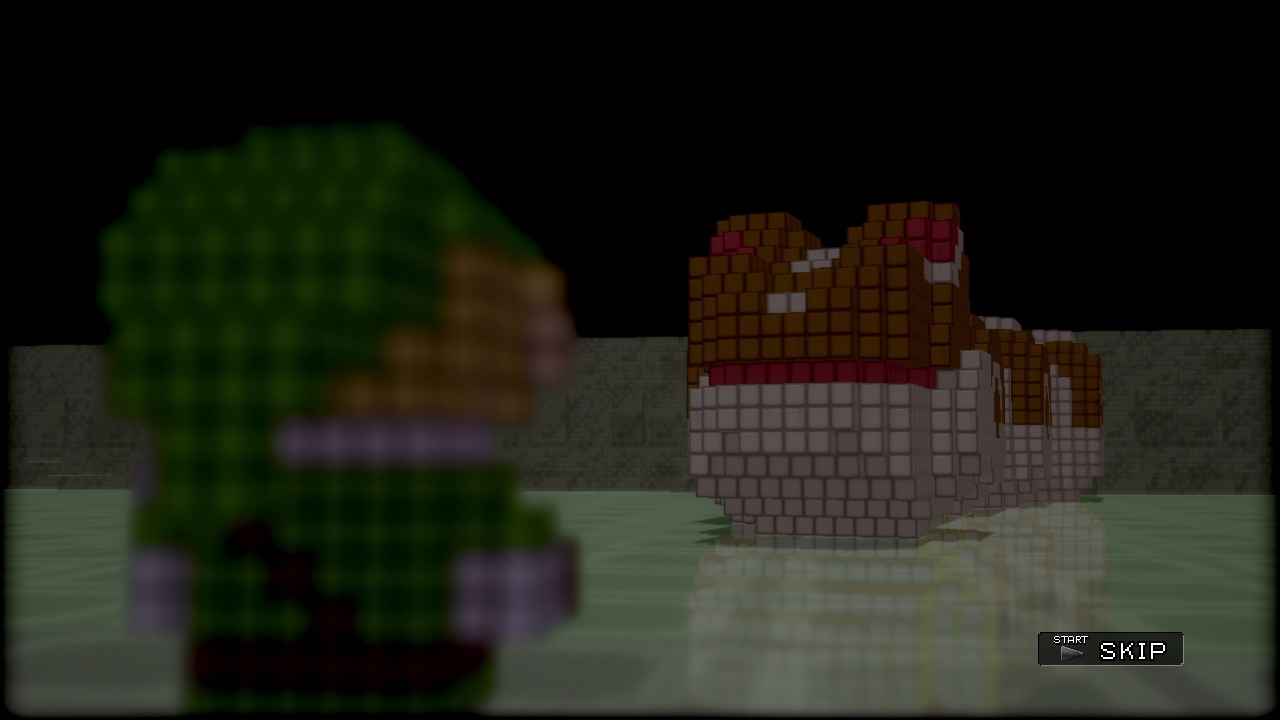 3D Dot Game Heroes is an outstanding gem of a game on the PlayStation 3 and something that would be absolutely perfect for a PS4 Pro-optimized remaster. The original release isn’t all that pricey now despite being an Atlus release and only costs around $30 sealed. There’s a lot of game to enjoy and those who have ever wanted a Zelda-like game on the PlayStation platform should give this a shot. It’s a fairly user-friendly Zelda-style adventure and yet remains something that will challenge you because of how well it teaches you its mechanics. It’s a lot of fun and in replaying it, I wound up having far more fun with it now after playing Breath of the Wild than I did when it first came out — and I thought it was great fun even then.