It’s been a little more than a year since we last covered the legendary Burnout series here in the graveyard. While the franchise has been largely dormant for a decade now, there was a time when it was a dominant player in the industry and one that had fans salivating for each new release. Its pedigree of high-quality arcade-style racing was something that allowed players to get a fast thrill, while its wide variety of modes meant you could play for hours on end and never get bored. The crown jewel in the original vision of the series is seen by many as the third entry — but Burnout Revenge has always been my personal favorite. It did everything right that Burnout 3 did, but added the ability to check traffic into rival cars — and added a whole new dimension and level of depth to the gameplay.

The usual array of Burnout modes are on display, with Road Rage remaining a go-to for quick bursts of action. There, your goal is to wreck as many rivals as possible within the time limit, which you can extend by WRECKING MORE ENEMIES. It’s a fantastic motivator to not only go from just trying to get a bronze, but easily replay it to get a silver and eventually a gold medal. It’s a great incentive for playing well and the ever-dangling carrot keeps me coming back for more. Being able to use regular traffic to earn takedowns makes this mode far more fun than it was before – and it was already pretty damned great. Chucking cars into one another is like a fast-paced chess match in real-time and keeps you on your toes all the time. 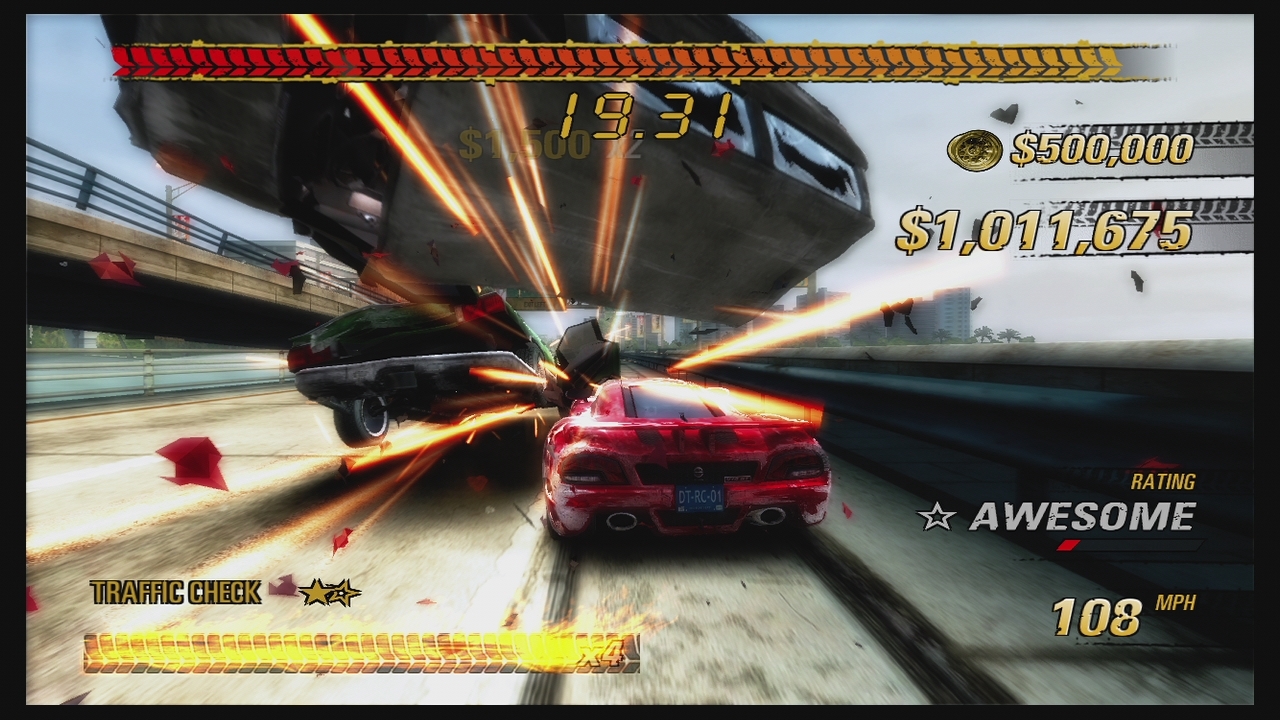 This feature gets its own showcase mode instead of just being part of a mode with Traffic Attack The goal here is to do as much monetary damage as humanly possible while checking traffic – and it is a blend of the series-favorite Crash mode and a bit of road rage mixed in.  Crash mode remains a highlight, and is a go-to for when I want a break from the core racing action. It’s really more of a puzzle game because it’s so reliant on timing things perfectly and adjusting the variables until they’re just right. You build up the boost, use it, and hope that proper usage propels you into the sweet spot to not only cause an accident – but a huge one. Pile-ons are what you’re aiming for since they can go on for quite some time and rack up tons of cash very quickly. It’s rewarding to see a fast-paced plan come together, and when you have different vehicles to use than you would normally race with at times, it adds a different wrinkle and makes you think that much more about what you’re doing.

The game’s mechanics received an extra layer of polish across the board, resulting in something that was both fun to play as a racing game if you wanted – but it could morph into complete chaos too and be even more enjoyable.  No matter which version you have, or what modes you prefer to play, you’ll be able to control your vehicles with great ease. There’s a lot of precision here too, which makes things like signature takedowns where slamming folks into pillars or sending them off the road into the water are rewarded and encouraged. Precise controls make it very easy to snag these and have an even more rewarding run. 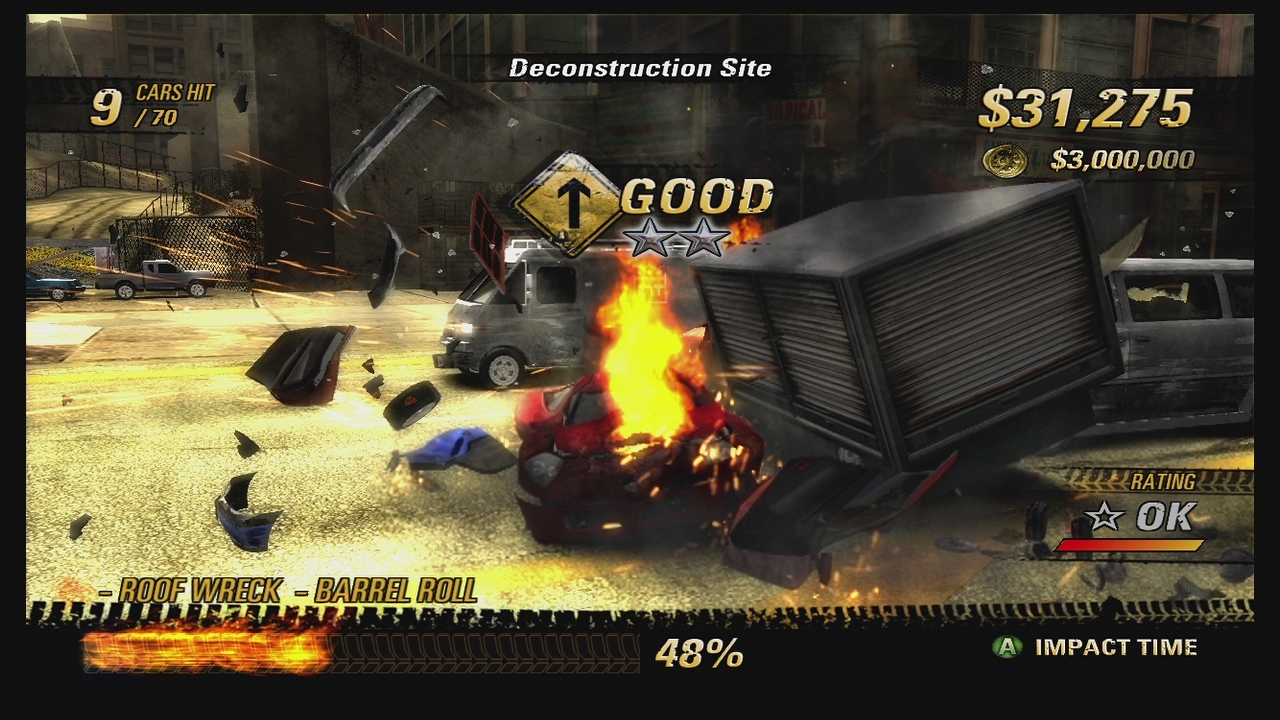 Visually, every version of the game performs admirably. While the Xbox 360 version is the best overall one graphically, the others aren’t slouches. The PS2 version looks incredible given the age of the hardware, and it looks about as good as the Xbox version in most ways. The Xbox version does benefit from higher polygon counts and better reflections. It also has a widescreen presentation making things a bit more immersive on modern-day TVs. The 360 version is incredible, but does go a bit overboard with the bloom lighting. Now, it’s almost a novel step back in time – but that effect was used a lot and it’s used here to hide any visual imperfections and does so admirably. The cars themselves look fantastic today on the 360, and no version suffers from major slowdown – which is excellent given the fast pace of the action.

Burnout’s sound design has always been outstanding, and Revenge features the best mix of absolutely vile crashes with bombastic narration and a decent soundtrack. This was the EA Trax era for the series, and led to a lot of radio-friendly licensed tunes that were at least rock-centric and far better than the later Burnout Dominator game featuring Avril Lavigne’s “Girlfriend” in several languages. Because that’s what folks really wanted in an action-oriented testosterone-infused racing game. The original Xbox version featured custom soundtracks, making it the best overall sounding version because while you can mute the music on the 360 version and play whatever you want, the mixing isn’t as natural as it is on the original Xbox when you simply replace the soundtrack. Crashes sound as violent as they should in every version though, with Crash mode’s many collisions and explosions shining brightly with either a good soundbar or a good set of headphones to bring out the detail work in all the destruction. 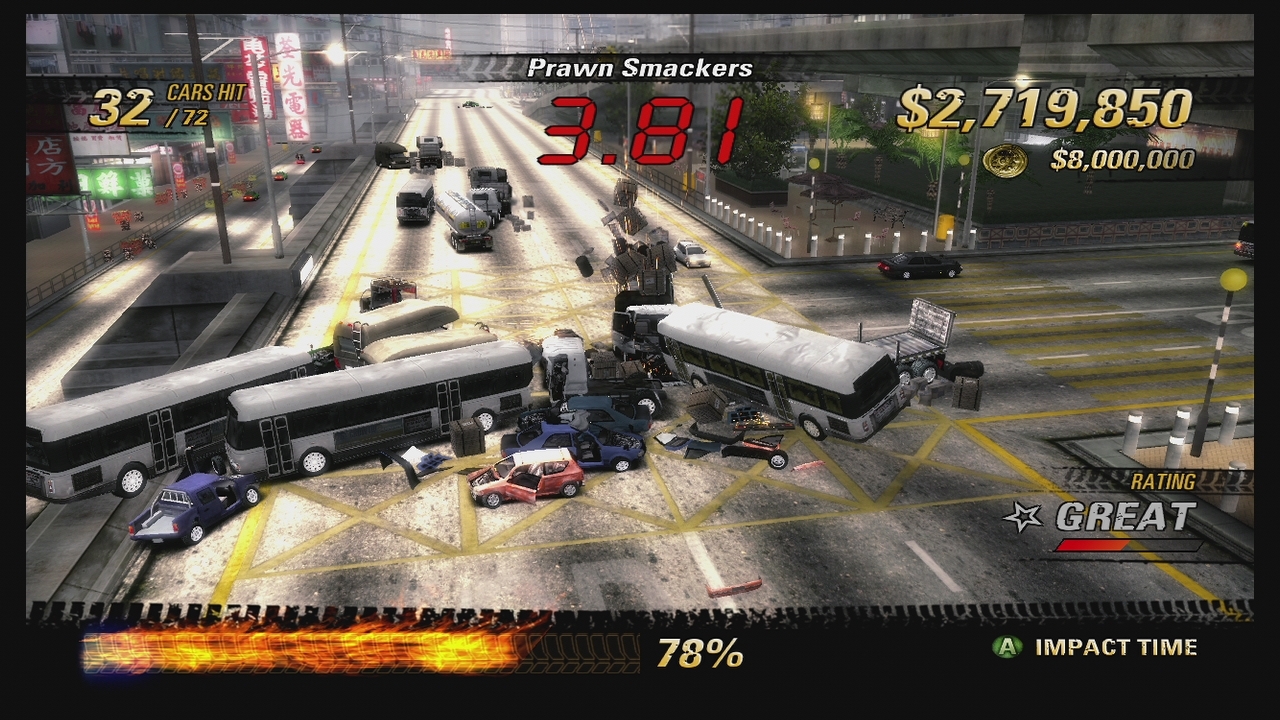 Burnout Revenge is the best Burnout game by a country mile when it comes to delivering a linear experience full of mayhem. Burnout Paradise may have opened the world up, but the lack of focus on events and races themselves being more like Midnight Club than Burnout hurt it. Revenge gives you set tracks, hazards for each, and makes you master them – which is far less daunting and frustrating than trying to master an entire map and figure out its nuances. Revenge doesn’t cost an arm and a leg — you can get the 360 version easily for about $15, while the Xbox version is around $8 and the PS2 version can be yours for around $10. You can’t go wrong with any version, but the Xbox versions are better overall and hopefully the 360 version will one day be playable on the Xbox One to expand the audience of it.