The sixth generation was an interesting one in many ways. We saw the past meet what we now know as the present in ways that couldn’t have been predicted at the start. The Dreamcast helped popularize online gaming on consoles, while Microsoft saw the future in broadband and ensured that the original Xbox only used broadband connections. The original Xbox was also ahead of the curve when it came to DLC and downloadable games in the form of the Xbox Live Arcade. Carve is one of many third-party Xbox games that fell between the cracks of history. It was a budget release by Global Star in 2004 and aimed to give platform owners a chance to enjoy a bit of WaveRace-style action with a big twist: online play!

Carve was actually the game that led to me ever getting Xbox Live. Prior to that, I’d played a bit of online on the Dreamcast, but didn’t see much of a point in it because of lag. Thankfully, with the broadband-only setup on the system, that wasn’t much of an issue and I was able to use a free trial to play a ton of Carve online before actually getting a full-blown subscription. Being able to play a WaveRace-style game with others was a lot of fun and it’s the kind of experience we haven’t had since beyond Hydro Thunder Hurricane — which was more of a wave-centric arcade racer than something that blended bouy avoidance and racing. 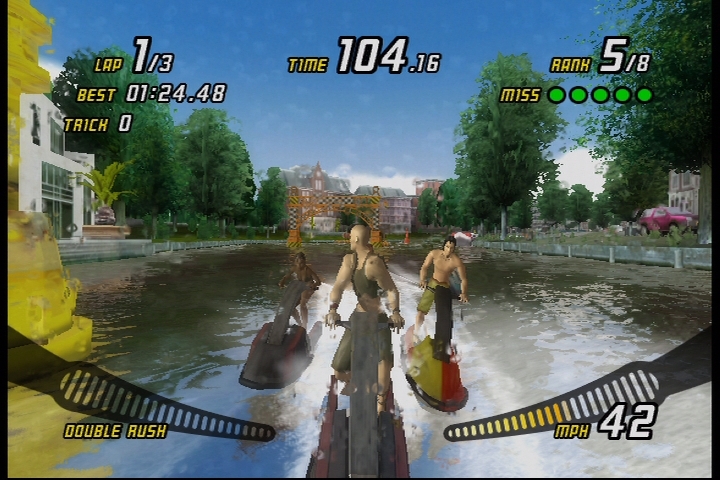 Carve had a lot of polish for a so-called budget release and that’s likely due to it being created by Argonaut Games. Yes, the creators of the original Star Fox crafted their own counter to WaveRace and wound up creating something that on a personal level was more enjoyable than WaveRace: Blue Storm. In terms of content, Blue Storm wins out, but when it comes to which game plays better, I think that Carve controls better and feels more natural to control thanks to having a better control layout — at least on the S pad as I haven’t tried it on the Duke. The Gamecube pad was good for many things, but somewhat iffy with racing games.

In terms of mode selection, things are limited, but still versatile enough for a game with a twenty dollar asking price. You’ve got regular races, which use not only tricks, but also have you bob and wave left and right to avoid yellow and red bouys, respectively. You’ve got a boost meter, but can only get it going after performing tricks, adding in a wonderful sense of risk/reward. You can blast through portions of a race, but only if you’re good enough at doing a wide variety of tricks and pulling them off in enough time to not mess up your positioning on the track. 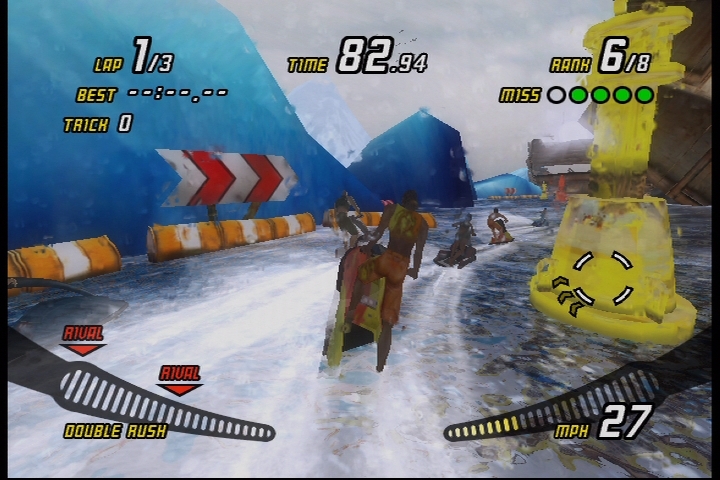 Say you’re in the back of the pack and you’re in the middle of the race as a whole — you can try to work your way up, or take a chance and try a trick. Smaller tricks are safer, but yield less boost time and thus may not help you out as much. If you’ve got a pack of rivals in front of you, it might work out perfectly — so you give it a shot and it pays off. Then you try that same trick again to keep a lead up and it hits, but you get nothing for it and wind up out of position. Instead of facing the correct side of the buoy, you’re on the wrong side of it and eat a penalty. This could wind up only costing you a position if you’re lucky, but could very well cost you the race.

Conversely, going with a longer trick early on is a bigger risk in theory, but it also gives you the most time to recover from a mistake. You can also just restart the race and minimize your lost time since this was an era before rewind features were in racing games. Pulling off tricks does require a bit of trial and error, which is why I love the time trial mode so much. Beyond using it to learn the track layout, you can also tinker with tricks a bit and learn their timing coming into straightaways or turns without having to risk also hitting rivals. 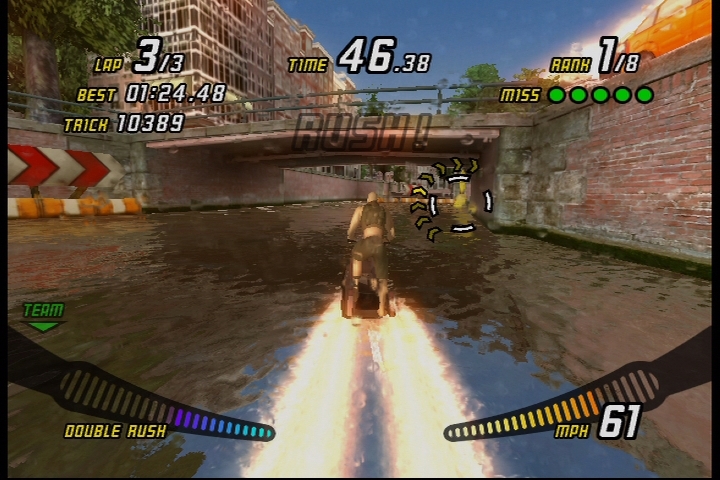 The track design in Carve is consistently impressive as well. While there aren’t a ton of different track options, you do get things like normal water-only areas alongside things like tracks that go through abandoned shipyards or even a city with waterways through it. The latter is particularly interesting to see because you’ll see cars driving over bridges that you race under and people biking alongside the paths you’re on. There’s a surprisingly high amount of world-building with moments like that and it helps add a sense of reality to what’s going on.

There are small touches with the graphics that help with that as well. Having water splash the camera and appear on your screen is a great small thing that isn’t really impressive on the back of a box, but does help immerse you in the game. Small jumps into the water will result in small splashes, while going gung-ho with a big trick will result in a large portion of the screen being splashed alongside the bright orange RUSH lighting showing off your boost. The water remains impressive to look at even in 2020, while the character models are about the only thing that date the game visually beyond the trackside objects that used low detail levels compared to what was seen in races. Trick animations are smooth and even smaller transitions, like slightly missing a trick and holding onto the back of the craft before pulling yourself up look good. 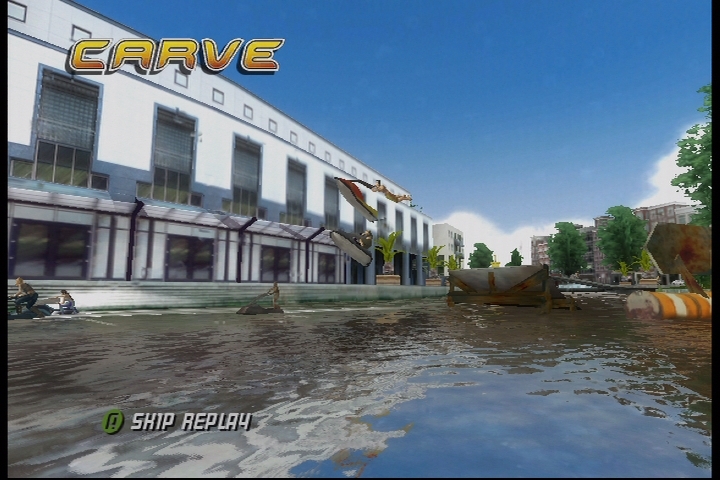 The game’s sound design is a mixed bag, with strong music, but weaker voice work and iffy sound effects. The music selection is great, with a diverse lineup of European-style dance music that gets the blood pumping even if it doesn’t fit the action all that well. The sound effect work when you’re surrounded by rivals is impressive, as you hear engines roar all around you — and that’s made better with the rumble usage fluctuating as the intensity increases. The voice work is a real sour spot though as it’s minimal in both quantity and quality, with partners saying the same lines over and over in a single race — let alone in a single series.

Overall, Carve is a fantastic watercraft racing game and one of the most underrated games of its type. Being a budget release hasn’t helped it get any more love after its initial release and it was never added to either Xbox 360 or Xbox One backwards compatibility lists. This means that only those with original Xbox hardware can enjoy it and finding a working Xbox system in the wild can be tricky. Luckily, the game itself is only around $10 or so now and is a great value for the money. While online play is long since dead for all original Xbox games, there’s still a lot of fun to be had with offline play.