When you think of the N64, many games immediately come to mind. Games like The Legend of Zelda: Ocarina of Time, Super Mario 64, Banjo Kazooie, or GoldenEye. But what about Mystical Ninja Starring Goemon? Never heard of it, you say? Well it’s time to fix that, and while it is not a classic of the caliber as the aforementioned games, it certainly is a hidden gem worthy of anybody’s N64 library.

Mystical Ninja Starring Goemon, developed and published by Konami, is a 3D adventure game cut from the same cloth as the famous Zelda that it shares its platform with. Where Mystical Ninja sets itself apart, however, is the story, which aims for a level of humor that transcends mere quirkiness, and makes the full transition into wacky. It has a musical introduction (similar to Banjo Kazooie, but with lyrics), a ridiculous story involving a giant spaceship in the shape of a peach, giant robot battles and villains whose main goal is to turn the world into one big performance stage. 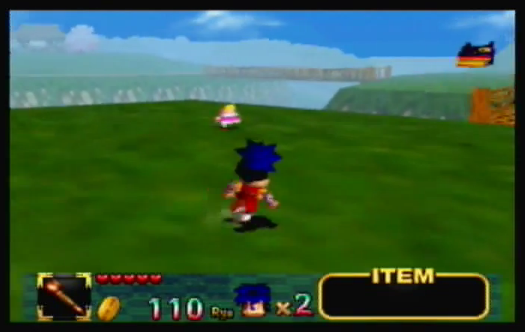 Weird would be the operative word to describe the story presented in Mystical Ninja, but not in a bad way. The humor can be a hit or miss, but at least there is a laugh track at certain points (yes, really). Some think the game received a poor localization, which could be true due to the difficulty of “translating” humor, or it just could be the jokes themselves are lost on the western audiences. Either way, those who are going to give the game a try need to be aware that the “humor” underpins the entire game. But even if the story isn’t completely your thing, the game is still incredibly fun.

Whether you “get” the jokes or not, the mechanics and gameplay of Mystical Ninja are rock solid. Exploration is the name of the game as you step into the shoes of Goemon and his supporting cast of fellow ninjas to save Japan from the stage creating villains. The abilities available at the beginning of the game are relatively few, but as is typical in the genre, they start to add up as you explore and find new weapons to wield and abilities to use. While the game is “open world,” the player is guided in that certain areas are only accessible after gaining the necessary weapon or ability needed to access the area. Transitioning between the different protagonists is a necessity, but not a chore, and each one is unique and fun to play. 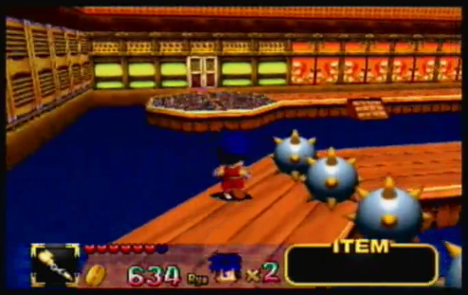 Not content with just giving the player wacky and idiosyncratic humor, Mystical Ninja also possesses colorful and crisp graphics (pretty high quality for the time) to please the eye and a high quality Japanese themed soundtrack for you to listen to as you make the journey around the game environment, whacking random baddies with your weapon and character of choice. The game is set in Japan, so the towns and environments obviously follow that theme throughout the game. The layout of the dungeons in the game is well done and traversing through them is as fun as some of the top games in the genre. The boss battles are quite unique, and what they lack in difficulty they make up for in variety. Some of the over world environments are a little sparse, and the camera controls can be a little problematic, but overall these are only minor problems.

If you missed out on Mystical Ninja Starring Goemon the first time around, it wouldn’t be that much of a surprise. It didn’t garner as much attention as other heavy hitters on the N64, but the quality of this game means that it can stand toe to toe with the top players of the genre. It may not beat Zelda, but N64 gamers would be remiss to miss out on this fanciful and unique title.