Yu Suzuki’s OutRun was one of the most-acclaimed games of the ’80s and managed to deliver incredible driving action in arcades, with mixed success on consoles. Early ports were iffy, but by the late ’90s, arcade perfect ports were available — with the Sega Ages port on the Saturn even allowing for smoother play than the arcade. The non-OutRun games in the series hurt its reputation, however, with bad licensing deals and poorly-optimized ports on the Genesis making it feel like a complete relic. Fortunately, Sega never lost faith in the series and produced an arcade follow-up worthy of the name in OutRun 2 in 2003. While the original used a Legally Not a Ferrari, this incarnation had the full Ferrari license — which wound up being a death knell for re-releases, but does allow for the game to stand as a testament to the series finally getting the license to begin with. This sequel aimed to live up to its name by taking the branching paths of the first and expanding on that concept with a grander scale than ever before.

The original was all about beating the clock and now you can do that while also having in-game rivals to contend with. The branching paths are back with more stunning environments than ever before. You still have a classic beach, but you’ll also get Vegas-inspired areas, areas filled with dense clouds, cityscapes, and cool areas like a castle wall, a stunning river area and a spooky forest offer up something different from past games, while the tulip garden is something that would have been right at home in the original. AM2’s ability to craft classic arcade racers is unmatched and OutRun 2 is arguably the last true arcade-style racer with legit arcade roots to it. The normal Outrun mode is more addictive than ever before thanks to the revamped driving, which features an emphasis on drifting that works perfectly right out of the gate. 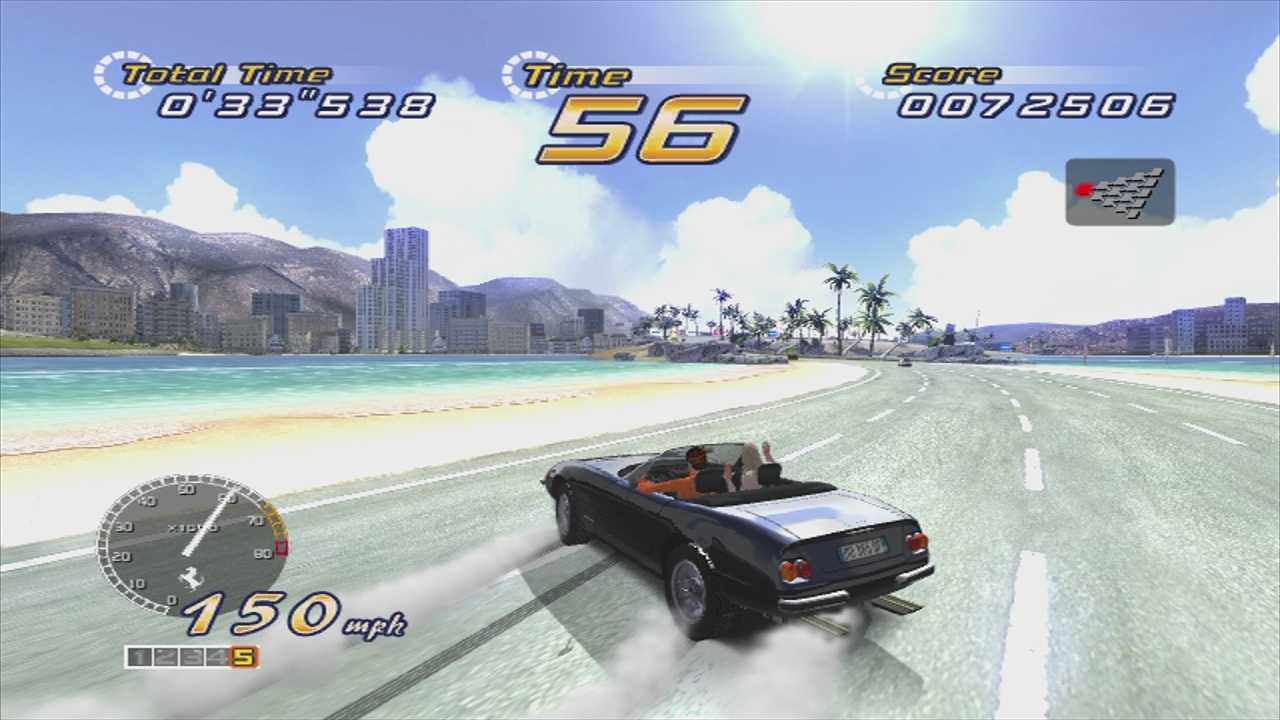 A lot of games since have tried to go for a drift-heavy gameplay style, including Sumo Digital’s own Hotshot Racing, which is fitting. That game aimed to be an homage to Virtua Racing with more content, and they developed the Xbox ports of both OutRun 2 and OutRun 2006 Coast to Coast. Here drifting is as natural as accelerating or braking as you lean into the drift, tap the left trigger and then keep on the right trigger to drive right through it. Your ability to aim your car precisely through a drift remains unmatched and it’s amazing to get into a groove where you’re drifting, gaining speed, gaining positions and doing so while dodging and weaving through traffic in a long turn. It’s a testament to just how well-crafted the drifting is that it holds up so nicely after almost 17 years since the original release — and while it may not feel like it, that’s about as much time as had passed from the original release of OutRun to the arcade release of OutRun 2.

The core checkpoint-based racing is more fun here than ever before thanks to the refined driving controls, but this follow-up offers a lot more meat on the bones in its various incarnations. Heart Attack mode is like the regular game, only with passenger requests — like drifting through tough turns, driving through lanes, driving safely by avoiding contact or knocking cones over. It’s amazing how the addition of objectives helps make you a better player because instead of focusing on just getting to the next area or perfecting a driving line, you’re changing your brain into thinking about the objective first and foremost — and that allows the other things you need to improve upon to get better at the game to improve passively. 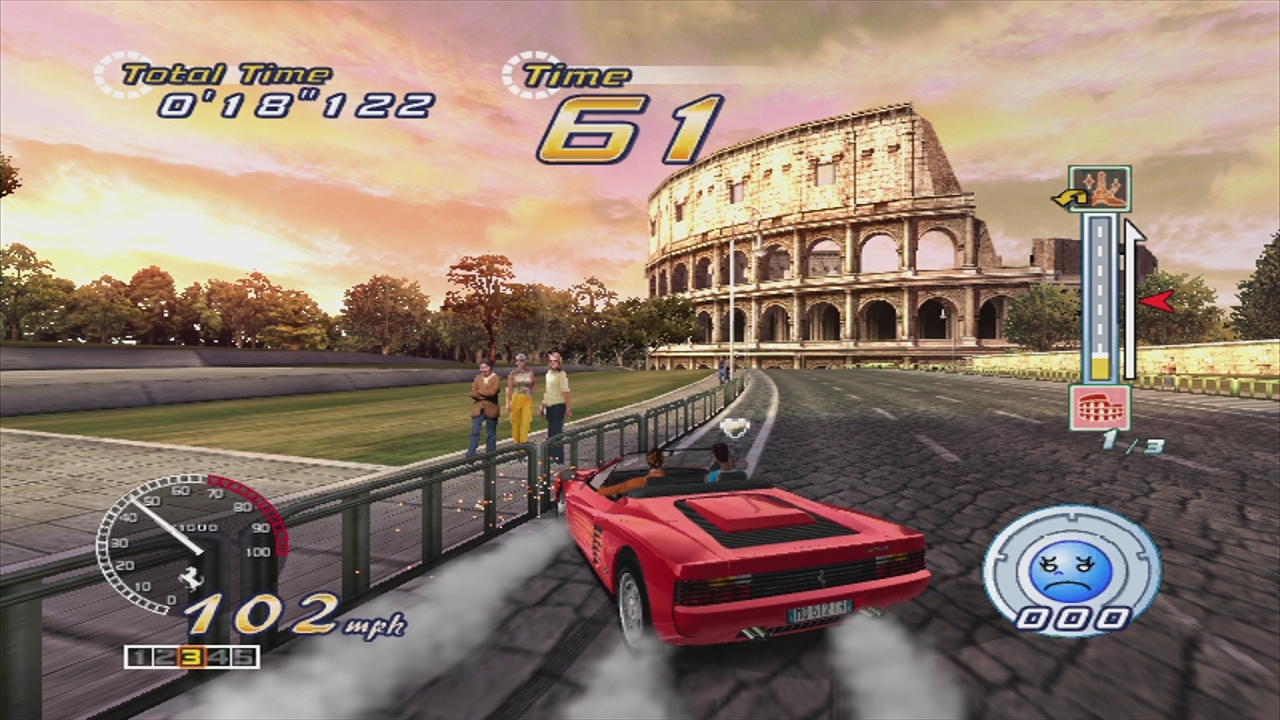 The Xbox version was the only console version we got of the original release of OR 2 and it was remarkable for its time, holding up nicely now in terms of content. There are a few exclusive cars in this version and you can enjoy tracks from the previously arcade-only Scud Race and Daytona USA 2 on it; although it does seem odd to have merge those games into the Outrun framework in theory, it works out nicely in execution. You can also enjoy the original arcade classic as an unlockable, making this a definitive OutRun experience overall. In hindsight, given that OR 2 was released with a full Ferrari license, it’s a shame that all of the arcade games weren’t put in to make it THE best way to enjoy the series, but there’s not much that can be done about that now beyond hoping for Sega to regain the Ferrari license and then do a re-release with all games included without any sprite changes.

A year after the original release, SP came out with new content including fifteen courses and a new arrangement of stages. The Xbox version of the original release included a mission mode and online play allowed you to enjoy the game in the first online mode the series ever saw. Another follow-up, Outrun 2006: Coast 2 Coast blended in OutRun 2 SP content alongside a remake of the first game to provide the definitive OutRun 2 experience in many ways. This incarnation features even more content, including races against other rivals, slipstream tests and elimination races to test your skills in ways that a more traditionial OutRun expereince couldn’t. This version of the game features more content and while the original OR 2 game gated it behind progress, here it’s gated behind building up in-game points for the shop. Unfortunately, the original OutRun game was stripped out of this version on Xbox alongside the extra arcade tracks, but it did see a wider release. Coast 2 Coast hit both the PSP and PS2, but still played best on the original Xbox. You can enjoy that version via Xbox 360 backwards compatibility and it also loads up easily with Xbox controller support on PC — so if you can find that version out in the wild, give it a go. The only flaw in the OutRun 2 formula gameplay-wise are the areas between the stages as they’re about 20 seconds of filler — and while they do look good, it does result in filling time that you really want to spend seeing the next stage instead. 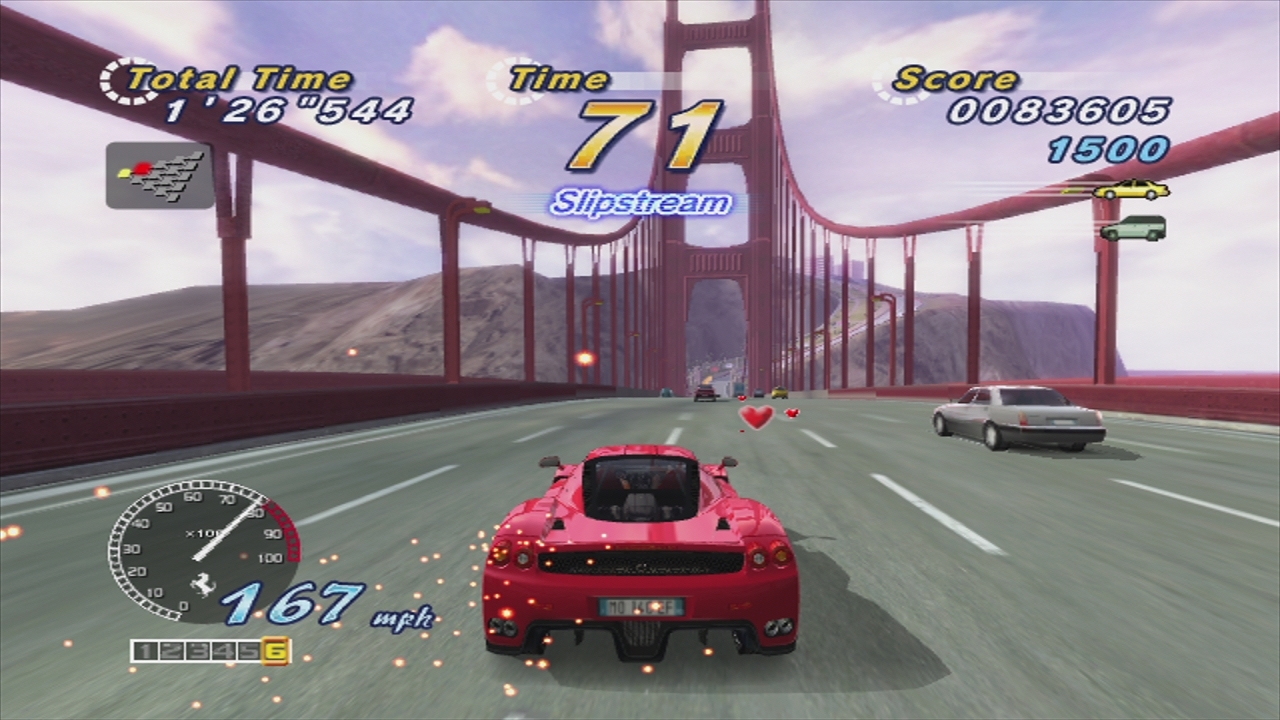 No matter which version of OutRun 2 you enjoy, you’ll be getting a great looking and sounding experience. Car models are detailed even for dummy cars that fill the track and the environments are full of rich detail that add to the fun. When you finish up one part of the track to move onto the next, you have little filler sections and here, you’ll get little cameos like the dragoon from Panzer Dragoon or jets from After Burner flying around. The sky and cloud transitions throughout races are stunning and make every part of your run feel just a bit different. The scenery is used to evoke things as well, with claustrophobic clouds being used to make you feel boxed in while sunny areas feature a lower camera to better-emphasize those surroundings. Outside of the jagginess and character models looking of their time, OutRun 2 is a visually-impressive game even today — especially the Xbox version of 2006 although the PSP and PS2 incarnations are impressive given the hardware.

OutRun’s “Magical Sound Shower” remains one of gaming’s greatest compositions and it’s never sounded better than it does in OutRun 2. The other classic songs are featured here with remixes alongside new songs that fit right in with them. There are also lyrical songs includes for the first time ever in the series and it’s a great-sounding experience. Voice effects also help out as your girlfriend is always annoyed with you when you do poorly and lets you know what a failure you are for not succeeding. She’ll scold you verbally and then slap away at you in some physical comedy. Crash effects are also fantastic and violent crashes sound destructive, while mild nudges on the road offer up a satisfying clonk — just enough to let you know you hit something without making it seem overbearing. 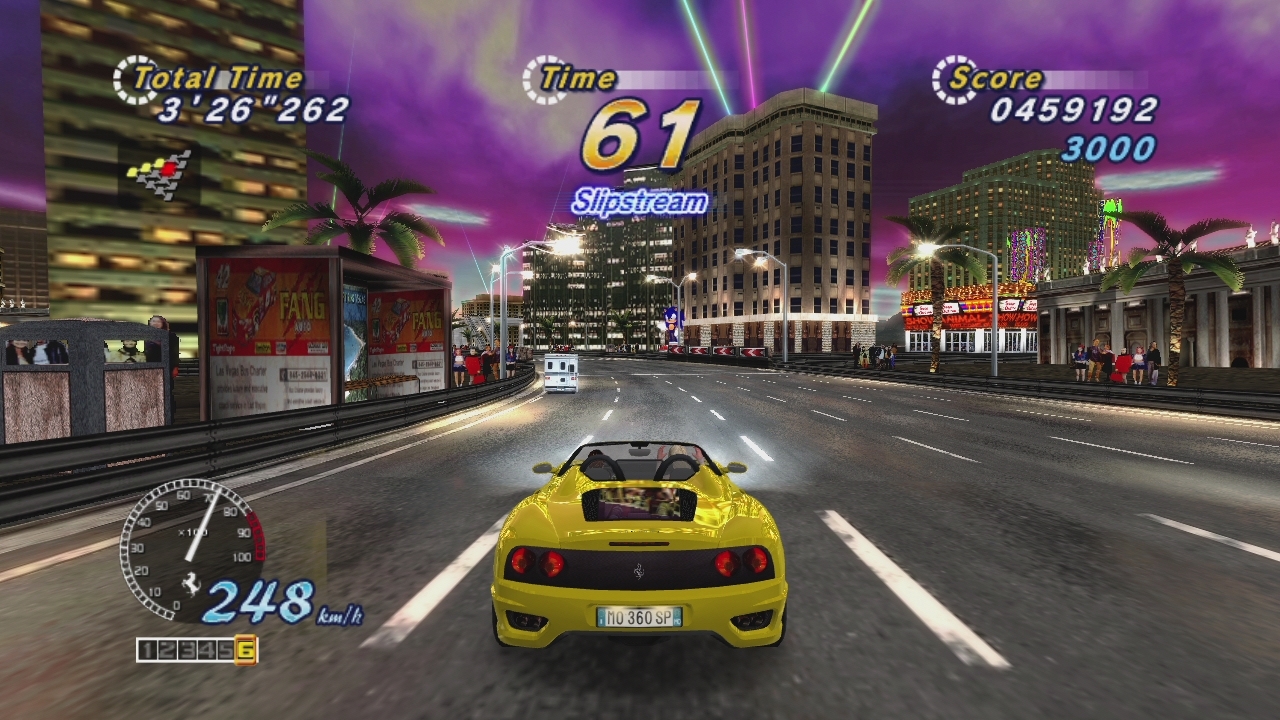 OutRun 2 is a classic and Coast 2 Coast is the best overall version of the game to get. If you were an Xbox 360 owner when the system was alive, you may have a copy of Outrun 2 Arcade — which is a stripped-down version of the game, but still worthwhile as it’s got a decent amount of content and would have been better if not held back by MS’s limits on games at the time. Unfortunately, OutRun 2 on the Xbox may be the best version to physically buy as it not only plays great on the 360, but it only costs around $20. Coast 2 Coast can run you anywhere from $100 on the low end to up to $500 if you want it sealed. Other than texture issues, it plays great on a 360 and that’s my preferred way to play when I’m not at a PC since that version has all of that content, but doesn’t run the risk of damaging a highly-valuable original Xbox game. OutRun 2 is Sega’s final major arcade-to-console game and marks the end of that era in their history. Hopefully, we’ll see Sega and Ferrari make a deal again and then get either modern re-releases of these games or a full-on new OutRun game to enjoy.