The PlayStation 2 was one of Sony’s greatest creations and spawned not only the biggest console of its time, but also a slew of franchises that remain beloved almost twenty years later. The original Ratchet & Clank was something unique when it came out in 2002 because while we had mascot duo platformers like Banjo-Kazooie before, we never had one that was so action-focused. You had funny dialogue between the two protagonists and their chemistry was perfect. It was a rare 3D platformer where you wanted to see the plot unfold just to see what they’d say, while its blend of melee combat and a wide variety of gun-based options kept the action fresh.

Insomniac had previously tried a mix of comedy with action and platforming with the first three Spyro the Dragon games on the PS1, but Ratchet felt like the fully fleshed-out version of that kind of game. The same attention to detail with the voice acting, something that wasn’t done a lot back then, was taken to the next level as was every gameplay element. Spyro excelled at speed and ramming, while the PS2 Ratchet games gave you more weapons and gameplay types. The series did get overexposed, which led to a mild burnout until it was reborn with a sequel series on the PS3 known as Ratchet and Clank: Future. Beginning with Tools of Destruction, we saw a new era begin for the series. 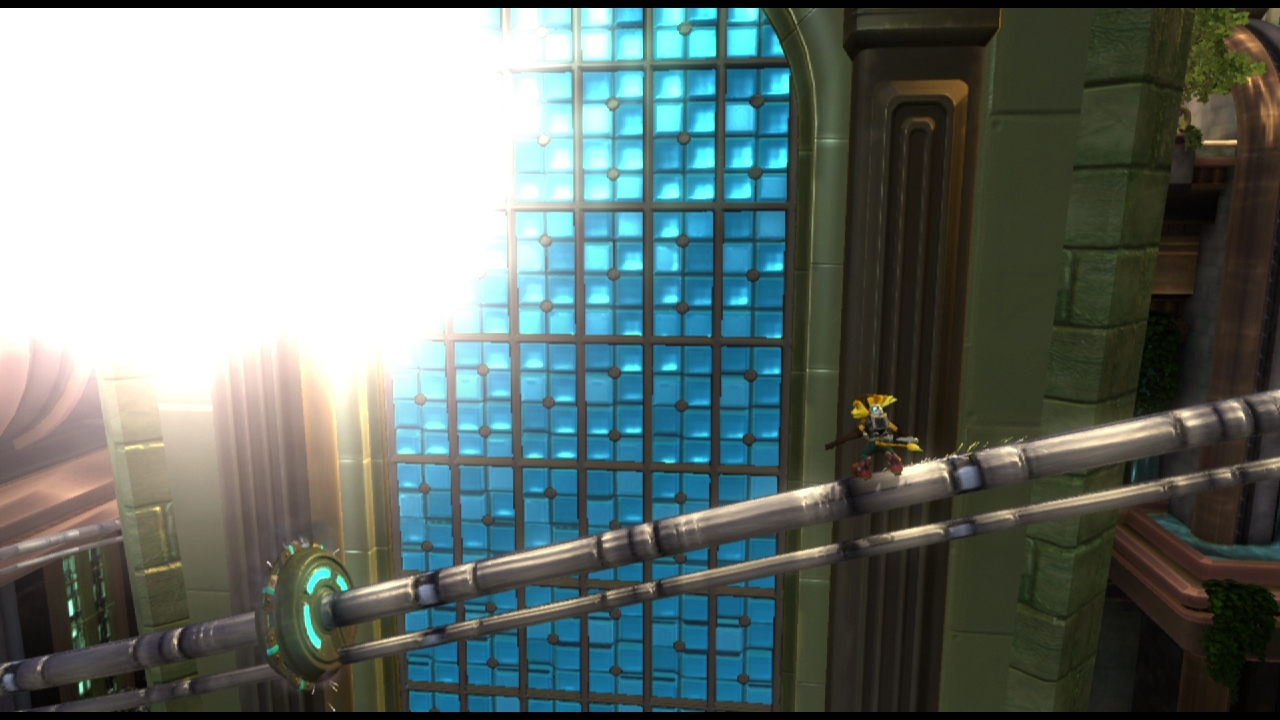 Released a little under one year after the PS3’s launch, this was easily one of the console’s greatest showcases of the time — and it has aged remarkably well over the past thirteen years. Taking place after the PS2 games, Tools flings you into the future with familiar elements — like the protagonists and the cowardly Captain Qwark — while retaining the fast-paced gameplay, but taking it to the next level. Puzzle solving is expanded upon with more gadget-based puzzles using the environment and everything has more polish than it ever did on the PS2. There’s also a greater emphasis on platforming than before, with some straight-up overhead-style platforming areas that nicely test your mettle.

Future Tools kept everything that worked about the original series, while adding in more activities to keep the action from getting old. Flying sections allow you to send Ratchet through rings like you’re a living plane ala Pilotwings. Tools of Destruction has a healthy mix of new and old, with a massive step-up in scale and that’s impressive given how much the PS2 games tried to do on that hardware. The scale of the story is bigger too with a dimension-hopping setup and hammy villains. Captain Slag is one of the funniest parts of the game — even though he’s a side villain here instead of a main villain like before. 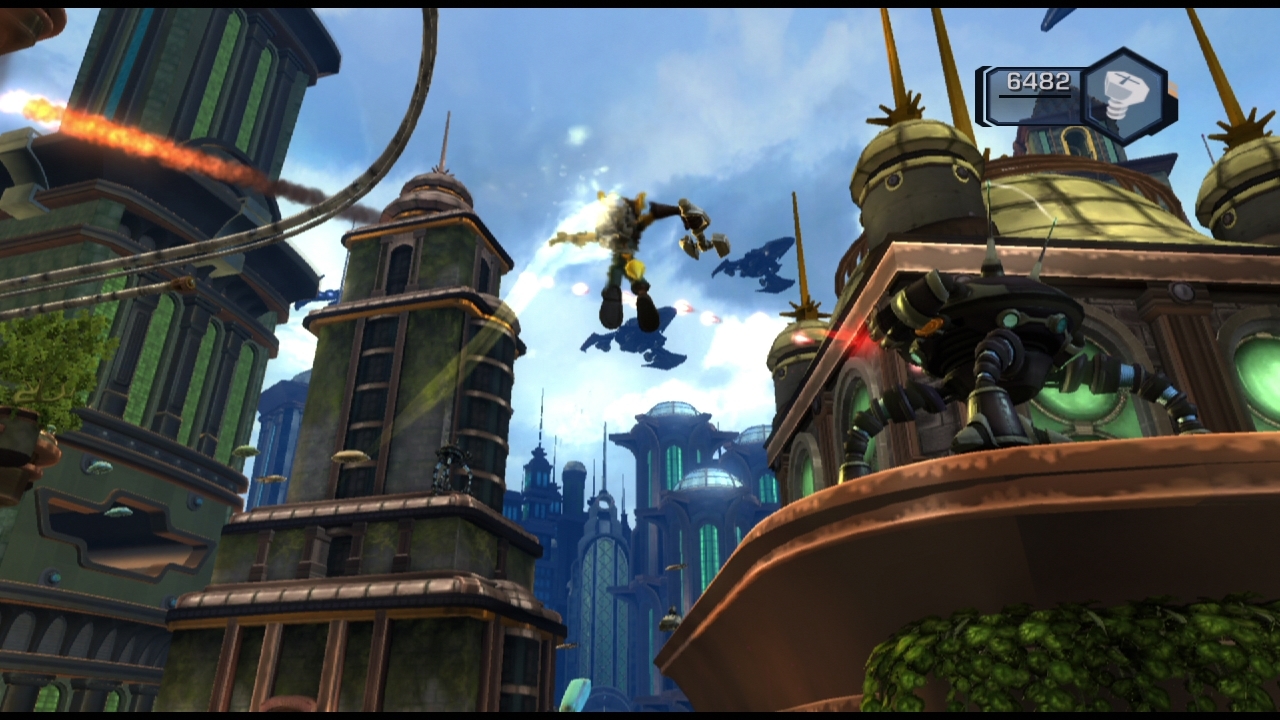 The chemistry between the main characters remains intact and Ratchet winds up becoming something akin to Luke Skywalker where he’s got a preordained destiny to save the world. Captain Qwark remains the franchise’s version of Hercule/Mr. Satan – where he’s a fake hero, but one who has heroic traits within him. The main difference is that Qwark is far more money-hungry and is more like a bounty hunter where he doesn’t really have black and white motives here — but he’s all about money and fame, so he’s up for doing whatever makes him either look the best or get the most money. The smuggler is a lot of fun and he’s got a silly Western drawl that works in stark contrast to the futuristic setting, while still being funny and enjoyable to see over and over. It’s odd that he’s the only side character that roams the galaxy as much as you, but he also has great chemistry with Ratchet, so it’s hard to argue with the odd formula winning out in the end.

The more dramatic storytelling works nicely since the voice cast has been revamped, with high-end long-running actors like Tara Strong showcasing their skills here. The story’s grander stakes wouldn’t have come across nearly as well if the cast wasn’t up to snuff, and while this isn’t the most dramatic story told, it’s still a fantastic kid-friendly story that also works for adults given its references that kids won’t get, but adults will get a kick out of. 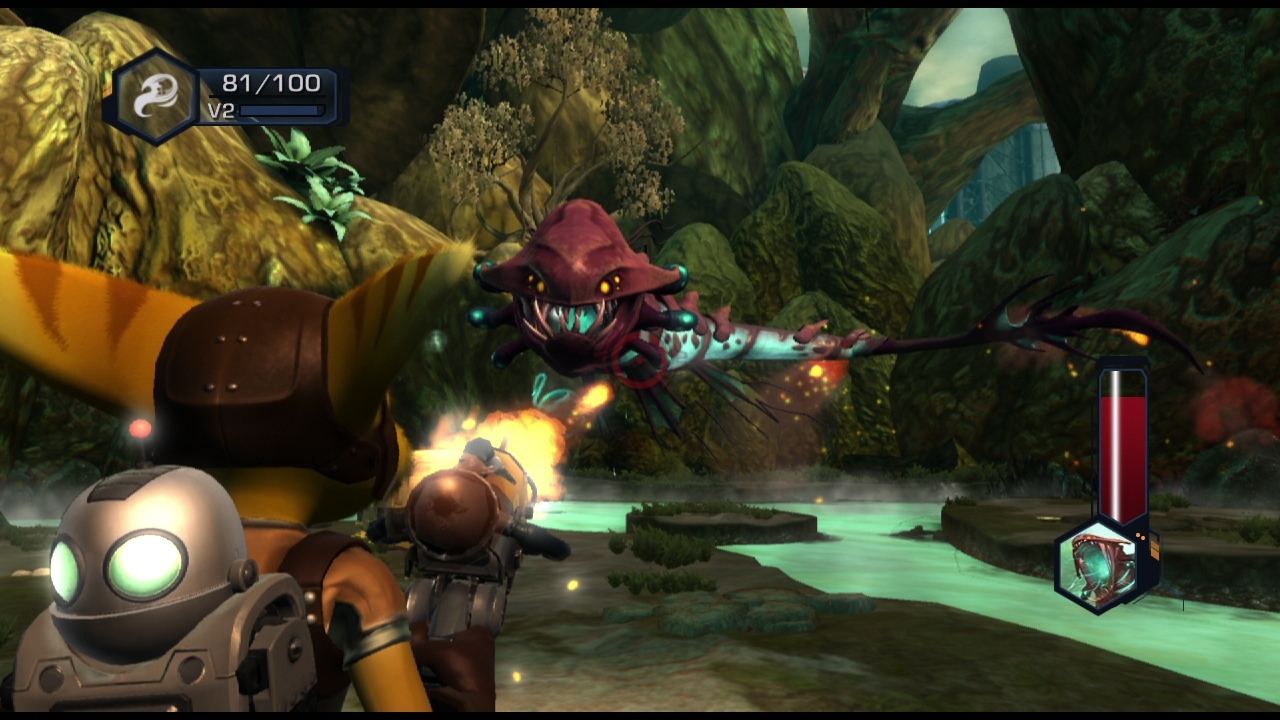 Tools of Destruction is the most-polished entry the series had seen to this point. The franchise’s mix of gunplay, melee and normal platforming was versatile on its own. Adding in things like gliders and freefalling sections alongside hook-swinging ensure, however, that you’re always either doing something new or at least a wide variety of things. Platforming sections are generally a mix of puzzle-solving alongside dedicated platforming challenges where you’ll have to do things like hop from platform to platform while avoiding lasers. Stages are a blend of arena-style shooting galleries and some are more opened up, where you can explore the stage and then fly over long parts of it to enjoy the sights and soak in the atmosphere.

You still have the ability to upgrade your weapons and that allows you to go from a normal blaster to things like flamethrowers and more bizarre weapons alongside more powerful weapons like the franchise’s resident BFG in the RYNO that deals a lot of damage across a wide area. The control layout is better here than in prior games, with a more natural bumper setup for gunplay that works faster and is a more efficient way to play if you’re coming into the series from a first-person shooter. Unfortunately, Tools of Destruction nixed the first-person viewpoint and replaced it with an over-the-shoulder view that just gets in the way. It doesn’t offer the mobility of the third-person mode or the immersion of the latter-day PS2 entries’ first-person mode. It’s kind of a weird half-step that doesn’t succeed all that well at replicating either mode and you move much slower in it than in third-person. For a game that places so much important on movement, it’s a killer in a crowded section, but still fun to use when you only have a shooting gallery setup of foes coming at you in an open area where you can at least somewhat predict where they’ll be headed. 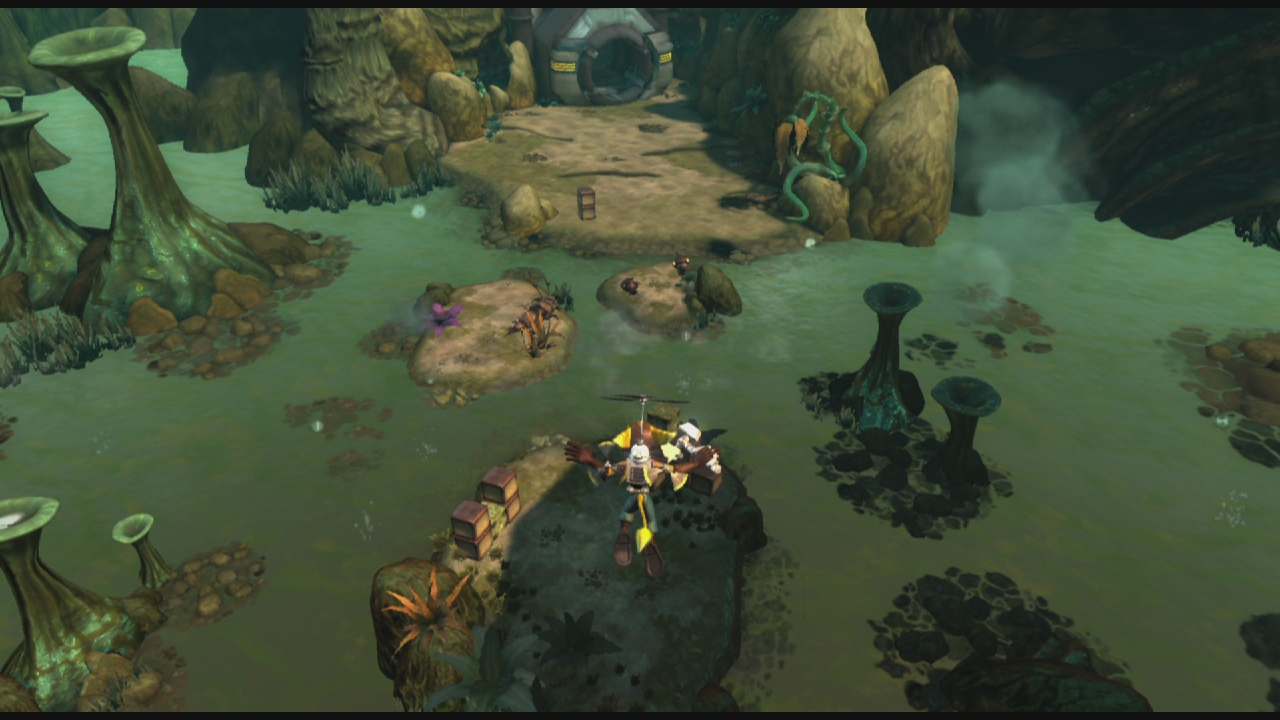 Tools of Destruction manages to still look great and much like how Nintendo’s highly-stylized cartoony look manages to hold up nicely even from something as old as the GameCube, the same holds true here. The PS3 is still capable of delivering impressive-looking graphics thanks to the game’s lush environments and silky-smooth framerates. You have a rock-solid 60 FPS here and the game’s 720p native output remains fine-looking to this day. The reflections have held up well and it’s surprising to see just how good they look for 2006 hardware. The game has a ton of mayhem going on at once and never chugs, so it was well-optimized for the hardware and it’s aged nicely as a result.

The aforementioned voice cast keeps the voice work top-shelf, but the soundtrack isn’t as memorable as past games. It’s still good and gets your blood pumping, but the Future part of things played into a few too many cybernetic effects being added in and that takes away from some of the sound. The overall sound design is impressive, though, with each weapon delivering a different sound effect — so just from audio alone, you can tell that the RYNO is going to deal out more damage than the default Cornbuster will, while the wrench remains a satisfying melee weapon thanks to its high-pitched bonk sound effect when used. 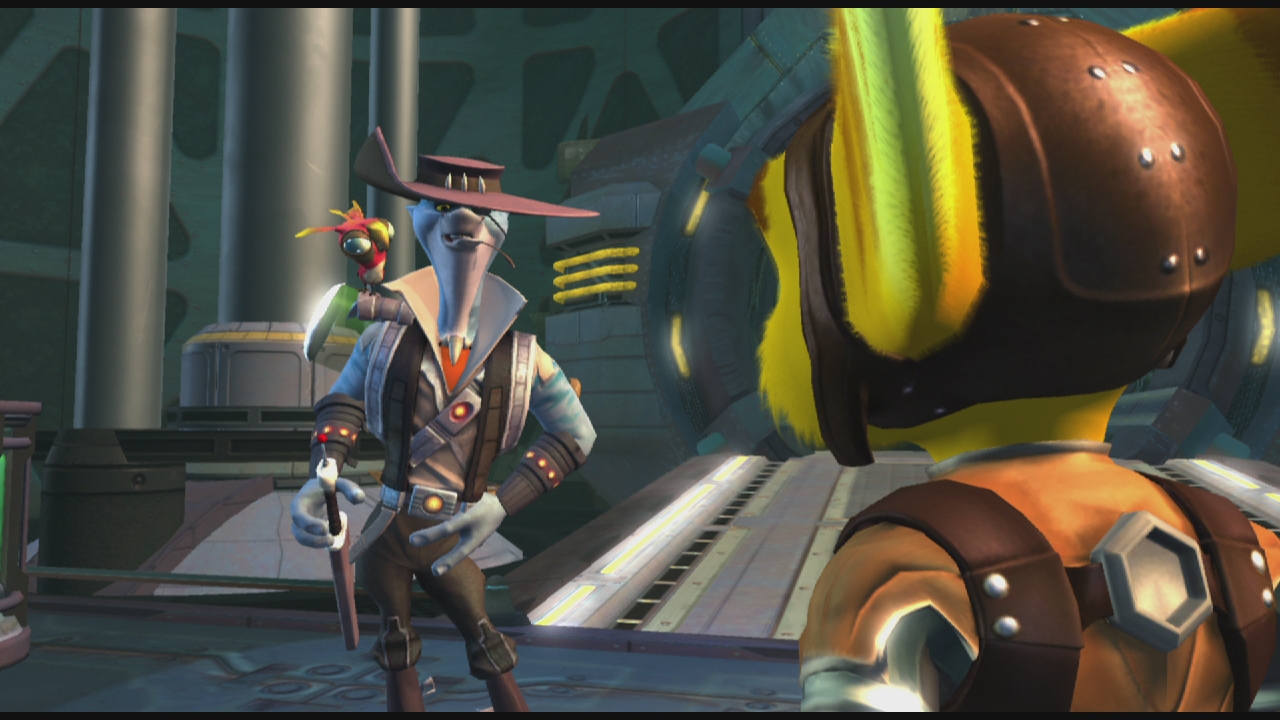 Ratchet and Clank: Future Tools of Destruction was a bold new era for the series in that it tried to do a lot of what worked before, but modernize the gameplay — and it largely succeeded both in its time and today. You could release this now and folks would be impressed by the gunplay, and it would benefit nicely from things either gyro support for aiming or Dual Sense vibration for things like the grind rails or hard impacts when you mess up a platforming section. Sony was big into remasters for the PS4 era and yet we never saw a re-release of the Future games for that platform. With the PS5 offering a nice bump in hardware power, hopefully we’ll see something like that around the time Into the Rift comes out so that players who missed out on the PS3 entries can enjoy them. Tools of Destruction is a great value and won’t set you back more than about $15 complete nowadays.