As a kid I was more than a little let down when I received the first Teenage Mutant Ninja Turtles for the NES from my parents. It wasn’t a bad game per se (mind numbingly difficult, but not “bad”), but having played the arcade game over and over again, an overworld connected 2D sidescrolling game just wasn’t lighting my fire. I had completely ignored the subsequent TMNT II NES release, but when I was excited for Teenage Mutant Ninja Turtles: Turtles in Time, my father (who is woefully technophobic) thought that Teenage Mutant Ninja Turtles III: The Manhattan Project was the Teenage Mutant Ninja Turtles Super Nintendo game that I was asking for and bought me that instead.  Yes, an NES game. I did mention the technophobic par, right? I flipped the box over and was mildly surprised to see something reminiscent of that arcade game I had played constantly as a kid. Still skeptical I slid the cartridge in, pressed it down, and hit the power button. I was then introduced to the game that I wished I had 3 years before. 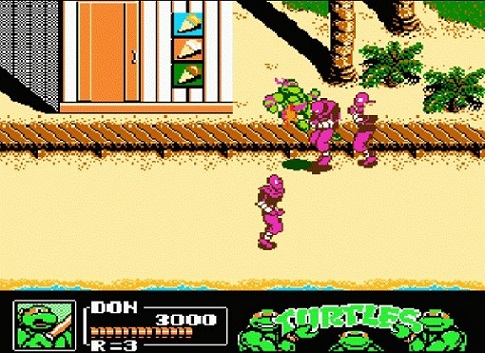 The story is pretty standard, April O’Neil is in trouble, go rescue her. Oh and Manhattan is floating in the sky for some reason. Whatever; we’re here to kick some foot soldier butt. The graphics, while not amazing, look pretty darn good for an 8 bit game, and is likely about as close as they could get to arcade quality on the NES. Seriously, anybody who grew up in the 8 bit era or before can look at these screen shots and appreciate the quality visuals that this title brought to the NES. The music is also pretty good, being catchy and appropriate.

The gameplay is out and out beat em up, as you take control of your favorite ninja turtle and take out waves of foot soldiers of varying colors that are attacking you and then moving on to the next area to do it again. The execution of this genre isn’t always easy to do, but seeing as this is Konami, it is done very well, with superb pacing and good AI that keeps the pressure on without being overly difficult. Each turtle plays largely the same, with their sole distinguishing feature being their “special move” that also drains health to prevent abuse. 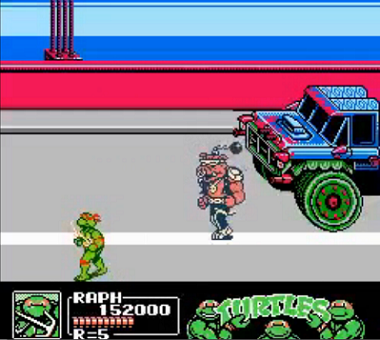 The level designs are nicely varied, with one being “on the rails” style with your turtle riding a surfboard and random baddies and electric shocking orbs popping up at patterned intervals similar to the sewer level in Turtles in Time. The bosses also offer good challenge, and are all some sort of canonical TMNT enemy. Some aren’t the most memorable (Groundchuck, Leatherhead), but you also get to fight Rocksteady and Bebop. The only real problem that I can think of for this game is there are no combo animations. Repeated hits are all the same initial swing and most enemies only take one or two hits to defeat. It’s somewhat of a letdown, but is easily overlooked.

If you’ve been on the prowl for a classic beat em up to play, look no further than Teenage Mutant Ninja Turtles III: The Manhattan Project. When the game initially released, the SNES was already out and the NES was reaching the end of its lifecycle, so it’s understandable that it was overlooked at launch. But it’s also unfortunate because of its quality. The Manhattan Project is very deserving of a place in anybody’s library and is just as much of a classic as its successor Turtles in Time is on the SNES. Give this lost gem a try and you’ll be glad that you did.