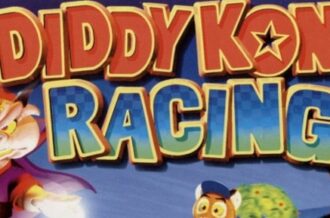 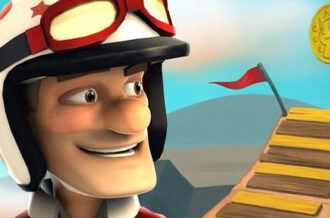 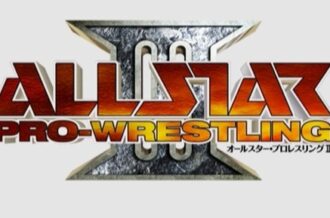 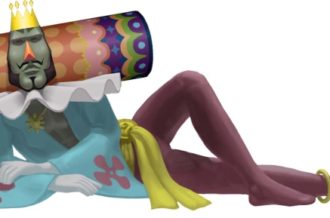 The early ’90s were a goldmine of beat-em up games with major companies like Capcom, Sega and Konami crafting some of the most memorable entries in the genre. What Technos started with Renegade and popularized with Double Dragon years before had now become a haven of licensed fare held to a surprisingly high standard. Capcom had their Final Fight games in both arcades and consoles, while Sega had Streets of Rage at home and licensed games like Spider-Man soaking up quarters. Konami relied heavily on licenses, which led to a catch 22 years later as the games made a lot of money in their day, but licensing deals expiring hurts the company’s ability to re-release them with ease down the line. Violent Storm, despite being an original IP, has strangely not seen a re-release even with things like arcade collections for consoles being a thing that Konami leans on now to re-release content to a new audience.

Violent Storm in particular is unique because it looks and feels a lot more like a CPS-2 Capcom brawler than the traditional Konami fare. Konami usually went with gimmick-heavy approaches to fighting, with things like projectiles or in the case of TMNT Turtles in Time, tossing enemies into the screen. VS is more of a reality-based game very much like something Capcom would put out, with large character models that wouldn’t be out of place in Final Fight. Like Final Fight, you have three playable characters covering three play styles. The big brute is Boris, who uses wrestling attacks and the power of his tiny jorts and giant shades to overwhelm foes. Kyle is smaller and weaker, but doles out more damage when you can land some solid combos. Finally, you have Wade — truly the most intimidatingly-named playable character in brawler history. 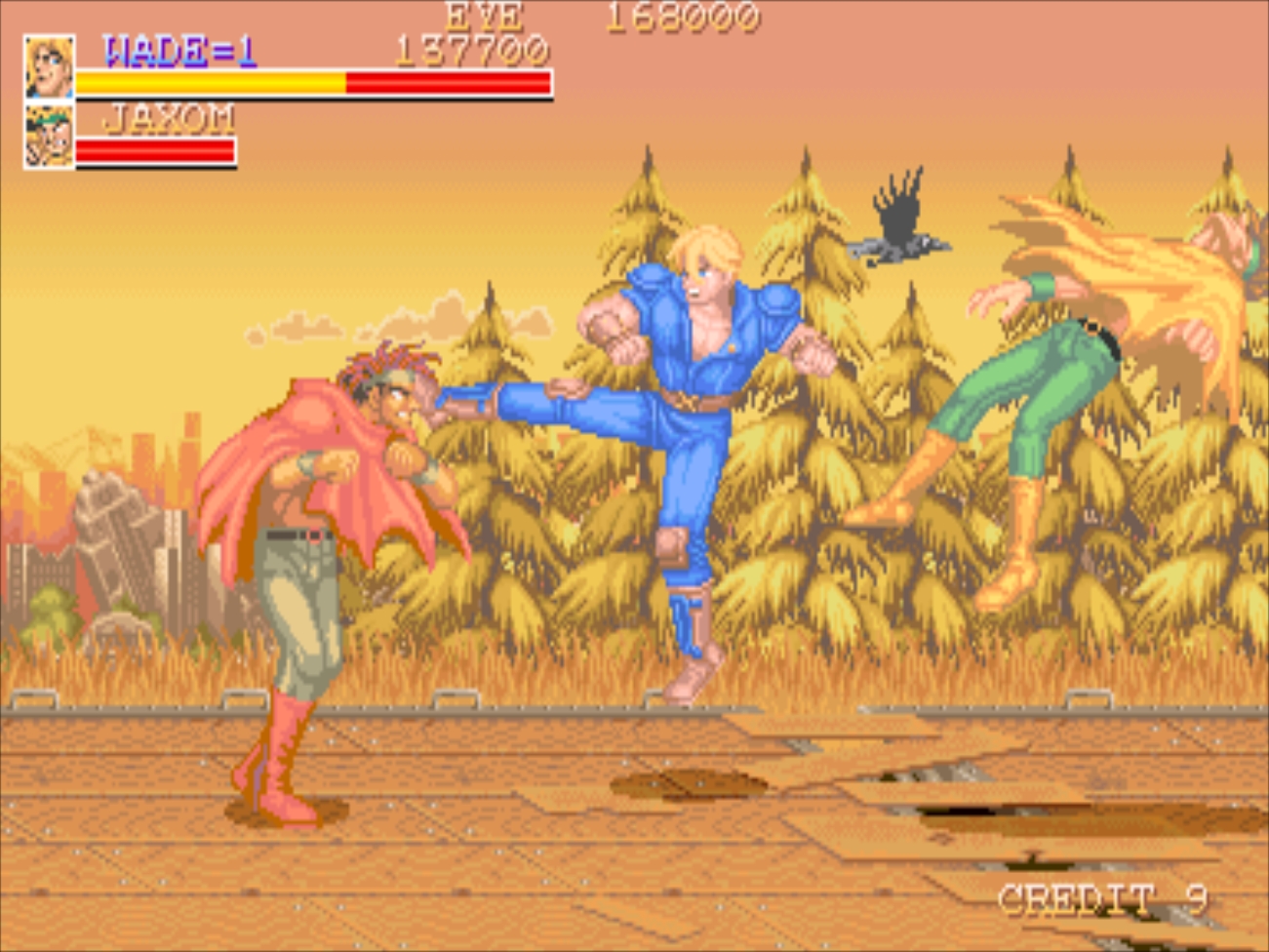 Final Fight had Haggar, Guy and Cody ,and Violent Storm has WADE. Terrible naming aside, Violent Storm delivers a brawling experience that has more polish than most not only of its time, but even today. Here you have not only the ability to dash around with great ease, but you can even attack downed enemies. Unlike things like River City Girls, you can’t really deal out mini combos to a grounded opponent, but you do have a unique ground attack for each character — so if you switch characters after a continue, things feel a bit more fresh thanks to that also factoring in to how each feels a bit different for standing attacks.

The core action features your usual fisticuffs and jumping attacks alongside many weapons. You have your usual array of knives and things like spiked maces, while environmental hazards include things like steel cages keeping you trapped against waves of foes or things like flaming metal being poured into the stage. The latter is especially dangerous as it demolishes your health bar and requires you to make use of some platforming skills — much like Double Dragon in that regard, minus being able to scale various parts of your environment to attack foes. The core combat is fast-paced and feels quicker than any Final Fight game — including the third, which boosted up the pacing bit compared to the more deliberate pacing of the first game. 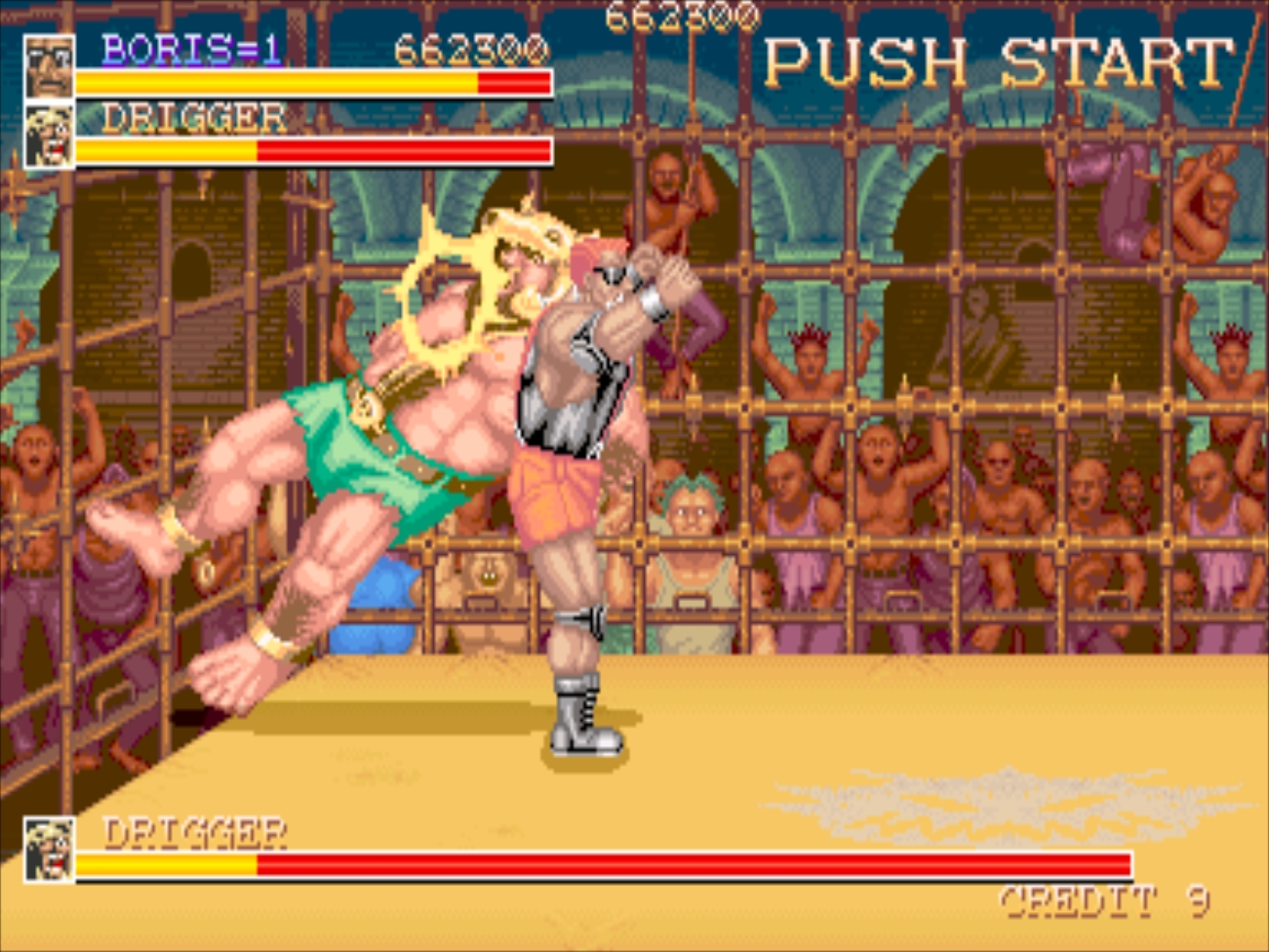 No matter which character you choose, you’ll always be able to deal out damage quickly — and while Boris may be the traditional brute, he isn’t as plodding as either FF’s Haggar or Street of Rage 2’s Max Thunder. His unique getup stands out as he’s in absurdly bright attire even by early ’90s standards. One small thing that helps the combat out is the visual contrast between every character and not only their enemies, but their environments. You don’t have to worry about any of your playable characters blending in with the backgrounds or enemies, who tend to be a bit larger and even more absurdly-dressed than the main cast. In keeping with the Final Final series using characters inspired by Andre the Giant, this game uses characters that were inspired by the Road Warriors. That’s a particularly interesting knock-off to have since the Road Warriors themselves were heavily inspired by the Mad Max series, which led to their own sub-genre of knockoff teams in pro wrestling throughout the ’80s and ’90s.

Violent Storm’s real-world setting stands out from many because of its post-apocalyptic look. You may still be out to save a damsel in distress, but you’re in a world that’s full of damage as well and the result is rather unique for the genre. You wind up with a world that feels lived in, yet torn apart. Unlike a lot of brawlers where there’s nothing going on outside of your attacks, here you can do things like attack shop stands and get goodies like power-ups — or even kick a foe off of a moving train because he’s danging his legs over the side of the car reading a newspaper. There’s a lot of interactivity with the game world and that helps make you want to not only keep going, but keep trying to attack different people and things and see what happens. 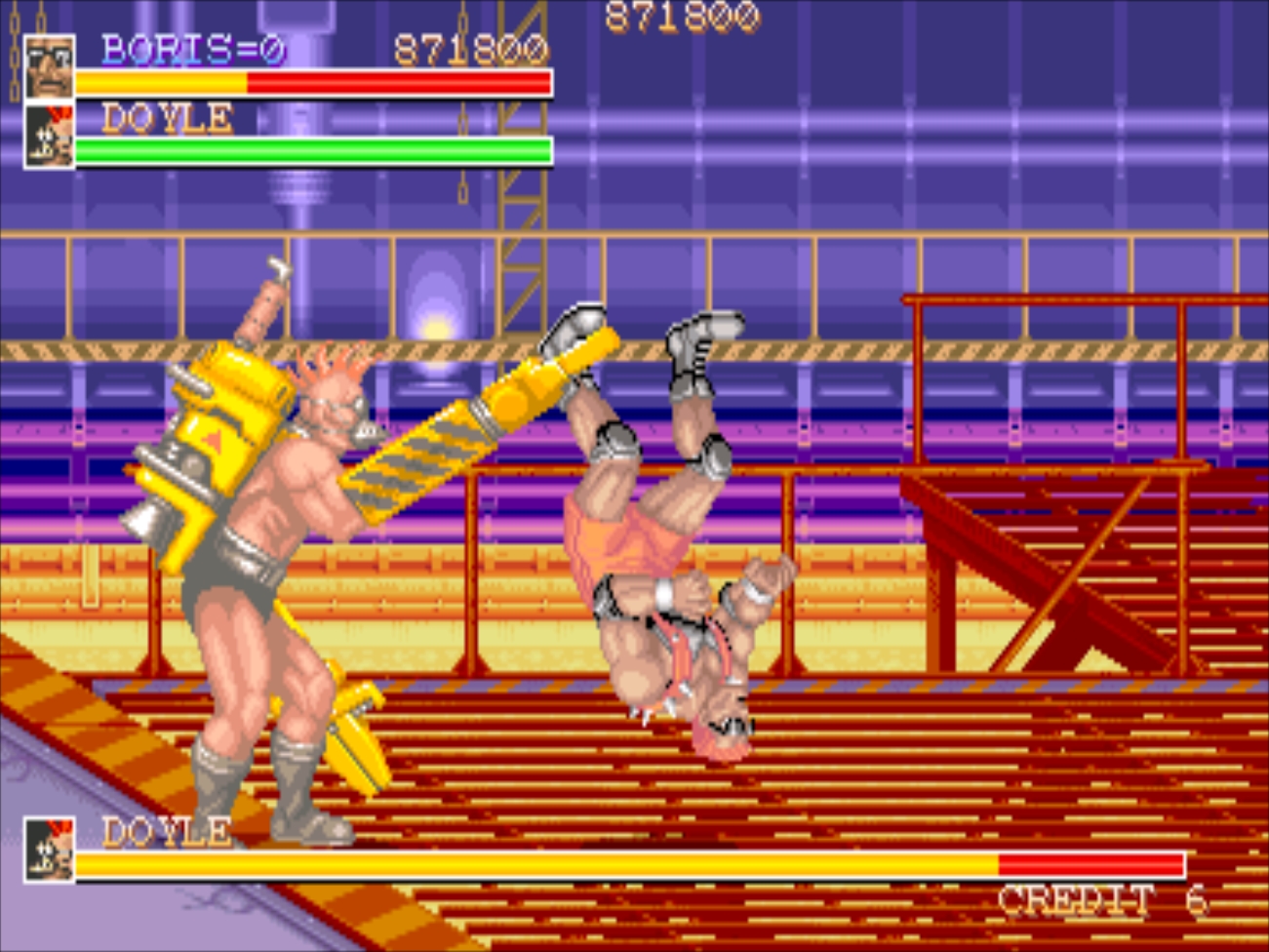 The visuals shine thanks to touches like that and solid animation throughout. You have just enough animation to give a realistic look to weapon and hand to hand attacks, but not so much that your timing gets messed up. Some animations are shoddy though — especially enemy throws. The Not Road Warriors use a bearhug that has one frame of attack animation and the rest is just you being thrown into the air. The enemy design is also worth noting as you face off with some of the most memorable bosses in the genre. You’ve got a dude in a giant speedo with metallic limbs in the smelting stage and then the most memorable boss battle is against a giant bodybuilder encased in granite called Mr. Julius who does splits-based attacks in a tiny blue speedo between poses.

One of Violent Storm’s most memorable contributions to the genre is its completely insane soundtrack. It’s a mix of pop-infused music with bits of mid to late ’80s tunes that would be at home in a Beverly Hills Cop movie alongside bizarre pop and even some goofy rap music with silly lyrics. “Feel My Power” is a highlight as it’s a rap song with lyrics that are completely based on the plot, but don’t rhyme or work in a sequence — it’s great! It’s a so bad, it’s good spectacular, but it’s always memorable and stays stuck in your head long after you’ve finished the game. There’s a surprisingly high amount of voice work in the game too — much unlike anything in the genre before or really since, as most OSTs for brawlers are instrumental. 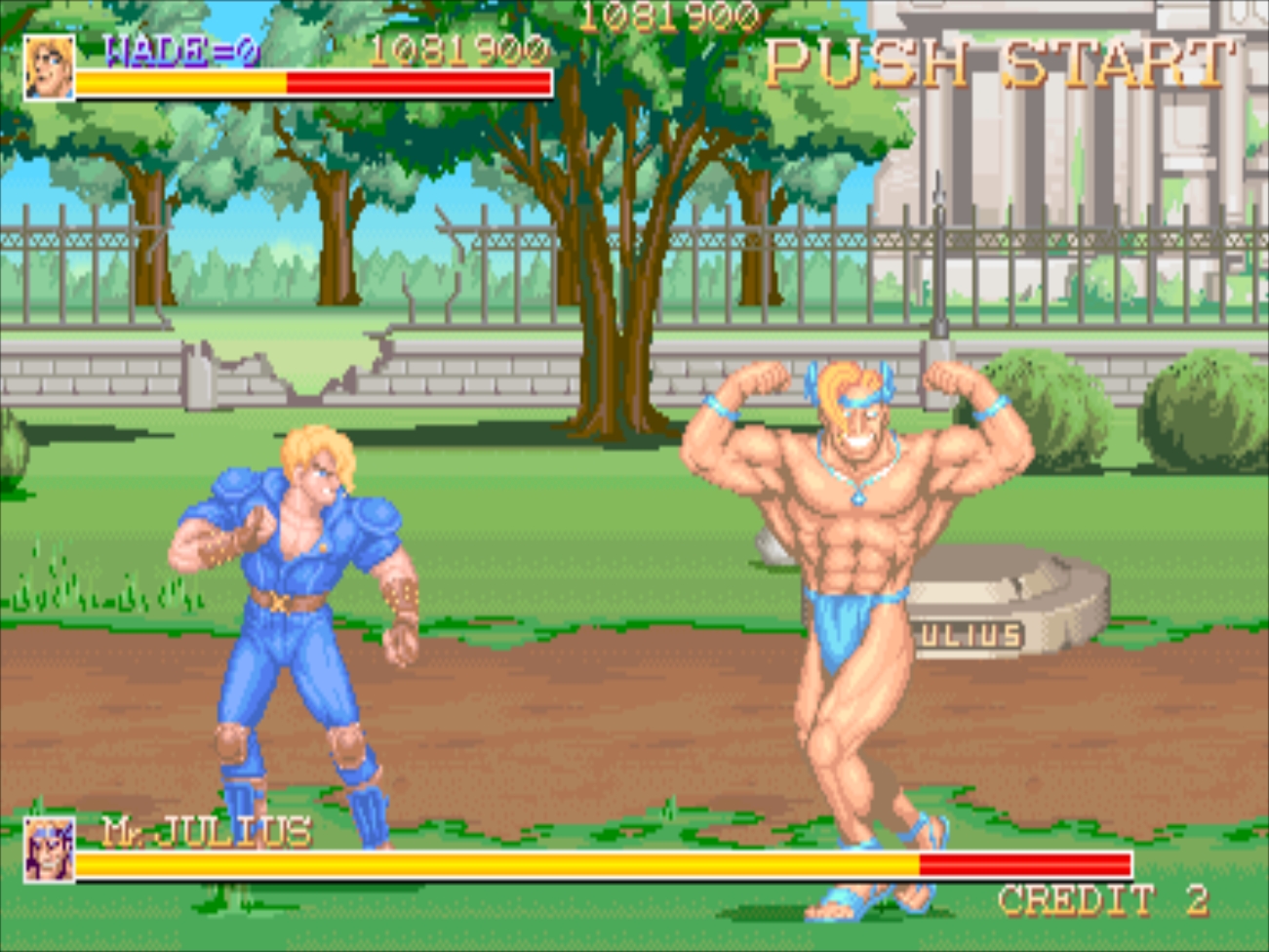 It’s a shame Violent Storm never got a home release because it would’ve been a lot of fun on the Saturn with games like Die Hard Arcade also on the platform. It would be perfect now in the era of Arcade 1UP, but I think it would find a whole new audience on the Switch as it’s a great pick up and play game where you just start up a stage, beat it and then either keep going on or take a break and blow through the rest of the game later to savor the insanity. It’s one of Konami’s best brawlers and one of the most underrated games in the genre.