Pro wrestling games have become a once a year event with a sense of sameness, but it didn’t used to be this way. Back in the N64 era, Aki crafted games that stood out greatly from one another despite having fairly short development cycles. There were around 12 months between their US-released games and a bit less than that when they were also releasing Japanese market-only games at the same time. Their first game was Virtual Pro Wrestling on the PlayStation, which featured a name and appearance-altered roster full of stars — much like the Fire Pro Wrestling series before it. It was fine, but didn’t make many waves. The N64 would be the company’s next destination and is where the Aki wrestling legacy reached greater heights.

Virtual Pro Wrestling 64 was released with an even larger roster and then downsized into WCW vs. NWO: World Tour in North America. It refined the gameplay, improved the overall flow of matches, the debut of weapons, and featured far more counter moves as well. it also debuted four player action, and resulted in Aki winning fighting game and multiplayer awards for the time. WCW vs. NWO Revenge had no Japanese equivalent, but was the single best WCW game ever made and one of the best wrestling games ever at creating a time capsule for a wrestling promotion. It featured an all-star roster of future hall of famers, and perfectly captured WCW in 1998. The game featured even more counters, allowed for finishers from more positions, and brought in a grapple>striking setup that allowed for more TV-accurate Goldberg matches and also replicated MMA-influenced pro wrestling in Japan. The Aki wrestling engine was built on a base of replicating a more sports-influenced pro wrestling style, which fit in nicely with WCW’s more serious action – and made it all the more amusing when the roster also included a Frankenstein’s monster-esque character. 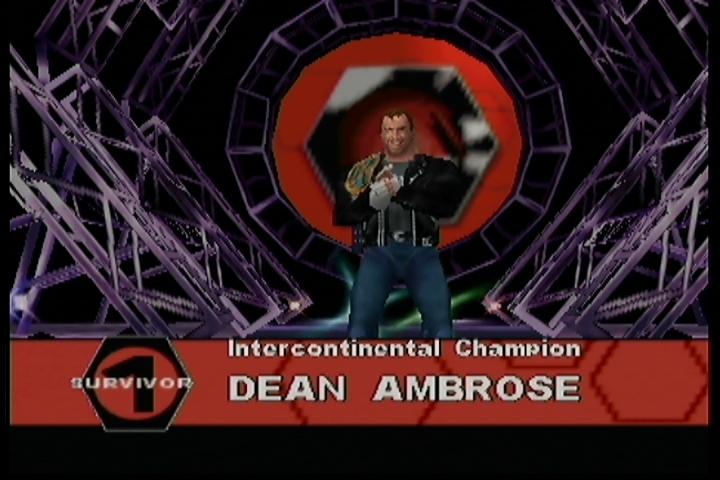 Aki’s time with the WWF license began in 1999 with the release of WrestleMania 2000 from THQ. It was nearly identical to the critically-acclaimed WCW/NWO Revenge in terms of its core engine, but added a story mode and brought character and event creation to the mix. While you could change costumes in Revenge, all that did was throw another model’s clothing on your character’s head – it didn’t allow you to fully retain say Saturn’s tattoos if you wanted to put him in Raven’s shorts. With WM 2000, you could change the roster up to keep them current or just update the game with creations. Up 16 could fit on a cartridge and you could put more on as many memory cards as you wanted. It was an excellent game overall, but didn’t improve things nearly as much as prior Aki engine games.

During WM 2000’s development, Aki also worked on Virtual Pro Wrestling 2 – which featured the All Japan Pro Wrestling license, a ton of other rosters in a legally-okay way, and the debut of a full-fledged MMA mode. It also featured elaborate ring entrances that followed the wrestlers from the locker room to the ring, and made each match feel like an event. Gameplay-wise, it meshed the Revenge/WM 2000 style with the MMA influence and crafted something that aged quite well – but not as well as No Mercy. Its revamped gameplay allows for more weapons to be used, running weapon attacks, weapon throws, moves to be done on weapons, and a more logical and realistic approach to weapon usage. Strikes also connect more fully, which is great for replicating hard striking finishes in matches. 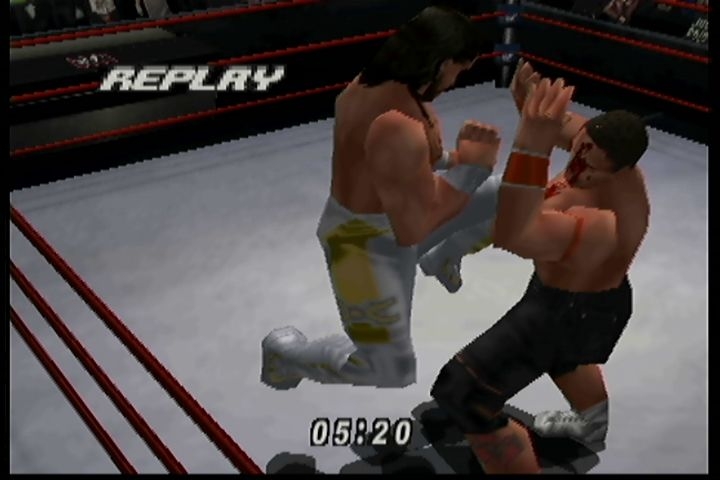 Despite the game being released in 2000, No Mercy remains highly playable to this day. While its default roster, costuming, title belts, and event arenas give it a timestamp of 2000 – the roster can be easily updated to something more current. As seen above, newer roster members like Brock Lesnar, Dean Ambrose, Seth Rollins, and especially Roman Reigns can be recreated with a fair amount of ease. The diverse creation tools are nearly perfect – except for the lack of mask and facepaint customization. This is a particularly crushing blow for Mexican wrestlers, and puzzling since VPW 2 featured an extensive mask and paint customization tool. One great thing about the Aki engine games is that everyone you make in the game is built with the same parts used for the regular roster – so they seamlessly blend into the game itself.

While the MMA content from VPW 2 didn’t make the cut, most of the move animations did – which still allows for a satisfying MMA and pro wrestling hybrid style that is perfect for the modern era. It fits Brock Lesnar creations perfectly, and while many moves have been created since 2000, you can still use substitutions that look reasonably close. The FU isn’t in this, but a basic Death Valley Driver works fine. A flapjack works as an F5, and the Lo Down makes for a perfect High Fly Flow/Five Star Frog Splash for Hiroshi Tanahashi and Rob Van Dam creations. Those wanting to have Brock Lesnar run wild with suplexes and Kimuras can do so with a plathora of belly to belly and German suplexes, while a standing armbar complete with an arm-snapping animation works fine for the Kimura. 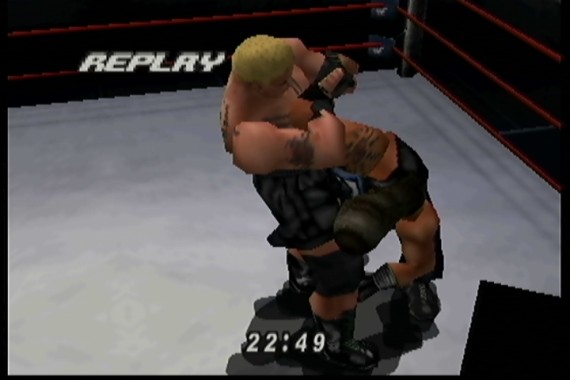 The core gameplay enhancements were great in number in fairly smalls ways that seem bigger now after years of seeing imitations come up so short. Yuke’s WWE games have had the positions in place for years – but it took until 2015 for them to surpass No Mercy’s offerings in seated position moves – and even then, no game allows for better-looking seated kicks to the back and seated dropkicks. The tree of woe has dozens of moves available, including shots that can knock people out in No Mercy – but less than half a dozen are used in WWE 2K16. It’s a small part of the overall game, but it does a lot towards making pro wrestling games seem more like a replication of what it would be if pro wrestling was real, and it allows the game to replicate action from just about any era or company.

The mode selection was overhauled and allows for ladder matches – a gaming debut here. They’re a bit limited in terms of the crazy things you can do now, but also feature more organic action. Now, doing something like a spear off the rig isn’t a bit deal. Here, you can do stunts – but you have to earn them. Doing a swanton off a ladder through an announce table requires planning (and at least a few kneeling sleepers to KO an opponent). Thanks to the revamped weapon usage, you can now do moves onto ladders – and it results in a sickening sound effect. Playing with the Hardys against the Young Bucks can result in some crazy-fun matches, while having Brock face John Cena in a hardcore match leads to some nasty German suplexes onto steps, broken tables, and whatever else you can find in the crowd. 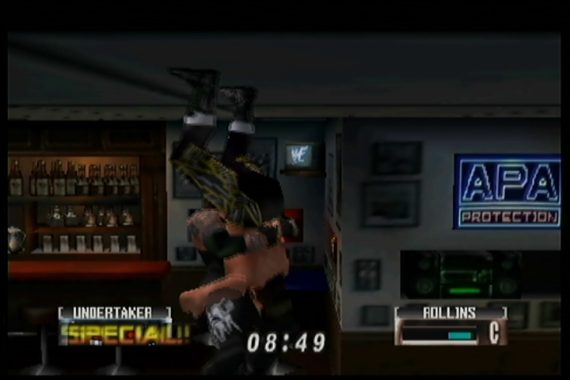 Backstage brawling didn’t debut here, but it was pretty much perfected. SmackDown on the PS1 gave you various areas to fight in, while Mayhem gave you different-looking giant squares to fight in. SD at least gave you different surfaces to fight on, but the lack of impact made everything feel like a farce – much like how nothing in that game actually appearing to connect. You start going backstage by throwing enemies to the ramp, and then into a hallway with different areas. You can just Irish Whip them, or more realistically toss them onto their backs into the next area. Fighting on the ramp lets you throw people back and face-first into the tron, while the backstage hallway allows you to throw people into the cement walls.

The boiler room gives you access to more cold steel, while the locker room lets you fight on and break tables – and just like on the announce table, you have room to do a lot and can even do double team grapples or knock people off them and either set them up for a move from your partner or hit them hard and send them flying onto a grounded object. You can also stack things on the tables and do moves onto them for even nastier finishes. The pool hall is another unique area, and gives you a pool cue to hit people with, a wall fixture to throw people into, and a pool table to throw people through. The parking lot area is great as well, since you get a giant gate to throw people into, a fire extinguisher to use, and the back of an 18 wheeler to throw people into, or fight in the back of and execute sick slams and suplexes onto the wooden base. 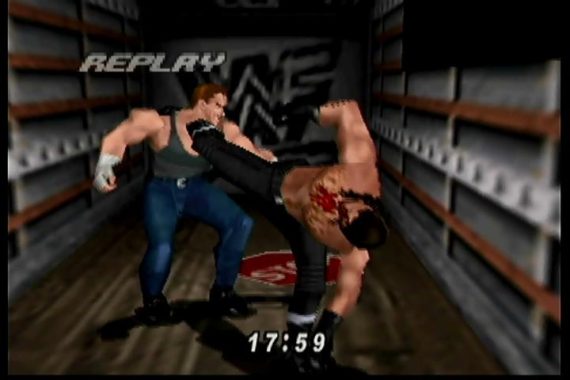 WWF No Mercy excels at replicating pro wrestling better than any prior Aki engine game. It’s such a shame they didn’t continue making games for pro wrestling groups, but instead had to do games for Ultimate Muscle and Def Jam Vendetta – which were good, but never quite achieved the level of in-ring greatness as their prior games. With New Japan Pro Wrestling’s rise over the past few years, it would have been a great time for an Aki-engine NJPW game, but that didn’t happen. Aki is now Syn Sophia and hasn’t had a console release since Ready 2 Rumble:Revolution on Wii. It’s a shame, but at least they’re still around and No Mercy is so good that it can be updated easily either with the core game, or with its extensive modding community as well. It’s common to find and not too pricey either. It’s a must-play for anyone who hasn’t tried it out, and like all the other Aki games, fits the N64 pad perfectly and actually feels odd to play the game with anything else.