The early ’90s were a turbulent time for pro wrestling in the United States, with scandals rocking the industry and attendance falling across the board. The company did still have enough momentum from the ’80s boom to remain a force in gaming, however, which has remained the case to this day. While Acclaim and its subsidiaries generally handled the console games, Technos Japan handled its arcade games. WWF Superstars was a short tag team-centric affair that captured a small portion of the ’88 roster well, but it felt like a rough draft. It wasn’t until 1991 that the definitive WWF arcade game was released — WWF WrestleFest.

This took the tag team formula from Superstars and expanded upon it. Beyond having a tag team mode that was basically the same as Superstars – go through a set amount of bouts and then face an unplayable boss battle tag team, it refined things and added a solid amount of new content. Movesets remained simple in theory, with only two buttons for a punch and a kick – but context changes your grappling. If the match is just starting, you will do a forearm exchange before holds like snapmares and slams will be used while more advanced signature moves will be applied when enemies are worn down. No one has an elaborate moveset, but there are some nice context-based things that make the in-ring action flow smoothly. 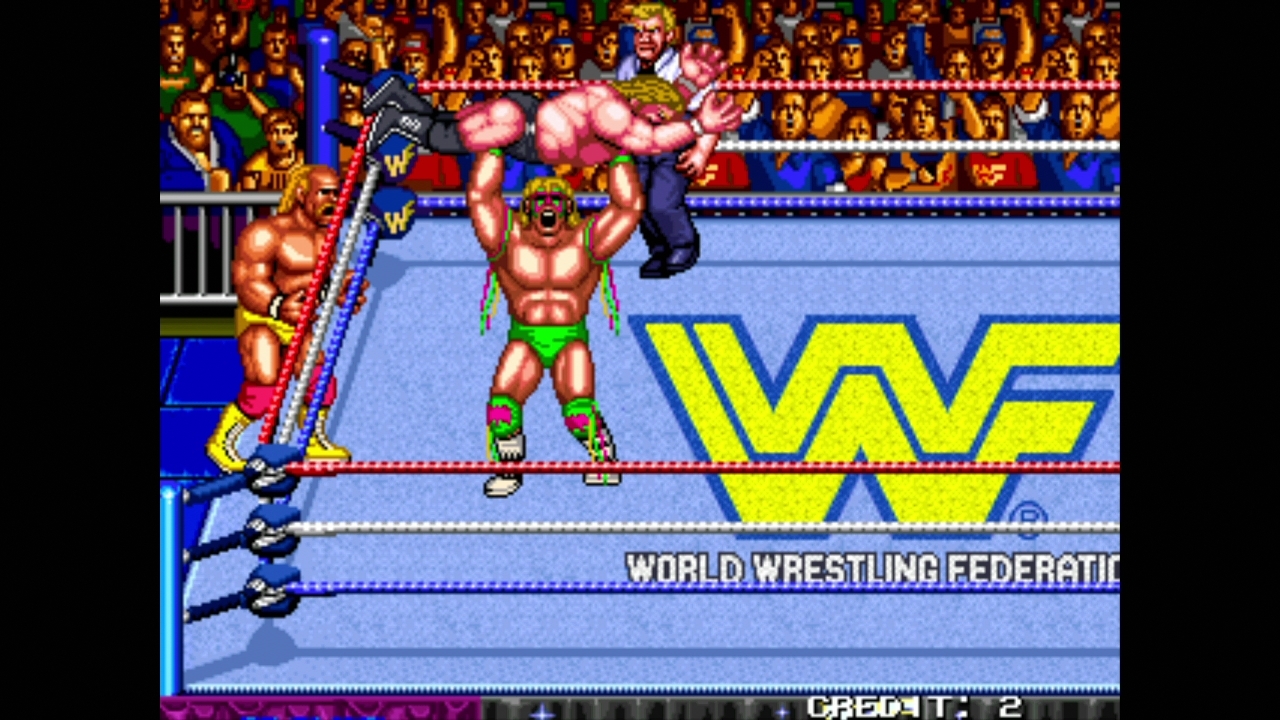 In tag team matches, you can grab someone from the apron for an attack from your partner – or you can be the victim of it. You can also grab a downed opponent and pin them down for stomps or put an opponent in a headlock and set them up for a big diving axehandle from your partner to deal heavy damage. A downed opponent can either be stomped or hit with a flying elbow by hitting both buttons. Each character has custom moves for when a foe is really worn down – signified by them being in a nearly-vertical position on the mat to open the door for a bigger variety of moves like flying splashes or even Earthquake’s signature vertical splash.

Submissions can be applied by pressing both buttons near the legs, showing off moves that weren’t normally seen in games at this time – like Ted DiBiase’s Mid-South Wrestling finisher the figure four leglock. The in-ring personality of the roster was captured quite well – and better than in most games before or since. The Ultimate Warrior darted around uncontrollably, while Mr. Perfect used precision and punctuates his moves with arrogant posing. Perhaps unsurprisingly, the cartoonish nature of the WWF at the time really did allow for a cartoonish portrayal to work far better – beyond the winning team playing patty-cake after a win, that remains kind of weird even if it is hilarious. 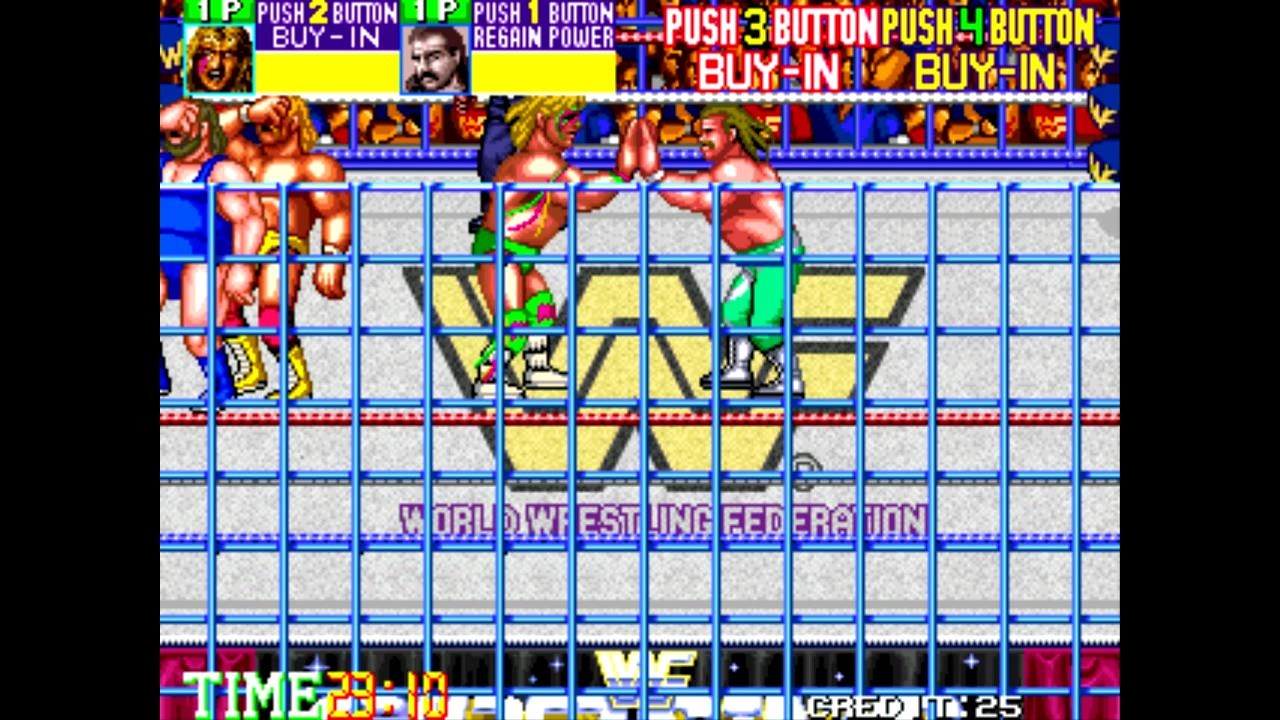 The tag team mechanics work shockingly well, and when it comes to actually providing smooth team-based gameplay, it’s better than most games released since then. However, the game has more to it than just tag teams – the Royal Rumble mode is one of the best virtual versions of that mode ever. While its limited roster doesn’t allow for a full 30 character run through, it does feel rewarding to beat the mode and I love that you can earn a pin in it to advance. Conversely, this means that you also need to be on your toes – because one crediting it in the arcade was nigh-impossible and running low on health meant that you could pump a quarter in for a life refill in either game mode.

The Royal Rumble mode is pure chaos due to how many characters on-screen at once. This may seem like a bad thing, but thanks to the large sprites, it’s never really tough to find your character in the pack. Aiming for any one foe isn’t really possible, but aiming in the general direction of someone will at least result in some blows landing and then probably leading to some grappling moves if you’re lucky. Moves can’t be interrupted mid-stream outside of counters for things like splashes, so there’s no worry about starting a move only to have it undone by someone nearby. 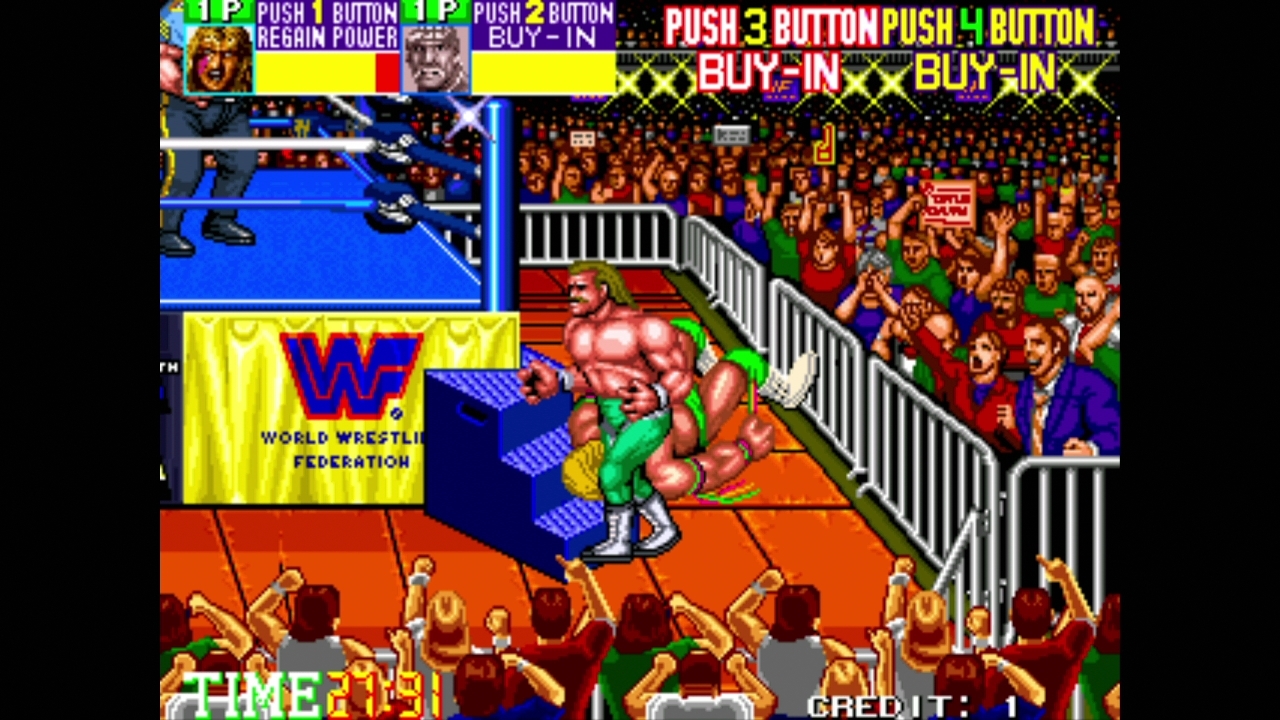 As a wrestling game, WrestleFest was limited in some ways, but always fun. Even now, over 25 years later, it remains fun to play. Its presentation is nearly perfect for its era, and little things like commentary and voice clips added to the charm – even if they weren’t good. The dreadful voice impersonations for “Mean” Gene Okerlund and the Road Warriors are some of the worst of the era – only not quite as funny as Magneto’s “WELCOME TO DIE” from the X-Men arcade game. The music is fast-paced and intense, but it’s a little surprising that the original theme songs weren’t used for it.

Visually, the bright color scheme used for the game has held up nicely and there is a lot of detail in the sprites. Proper proportions are also something many games today fail to get right, but here, everyone looks about how they should and feels right as a result. Earthquake is a mountain of a man and moves slowly, but with purpose. Mr. Perfect is fast and agile, but his moves don’t do as much damage and his offense generally feels less damaging per-move. The Ultimate Warrior’s power and frantic pace are done perfectly with his running, while Hogan’s power-centric offense is on display with most of his moveset. 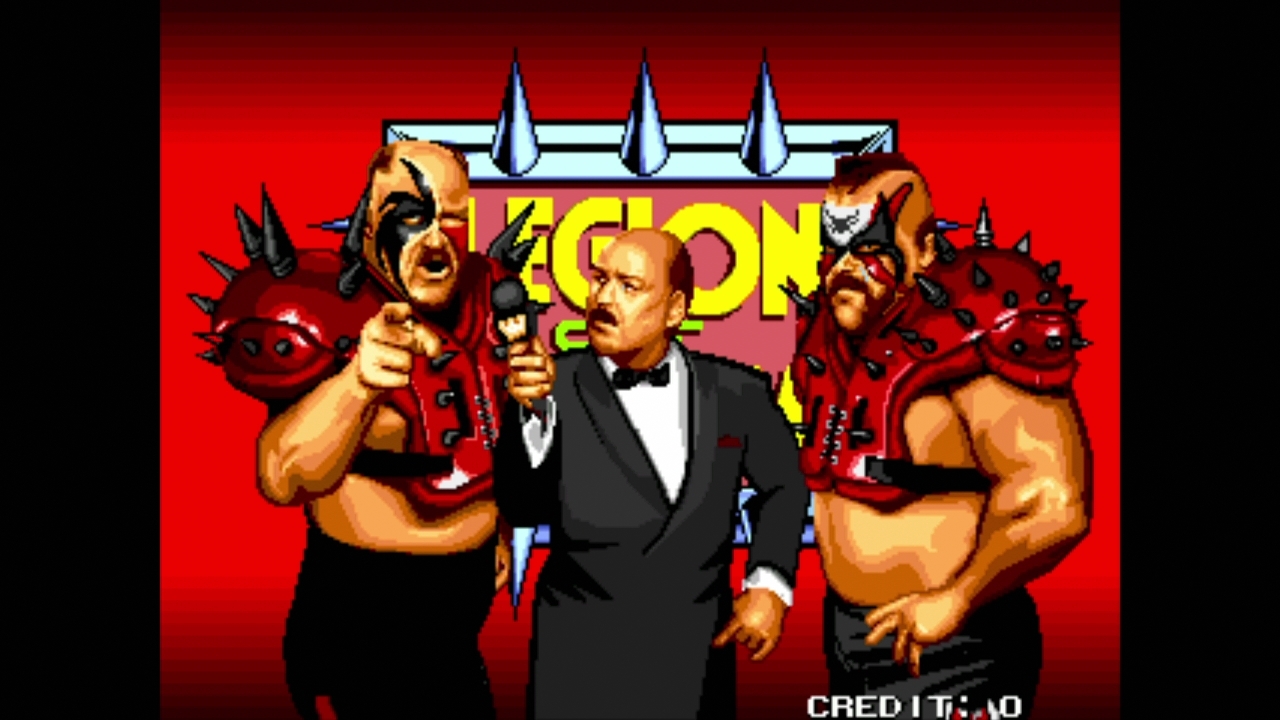 WrestleFest is a satisfying game and one that remains worthwhile to this very day. It’s a shame it never received an official port and only remains playable via emulation – but an iOS remake of sorts was released a while back. It featured limited offense, an expansive roster, and more modes, but failed to really capture the feel of the original game even if it got the look down fairly well. It’s a bit like the shot-for-shot remake of Psycho – you can paint by numbers just fine sometimes, but it doesn’t feel the same or evoke the same feelings.

There were rumors of an Xbox 360 remake of the game via XBLA, but that never came to be. Odds are, it would have been like the iOS game – only with controller support since it was rumored around that same time and they had already put the work in to make a revamped version. It’s a shame that WrestleFest is seemingly doomed to never get an official release, but like many arcade games, that just makes actually playing it in arcades that much more fun. Crowding around a cabinet with a soda between each player’s portion of the machine was a bit of a tradition – as was pooling quarters whenever possible to beat the Road Warriors at the end.

Thankfully, programs like MAME allow the game to live forever in some form, so while you may never play the game officially again, you can at least enjoy it and craft your own memories. They may not be the same as those in arcades who may have played it as it was on its last legs in the corner of an arcade in the late ’90s or maybe even enjoyed it in a prominent spot in the early ’90s, but they’ll be fond just the same. No matter when you played it, it left you with an impression and stood tall as the best arcade wrestling game of its time — and arguably the best arcade grappler ever.