Given that the name of our retro feature is the graveyard, it’s kind of hard to believe it took so long to feature Zombies Ate My Neighbors in it. It’s easily the best sendup of classic monster movies gaming has ever seen, and one of the funniest games ever without a word of dialogue (unless screams of terror count). Beyond lampooning ’50s sci-fi and horror movie conventions, it’s also a bit funnier in hindsight since the then-current playable male character basically looks like a parody of a ’90s kid with his red and blue 3D glasses, skull t-shirt, and giant spiked hair.

The core game is essentially an overhead shooter, except for when it’s a PURPLE HULK SMASH sim, and when you’re blowing up zombies with soda grenades. I’m not quite sure what’s in those things that makes them explode, but perhaps they’ve already got some Mentos inside – or TNT. ZAMN is designed around 2-player co-op and unlike a lot of games of its day, you could play this with multiple people without using split-screen and without having to worry about someone holding you back since you’re pretty much always going to be headed in the same direction to save people. 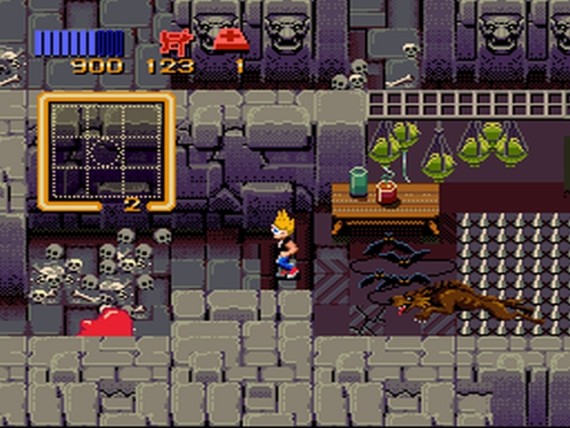 The on-screen radar shows you the location of the neighbors you need to save. Sometimes, only a few will be present, while other stages have ten of them. For some reason, they’ve decided to travel along with you to hedgemazes full of chainaw-wielding maniacs in Jason masks, pyramids with mummies, and GIANT CASTLES WITH VAMPIRES, WOLFMEN, AND BLOBS. As long as you save at least one person, you can move on to the next stage and passwords allow you to skip around in groups – and they’re only four characters long too, so they’re fairly easy to remember.

It’s tempting to hop around from area to area, but doing so comes with a price – you’ll be stuck with stock weapons and have to play perfectly to get some good items on your side. By playing through the game stage by stage, you can rack up power-ups and stockpile weapons and items like a bazooka or the potion that turns you into the purple non-Hulk monster to do damage and actually have a prayer against the swarms of enemies that occupy later stages. This means that while you’re technically able to see the stages, you won’t be able to do much in them because you’re underpowered compared to where you would be if you’d gotten to the level through sheer grit and determination. 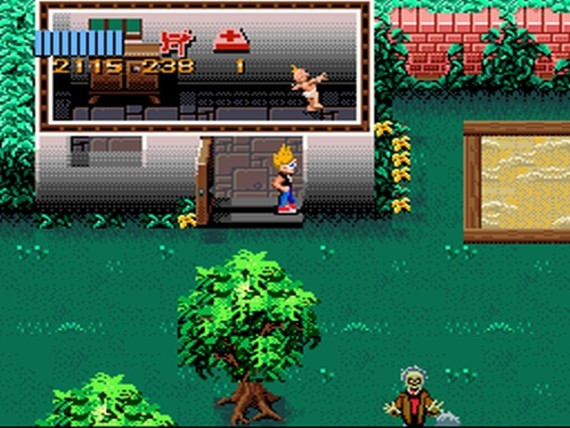 This setup greatly encouraged co-op play because with a second player, you stood a far greater chance of beating each level. You could map out a plan to have each person focus on a different thing – one could hunt for items and weapon pickups, while the other focuses on enemies. These are things you can do on your own, sure, but they’re easier to do when paired up with someone since you don’t have to worry about spreading yourself too thin trying to avoid enemies and also grab items. The challenge means that every stage beaten honestly brings with it a huge sense of accomplishment and knowledge that you actually stand a chance to not only beat the next stage, but the whole game – even if it means beating a football field full of alien duplicates of your own characters.

The game’s soundtrack was another huge highlight, with screams from both playable characters being nice and clear and the heavy use of a theremin-style soundtrack helping the audio fit in with the monster and sci-fi movies it largely parodied. The great thing is that they didn’t just rip off old music, but were inspired by it to make some surprisingly fast-paced monster movie-style tunes that have some zip to them, but don’t make everything into a farce either. They found that fine line and walked it perfectly, and the reward was a soundtrack that holds up nicely 20 years later.

Zombies Ate My Neighbors hasn’t exactly been forgotten – it did get a Wii Virtual Console re-release, but it would really benefit from a modern remake. Sure, Monster Madness: Battle for Suburbia tried to do something like it, but it didn’t have anywhere near the level of polish ZAMN did. An HD remake would allow everything to be kept that was great while expanding on it. Online play would be a natural fit, and twin stick controls would work fairly well too. With its overhead perspective,  fast-paced action, great music, and high difficulty, ZAMN reminds me more than a little bit of Hotline Miami – only without Deloreans and drug addicts. Anyone who can find a SNES or Genesis copy should give it a shot – or just buy it for $8 on the VC. It’s one of the most enjoyable co-op experiences of the 16-bit era, and well worth player in 2013.