As much as kids from the Nineties dug the word cool and platformer mascots with cringe worthy “tude” (read our feature on the epitome of all things rad: Cool Spot), they also dug toilet humor just as much, snickering at the mere mention of the word fart or booger. I, too, was one of those kids and I can’t explain why such unsightly bodily discharges were amusing, they just were. I see the kids today and they barely care for it, but then again cartoons have become so politically correct and clean. The world where kid shows like Ren & Stimpy ran amok on television is long gone.

Back then, however, the kids loved gross things and the suits and ties working in the video game industry took note of this hot steaming pile of a trend. While toilet humor would spill into a lot of video games and even their advertisements as a consequence (wait was Mario a plumber because… no! it couldn’t be!), none made it the focal point quite the same way as Boogerman: A Pick and Flick Adventure did in 1994. Boogerman: a hero for the kids, but a nightmare for their parents. 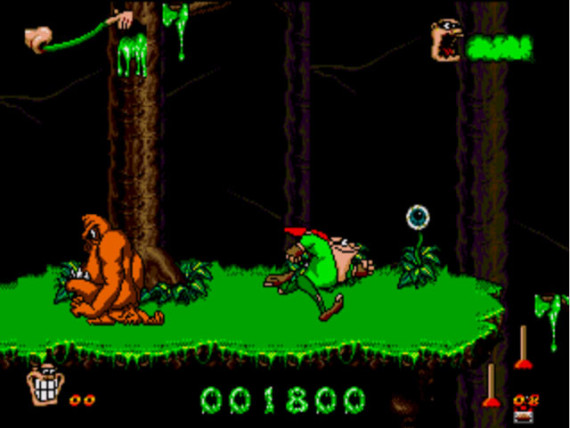 A fairly standard platformer at its core, but with an overdose of bodily discharges (I know your mind went there, get your mind out of the gutt… oh wait) defining the enemies, levels and even the titular character’s main abilities. Boogerman’s main arsenal involves flicking his boogers as projectiles; he also farts and burps excessively with sound effects that brought a chuckle out of all of us rotten kids back then. You explore a number of unforgettable sights throughout the adventure such as the scenic Mucus Mountains and the majestic royalty that is the Pus Palace. Real subtle.

Behind the layers of sewage and waste lies a pretty typical and serviceable platformer, with the gross shock factor lasting about as long as toilet flush. I can’t imagine there being any place for something like Boogerman in this current gaming landscape.

It failed to reach its goal. No sh… poop, Sherlock. No poop.