Benjamin Rivers is no stranger to successfully tapping into the horror indie scene and creating an experience that resonates with fans. After all, the developer received praise from critics and fans when the horror title Home first arrived on PC in 2012, which would be followed up with a release on iOS devices in 2013. Rivers, however, continued to push out his unique horror experience to other platforms and announced in 2014 that the indie hit would come to PlayStation 4 and PlayStation Vita in time for Halloween. Just as the independent developer couldn’t overlook the significance of Halloween with horror gaming, it was only fitting that Rivers’ latest project, Worse Than Death, would leap from the App Store to console and PC in time for All Hallows’ Eve this month. 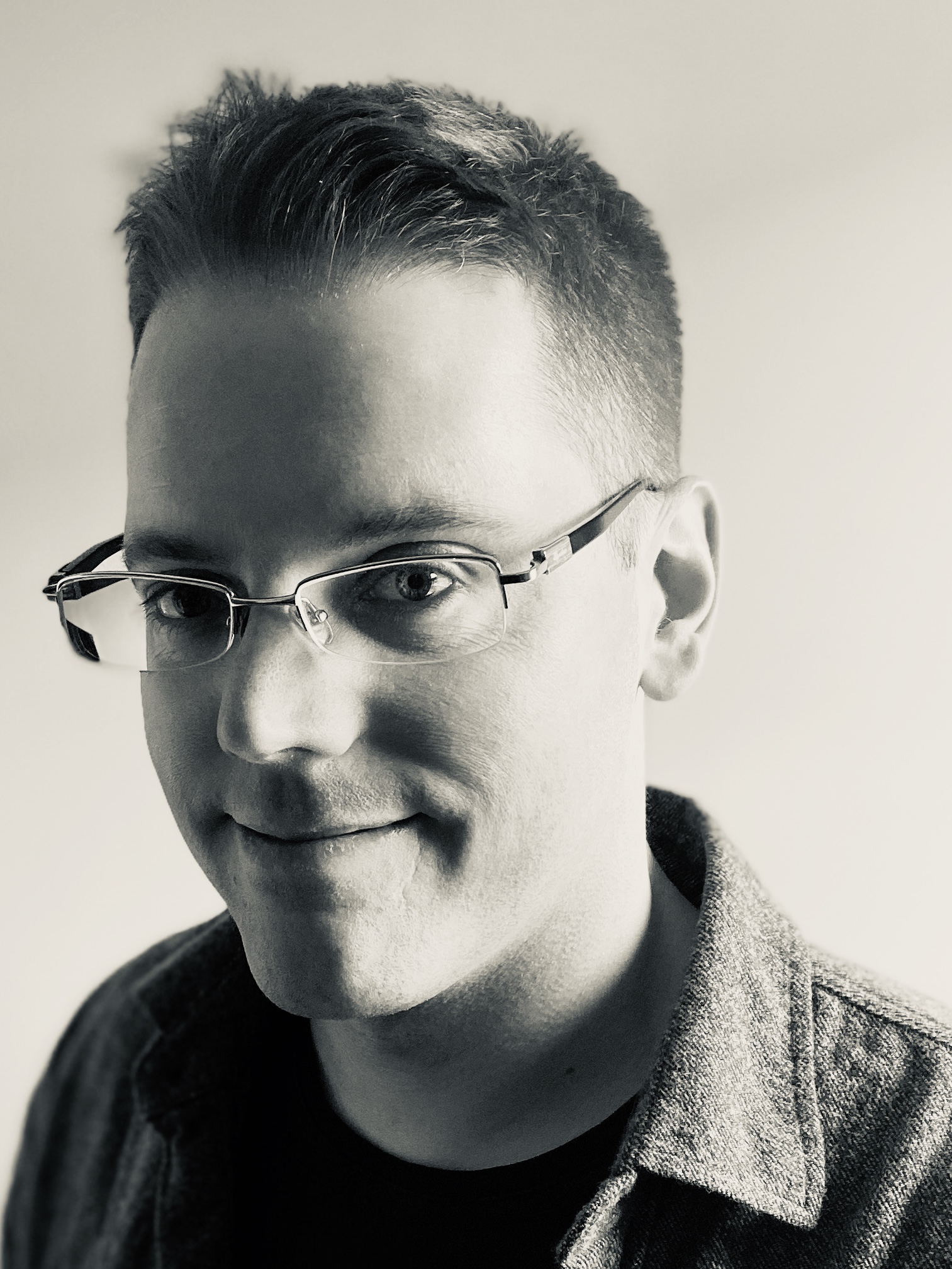 Rivers brought the world of Home to life through its pixelated visuals and the Canadian-based developer would retain that same aesthetic for Worse Than Death. But the developer merged the pixelated visuals with a unique comic-book aesthetic, saying “horror comics were always a huge influence” and hoping that players could see the “Tales from the Crypt roots creeping in.” The story of the title has players transported into the shoes of Holly, who’s returning to her hometown for her high school reunion. Unlike the simple — or somewhat difficult — task for some people to return to their old stomping ground and see those faces from their adolescent years (for better or worse), Holly’s reunion doesn’t unfold as plan. Players are quickly tasked with keeping her alive, using their quick-witted instincts to solve puzzles and helping her to survive against the unseen horrors hunting her down.

Hardcore Gamer had the privilege to catch up with Benjamin Rivers after the release of Worse Than Death on console and PC. Mr. Rivers opened up about the concept of the horror title, what makes it stand out from its competition, Holly’s design and representation and the importance of bringing Worse Than Death to Nintendo Switch.

[Hardcore Gamer] How did the concept for Worse Than Death emerge? What was the inspiration behind the story and setting?

There were a few key pillars that we decided very early on when coming up with Worse Than Death: first, the game had to be 2D with stealth elements; second, it had to be briskly paced like an X-Files episode; and third, it had to be in your face and gory.

The setting, however, was always the same: it’s a twisted version of my own hometown! I drew on local legends and rumors, a few real events and the unfortunate fact that I had just missed my own high school reunion. So we thought, ‘What might have happened there?’ And then we just ran with it!

There are plenty of horror indie titles out there on the market. What makes Worse Than Death stand out from its competition? And what can fans expect to be different in Worse Than Death compared to other horror experiences?

The two biggest standout features are a tight story and a focus on moving quickly. There are a lot of horror games that are about slowly plodding along, and we like those too. But we wanted to create the interactive version of an X-Files episode, where the situation is changing all the time, you’re always running from one scene to the next and every puzzle you solve or clue you find is an important revelation that pushes you ahead.

A lot of horror games (even ones we like) take a really, really long time to tell a very simple, minimal story — and usually, by the time you’ve finished the game, you’ve forgotten how all of those spread-out plot points connect. We wanted to keep your heart pounding for a few hours and for you to get a great payoff at the end, but then go discuss the game with other players to sort out the finer details. 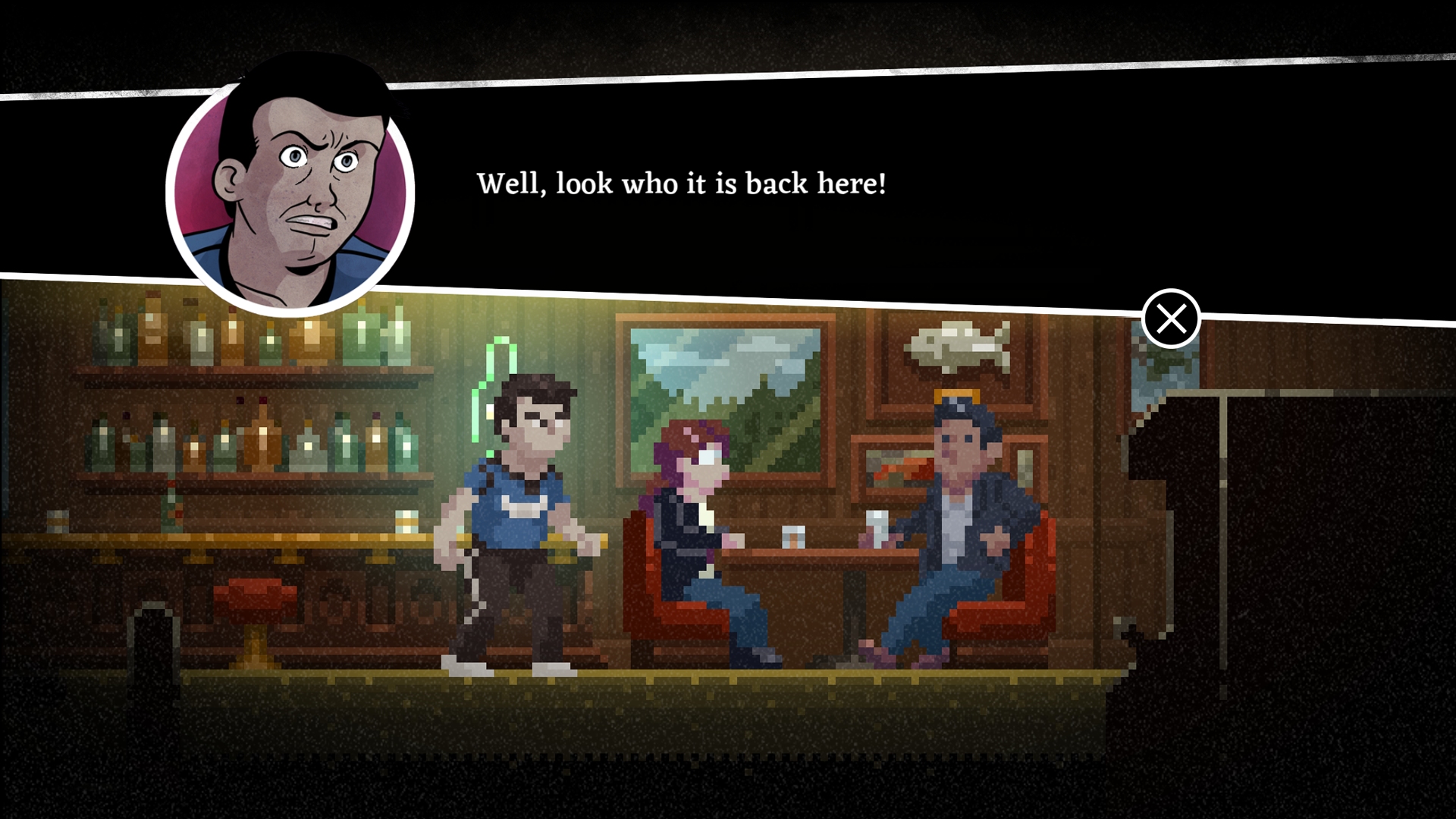 The bar scene from Worse Than Death. Credit: Benjamin Rivers

You made the transition from action-adventure horror with Home to sci-fi adventure with Alone With You. What was the experience like shifting from horror to sci-fi in gaming?

After creating Home, it was exciting to take what we learned and apply it to a different genre. But even Alone With You was filled with dead bodies and terrible events, so I suppose we never stray too far from horror — no matter what we do!

So we knew eventually we’d come back to making another horror game — and to be honest, it was like putting on an old pair of comfy shoes.

Why the emphasis on running away from the enemy rather than allowing players to utilize combat and fight back against the creatures in Worse Than Death?

We think having a distinct disadvantage against your enemies provides a crucial element of fear, dread and panic. Furthermore, running from the enemies mirrors one of the game’s themes, which is running from your fears. It didn’t feel right to have Holly armed with weapons — and technically speaking, who’s to say those enemies are even really there? Maybe there’s nothing for Holly to even fight back against… 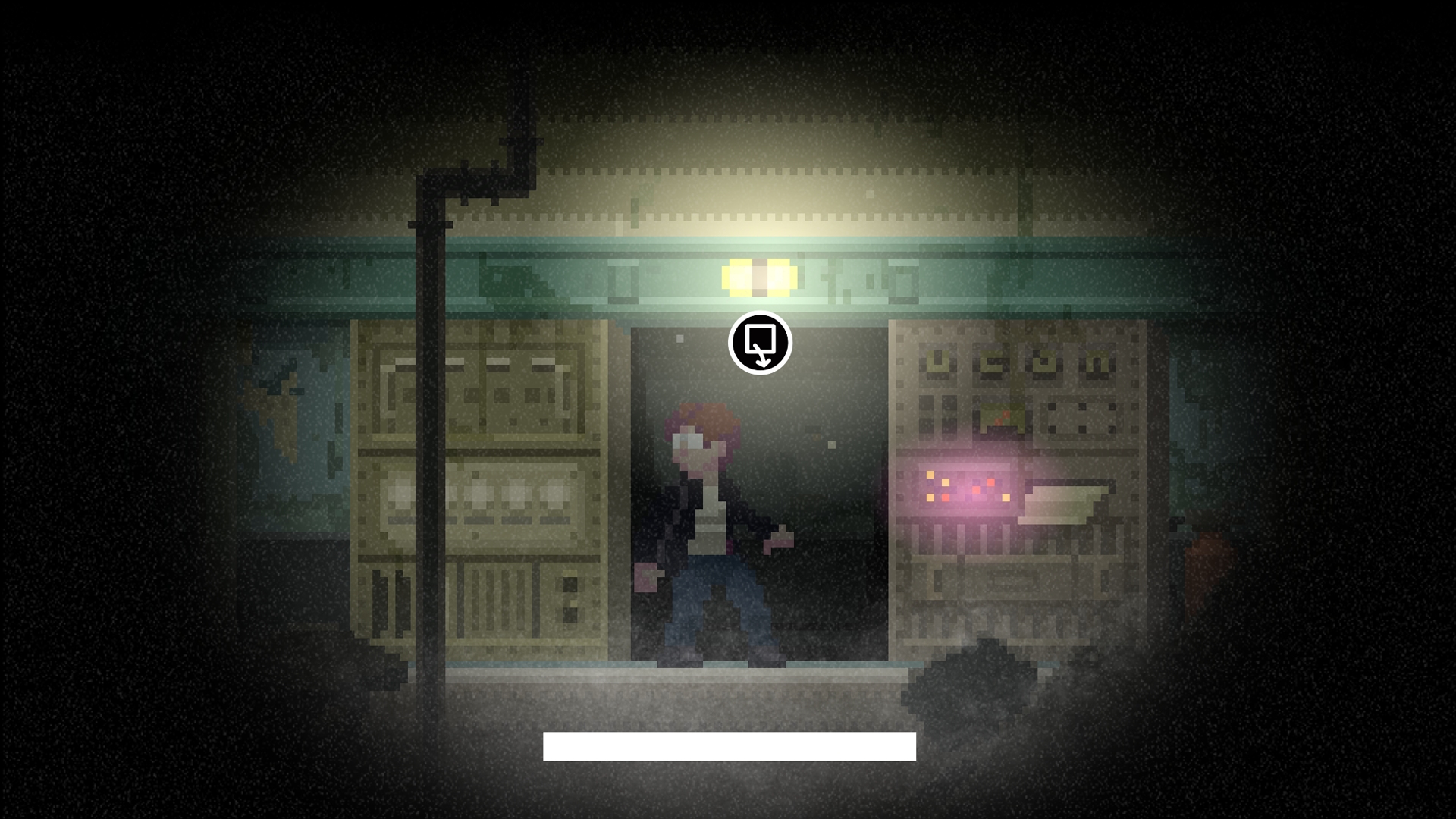 Worse Than Death protagonist Holly is hiding as the enemy tries to hunt her down. Credit: Benjamin Rivers

Speaking of the enemy, players can’t see them and have to rely on Holly’s heartbeat, the light and sound as a warning sign when they’re coming for them. What was the reason behind having the creatures cloaked in darkness?

One of the reasons pertains to the story: what the monsters look like isn’t important, because it’s all about what they represent to Holly (and the player); we wanted to make sure the players could add their own interpretation here when discussing the game with friends.

The second reason is a practical one: as soon as you see a monster, it becomes immediately less scary (especially with the pixel art style of the action scenes). We actually designed and tested several monster variations that you could see, but once we put in the 3D audio — and the environmental reactions to the monsters’ location — we realized you didn’t need to see them at all. It was scarier to watch the lights, your Panic Bar and listen to the sound cues. The day we made the monsters mostly invisible was a huge revelation; everything just snapped into place [after that].

Tell us a bit more about Holly. The gaming industry has often been criticized over the lack of female protagonists and their representation. So, with that said, what features were you keen for Holly to embody and was there any discussion over her final design and representation?

The funny thing about strong female protagonists is that they’re a mainstay of the horror genre. There’s even an old term for it: ‘final girl’ — meaning, the survivor in a horror movie is usually a woman, and often not the character you expect to be the focus (a great example of this is [Ellen] Ripley in Alien). And like most interesting characters in horror stories (male or female), we wanted Holly to be relatable, perhaps flawed, but someone you could root for. She starts off in a fairly vulnerable place; you know she’s got something on her mind, she’s dreading the events to come and she doesn’t seem very sure of herself. But once the action gets moving, she’s forced to step up to the challenge, and by the time you reach the final chapters of the game, we hope players will notice that Holly’s pretty kicka*s.

Her arc is demonstrated through the player’s own actions — Holly kicks a*s because you kick a*s, and you’re getting better at the game as you progress. Since you need a certain amount of skill to finish Worse Than Death, we wrote Holly’s dialogue to match where the player would be. Everything’s a freaky mystery at the beginning, but by the end she’s putting pieces together and making declarations because we know the player would be, too. You’ll notice she’s a lot more decisive by the final chapter. 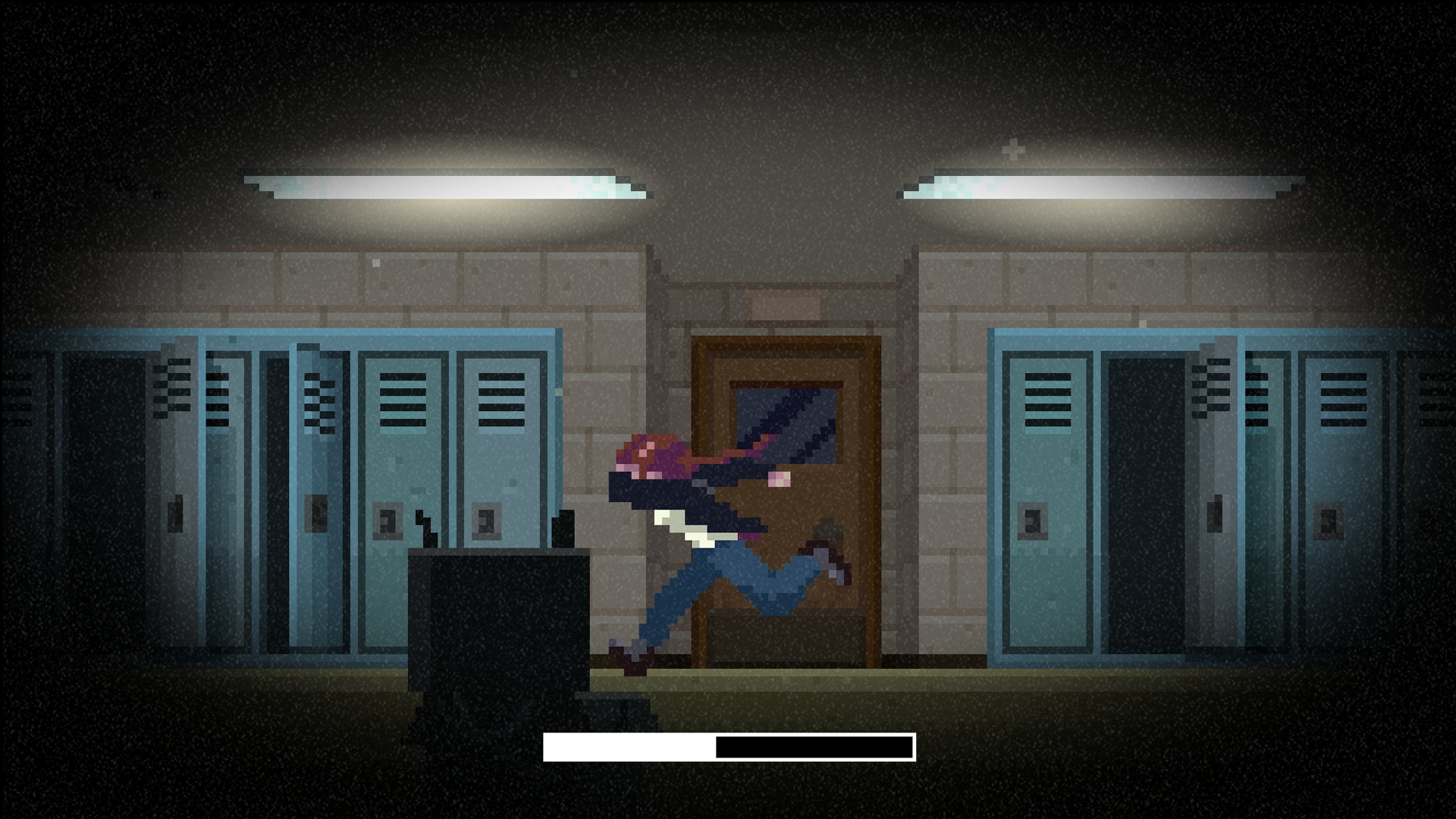 The development team wants players to “notice that Holly’s pretty kicka*s,” according to Benjamin Rivers.

How important was it to choose the comic-book aesthetic for Worse Than Death and were there any worries with how it would work with the horror theme of the title?

We never worried about how it [would] work because horror comics were always a huge influence. You can really see, I hope, the Tales from the Crypt roots creeping in. Classic horror comics taught us a lot about telling fast-paced dark stories with fun twists, and so we made it an early goal to embrace that heritage and represent it visually.

The other factor was on production; all of the comic-book-style art in the game was done by hand on an iPad Pro. This was impossible a few years ago, but we quickly realized we could make art so quickly, the way we were accustomed and use all of our experience in telling comic-book stories. Once that clicked, we doubled the amount of art and puzzles we were planning to include in the game.

There are a lot of horror games that are about slowly plodding along, and we like those too. But we wanted to create the interactive version of an X-Files episode, where the situation is changing all the time, you’re always running from one scene to the next and every puzzle you solve or clue you find is an important revelation that pushes you ahead. –Benjamin Rivers

This interview continues on page two, as Benjamin Rivers talks about Worse Than Death’s release on Nintendo Switch, a potential sequel for the title, the triple-A horror title that had a major impact on him and the idea of Switch ports for Alone With You and Home.