Final Fantasy XI today marks its eighteenth anniversary. Originally released in 2002, Square Enix’s first MMORPG hit the ground running on PC and PS2 with a 2006 release on Xbox 360. At the time, Final Fantasy XI received widespread praise thanks to its graphical capabilities, in-depth story and wide breadth of content. All these years later, the game still commands a loyal player base despite a successor (Final Fantasy XIV) available on the market. We got a chance to speak with Director Yoji Fijito and Producer Akihiko Matsui about Final Fantasy XI’s history and the legacy it leaves behind.

[Hardcore Gamer] Let’s travel back in time to 2002. What was it like launching an MMO on PC and PS2 in that time period? Looking back, was there anything you would have changed about the process?

[Yoji Fujito] Back then, everyone — including developers and players — were not as familiar with the internet as we are now. It was already interesting that we had this new internet infrastructure with which people could exchange information on. On top of that, we had FFXI making its entrance as a game with its own story, world and themes — all of this combined felt like an important event, even for me on a personal level.

Looking back today, there isn’t anything I completely regret, or anything I think on and wonder if I could have done it. On the contrary, I want to pat myself on the back for getting through it.

[Akihiko Matsui] First and foremost, let me explain how the development team was originally formed. It was actually three teams that were originally developing titles for the PlayStation who were brought together to develop FFXI. Even when we transitioned from creating Super Nintendo games to PlayStation games, the number of staff on each team grew drastically; but with the FFXI team we had three times that number.

Having so many people on the team was one of the reasons why the development was challenging, and I also remember it was difficult to exchange and align our views since each team had its unique development culture. Ultimately, most of the members from the Mana series team — which I was a part of — left the FFXI team for other projects, and most of the new designers ended up coming from the Chrono Cross team. Looking back, I wish we had communicated a little better amongst the staff, including talking about personal matters, too. 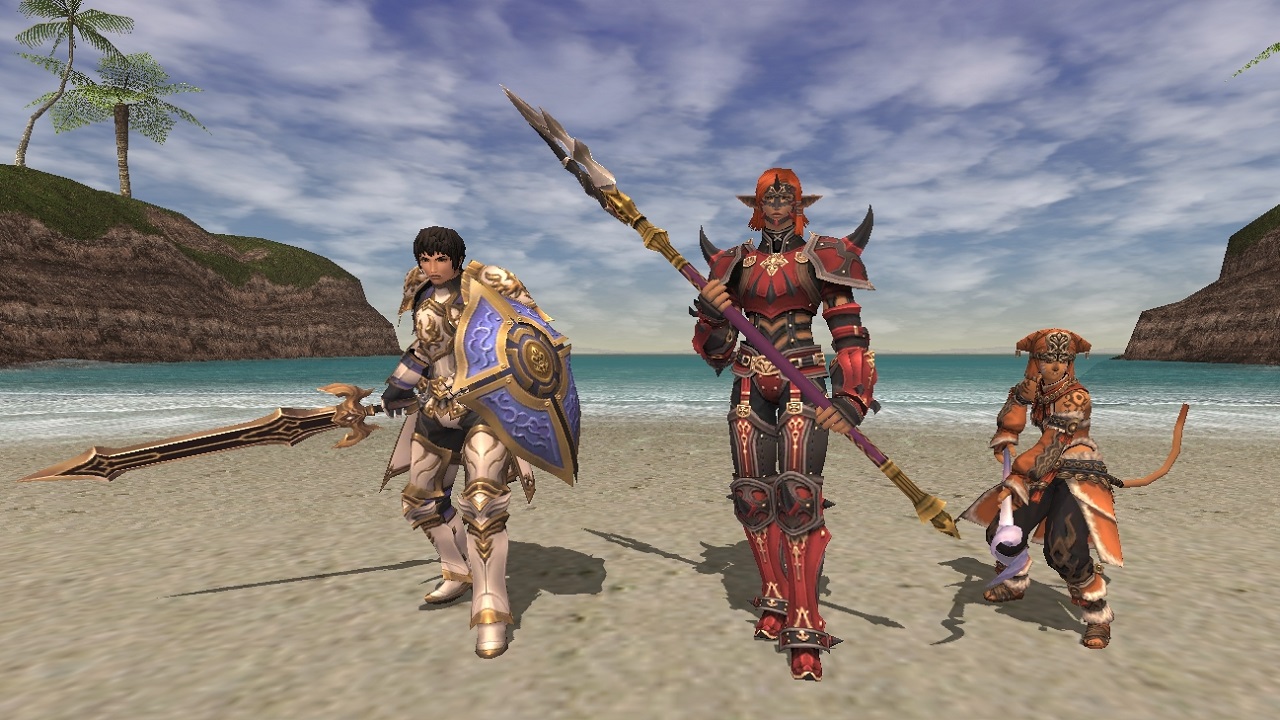 Final Fantasy, at the time, was entering a brand-new era with the release of PS2. Final Fantasy X’s 3D environments, voice acting and realistic character models forever changed the way players perceive a traditional Final Fantasy game. XI would take that further by bringing the experience online. What was going through your head at the time while developing the series’ first MMO?

[YF] “What exactly is an MMORPG?” — that’s a question that I repeatedly asked myself, over and over. In the FINAL FANTASY series, most of the installments follow a story in which you control a character with special powers to save the world. On the other hand, in FFXI, players controlled an “ordinary” character for the first time in the series.

It seems players felt the game was quite different from past titles in this regard, and they were also faced with some anxiety arising from the fact that there were a large number of other people with them in the same world. They may have thought, “How does this character go on to achieve greatness?” or “How do these other players that I’ve formed parties with come into play in the storyline?”

The Vana’diel that you’re experiencing right now is the answer to these questions.

[AM] Though the PlayStation 2 has higher specs than the PlayStation, due to the nature of MMORPGs, the maximum number of players that could can potentially be on screen in the same space is quite high, making it difficult to have total control over any given situation. This is why the number of graphic resources we would use for a single character ended up being much lower than what the designers had anticipated for a PS2 game. I can imagine the designers were quite disappointed by this, but they made it work within those boundaries, and we were able to create a game with the level of quality that’s still relevant today, even after 18 years. I think this is quite amazing.

On a personal note, with the transition from Super Nintendo games to PlayStation games and the increase in the amount of data we could use, the time and cost it took to manage the graphic resources became quite significant. It was nice to be put in an environment in which I could focus on the planning and production of the game itself by taking on the challenge of working on this fairly new MMO genre. 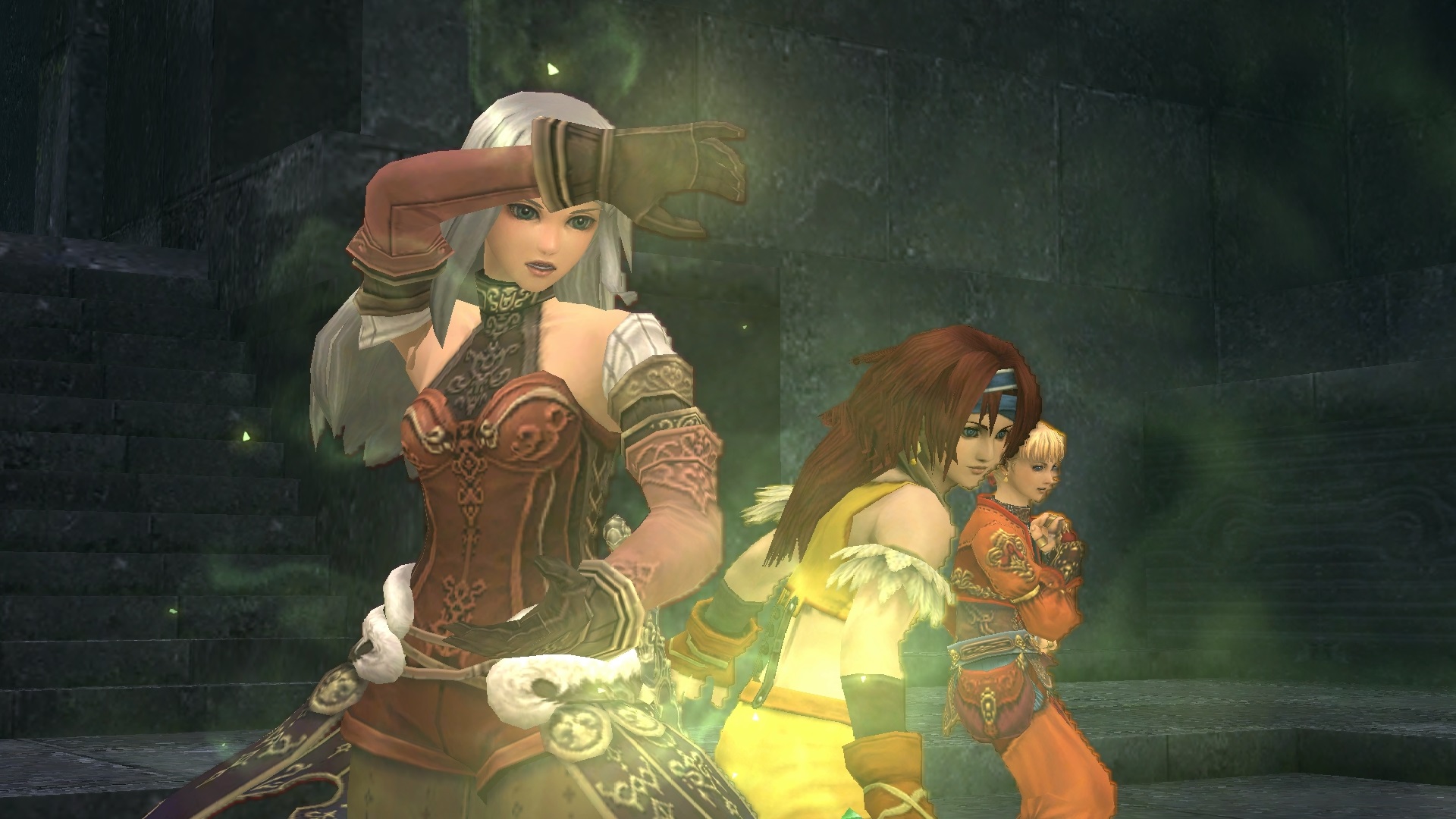 Final Fantasy XI made quite a few waves for being the first mainline title to hit an Xbox platform. Released on Xbox 360, PS2 and PC, one of the greatest mysteries is why XI never appeared on PS3. Was there ever a plan to bring it to Sony’s seventh-gen platform?

[YF] During that time, I wasn’t in a position in which I would have known about this matter, so I’m not sure why that decision was made. I would have to imagine it was very much a business-related decision.

[AM] I also wasn’t part of making that decision at all, so this is pure speculation, but I believe it was because they were planning to release FFXIV — which was to be the successor of FFXI — on the PS3.

Though it’s been four years since the service shut down on PS2 and Xbox 360, the game still maintains a healthy player base on PC. What gameplay and design elements do you think have kept players online all this time?

[YF] As an MMORPG, FFXI is a game that requires cooperation and playing with others more so than almost any other game. Simultaneous play with others might make any game fun, but in FFXI you fight against monsters over many days and weeks with party members, and players must support each other to succeed. Spending time with those comrades is very fun and valuable, and it also creates a strong connection between those people.

In FFXI, that connection between people — in other words, the bond — contributes to shaping Vana’diel. Personally, I feel that having this kind of environment that easily allows for these bonds to be formed is what has helped up maintain what we have.

[AM] First, I believe that the time players spent playing FFXI and the characters that they leveled up have become so precious that they can’t easily forget about them. Additionally, I believe that not all gamers are looking for games with battles that require you to have good reflexes and react in direct and intuitive ways. 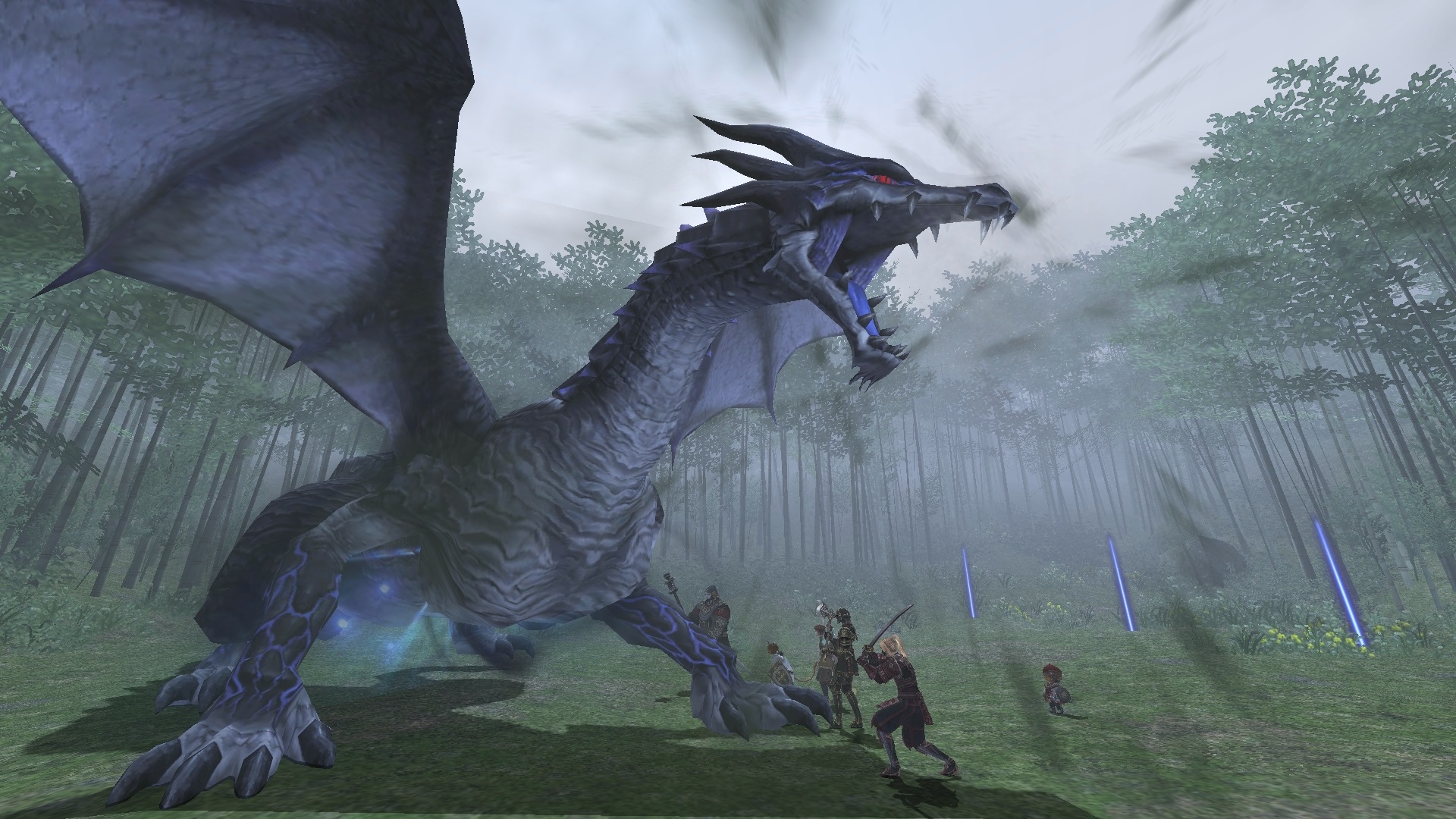 Throughout Final Fantasy XI’s life, the game has remained a subscription-based service. Will it ever go free-to-play or will you be retaining the current model for the foreseeable future?

[YF] At one point in time, we did research on free-to-play and considered the planning of actual operations if a switch was made. We tend to consider this kind of matter more so from a business perspective, but we also felt it would have been very likely that the community might also be hard hit if FFXI was to make such a massive change to the model.

Similar business model changes had a tendency of changing the game from “time-to-win” to “pay-to-win” from a gameplay perspective — you have to wonder how the players would feel if this transition actually occurred. Additionally, the player base has changed drastically over the years, so implementing that new model would probably not have worked without making any changes to the game itself. In the end, we aren’t considering making any particular changes to the business model at this point in time.

[AM] We actually did consider transitioning to a F2P model, but by that point, most of the in-game elements that we would have provided for purchase based on the F2P model were already being provided to the players for free. If we were to change the game’s operation to a F2P model without putting in a tremendous amount of effort in adjusting in-game content, we likely would have had to reset the game data and take away all of the players’ achievements to make a fair transition.

We concluded that we couldn’t do such a thing — the FFXI community is still very much alive, and we still feel the same way today. 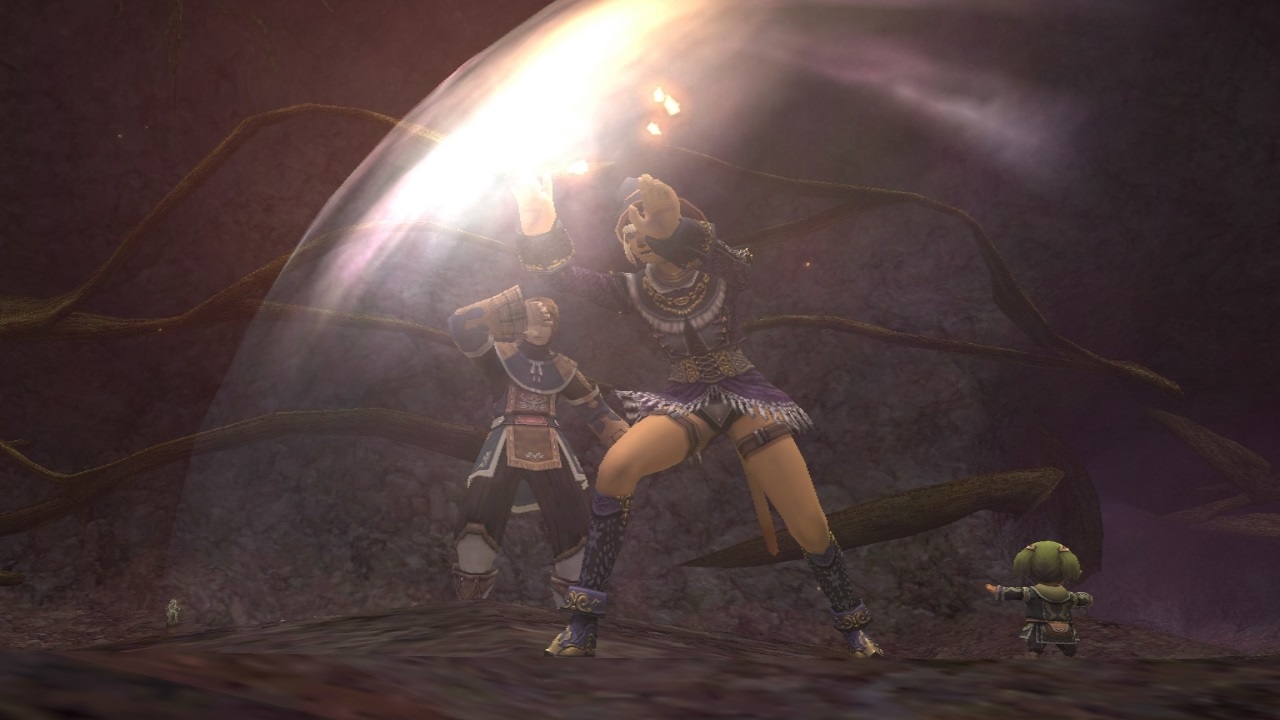 Do you think we could ever see Final Fantasy XI return outside of PC? Maybe a remaster, a remake or even a potential XI-2 for current or next-gen consoles and PC?

[AM] Currently we are focusing on using our resources and somewhat limited number of staff to reinforce and improve our current service. However, I don’t want to rule out a possibility if we have overwhelming support and requests from our players.

Now that its been 18 years, what, in your mind, has been a lasting legacy of XI on the Final Fantasy franchise and MMO genre?

[YF] In terms of depicting a narrative, I believe FFXI was the first MMO title that used cutscenes to tell a story.  Within the FF series, I believe the game presented the importance and effects of the bond created between people through an online network, as well as an everyday-life atmosphere.

[AM] I think it would be arrogant of me to mention any legacies — I’m not sure we’ve even left our own footprint on MMORPG history. That said, and this is within Japan, but I’ve started to hear stories of game creators working on other titles who used to play FFXI for many hours. If we are able to see even a glimpse of FFXI in the games that those people create, I don’t think it’s a stretch to call them FFXI-2, and that’s something I would be proud of. 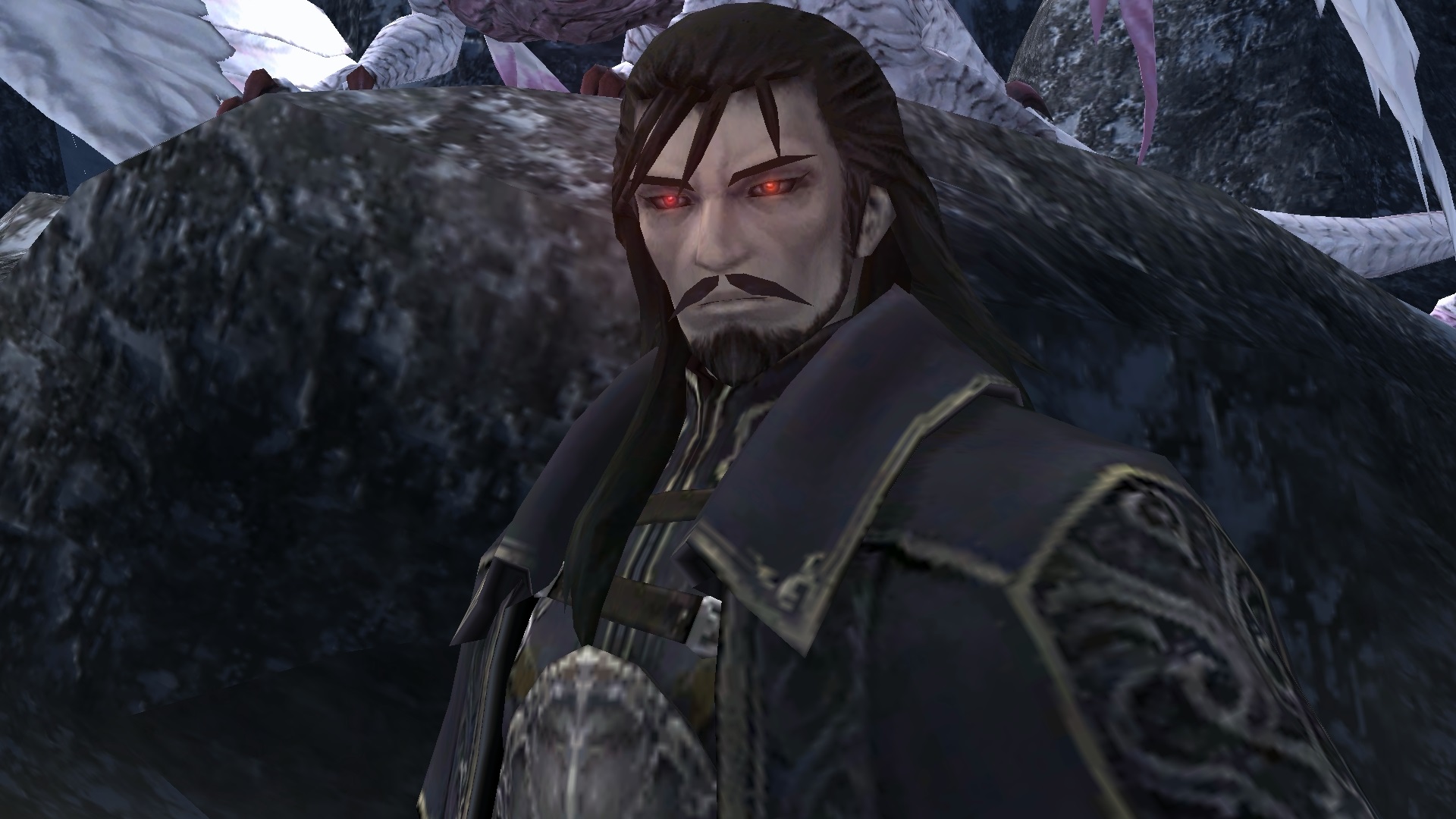 The Final Fantasy franchise has a rich history of referencing previous titles in the latest entries. What characters, settings, enemies, weapons or items from XI would you like to see pop up in future Final Fantasy projects?

[YF] Hmm… I would probably say Chocobo Chick and Chacharoon…

[AM] It would be great if Lilisette and Aphmau made appearances as the quintessential dancer and puppetmaster, respectively. I would also be happy if some of the gear that was famous in FFXI, such as Ridill, Kraken Club and Vermillion Cloak, made appearances as well (featuring appropriate specs, of course).

Final Fantasy XI is available now on PC. Service for the PS2 and Xbox 360 versions shutdown in 2016.