One game that has received a mixed reception over the last month is Call of Duty: Infinite Warfare. It’s no secret that the latest entry in the Call of Duty franchise hasn’t been sitting well with the community.

At E3 2016, we were able to sit down with Call of Duty: Infinite Warfare’s Studio Art Director, Brian Horton, to talk about what Infinite Warfare has to offer over its competitors.

[Hardcore Gamer] It’s been three years since Call of Duty: Ghosts, which did not get the best reception. How has Infinity Ward evolved going from Ghosts to Infinite Warfare. It isn’t a sequel, is it?

[Brian Horton] No it’s not. The team is proud of Call of Duty: Ghosts, but we did know we wanted to push things further. With three years of development we knew that innovation was really what we needed to focus on. There were a lot of different avenues we could have gone, but then we looked at the opportunities space could provide. It affords us a lot opportunities to look at mechanics and say ‘how can we push those forward.’ The Zero-g combat, jackal combat, and gear seemed like a great opportunity. 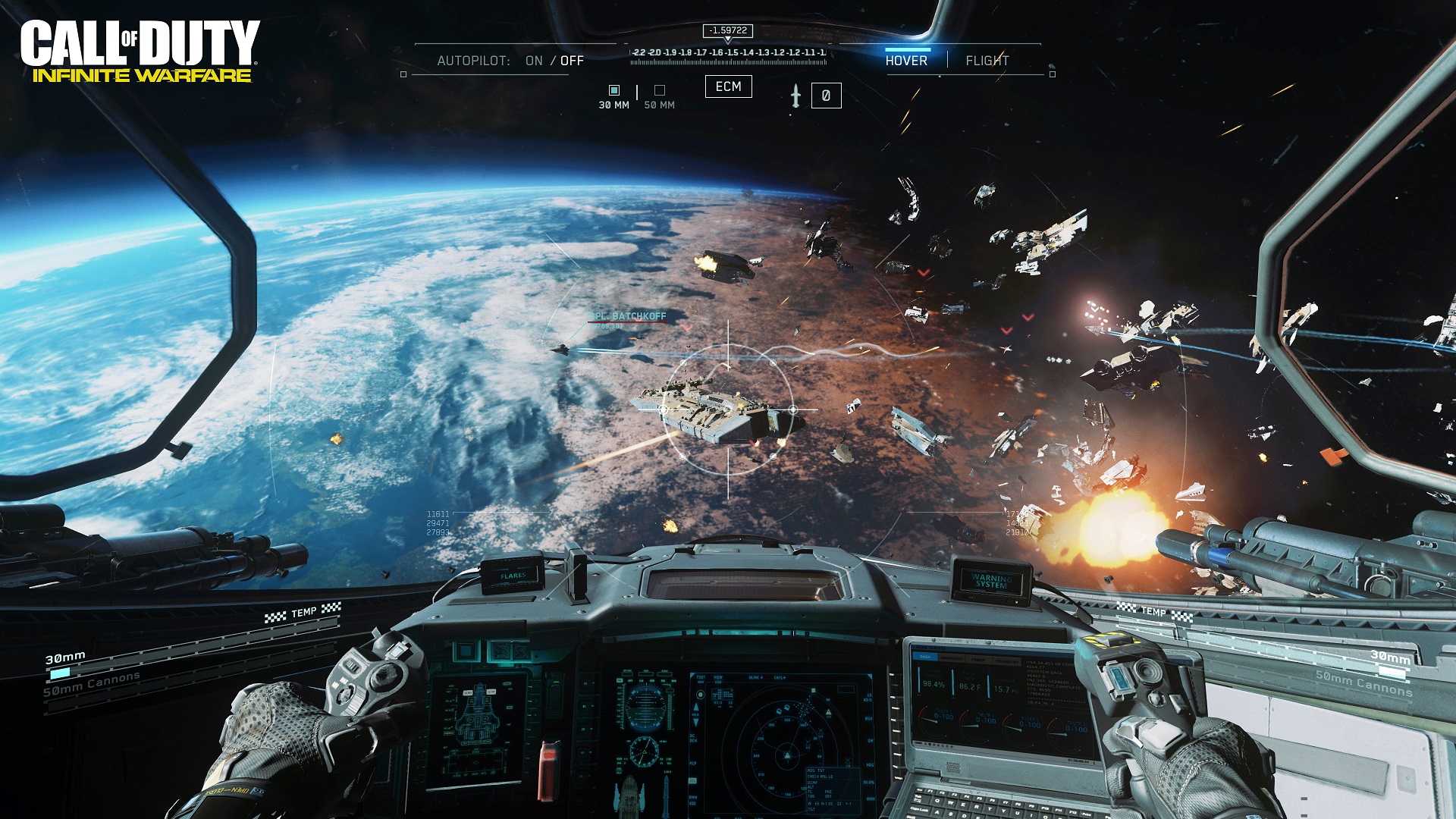 How far into the future are we talking about? Who are we fighting against and what their motivation is. Most importantly, how is Jon Snow (Kit Harington) as a villain?

The context of the story is that we’re in the not-to-distant future. We’re not giving a date yet. There’s a second age of the space race where Earth’s natural resources have been depleted, and we have to go out into our solar system to gather these resources. We see the privatization of space and a galactic economy grow out of the need for these resources.

The Settlement Defense Front (SDF) are a military organization, an insurgency group that came out of this expansion into space and they have a singular vision to completely control this galactic economy and to take out the UNSA forces. They will do this by any means necessary. Kit Harington is, obviously, a very high profile actor, an amazing talent, and is one of the main faces of the SDF.

We really wanted, in our innovations, to create choice in our own kind of way. One of things that is unique to Infinite Warfare is that you are a captain. You’re promoted from lieutenant to captain and are in charge of the Retribution. In that power of responsibility comes a burden, and there are life and death decisions you’ll have to make.

As a player, one of the things we showcased at the Sony conference is the control console where you’ll see the solar system. There are points of opportunity that players can go to throughout the campaign. You’re going to get into your Jackal, fly to that opportunity, and you get to take these SDF controlled objectives out. We’ve also designed our missions to have a wide, linear path where it’s not just one path, but multiple strategies you can have depending on your play style. 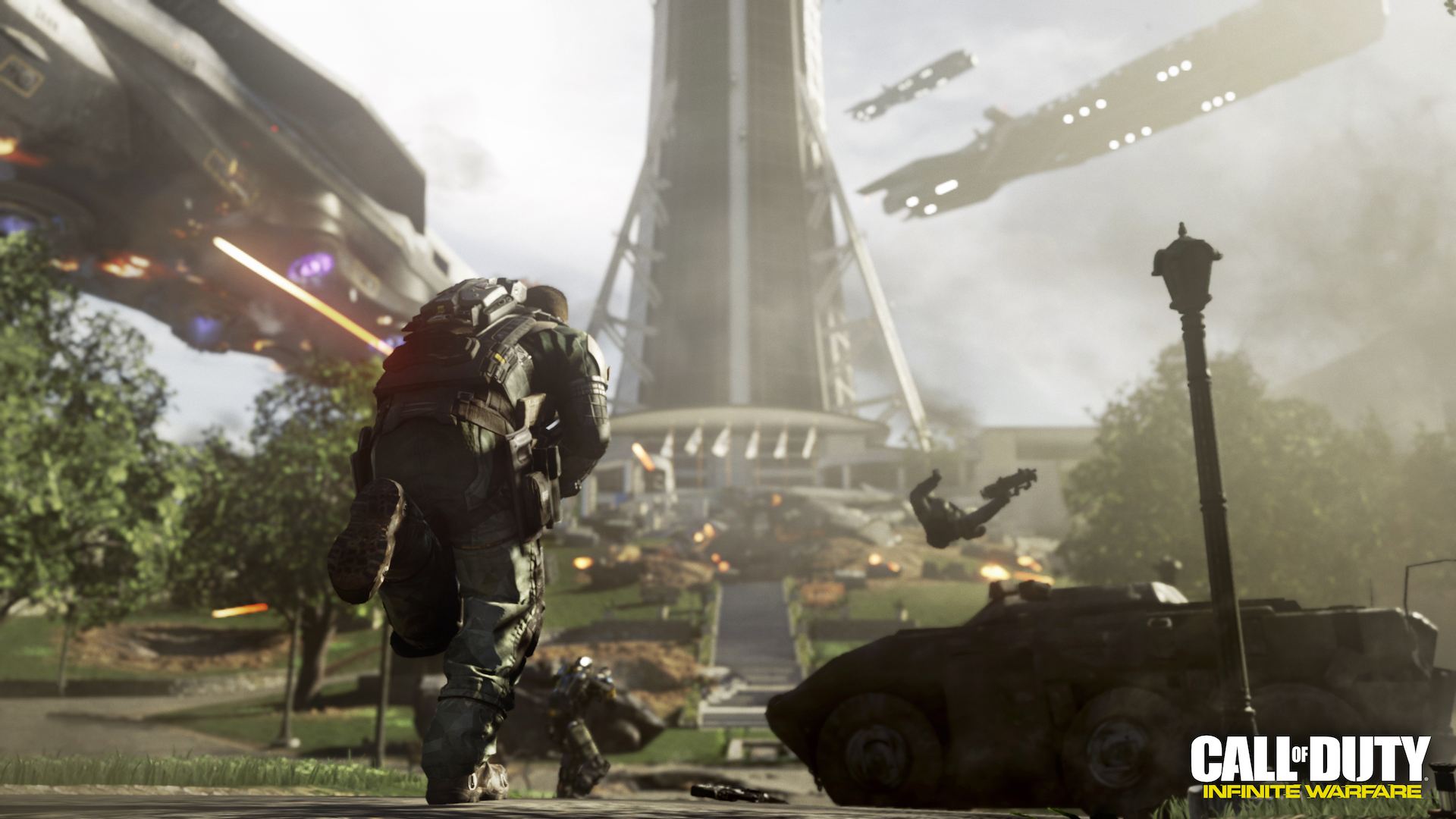 Sounds like this could be the longest Call of Duty campaign ever. Would you say that’s a fair statement?

I’d say it’s one of the richest. It’s still a linear story, but you can punctuate it with these side-missions. However, it’s in parity with some of the more classic Call of Duty campaigns.

In the demo the level design didn’t really allow for any thrusters or wall-running. Will Infinite Warfare be a boots-on-the-ground game?

It’s definitely a mix-and-match. As you saw in Zero-G combat, there is a thruster. However, the focus of the Geneva level is a more boots-on-the-ground experience. As we progress further in the game, the gear will upgrade and that will become more of an important part of the movement stuff.

Speaking of that Geneva level, there was a desperate push up a hill that kind of reminded me of the D-Day section from past Call of Duty games. Was this callback to World War II intentional?

I would say that Infinite Warfare is a ‘classically-told’ war story that just happens to be set in space. Even though the context is space and has a futuristic quality to it, some of those themes you have in war stories are there. Charging a hill is absolutely deliberate to try and bring back that feeling of being part of a force and really trying to survive. So yes, it was absolutely a nod back to our roots.

So in space you have zero-g and your ship, the Jackal. All of that flying is freeform, right? None of it is on-rails? 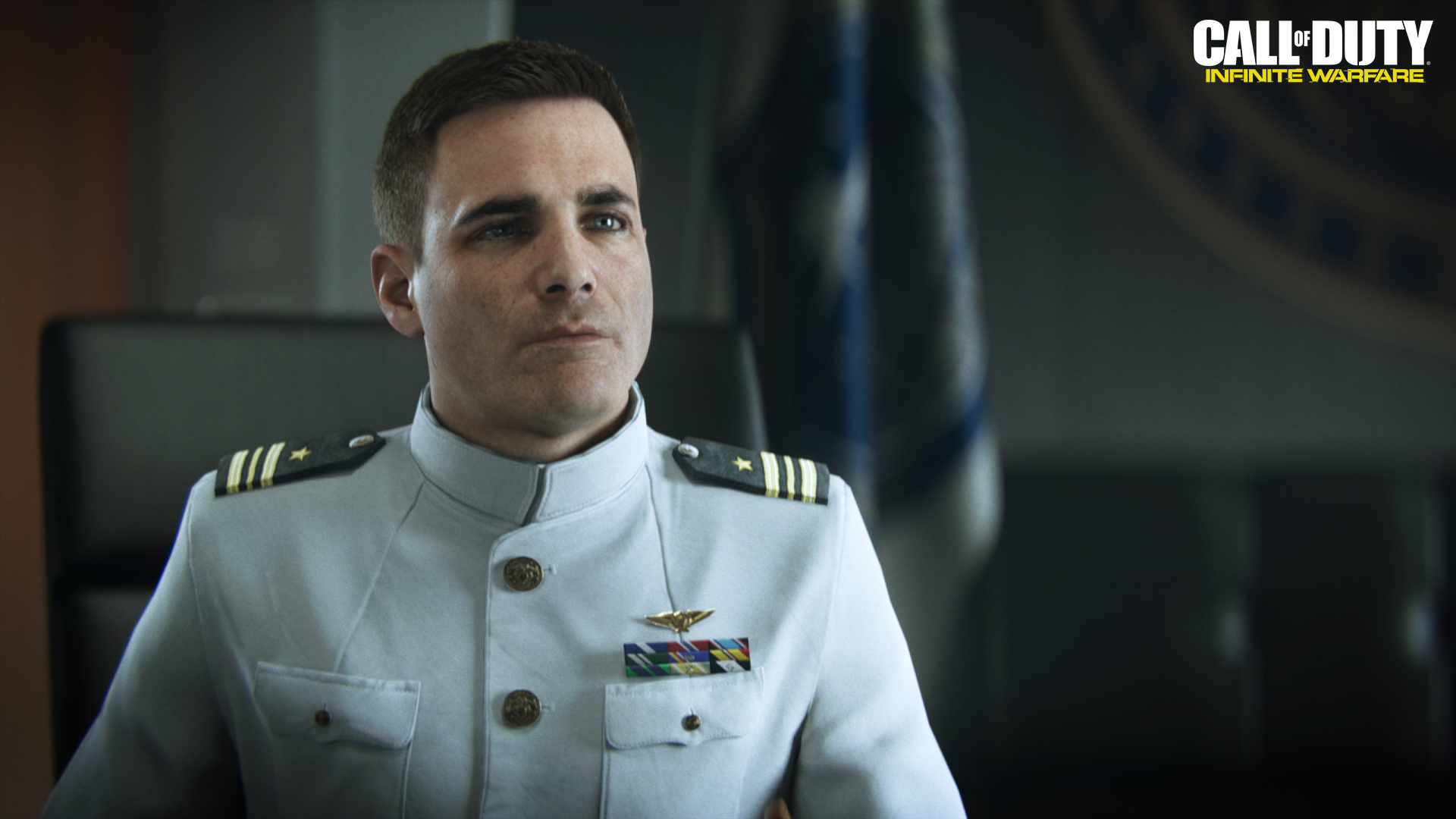 Can you exit your ship at any time in space and participate in zero-g combat, or can you only do that in specific areas?

In our side-missions that’s really the only opportunity you can go from the Jackal to zero-g. That’s the bubble we’ve created for that. However, there are a couple of opportunities throughout the game where you’ll be able to do that. Sadly, you can’t do it at any time.

Can you comment on the engine? Is this the same engine we’ve seen in the past, or is Call of Duty finally on a new engine?

Some of the foundations are there from our old technology, but we’ve completely rewritten so many systems, including our graphics engine. We have volumetric lighting, temporal anti-aliasing, brand new animations system, new AI, and new physics. There are a lot of systems that take advantage of these current-gen consoles. We’ve completely invested in those three years on ways to capitalize on them.

Is this the end of last-gen support?

Our focus is on the PS4, Xbox One and PC.

Switching over to Call of Duty: Modern Warfare Remastered, this is a big deal. This was the Call of Duty that really changed the industry. It’s the one everyone’s been clamoring for to be remastered. What was it like bringing Modern Warfare back?

It is absolutely a modern classic. I think everyone can agree that some of their most fun memories in recent years has been in Call of Duty 4. That game, to me, as a fan, was the one that really introduced what cinematic, first-person action was all about. The characters were memorable, and the situations were exhilarating. To bring that to current-gen technology has been a tremendous experience to witness, and I think the fans are going to absolutely love it. There might be some who have never played it before, and so being able to play it in this fashion is going to be really exciting. 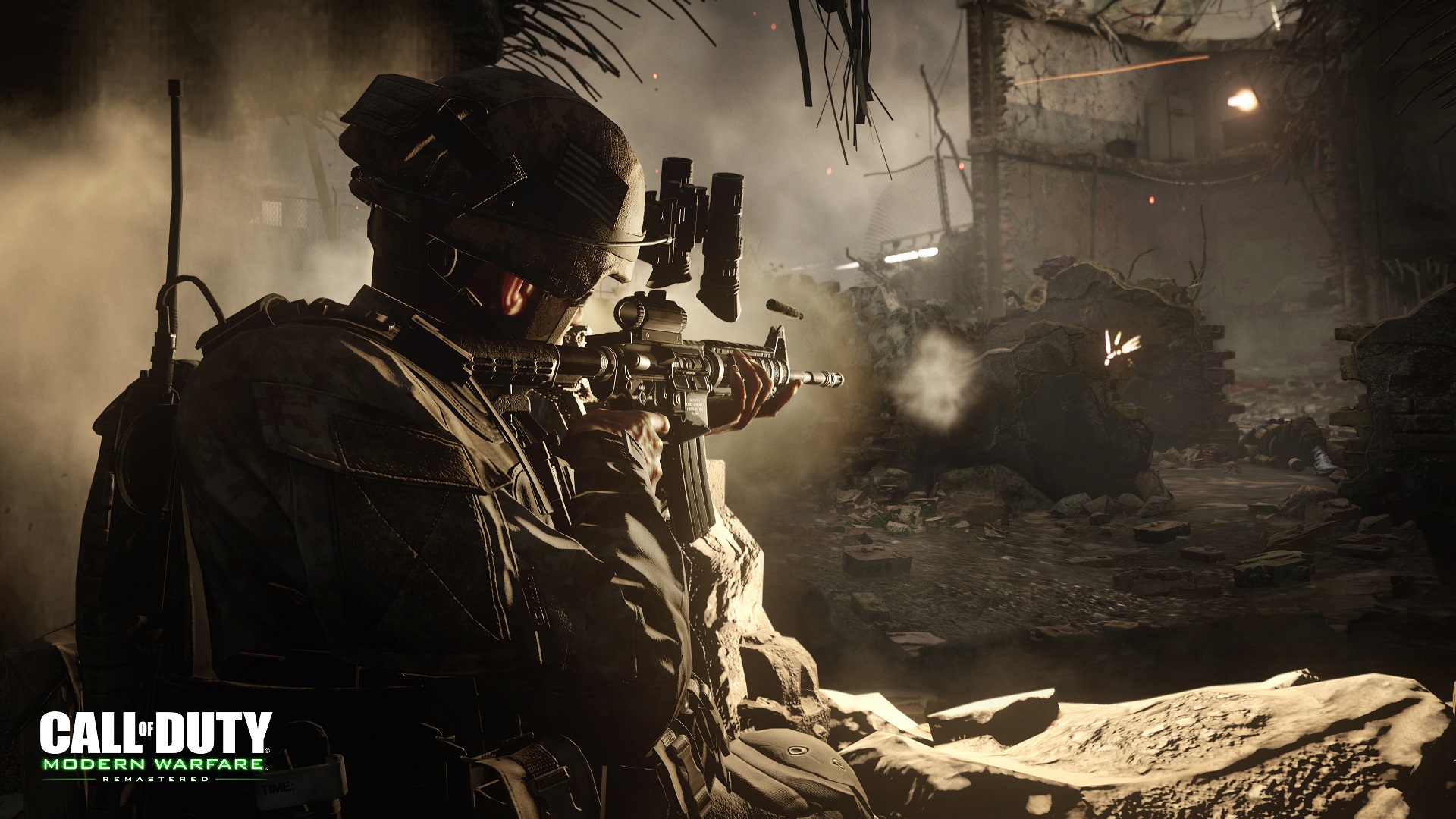 It doesn’t look like just a simple remaster. What all has been added and changed to make it look so good?

Anything you’d like to mention about the multiplayer? Maybe want to announce a new map?

Nope. We do have ten of the classic maps, and they are the favorites that fans have loved. So not only will you get the fantastic single player experience, but you’ll also get to know how fantastic it is to play multiplayer on these ten fan-favorite maps.

Finally, back to Infinite Warfare, let’s talk about the elephant in the room. There’s been a lot of negativity towards the game since it’s a reveal. We’ve seen a real pushback against the futuristic setting with players want to go back to World War II, or even modern times. Do you see Call of Duty ever going back?

At this point, our focus is on creating the best experience we can. That has been our passion, our mission to bring something really brand new to the Call of Duty universe. We believe that as we show more and more of the game and how the gameplay works that the level excitement will start to rise. I’ve been seeing it all throughout E3, this swell of “oh, that’s what Infinite Warfare is all about.” So we’re getting a lot of support where once there were a lot of questions. I’d say at this point that our main focus is delivering the best possible game we can, and then we’ll see what happens in the future. 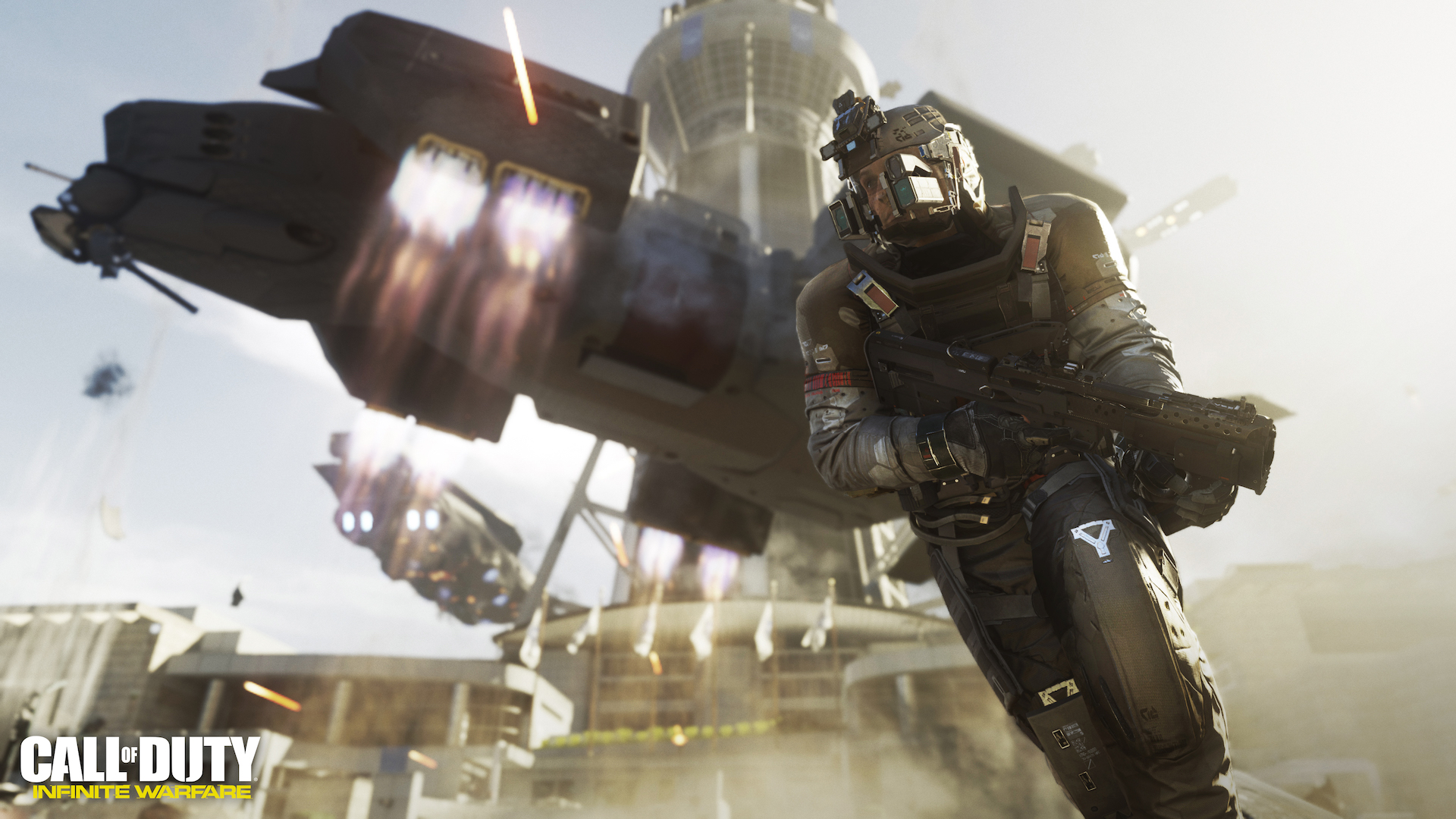 When will we get to see some multiplayer and Zombies?

We’re going to reveal both and Modern Warfare Remastered’s multiplayer at Call of Duty XP in September.

Call of Duty: Infinite Warfare is out November 4 on PS4, Xbox One and PC. Call of Duty: Modern Warfare Remastered launches the same day on PS4 and Xbox One for anyone who purchases the Legacy Edition, Digital Hardened Edition or Legacy Pro Edition.