Even though we knew about Titanfall 2’s existence for quite some time now, it was only at the event today we were able to not only get some hands on time with the game, but talk with the developers to learn more about their upcoming sequel.

We sat down with Lead Engineer on Titanfall 2, John Shiring, to talk about what Titanfall 2 has to offer in this highly competitive first-person shooter space.

Hardcore Gamer: The obvious first question: what has changed in Titanfall 2 over its predecessor?

John Shiring: There has been a lot of changes. So, obviously now the game is coming to PS4 and we now have single-player, offline campaign, and those have been a huge push inside the company. But in terms of multiplayer, we have tons of changes, too.

We have six all new Titans. You’ve seen Scorch and Ion, which are the two we’ve shown off so far. There’s pilot customization, Titan customization, new weapons, the new mode “Bounty Hunt,” and we have new game modes coming. There’s a lot of little changes and tweaks in the game; obviously grapple hook and slide are new mechanics, but there are all sorts of changes everywhere. We held nothing sacred and just tried to create the most balanced game we could make.

Can you break down the story? Is this is a continuation plot from Titanfall, or is this something new?

It’s a new story. The setup is that you’re a Rifleman, Jack Cooper, who dreams of being a pilot someday, and through a set of circumstances, you meet up with BT, the Titan, and so you become a pilot behind enemy lines. The single player game is really different from any other single player campaign you’ve play. We felt there was a formula set in on single player, first person shooters, and we wanted to try create something new and different, and we have.

We’re not reveal everything about it; we’re trying to keep some surprises so that when people play the game this October, there will be things in there they didn’t expect to find. It’s different from anything we’ve made in the past and it’s a different feel for multiplayer. You have moments of exploration, quiet times, and big open areas for you to decide how you want to attack. We really wanted to embrace the mobility that came with Titanfall. It’s a game about challenging the player to figure out how to get to places and fun ways to do combat combined with that mobility, and its storyline with BT; it’s an interesting thing we’ve made. 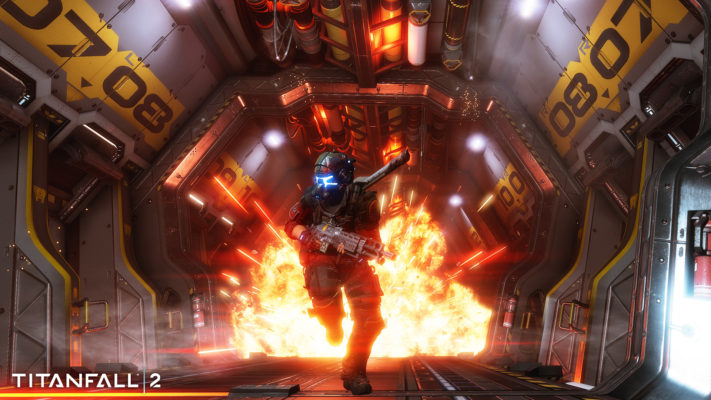 The first game a lot of the maps were industrial, city-based. Are there going to be different settings in Titanfall 2?

Yeah, in our multiplayer trailer that aired at the EA Press Conference, the map that you played was Boom Town, but we also showed in that trailer another map called Homestead. That map was big outdoors, with lots of foliage and grass, so you can see from just those two maps so far there’s a lot of variety. That’s definitely something we strive for, having lots of different locations for players to go play in multiplayer, and single player is its own thing, as well.

The original Titanfall ran on the Source Engine. Is Titanfall 2 running on the same engine or has it been moved to something like Frostbite?

On Titanfall we started with the Source engine; we replaced the renderer, we replaced the audio system, we replaced the net code. What we have now is very different from that. We have stuck with the Titanfall engine, but we did a lot of rendering improvements. We have physically based rendering, we have this really cool texture streaming system we wrote, HDR, bloom, depth of field. Hopefully you can see the results of all that hard work we put in that the game looks really different.

We also have a whole new audio system again. This time we have audio environments. Audio-wise, if you compare the two games again, it’s a huge leap. We have sound occlusion and reverb happening. There has been a whole bunch of areas where we make big changes to the engine, so there’s not a lot of Source left; we continue to rip out chunks and rewrite chunks and make it do exactly what we want to get out of this engine, and get the performance what we’re looking for.

One of the big criticisms of the original Titanfall was content. Very few guns, only three Titans, no campaign mode, only a few multiplayer modes. How have you addressed the content issues from the first game?

One of our big things this time is we really wanted to have a deep game that would give you things to do for a long time. We have a whole new progression system that we’re not going into just yet, but I can say that we’re really lucky to get Todd Alderman back on our team. He has been with Respawn for about a year now. Todd was the one who created the progression system in Call of Duty 4. He was someone we worked with in the past, and he came in and created a whole new progression system that’s different from other games and different from what we’ve done in the past. We’re very confident will have a lot of depth and a lot of breadth, a lot of interesting things for players to do, and a lot of paths for progression. 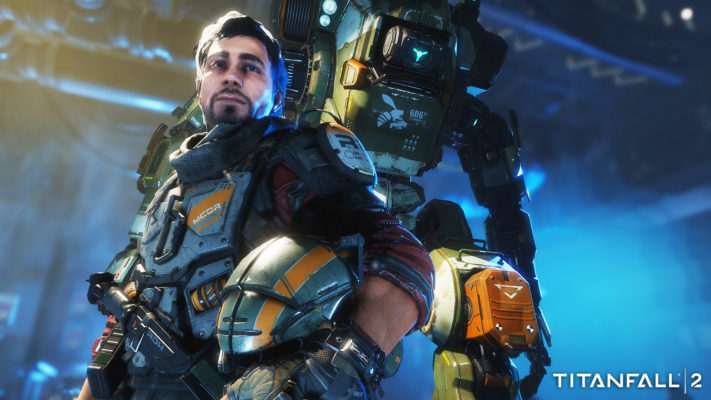 You saw in our multiplayer trailer some Titans with camo patterns on them. We’re going to have war paint, other art, and bunch of different ways to customize your Titan along with your pilot. We’re not going into more detail quite yet, but that’s something we’ll be showing as we get closer to the launch in October.

Will there be micro-transactions?

We’re not talking about what we might do for that, but there’s going to be no pay-to-win. Anything that is gameplay affecting will be free. All of the maps, all of the modes we add to the game will be free, patched in for everyone. We don’t want to split up our player base like we did last time, and we want to make sure we have a big population of people to matchmake and have no problems with someone winning because they paid more money.

Do some of these game modes exclude the AI? Are some just PVP with no AI?

We have some modes with AI, some modes without AI. You played Bounty Hunt, which had a lot of AI in it, and that was one of the reasons we brought it here to EA Play was because for people who come through to play one match, it’s a target rich environment. There’s a lot of things to shoot at. You can figure out the gameplay and the guns. We have other modes with no AI; we have modes with more players; we’ll be showing more of the new modes later on, but we’ll have a lot of variety there. 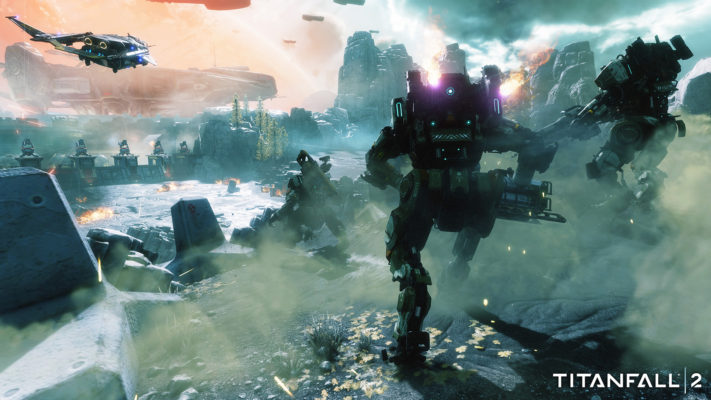 Obviously, this game is finally coming to PlayStation. Has it been easy transitioning to the platform?

It’s always hard work to get the game running well on a new platform so engineers have spent a lot of effort on that, but it’s something we like to do. It has been fun and we’re really happy how it’s running. It’s running really really well, and we feel really good about how it’s performing on every platform now. Whatever platform you like, the game will be great on it.

Titanfall 2 will be available October 28 for PlayStation 4, Xbox One and PC.