One of the more surprising announcements this year was that not only was Shelly “Bombshell” Harrison getting a second game but it’s being created in the Build Engine that powered so many of 3D Realms’ greatest hits in the 90s.  Ion Maiden is more than a throwback to an earlier type of game, but rather a complete recreation of a specific style of FPS that’s also got a few nice upgrades under its hood.  The game plays out like the sequel Duke Nukem 3D never got (just to clarify that point- there was no sequel to Duke Nukem 3D and nobody can prove otherwise), filled with interactive background items there simply for the fun of being interactive, more secrets than you can shake a stick at, and lots of baddies to shoot.  The build on the PAX East show floor was mostly the same one currently available on Steam, except with a bonus mode called Queen of the Hill where you fight off waves of attackers, and it feels just about perfect.  The guns could use a bit more punch and the enemy design is a little basic, but there are enough good touches that I have faith these will be addressed in development.  A game that’s polite enough to let you know how many secrets are left in an area before you leave seems like one that will address any other issues that pop up.

While at the 3D Realms booth to check out Ion Maiden I also got an opportunity to talk to the company’s vice president, Frederik Schreiber, about the origin of the game, the decision to use the Build Engine, and the advantages of going back in time with older tech.  There were some good details on how this came about, so here’s the entire conversation minus a phrase or two that got lost in the background noise-

[Hardcore Gamer] Duke Nukem and Ion Maiden both using the build engine-  How did that come about?

[Frederik Schreiber]  Three years ago we kind of decided to find out what is the soul of 3D Realms; what made us successful in the first place.  That was Duke Nukem 3D, Shadow Warrior, the classic first person shooters.

Exactly, so did we, so wanted to kind of go back to that and then instead of going back and making a game that felt like that we decided just to make a game that was that.  Go back and use the original engine and basically make something as… ok, let’s imagine that we didn’t do Max Payne and Prey and all those other games after Shadow Warrior.  Why don’t we just make the next Build Engine game?  And out of it came Ion Maiden.  We got in touch with a great team called VoidPoint who are kind of experts in the old Duke 3D engine, they’ve been doing a lot of community maps and mods and source ports.  They were the biggest experts you could probably find.  We partnered up with them and asked them if they wanted to be on board and Ion Maiden is the result. 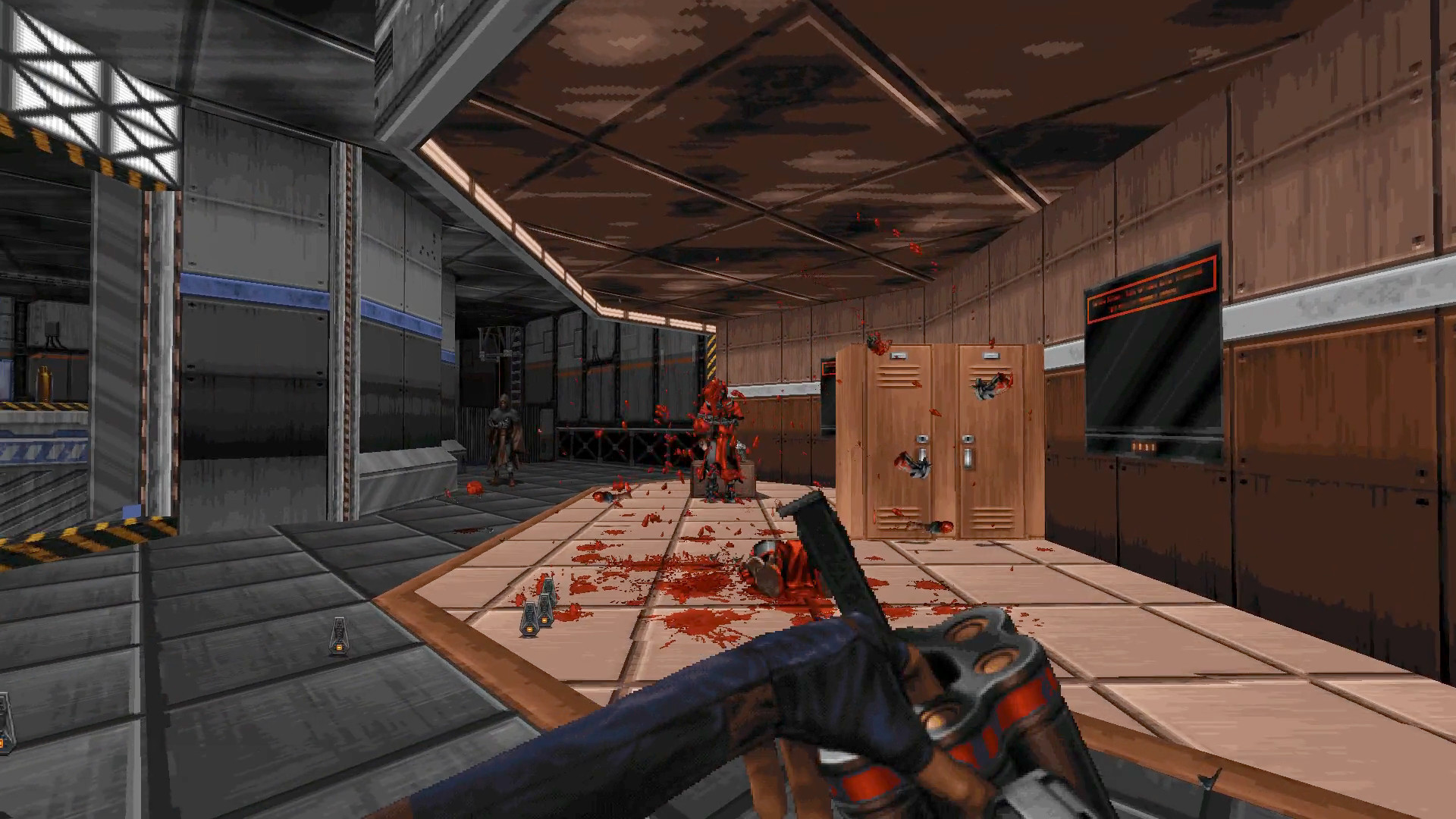 OK, now are they doing level design on this?  How are they helping out?

So they’re doing programming, level design and so on, and then some of our guys are helping out as well with the artwork, so it’s like a collaborative effort.

Now the character- the first game that came out, Bombshell, had its issues.  Now she’s back and it looks like she cleaned up quite nicely.  How did that come about?

Well, so the original Bombshell game had a lot of issues on launch.  It was a very, very ambitious game; probably a bit too ambitious for the kind of budget we had.  Post-launch after the game came out we did a lot of work to fix it up.  We didn’t want to give up on Bombshell.  We know we had a really good game in there; a really cool character.  So we thought about “what do we want to do with a new first person shooter”?  We thought “Hey, let’s do Bombshell, let’s go back and make a prequel.”  Almost as if Ion Maiden was originally an old Build game and then the Bombshell game came after it, the modern thing. 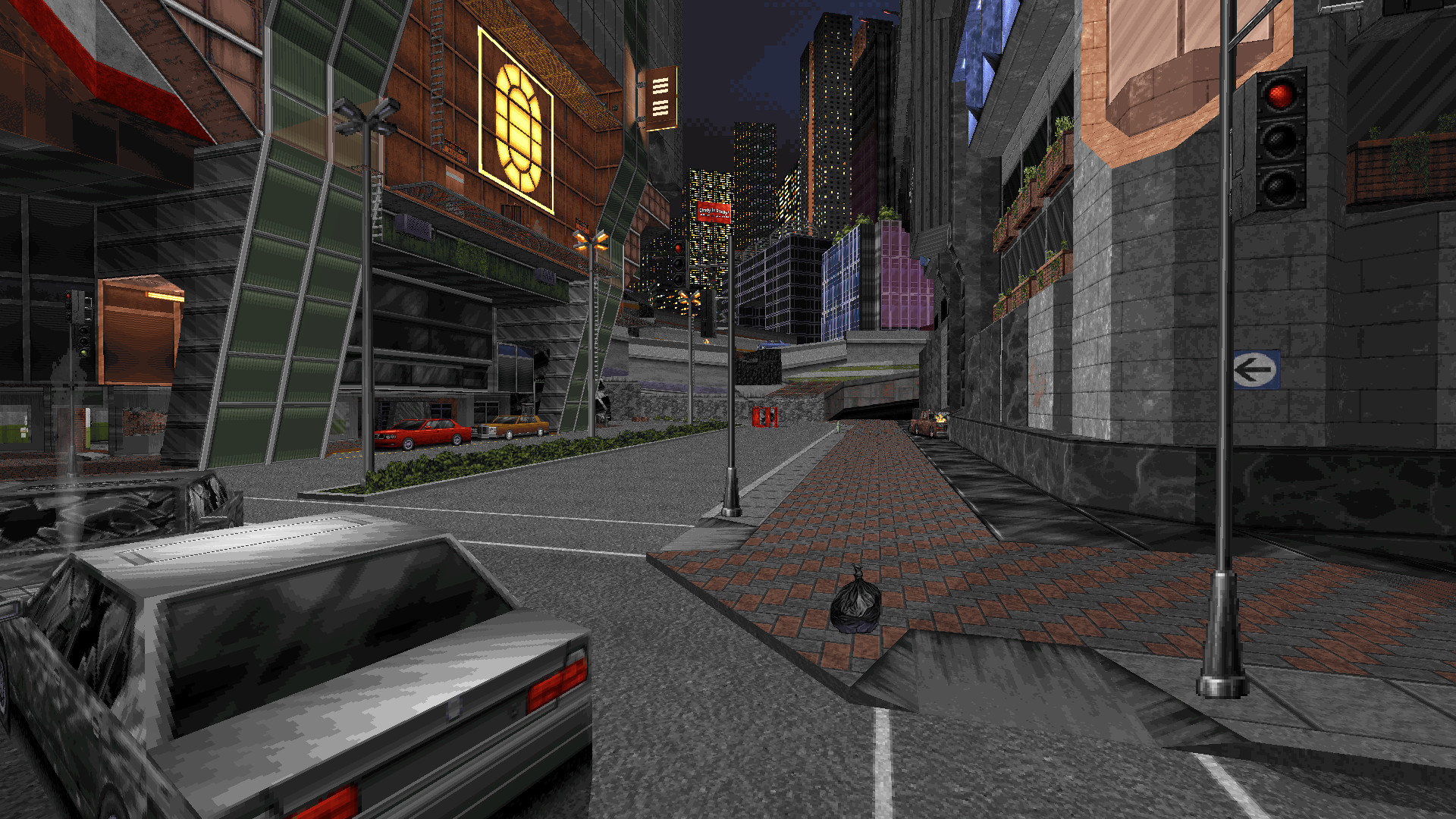 One thing I was noticing is that the feel on that is just right.  It feels as though it has the level structure and level design that I feel a lot of less retro type of game doesn’t seem to get.  Do you think that has to do with the fact that you’re using the Build Engine?

I don’t think it has anything to do with the engine; I think the philosophy itself, of making the game feel like the 90s, was to pick out things that we thought were great, and one of those was the level design.  There’s two different level design philosophies.  Most modern shooters are using very linear level design, mostly because it’s very expensive to script an event.  You want to make sure that the player sees all the expensive stuff they made, while back in the day it was more about exploration.  Games like Doom and Duke Nukem 3D and Shadow Warrior always had an entrance and an exit, but in between that you had multiple paths that led into the same room then out to different rooms again.  There was a lot of verticality and so on.  We learned to take that same approach to level design so the levels feel more vast, there’s more exploration to be had, and then there’s a ton of secrets.

You probably were!  In terms of the secrets, it’s partly borrowed from something like Super Mario Odyssey.  You know secrets in games like Wolfenstein 3D were hard to find because you had to walk and press Space on every wall to figure out which wall moves.  This approach is more like you seen an object you want to get but you don’t know how to get it.  So you’re constantly teased, “Oh, there’s something there or there’s something here, or there’s a grate that’s closed here.  There’s a closed door with a window and I can see what’s behind.”  So we constantly tease what you can get, but how to get it is something you have to figure out. 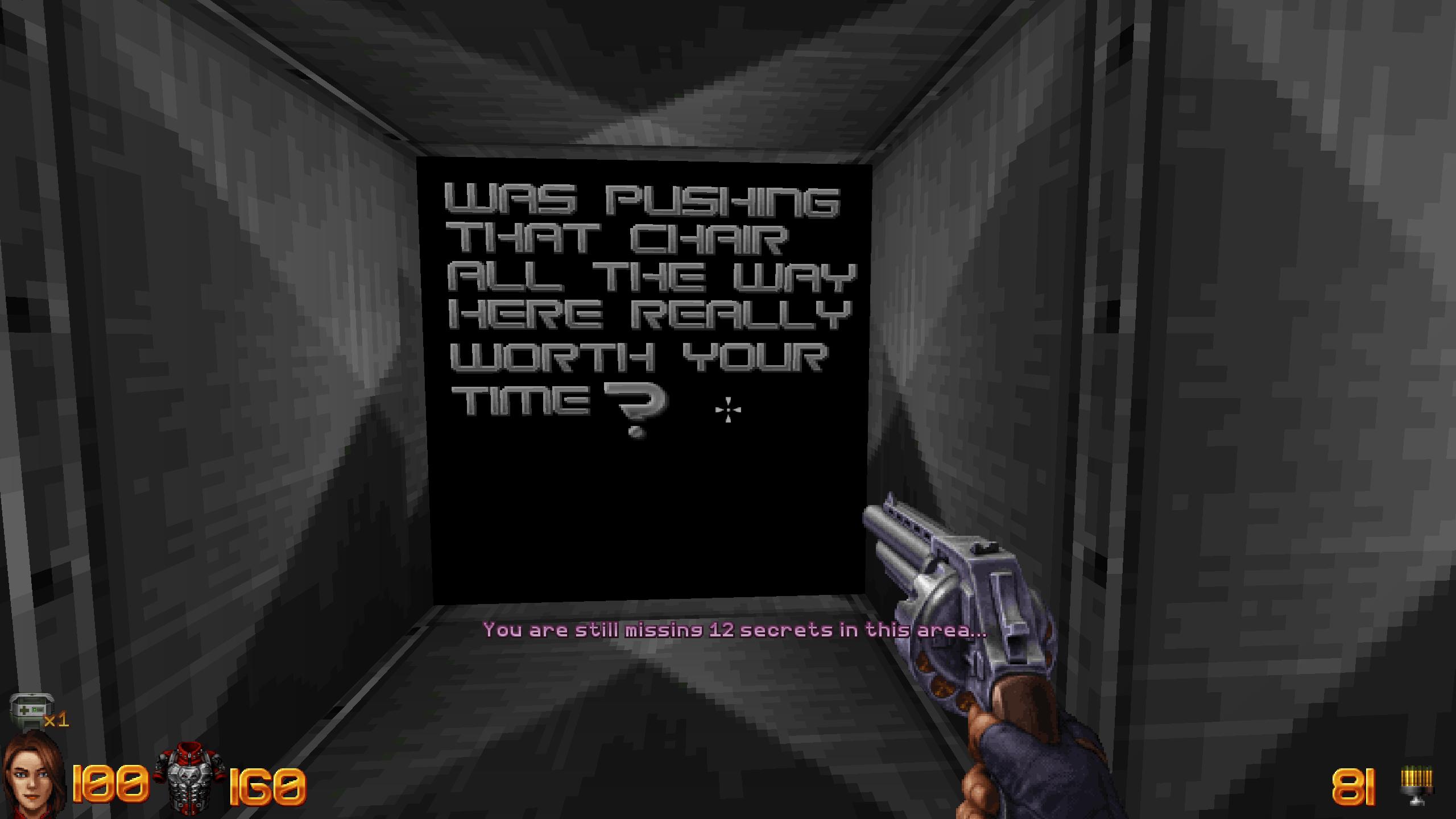 Some secrets are less useful than others.

Do you feel that the fact that you’re using an old engine… You say modern cinematic shooters, because they’ve got big explosions and big set pieces that are expensive to produce, d0 you feel that with the Build Engine because maybe the set pieces aren’t quite so intensive, you can have more without actually forcing the player to focus on it?

Yeah, and also since we’re using something like the Build Engine, making a building explode was relatively more simple back in the day.  In Duke 3D, for instance, you have the building just go into the ground while you play explosion effects.  That’s cool because that’s the limitations of the engine.  While nowadays it requires a fifty man team and a million dollars to create the same scene, because that’s the most real.  So yeah, that gave us more resources to make more of those.

Yeah, because I was noticing I hit a button and hear an explosion; I come out and an entire section of the wall is gone, there’s fire everywhere.  I know the engine can do it, I know you can show it, but you didn’t need to.

You didn’t need to go there either.  That was entirely optional.  That’s one of the things that makes the world feel more expansive and more interactive as well.  You can go wherever you want, you can interact with everything, and there’s multiple paths to the same section.  There’s like key spots in each level that you need to go to.  There’s this door that’s locked, like a key door; there’s a key card here.  You’ll get to those areas regardless because it’s the main progression of the level, but how you get to them can be entirely up to you.  You can find a grating to go through, you can ambush enemies, you can take the main path, you can take the elevator or jump down.

How important is the story in this one?

I’m not going to argue that viewpoint.

But that was the 90s viewpoint.  It fit for a game like this, where the main thing is about great level design, amazing weapons, and tons of gore.  That’s what a game like this is about.  The story itself is you have an evil bad guy, Jadus Heskel, he’s made cyborgs out of soldiers and released gone against the Global Defense Force in Neo D.C., and you have to take him down.

That makes sense.  Now the Build Engine, that’s obviously a modified, enhanced version.  How much modification and enhancement, how far into modern day has the Build Engine been dragged?

There’s a lot of technical modifications to the engine itself, first of all to make sure it runs on modern systems.  We’ve removed a lot of the limits on the engine to allow for bigger levels and so on, but there’s also gameplay modifications.  Basic things that you expect nowadays that weren’t back in the 90s.  Checkpoints and auto-saves, you’ve seen the mouselook to move around.  Those basic things, like having basic physics as well, being able to push stuff around in the world and jump on it.  These things were not back in Duke 3D, because people didn’t build them.  The first person genre was still so new.  Duke 3D was three years after Doom…  So obviously we wanted those things in this game so it doesn’t feel limited by the engine.  The engine itself and the look, the style of the game, should not be limited.  It should enhance it.  So every time when the game was designed, like we found an obstacle, we really wanted to do this but we can’t, we improved and enhanced that in the engine. 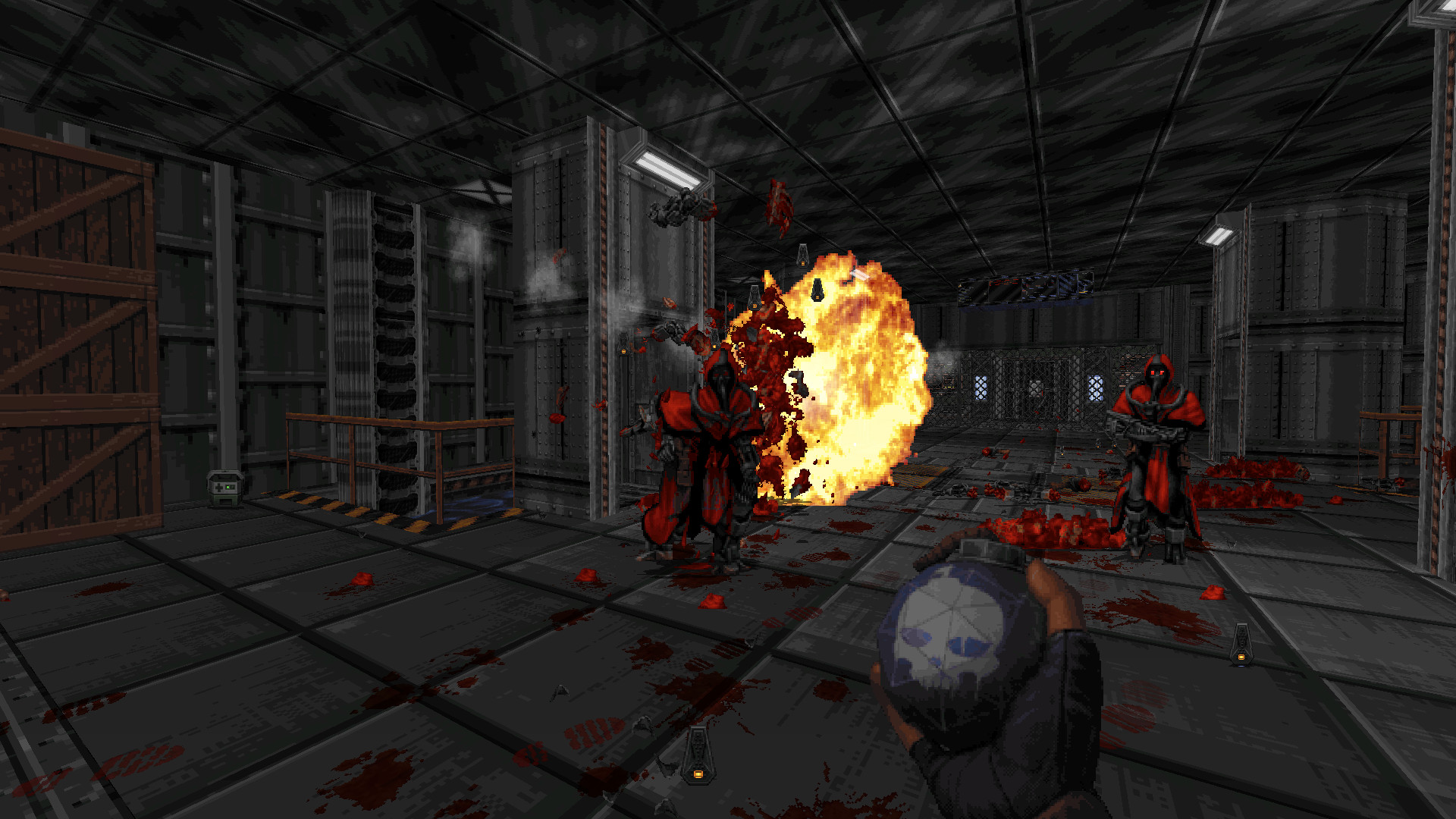 There’s a bit of a difference here.  One thing is making a game that looks and feels like a retro game, a pixel art game made in Unity for instance, and another thing is making it on the real hardware in the real engine so it becomes authentic.  For us authenticity was very important and part of the reason that we think this game is so good.  You can make good games in other engines but being authentic, especially coming from 3D Realms, it wouldn’t have worked if we’d done it in Unity.  It wouldn’t feel right.  Another thing is people liking these type of games is something we didn’t realize until now.   There’s been a renaissance of these retro-type games like the Super Nintendo, the 8-bit pixel art games and so on, and very few actually become successful but there’s a ton of them.  Mainly because they’re fast to make, but there’s very few in between that are actually really beautiful, like really good and really innovative.  And what makes those games so unique is not the art style; it’s the fact that they are great games first and foremost.  That they are then pixel art and so on, that’s secondary.  That’s just icing on the cake.  We wanted to take the same approach here; the fact that it looks the way it does and it’s made in that engine should be secondary to the fact that it’s a great game first of all.

And that seemed to cover all the bases for the moment so we called it good.  Ion Maiden is currently in Early Access on Steam, and while the current build is two levels plus a boss fight it’s a great indicator of the carnage yet to come.