Originally released in 2003, EVE Online has proven to be one of the more enduring MMOs, with its number of active subscribers steadily climbing each year as the game continues to improve and evolve with expansions and updates. One year ago the virtual reality device known as the Oculus Rift launched with an EVE Online spin off, EVE: Valkyrie, though the game later became available on the HTC Vive and PlayStation VR, complete with cross platform play. EVE: Valkyrie allows players to experience the universe of EVE Online in single player and PvP sessions in a greater level of immersion that only VR can provide. By incorporating the established universe of EVE Online into a virtual reality launch, CCP Games has shown the world that they intend to continue their innovative ways and remain on the cutting edge of gaming as VR becomes a more mainstream gaming platform.

When EVE: Valkyrie launched, VR games were still trying to find their stride. Having sampled virtually every VR title that was available at events like PAX, most of the games felt like glorified tech demos compared to some of the non VR games that were also in development at the time. That’s not to say the games weren’t fun, they just caused more excitement about what we could see in VR gaming further down the road then what was in front of us. These games showed us the potential VR had to be an amazing gaming experience, but only delivered the wow factor in a few aspects.

EVE: Valkyrie was among the more impressive titles to debut with the Oculus Rift. Valkyrie was built from the ground up for VR, and does have respectable Metacritic scores (71/100 PlayStation 4, 69/100 PC). Most of the criticisms do not stem from the game play being bad, in fact EVE: Valkyrie received praise for its visceral dog fighting action and satisfying game play. The best analogy for me is the VR immersion creates a gaming experience that is like how I always wanted After Burner to play when I was a kid, except better because EVE: Valkyrie is about dogfights with spaceships. Also on the topic of childhood nostalgia, even though EVE exists in its own universe, the battles in EVE: Valkyrie do conjure up memories of how cool I thought the space battles in Star Wars looked the first time I saw those films.

The criticisms stem from the actual content not being as fleshed, creating an enjoyable but short experience, and with VR still being a niche market, there was a small pool of online players to fight compared to some other established franchises. Player vs player combat was the main attraction, and the limited single player experience was noted in several reviews as a low point. While these criticisms may be valid points, EVE: Valkyrie still has the distinction of being one of if not the best title that was available at the launch of the Oculus Rift, and even these criticisms suggest that what we have with EVE: Valkyrie is something good, they just wanted more. 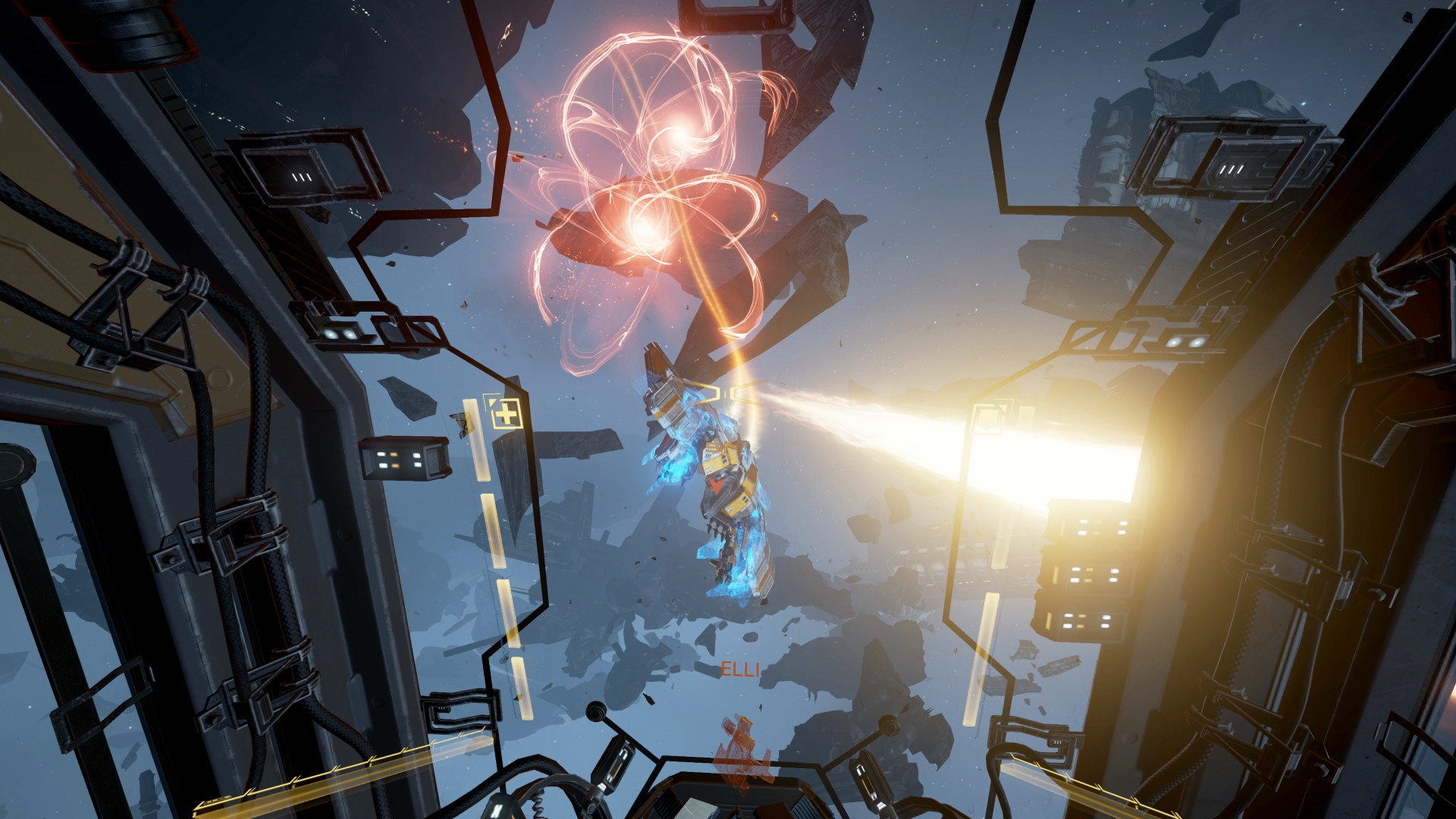 In keeping with the heavy emphasis on clones in EVE Online, EVE: Valkyrie also makes heavy use of clones, having the player control a pilot that remembers his previous missions, successes, failures, and most importantly deaths. The idea of playing a character in a game who is able to remember his death amuses me on two separate levels. The first is that it adds an element of realism to how he is able to return to the fray after dying repeatedly. The second, more personally entertaining one is that it almost gives the impression of the game being self aware that it is a game. Unlike real life, games will allow us to make fatal mistakes over and over again, granting us do over privileges in hopes that we learn from our mistakes and eventually get it right. This is taking an ancient game mechanic and working it into the plot, as if the character can be thinking, when a swarm of enemy ships closes in for the kill, oh crap not that again, I really hate the feeling of being blown into a million little pieces. If only game characters were self aware and had feelings. We would all be horrible people for inflicting endless deaths upon them over and over again.

While not perfect, EVE: Valkyrie does feel like a game and not just a moderately entertaining tech demo. The visuals are stunning and the level of immersion through the headset gets you about as close to being in an intergalactic warzone without actually receiving any training from NASA. Without there being a plethora of VR games spanning multiple decades to construct a template, EVE: Valkyrie was an impressive title in a relatively new gaming format. Being in VR is the main selling point for this game, but it succeeds because the developers built EVE: Valkyrie with the fundamentals of making a good game and not just using the VR factor as a gimmick to move units off the shelves. Because of the quality of EVE: Valkyrie I am looking forward to seeing what CCP Games does with future VR titles. They have used this title to show they are more than competent in regards to making a worthwhile VR game, so if they continue to expand and build on what they did here they could become a major force in VR gaming. 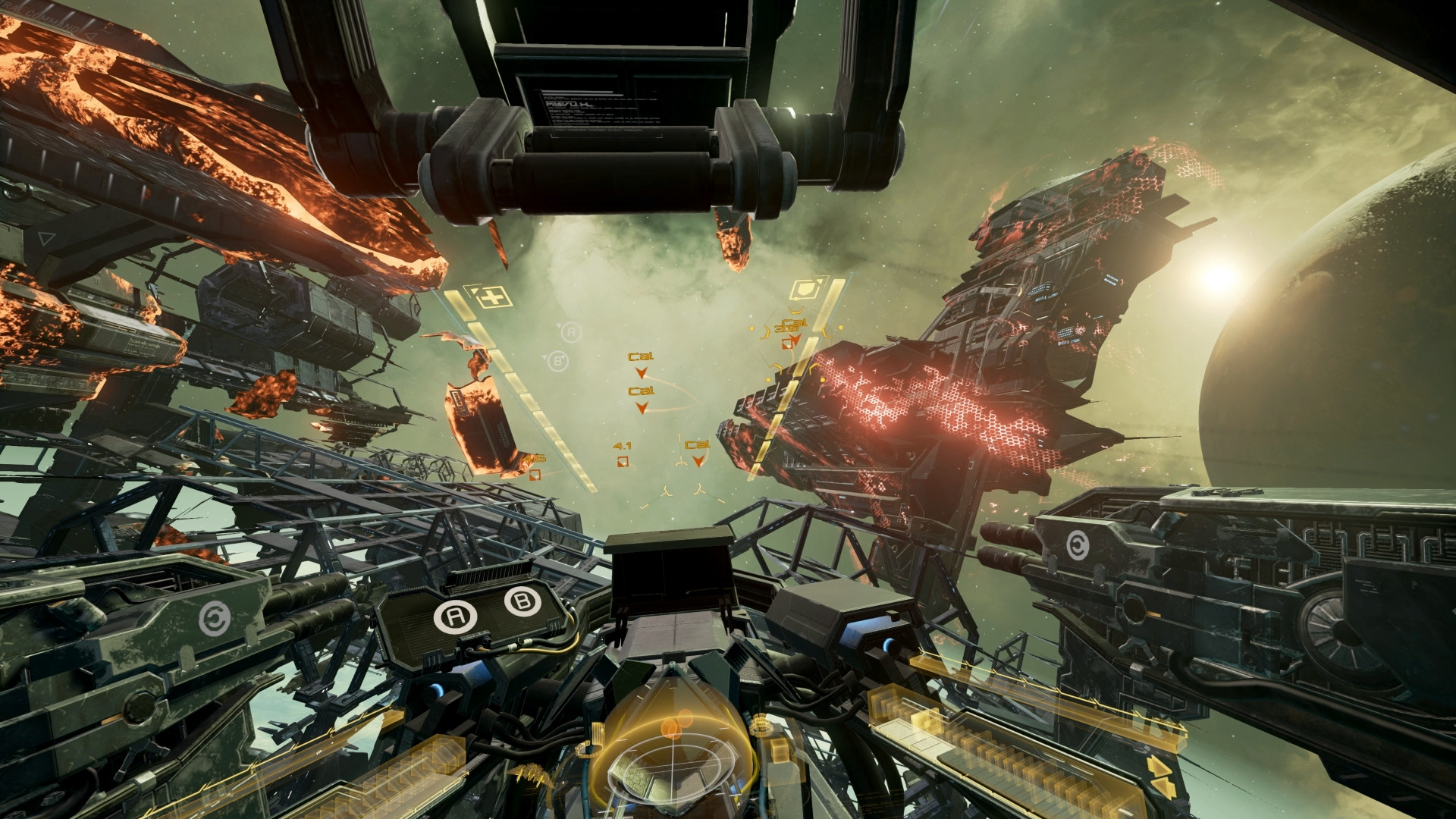 In honor of the anniversary of the launch of EVE: Valkyrie, Hardcore Gamer recently chatted with Lead Game Designer Andrew Willans and Executive Producer Owen O’Brien about EVE: Valkyrie.

[Hardcore Gamer] EVE Online has gained a lot of popularity and acclaim as an MMO. What are some of the things that had to be taken into consideration when shifting the universe from a living and breathing community of hundreds of thousands of people to a single player and small scale multiplayer experience?

[Owen O’Brien] The EVE universe provided us with the great backdrop Valkyrie. A fully fleshed out universe with as much depth, history and backstory as anyone could ever want.The challenge for Valkyrie was to find a fantasy within that rich universe that would be immediately understandable to people with no prior knowledge of EVE, but at the same time would resonate with the EVE Online players.The pirate factions were perfect for this. They allowed us the opportunity to resurrect some old EVE characters like Fatal, whilst at the same time giving us the freedom to create our own new narrative of the Valkyrie. Plus, ‘immortal space pirates’ is a very appealing fantasy to convey.

EVE: Valkyrie and EVE: Gunjack were both VR games that cover different sides of space combat, dog fighting in spaceships and manning defensive gun turrets respectively. Are there any other focal points that you would like to explore from the EVE universe in VR?

The single player plot of EVE: Valkyrie centers on a cloned pilot who remembers previous deaths. What was the inspiration for this idea?

[Owen O’Brien] The whole concept of clones is central to the EVE Universe and the Capsuleers. The tech the Valkyrie use has been shared and adapted by the Guristas – a fearless, professional and highly-organized pirate faction – so it’s a little more rough around the edges that the tech used by the Corporations. 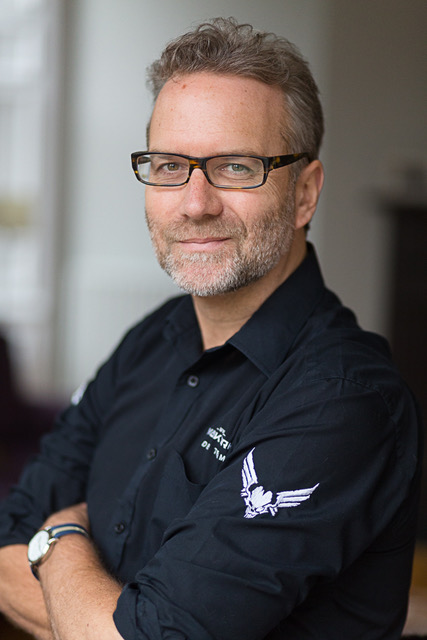 Are there any major expansions planned for EVE: Valkyrie?

[Owen O’Brien] Yes, definitely. With CCP poised to break even on the initial thirty-million-dollar internal investment in VR, we have the confidence and momentum to look further into the future with EVE: Valkyrie. The plan is to keep growing and developing Valkyrie along with the game’s community. We have already released four free updates with more coming soon. More details on that soon.

Do you believe it will be feasible in the near future to have EVE Online crossover into a VR supported MMO?

[Andrew Willans] That’s definitely more a question for the Reykjavik team to comment on. Do I think it could work? Absolutely. VR is an incredible platform and developers are constantly pushing the boundaries of how different genres can best utilize the opportunities it offers. We think EVE: Valkyrie proves that VR multiplayer games can have the same kind of lasting appeal as other multiplayer games, provided you back up your initial offering with substantial post-launch support.

Cross-platform play across consoles like Xbox One and PlayStation 4 is largely non-existent, yet EVE: Valkyrie connects all players on the PSVR, Oculus Rift and HTC Vive. What were some of the challenges with making this cross-platform play happen and how were you able to overcome them?

[Andrew Willans] It was always our goal for Valkyrie to be a cross-platform game, so development on PC (both Oculus and Vive) and PS4 happened mostly in tandem. This ensured that the design decisions we made were for the benefit of the game (and gameplay) rather than any platform, as we wanted to ensure we had as many players in our matches as possible. Every platform presents its own different set of challenges. PS4 was slightly more involved as we utilized some of the features provided by their OS for friends and party chat support, and of course we had a retail presence with Sony so we had to go through the disc submission process.One of the more logistical challenges for a small studio making a cross-platform VR game is testing. Thankfully our partners were keen to provide us with all the latest hardware, but juggling all those headsets, cameras and controllers was a mammoth task at times. Our desks were often buried under cables and cool tech. Tough life, right? 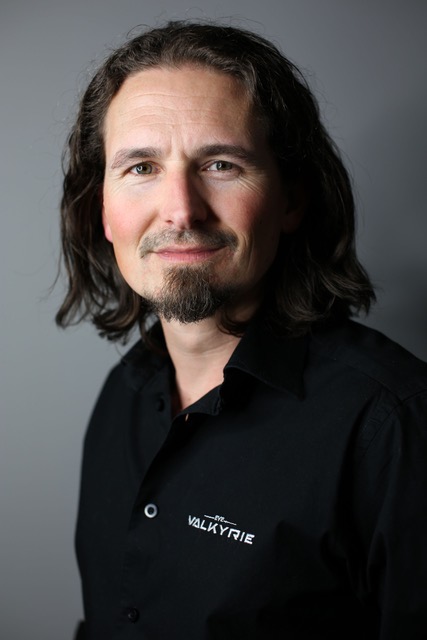 As VR technology becomes more advanced what are some ways you would like to see it implemented in games?

[Andrew Willans] The year ahead is incredibly exciting. We still don’t have a standardized input for VR so I imagine there’ll be more advances to get us close to something we’ll consider the best method of interacting within VR. Seeing my hands represented in VR for the first time was as much a “wow” milestone for me as the first time I strapped on the headset! Creating believable haptic feedback (through force feedback gloves etc.) will catapult the sense of presence and immersion to the next level. Can you imagine reaching out and picking up a virtual sword, gun, flight stick or steering wheel and actually feeling it? That’s the holo-deck dream right there! Even as developers we are constantly surprised and challenged by the new technology and the opportunities it creates. It’s a been, and continued to be, the most exciting area of games development to be involved in right now.

For more EVE coverage, be sure to stay glued to Hardcore Gamer as we head out to CCP Fanfest in Iceland.