It’s hard to believe that it has been over eight years since the first Watch Dogs was first announced and we’re already onto the third installment. The open world franchise has gone through various identities, from grim to highly stylized, and Ubisoft is looking to go a little bit in-between with Legion as London has fallen into harsh times. As we anticipate getting more time with the game at the end of the month, we were able to sit down with Game Director Kent Hudson and pick his brain about what makes Watch Dogs: Legion special.

[Hardcore Gamer] What were some of the challenges in recreating London at such a massive, detailed scale?

[Kent Hudson] One of the challenges of course is building something that is not one-to-one scale to the real world, but also making sure that the layouts and landmarks and the neighborhoods and everything are recognizable. In fact, when we have a journalist who played in London, or who have lived in London, they actually find they don’t need the GPS system or the waypoints to get around the world, which is really cool. They’re like ‘ah I know where this is – I used to drink at that pub,’ so people have actually responded to it very well, but it is always a challenge to say ‘ok what do we include, what do we take out, how do we compress these areas, how do we stay true to the spirit of this’. But one of the bigger challenges actually is, since this is a game about people, it’s not just environment art; it’s not like ‘hey let’s just build Westminster Abbey and we make sure to build Big Ben and the landmarks you expect to see. We really put a ton of effort into making sure that the population of all the people who live and work in all the boroughs have that personality, the backstory, the clothing, the voices, the fashion, the activities, all that stuff, because it feeds into the promise of the game which is building your team out of these unique people, so I think that was probably the challenge that was most unique to our game, was not having it just be this humongous mass of people no matter where you were in the city, but actually being like, if you go to Camden, you’re going to hear different music, see different fashion, have different stores that sell you different stuff to dress your characters with, then if you go to Westminster or the other areas. I think that really making the way our people are connected to the gameplay and also connected to the world, that was a huge undertaking for us. It took a lot of effort, but I’m happy where we landed.

Were there any spots that you personally enjoyed working on or using in the story?

So, I have to say, I was not super involved in the world direction, that was a different person on the project, so I can’t speak too much in helping to build certain areas, but there’s definitely areas that I really love, and some of them actually, to give you a little inside baseball, the Boroughs Uprising System where you do the activities around the boroughs and you get the Capstone missions, that was not in the game until after we got the extra time last, I guess it was around last October when we got our extension, and that’s one of the things we added to the game. When we got the extra time, one of the things we realized we really weren’t doing enough with the iconic landmarks in London and so we made sure that those Capstone missions that you have at the end of each Boroughs Uprising takes place in an icon location. One of my favorite by far is the [spoiler] Westminster one ends with doing a spiderbot sequence inside the gears of Big Ben, which is so rad. Like you look up and you’re like ‘man, Big Ben, there must be something there,’ and it turns out you’re right. We have a really cool mission at the London Eye, which I think we have a different name for in the game. But so the use of those landmarks through the Borough Uprising System, which we really were only add this year, I think is probably my favorite single thing about London is taking in that classic icon locations. 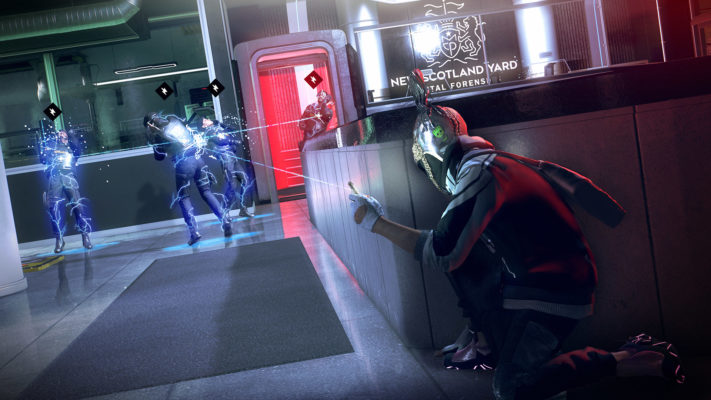 Can you talk about side story mission structures? With so many unique characters to recruit, how are recruit missions created? Are they randomized?

It’s actually, not to cop out, but it’s kind of in the middle. So basically, the game is procedurally generated for each player, so it’s not like we generated millions and millions of people offline and everyone’s going around the same London. The people in your game are unique to your game. But at the same time, they’re not randomly generated. We got this system called Census, and what it does is, when we generate people for the world, we start with this massive database of all kinds of information. So you got where were they born, what’s their ethnicity, what’s their age, what are their relationships like, what part of the city are they from. We actually correlate all this data together as we assemble them piece by piece so that, what you end up seeing on the screen is actually a fully-realized human being. It’s not, what I call a bucket of trivia, which would be, if you look at the extended bio and it shows ten random factoids that don’t make any sense together, we put a ton of effort that doesn’t happen. If you look at what their internet searches were and where they were born, and who their friends and enemies are in the world, it all forms into a cohesive person. So we did a lot of work to make it procedural but not random and not like some of the rough edges you see in some of the procedural generations. So yeah, we tried to make sure everything about a person is modeled based on connections to other parts of them so they come out as fully fledged people.

Can you recruit all of London or does Dedsec have a max capacity?

The max capacity right now is forty on your team. That’s the max you can have right now which is a number we’ve kind of gone back and forth on. If you’re at forty and there’s someone you absolutely need to have, you do have the option to remove people from your team, you can boot them back into the world so you can add someone new to the team.

Watch Dogs 2 was an improvement over its predecessor in terms of style and tone. What are some of the key elements in Watch Dogs: Legion that have improved or focused upon that is going to help carve out its own identity?

I wasn’t here at the conception of the project, when Clint [Hocking] and the core team were coming up with everything, but I think one of the big things was really making it a game that’s speaking to the current issues in the world. Obviously Brexit was a jumping off point early in the project, and since that happened there has been a whole new level of unrest and protest going on in the world. We always wanted to tackle that head on, and examine those subjects and treat them with respect. If you go through the game, there’s sort of four, the main story line is of course about who’s zero day, who did the bombings and all that happened, but there’s sort of four themes in the story that are wrapped up in the different villains and so we tried to really take head on the topics we’re examining. So you look Richard Malik where he guides you through the surveillance state and you go on the story with him, and that’s all about government spying, government overreach, datamining people without knowing it, how people’s information is abused, how the government can intrude in people’s lives and the loss of privacy, topics that are very relevant. Then you look at the Nigel Cass line and that’s about the militarization that you can see on the streets and in the cities. The storyline about Skye Larsen is about technology’s role in our lives, the ethics around artificial intelligence, the ethics around where technology has been so embedded in our lives. So I think that was one of the early key things that was very important to take these very seriously and not make light of it and use it as a backdrop to examine these scenarios. I think another piece of it was trying not to go full Grimdark, because these are serious topics but the, for example, Bagley AI character even in a serious scene can crack a gallous humour joke and bring a little bit of levity to it, without making fun of it or taking the subject matter lightly, but at least make it feel like it’s this super depressing slog to play through the game. We spent a lot of time to strike the right balance where you get a chuckle and the theme doesn’t feel oppressive, but we’re still taking it seriously and taking it head on. That was a really difficult balance to strike, for sure. 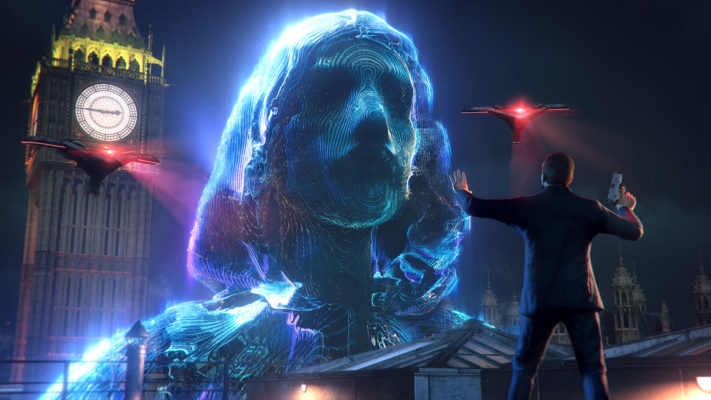 We’ve seen what Ray Tracing can do for Watch Dogs, but what other technological features were you able to harness from PC and next generation hardware?

We got your usual ones, we are doing Ray Tracing on both of the next-gen consoles as well as PCs. Obviously with the solid state hard drive, you’re going to have better loading times and faster streaming. You’ll pick that up in your initial load when you load into the game as well when you fast travel, so those are definitely niceties. We’re also, especially on the next-generation platforms, pushing the rendering. So around last year around this time, or maybe a little earlier before we slipped, it was ‘OK, only PS4 and Xbox One, and then high-end PCs was kind of its own platform’ and then as soon as we realized we were going to be shipping around next-gen – and next-gen was going to be an upgrade after we shipped in March, because that was the original ship date, but once we realized that where it was going to line up to where our ship date was going to be so close to next-gen, then the next-gen consoles with the advanced rendering features came to the forefront and something we focused on intentionally. I was in the studio last week and happened to stop by a space where they were looking at the, I believe it was the Xbox Series X build, and they were looking at the HDR, contrast, depth of field, distance lighting, atmosphere and a bunch of… I’m not a rendering guy, so I don’t know all the hardcore technical stuff they were doing but the game looked like, knock your socks off beautiful on that screen. I don’t know all the technical niceties other than Ray Tracing and of course 4K and all the buzz-wordy things, but in general the game just looks spectacular on the next-gen consoles. And the cool thing is that we’re doing the thing where if you buy it on the current-gen console you get the next-gen console upgrade for free. If you ever do jump from this gen to the next, the game will be waiting for you.

Watch Dogs: Legion will be available on PC, PlayStation 4 and Xbox One October 29, with PlayStation 5 and Xbox Series X/S versions coming at their respective launch dates.