Yacht Club Games’ debut title Shovel Knight recently released to widespread praise after a successful Kickstarter campaign last year. Hardcore Gamer was lucky enough to chat with designer/director Sean Velasco and pixel artist Nick Wozniak (Woz) to discuss their retro-styled game, and what they and their friends have planned for the future.

[Hardcore Gamer]  To start off, could you describe Shovel Knight for anyone who might not be familiar with the game?

Woz: Yeah absolutely. Shovel Knight is a classic, retro platformer that is accessible to people of this age, you know people who have grown up on games that were a little easier than the NES games of the past, but it’s also something that pays homage to that whole era of NES games. It’s a platformer, it’s 8-bit looking kind of NES style, not quite adhering to NES limitations, but looks like kind of a rose-tinted view of what the NES games were.

Sean: And then of course in addition to having and 8-bit ENS style aesthetic, we have a lot of modern gameplay sensibilities that we’ve integrated into it, and then where it’s made sense for us to keep those classic gameplay elements then we’ve really done that too. So it’s kind of just like a big, warm hug to nostalgia players, or like an 80s nostalgia trip. But if you’ve never played a game like that before it’s also just a solid, cool game with great characters, good humor, excellent gameplay ,wonderful music. So we’re hoping that even young people, or people that don’t have any type of nostalgia for this kind of game, will be still be able to enjoy it and even develop their own nostalgia based on this. 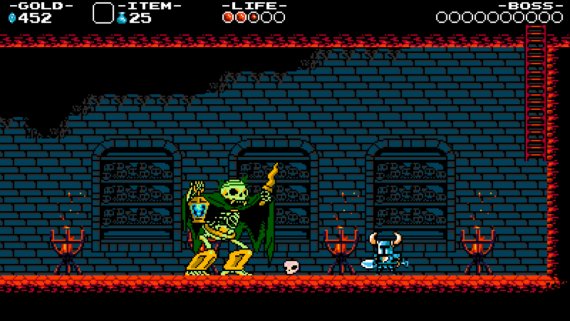 What exactly is it about that classic style that appealed to you most?

Sean: Well, I think it’s not just the aesthetic, it’s like everything about 8-bit. It’s how the game looks, it’s how the game sounds, it’s how the game feels. It’s also the focus gameplay wise on what you’re doing. So for like an NES game, many of them were based around very simple mechanics, but then the complexity of the game and all the fun of the game came from experiencing the world around you. And so with Shovel Knight it’s the same way. You can only do a couple things, right: you can shovel, jump, and do a downthrust that we call the Shovel Drop, and it’s very limited. But because you only have a few actions you can use all of those and sort of push up against the boundaries of the world and experiment. So I mean that part of the NES mystique is also something we wanted to just really emphasize, and then on top of that we have an NES style box, and manuals, and we’re going to do a whole marketing campaign basically. Like merchandised things, like the kind they would have back in the early 1990s, right, like during Mario mania there was like Mario sheets and pillows, and all this stuff. And I’m not saying we’re going to go overboard and do anything crazy like that, but that type of feel, you know like strategy guides, holding an instruction manual in your hands, trading information with your friends on the schoolyard.

Woz: Yeah, the ability of a fan to just like envelope your whole life in something you’re interested in.

Sean: Yeah, like if you want to get into it then I think the tools are available for you to do so. And I think so much of that is because it’s an 8-bit style NES game. You know almost exactly what it is from the moment that you see it or experience it. So then you can kind of decide like “Well do I love this? Am I a huge fan of it?” you know, or not, and you can know and kind of move on or you can get like really super hyped.

Because of all those influences, and because it borrows so heavily from the NES era and those wonderful games, was it extra important for you guys to put Shovel Knight on Nintendo platforms?

Sean: Actually with the Kickstarter when we started our project we didn’t have permission from any platform holders to develop Shovel Knight on their platforms, so even though we had experience in the industry it was our first time out as a gaming studio, and so even just getting in contact with all the platform holders was a challenge in and of itself.

Woz: Yeah it’s a task no matter what aspect you’re looking at. So yeah we consciously chose to pursue Nintendo.

Sean: Because of exactly what you said; this is a Nintendo game. Because the kind of games that we love, Nintendo exemplifies those in so many ways. Games that are based on gameplay, games that are fun and have humor and just kind of ooze quality.

Woz: Yeah I think when someone says something is a Nintendo game I think there’s more weight than that’s just the platform it’s on, and we really wanted to fully embrace that, and that’s why it going on Nintendo platforms really just fits the philosophy of making Shovel Knight itself.

Sean: Which isn’t to say that we wouldn’t consider other platforms, it’s just that right now like we were saying we’re half a dozen people and we have our hands pretty full, as you can imagine.