When the very concept of this monthly column came to mind, Duke Nukem Forever was the obvious choice for coverage. Originally announced in 1997, this Quake II engine powered game looked to be a perfect follow up to the seminal Duke Nukem 3D. After a decade and a half of false starts, jokes about the long development time, and periodic “no, really! It exists” type articles, Gearbox took to PAX Prime to announce that they would finish and release the darn thing. The reasons for the lengthy delay are myriad. Unconfirmed rumors swirled about an office-wide Everquest addiction. Feature creep and restarts abounded. Finally, in 2011, the title was released to the morbidly curious public. It was savaged by critics and its audience alike, with the PC version managing to average a score of 54% on Metacritic. Re-visiting this title caused no small amount of nervousness. Frankly, the issues were abundant, but the show must go on…

Of the numerous complaints leveled at Duke Nukem Forever, the issue of misogyny would be the most obvious and troubling. When I first played it, I didn’t pick up on this. It wasn’t until after playing and then reading the reviews did I even note that some people felt this way. Going through again, this issue still eludes me. Obviously, the reviewers and commentators were taking the humor of this game at face value. This is a foolhardy stance to take. While not as much in his two dimensional titles, Duke has always been a parody of the ridiculous, over the top action hero of the ’80s and early ’90s. For evidence, one only need to look at the fact that he pretty much only spoke in sound clips from said films. The 2011 title only solidifies this. This is pure, full bodied satire. Duke is a horrible person and the comments and actions he takes are atrocious. The entirety of this title is a deft, well-observed mockery of the typical alpha-male. 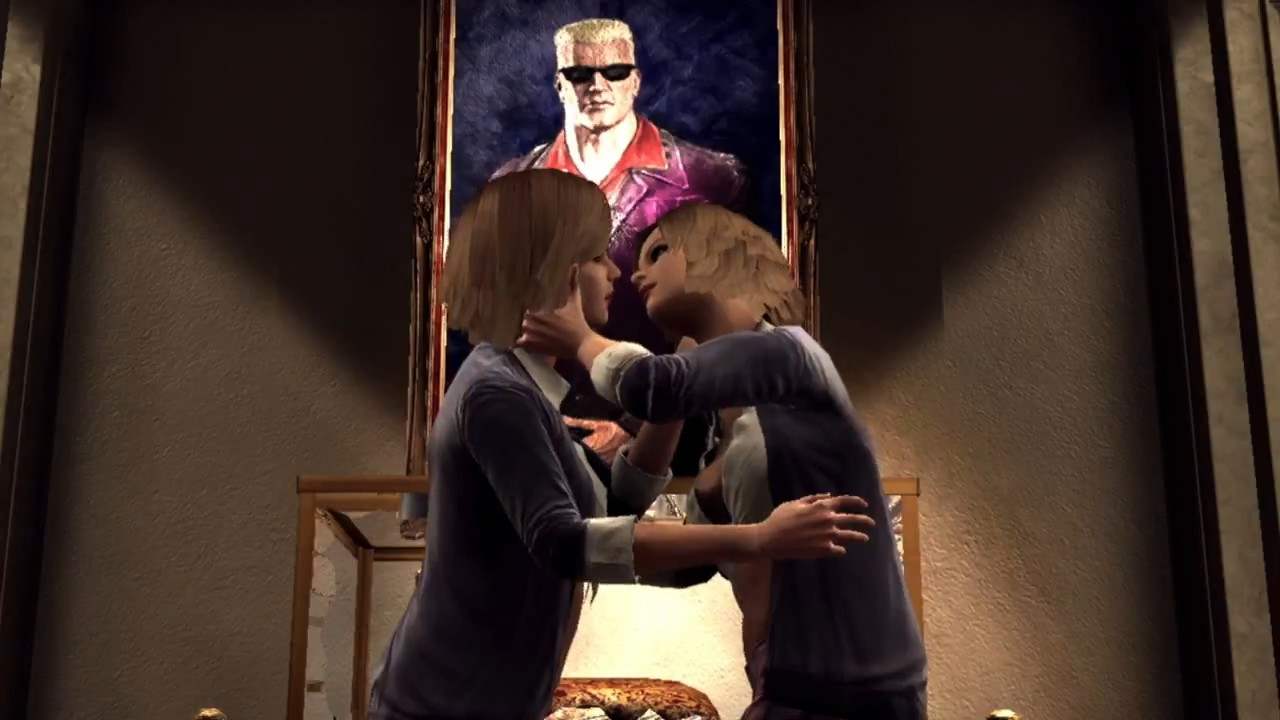 Though, I wouldn’t expect those people to have a problem with inter-sibling incest.

The story itself plays out like the fevered dream of an ex-jock past his glory days of high school. Passed out in his recliner after binging on a twelve pack of Schlitz, his faithful schnauzer standing on his overlarge, ponderous stomach, while licking clean the vomitous drool dripping from his master’s mouth, the man slumbers. He grew up thinking that he would be the hero, the big man. Now he can only play out his exaggerated fantasies in the slumbering world, away from his horrible nag of a wife and the ill-behaved spawn that he begot. In this realm, he is the savior of mankind. The only man who could drive off an obscene alien threat. Women adore him, men want to be him and anyone who disagrees with his methods are both wrong and soon to be vaporized by aliens. Oh, and he still thinks poop is funny.

In regards to design, this title is all over the place. It plays like an old school shooter that had its hamstring cut with a rusty saw blade. While basic weapons and level design found here would lend itself to quick action, it feels ponderous and slow. Where the action is better suited for a “health pack” style life system, this one went with the Halo regeneration system. Despite numerous tweaks to the settings the aiming never felt right. Revisiting this title after time and critical experience also revealed a decided lack of punch to the weapons. All said, the “action” in this action game has not aged well. Even with a reduced level of hope, this game failed miserably. 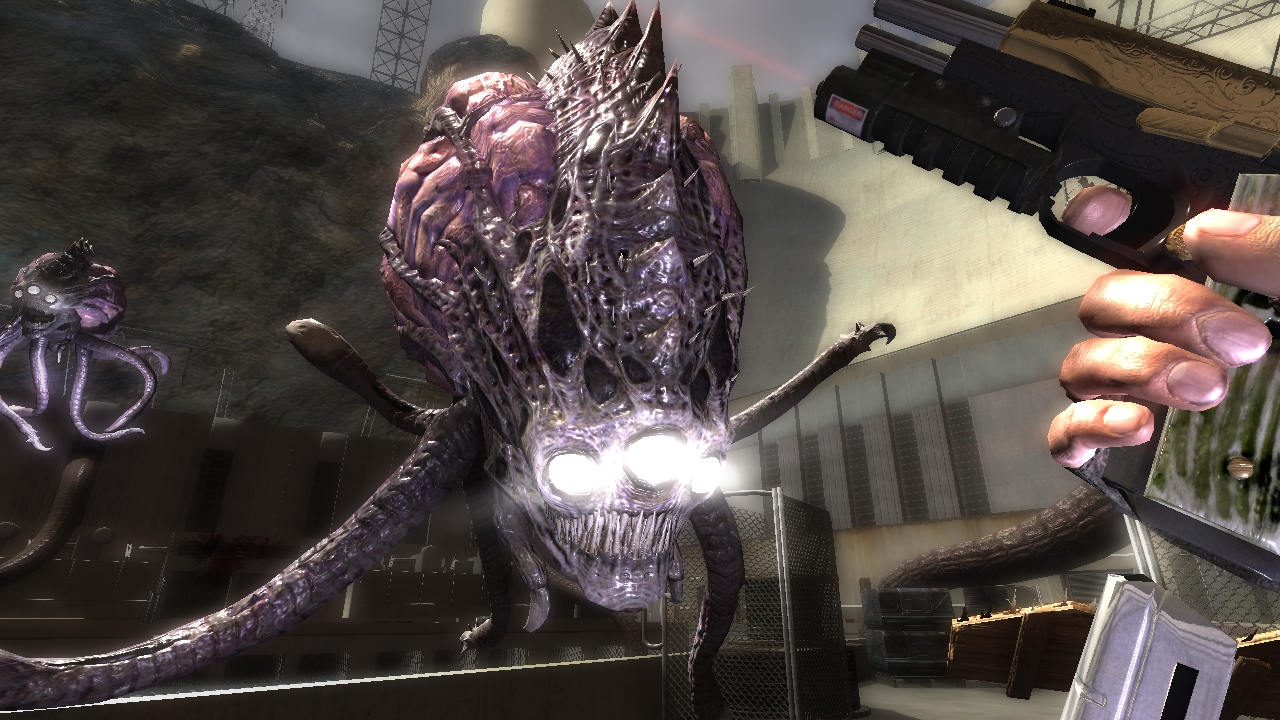 I am going to go on record as saying that the updated enemy designs are quite cool.

They also seemed to love platforming sections when they put this together. This would be similar to the way I love music; just because I appreciate it does not mean I am any good at creating it. When crafting a first-person platforming experience, certain care must be taken. The tilt of the view must be just right, the sense of momentum has to be solid and the fact that the player does not have the advantage of seeing the entire character’s body needs to be taken into account. To date, only one game has managed to nail first person platforming: Mirror’s Edge (this acknowledges and then dismisses the otherwise fantastic Metroid Prime series.) Duke Nukem Forever is no Mirror’s Edge. So, while maneuvering a shrunken Duke across a fast food grill is a cute idea, it is no fun.

The technical issues do seem to have been improved. When initially playing this, load times were atrocious. One could argue that the wait for a reload upon death does add a “risk” to the risk vs reward paradigm; these were unacceptable then. Fortunately, load times that originally ran between a minute to a minute and a half a pop have been dramatically reduced. The longest time experienced was thirty seconds. Kudos to Gearbox for actually fixing this. They have also added the ability to carry more weapons, which was appreciated. Still, the wonky driving physics in the overlong monster truck portion still remain. Numerous other glitches, like clipping and tearing issues continue to be a problem.

Finally, the astute will notice that there is no mention of the multiplayer. There is a reason for this: it was a dumpster fire then and remains so now. This fact has been observed by the rest of the community, as they seem to be staying away in droves. Plodding, poorly balanced and just plain lacking in fun, this feature is simply not worth the effort to experience. 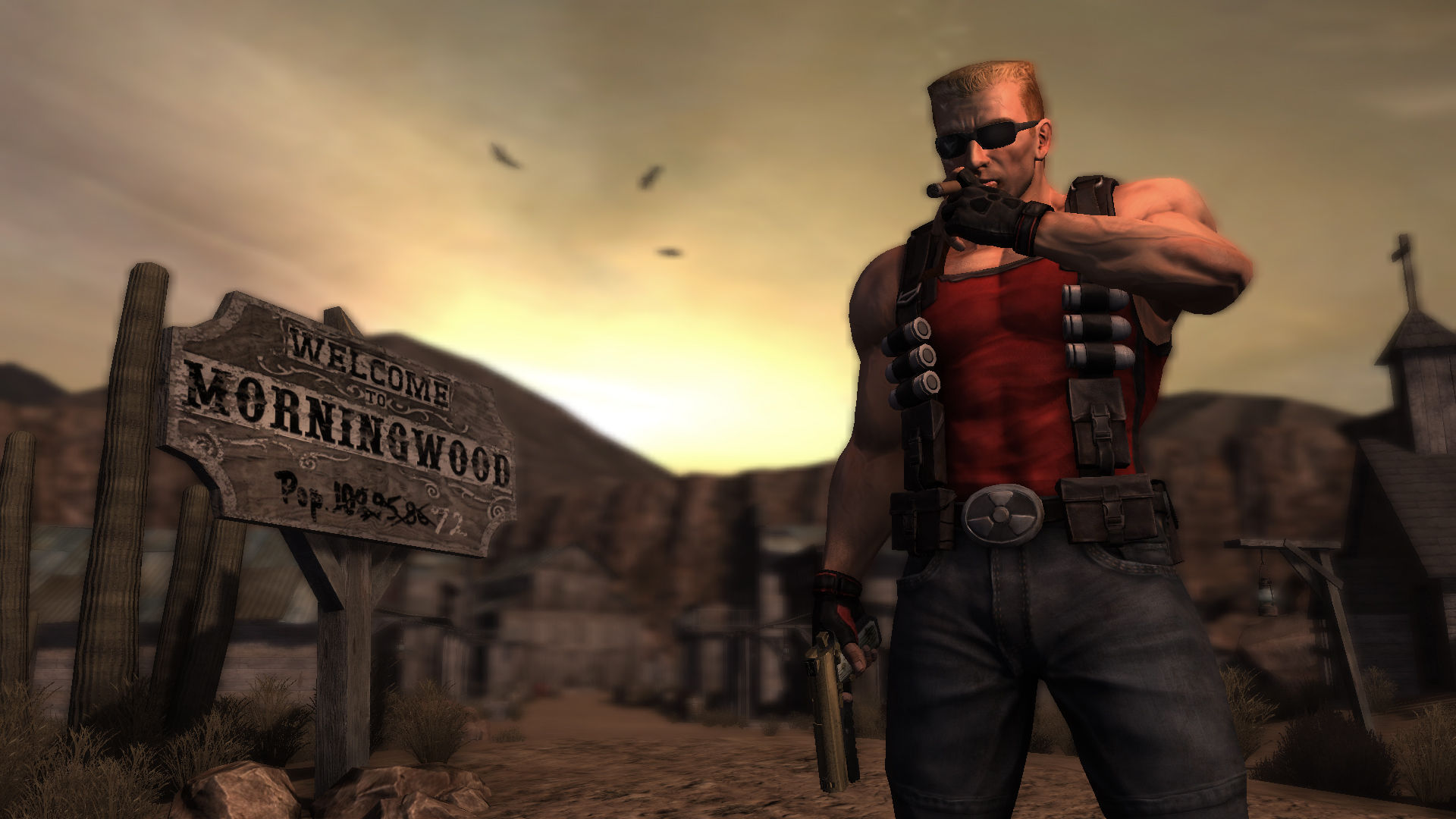 Above: Duke and a sign representing something that too much whiskey has rendered impossible for him.

Frankly, when conceiving this article, I fully expected to advise people that the immature content was simply misunderstood and was being viewed through the wrong lens. When playing it again, though, the other issues came to the fore. This title would have been something special were the creation process managed better and the title released on track. It is still an important part of gaming history: an object lesson in hubris and poorly-implemented plans. People interested in the evolution of the genre, as well as students of game design, should spend some time with this title. Anybody who simply wants a good time should give this one a pass.