This past weekend was an action sequel-palooza for me. After seeing John Wick Chapter 2, I found myself in the mood for more senseless violence. Thus, I watched The Expendables 2 late Saturday night. Surely, this film is an emotional tour de force that was unfairly snubbed by the Academy. Refusing to grant even Jean Claude Van Damme a nomination for his “Sheep Speech” was a travesty unlike anything out of human history. Upon completion, I realized I was still wide awake and began perusing my PlayStation 3 library for something easy to pick up and/or put down. This is when I discovered that, in a fit of stupidity and/or drunkenness, I had purchased developer Zootfly and Ubisoft’s The Expendables 2 Videogame and downloaded it. Considering that the game garnered a 32% rating on Metacritic, it was certain to be a treat. So, in a testosterone fueled haze, it was loaded and experienced.

Acting as a prequel to the movie of the same name, The Expendables 2 Videogame casts four members of the titular mercenary squad as they gather information on the whereabouts of the Chinese businessman that was rescued at the beginning of the movie. Thank the preferred maker for that, as this massive gaping plot hole nearly rendered the entire film unwatchable. So, either solo with the ability to swap through any of the four characters at will, or co-op up to four players, players will be able to fill in the gaps with heavy ordinance in a twin-stick shooter type fashion. 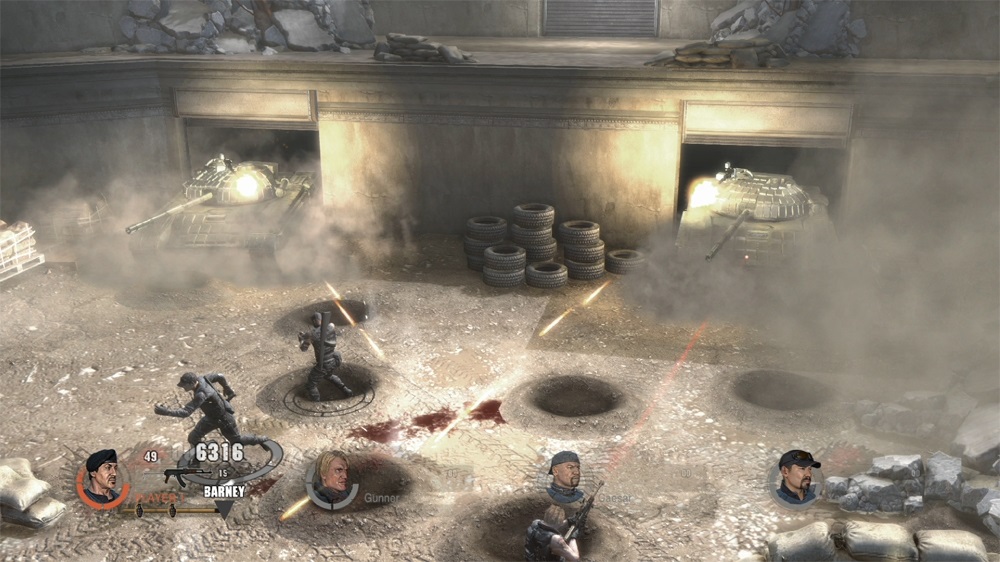 The crew itself is rather diverse. Players will be able to choose between Sylvester Stallone, Jet Li, Terry Crews, or Dolph Lundgren. (Jason Statham stayed the hell away, either through choice or luck.) It could be argued that these are the actors playing characters with specific names. This is fair. So, um, I think Stallone is Barney and Dolph is Gunnar. Wikipedia says that Jet Li is Yin Yang (*groan*) and Crews plays Hale Caesar. Wikipedia has to be lying, right? Oh. They’re not. It’s kind of a missed opportunity, as the character models are horrendous. Take Stallone’s for example. His face appears to be melting off of his skull. Some would point out that this is accurate to his true life appearance. I would not, however. Especially not on a popular enthusiast website. Have you seen him? Dude’s still jacked, and could pop my head like a grape. The only description that I would assign to his appearance is “sir.” This is especially true as I look like two different macaroni sculptures glued together with dysentery.

The gameplay itself is reasonably easy to pick up. Each of the four characters have two different ranged weapons in addition to melee attacks. The weapons themselves fit with the characters, so Stallone has a twin pistols and a revolver, while Jet Li has throwing knives and a submachine gun. It doesn’t really matter which character is chosen, as the enemies are surprisingly resilient. I know that if a grenade exploded on my chest, I would, at the very least, cry like a freshly orphaned child. These guys just turn around a little, as though someone threw an inconvenient water balloon and they wanted to stay dry, and then proceed about their day. Still, with both a recharging health bar, and the ability to get revived constantly, the game isn’t hard, just kind of a slog. 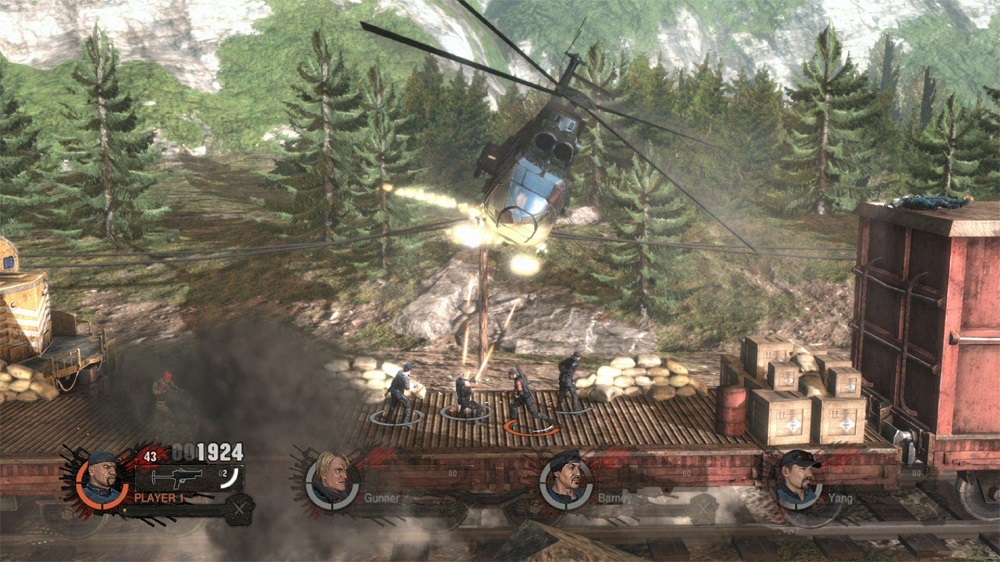 Of course, this does not take into account the true villain of the game, the camera. Well, “villain” is a bit of an overstatement. The camera has an annoying habit of not really following along with the action, so the group could be in the next area being installed with fresh speed holes while the camera lingers on the previous part of the level. It doesn’t seem to be intentional, which is why “villain” is being walked back. It’s more akin to calling over a toddler that is in the midst of a Valium haze.

Frankly, the graphics overall have a veneer of shoddiness coating the entire thing. Sand in the air looks like fake cotton cobwebs dyed brown. Explosions look like low res decals temporarily stuck to the screen. One cannot forget the cutscenes. Watching a helicopter crash should not be a exercise in hilarity, but The Expendables 2 Videogame pulls it off. 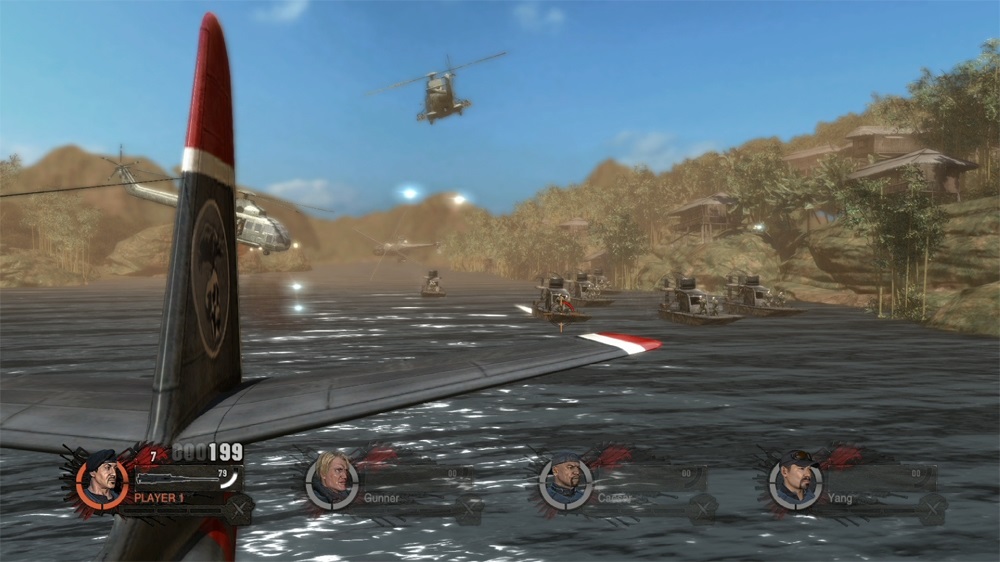 This column was started partly because I wanted a chance to defend some games that received horrible press but actually had some value, as well as an excuse to clear some of my shameful backlog on company time. Plus, sometimes bad games can be funny through the lens of irony. This is where The Expendables 2 Videogame lands. There is nothing good about it. The gameplay challenges the players’ persistence, not reflexes or problem solving skills. The graphics would get even the richest student kicked out of one of those worthless for profit video game creation schools. Everything about this game is inept and the only true Expendable was the purchaser’s money. Yet, as terrible, ugly and poorly designed as it is, one cannot help but to be amused. Obviously, one should not pay full price, but when it goes on sale for a buck or whatever, invite some friends over, grab a few beers and behold the glory that is The Expendables 2 Videogame.