Of all the horrific environments that exist in the world few can compare with the amount of traumatic nightmares that dwell within our own minds. Psychonauts is a game that explores this idea, making the contents of one’s mind into actual game environments. These levels inside the minds of other characters can lead to fantastic environments that aren’t limited to real world constraints (like that’s ever been a problem in video games) and designing the level to fit the featured character’s personality. Granted, the overall tone of Psychonauts is much more light hearted and humorous than the opening sentence may suggest.

Psychonauts takes place at the Whispering Rock Psychic Summer Camp, a place where parents rid themselves of their children for the summer so they can hone their psychic abilities. The camp is built on an ancient burial ground, which if you believe what you’re told, was used to bury arrowheads that are in-game collectibles. Centuries ago the land that would become the campground was hit by a meteor composed of the substance psitanium, an element that can strengthen the psychic abilities of those exposed to it and is also one of the many puns found in Psychonauts. This caused a few problems such as wild life gain psychic abilities, such as giving bears telekinesis, but also drove the human inhabitants insane leading to the construction of a nearby asylum.

While learning about Whispering Rock Psychic Summer Camp my inner child became upset that I was never sent to summer camp where I could train to be a Psychonaut, but as they say if something is too good to be true, it likely is. In reality Whispering Rock is a government training facility for an elite group of agents with psychic abilities. Only those recruited for the Psychonauts training program are admitted to the camp as its true purpose is to use the psitanium to grant and enhance psychic abilities of the recruits to raise into the capable agents to fight evil doers by literally getting inside their minds. 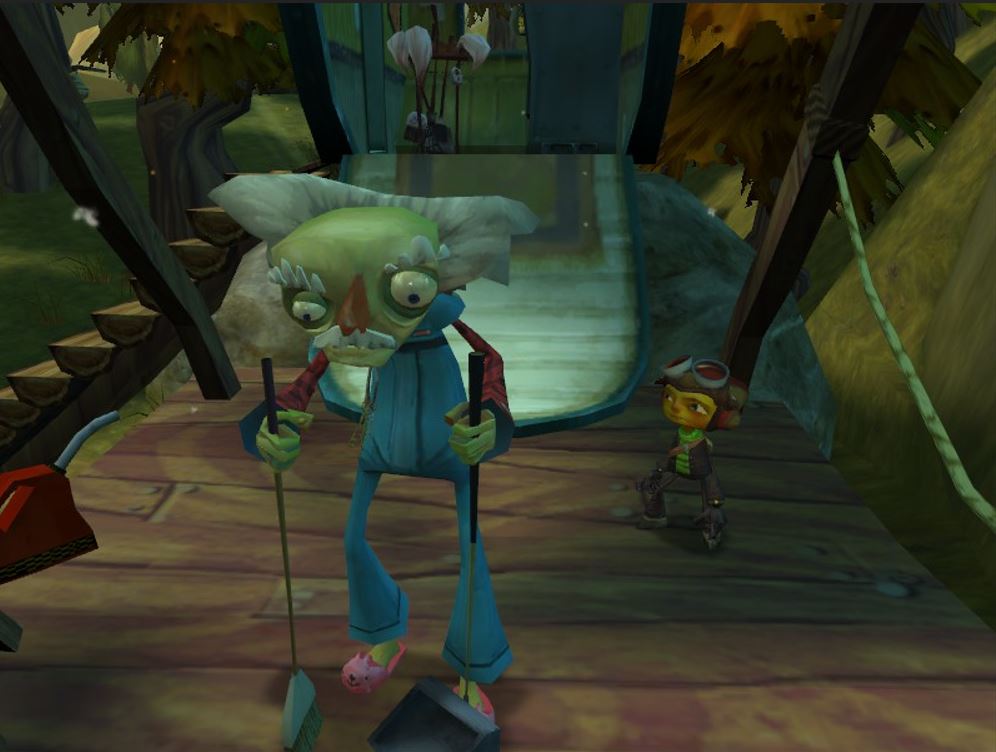 Razputin Aquato, or Raz as he is typically called, doesn’t enter the camp through conventional means. In typical rebellious youthful fashion, he defies his father’s wishes and runs away from family life in the circus, sneaking into Whispering Rock to become a Psychonaut. Sneaking into a area that’s run by those with advance psychic powers is doomed to fail and he’s soon caught by the senior agents who function as camp counselors. Much to his disappointment, Raz is not automatically entered into the Psychonaut training program because he broke into the camp. Instead he is allowed to remain there until his parents can pick him up. They do bend the rules a little bit and allow him to participate in Basic Braining after they determine he’s a not a lake monster.

Raz is rather adept when it comes to psychic abilities and despite the lack of formal training he completes Basic Braining with ease. This impresses Sasha Nein, one of the senior Psychonaut agents that runs the camp who may have also been a member of KMFDM at one point. Nein invites without officially inviting him for plausible deniability reasons to take part in some off the record testing. Raz of course is all for this and doing so leads him to making some rather disturbing discoveries about the history of Whispering Rock which leads into Raz going down the main plot of the game with many interesting and entertaining twists. 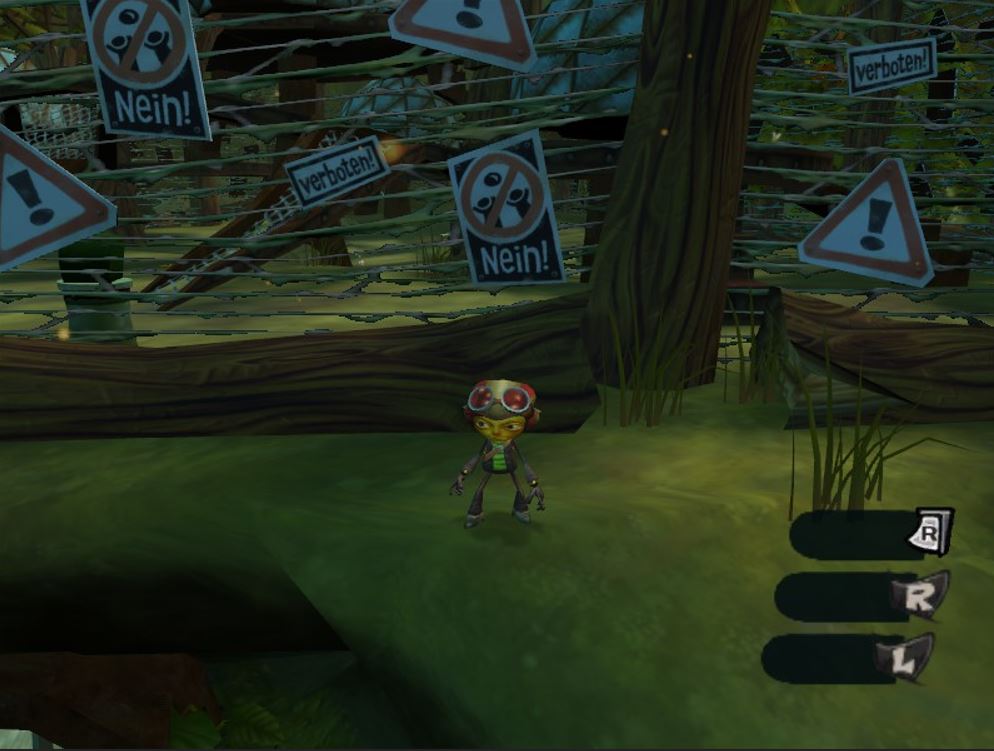 Psychonauts is an action platformer that takes place in both the real world and the more abstract worlds of the minds Raz enters. Whispering Rock campground is the hub for adventure in the real world where Raz wanders around, interacting with Pyschonauts and Psychonauts in training while learning about the history and hunting for collectibles. Entering the minds of other characters is where most of the action takes place, with each environment being an imaginative interpretation of of the character’s mental state complete with their own mental baggage and figments of their imagination as Raz battles their inner demons. As a Psychonaut in training Raz’s gameplay is augmented by psychic abilities he acquires and powers up throughout the game which include telekinesis, invisibility, levitation and pyrokinesis. These abilities will Raz overcome the many challenges he encounters, whether they be combat related or puzzle solving.

One of the things that made Psychonauts great was the different characters. Many of the characters traits are played up and exaggerated for comedic effect, like Dogen Boole wearing a tinfoil hat to prevent his psychic powers from making people explode. Other characters display some maladjusted traits but learning more about their history some of them are able to be viewed in a more sympathetic light such as Coach Oleander. Whispering Rock Psychic Summer Camp is filled with interesting characters who come off one way initially but become more layered once the player is able to get inside their heads. 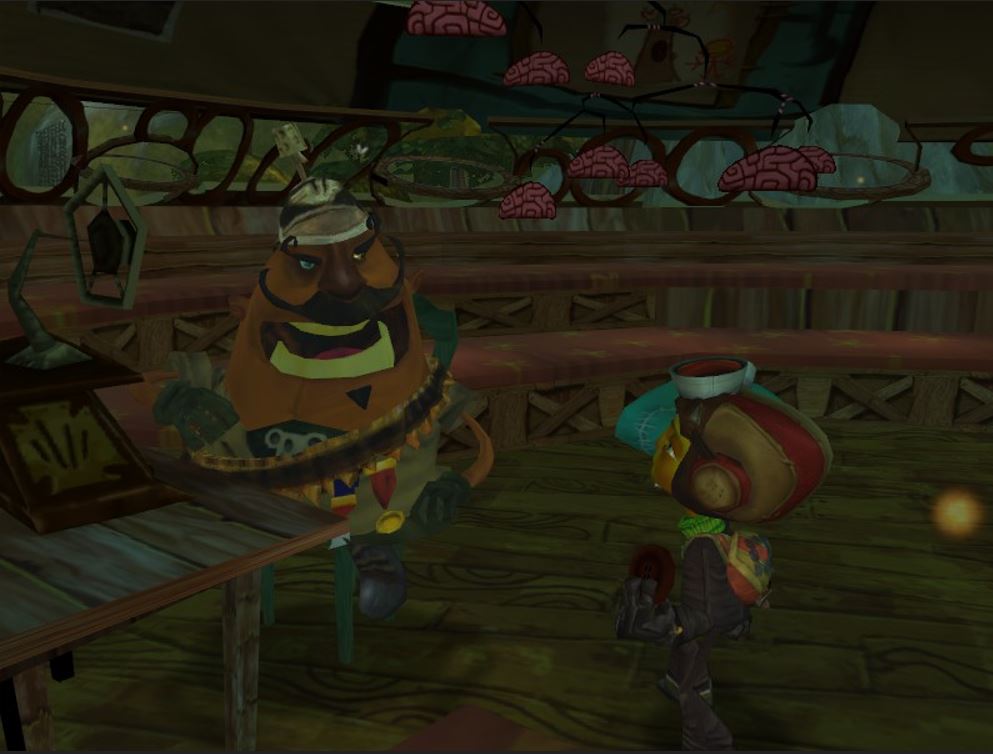 Psychonauts is one of those games that was met with positive critical reception but its commercial performance initially didn’t live up to its praise. Psychonauts has great game mechanics that would make it fun to play just on those merits, but its unique approach to storytelling and memorable characters made it a truly special game. Maybe Psychonauts was too different for mass appeal, but even with its mechanics showing their age its still fun to play and should be played every action platformer fan. The story deals with serious psych issues but also has enough humor and lightheartedness where it never becomes too dark. Psychonauts is a unique experience that’s equal parts memorable and fun. The artistic design shows some Tim Burton influence but also adds to the imaginative world. Psychonauts was originally released in 2005 for Xbox and PlayStation 2, but its cult classic status has achieved greater popularity after its updated 2011 release on Steam.