After completing The Last of Us Part II there was a strange compulsion to revisit the video game adaption of the final film in The Lord of the Rings Trilogy. I’m sure there was some connection but I just can’t put my finger on it. Growing up the NES, it’s only natural to be skeptical of video game adaptations of any film but the games based on the Peter Jackson films were actually good. This was especially pleasing since when my friends were watching this in the theater we would comment to each other “this level is going to suck,” typically with a massive battle sequence involving oliphant calvary or a giant spider.

The Lord of the Rings: The Return of the King is the same style game as its predecessor The Lord of the Rings: The Two Towers but only focuses on the third film instead of combining the first two films into the first game. It also was overall a better developed game and introduced co-op play. One of the standout elements of these titles were how they blended actual scenes from the movie into the game which was especially noteworthy in 2003 since the movie footage looked exponentially better than the game’s graphics, which to be fair weren’t bad for early 2000’s sixth generation console standards. Incorporating movie footage was a gimmick that probably got more people interested in the game than anything else, but it was cool seeing parts of movie again and the gameplay itself was actually pretty good.

The Return of the King was an action hack and slash game where players controllers characters from the movie and slaughtered orcs relentlessly. There were some other things to kill but orcs seemed to the be cannon fodder of choice in Sauron’s army. Depending on the level, the player had a choice of controlling Aragon, Frodo, Gandalf, Gimli, Legolas and Samwise and could unlock Faramir, Merry and Pippin. This fine was fine solo but was a bit more enjoyable on co-op mode. 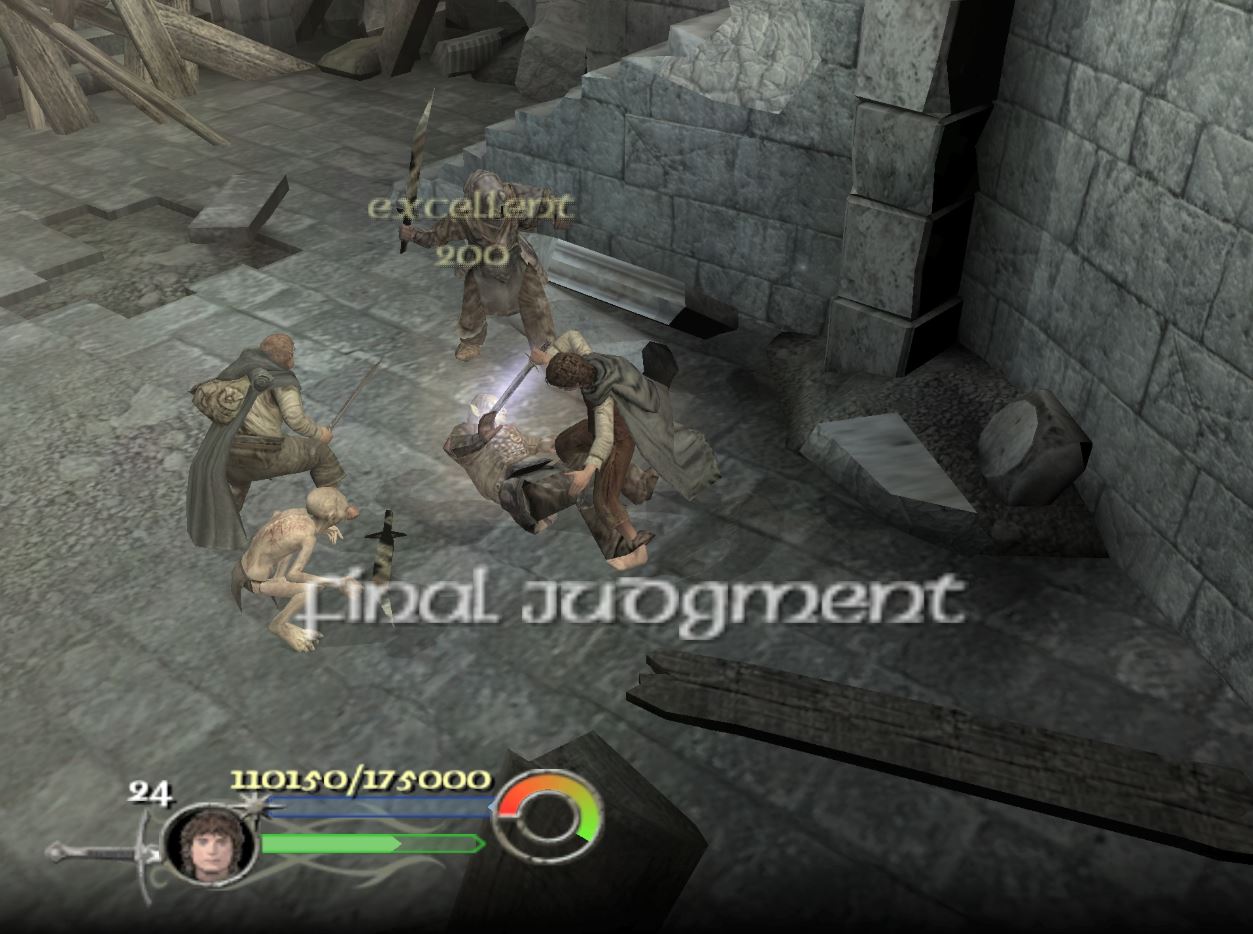 Movie adaptations of books are often criticized for changing things from the source material. Some of these edits are justifiable, since film is a different medium to tell a story than a book and certain narrative approaches work better in different settings. Also, as a general rule a truly faithful to the book adaption would be ridiculously long and unable to hold anyone’s attention so many edits and composites are done to varying degrees of success, though some of the Peter Jackson films may in fact be longer than the original books. The same goes when translating a movie to a video game, since extended ending sequence would be dreadfully boring to play.

The game adaptation doesn’t faithfully recreate the movie but instead takes some of the main parts and extends them into situations that are better suited for hack and slash. In the movie I don’t recall Sam running through Shelob’s lair, dispatching a battalion of orcs and a multitude of lesser giant spiders but the lack of battles during the bulk of the hobbits’ journey wouldn’t have lent itself too well to this style of gameplay. Plus the actual struggle between Frodo and Gollum in the movie worked well on film but the final battle between them in the game works better for this format, as ridiculous as that was. Though the option to fight Gollum as Sam was a welcome one, given that it felt like he was true hero in the film between those two hobbits. 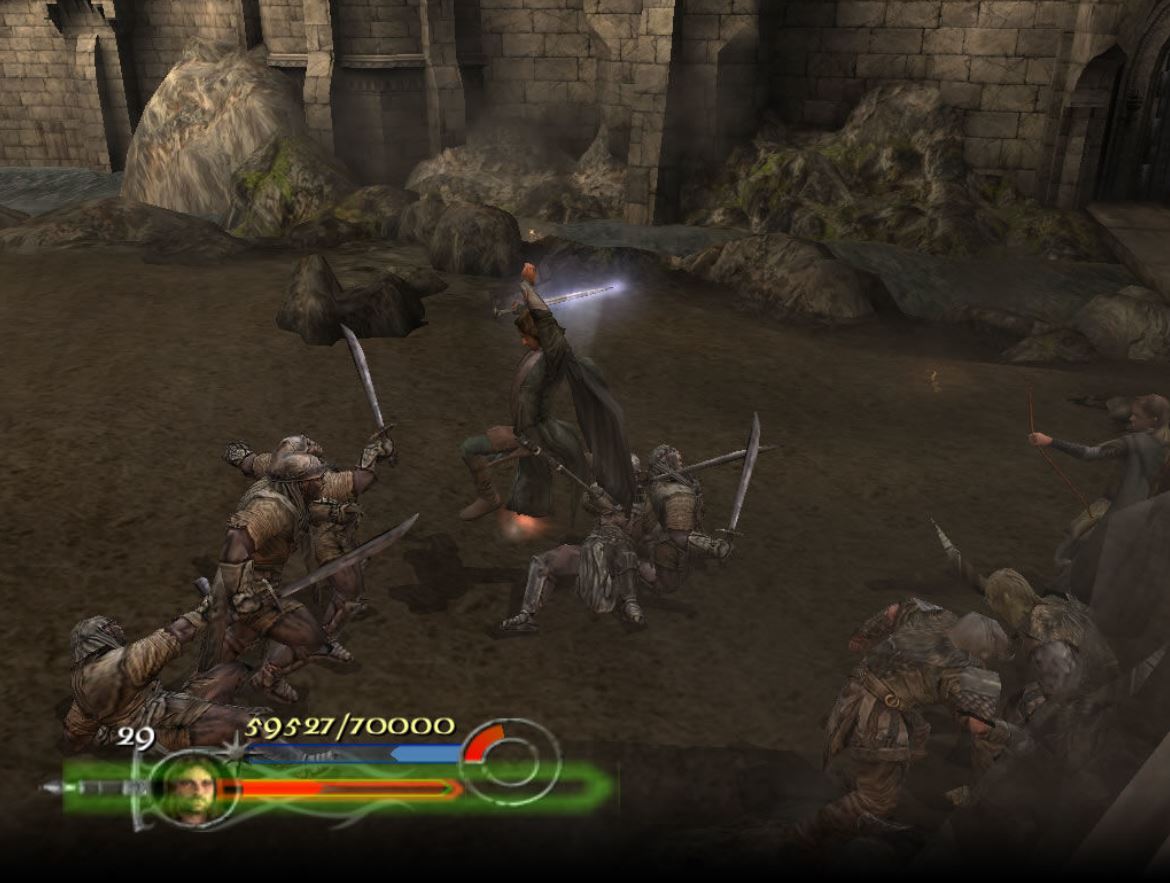 One liberty the game did take was actually returning a line closer to the original text from the book. Eowyn’s quote when she fought the Mouth of Sauron is ““But no living man am I! You look upon a woman. Éowyn I am, Éomund’s daughter. You stand between me and my lord and kin. Begone, if you be not deathless! For living or dark undead, I will smite you, if you touch him.” In the movie was just shortened to “I am no man!” This is a one in a million occurrence of an example where I actually preferred the quote in the movie. It states the literal fact of not being a man with womanhood implied and still adhering to the rule no man can slay the Mouth of Sauron, using the gender loophole to be victorious. It was just more succinct and better for trash talking but it’s hard to get upset when a game changes something from the movie to be more true to the book.

As the player progressed in the game they leveled up their characters by earning experience points through demonstration of combat prowess and purchasing upgrades for their characters. The character growth element did make the game more interesting and give it a light RPG element. To mimic the concurrent storylines in the movie there were branching level path where different playable characters were accessible, recreating the overall feel of the movie even if liberties were taken to make it a much more battle intensive journey. 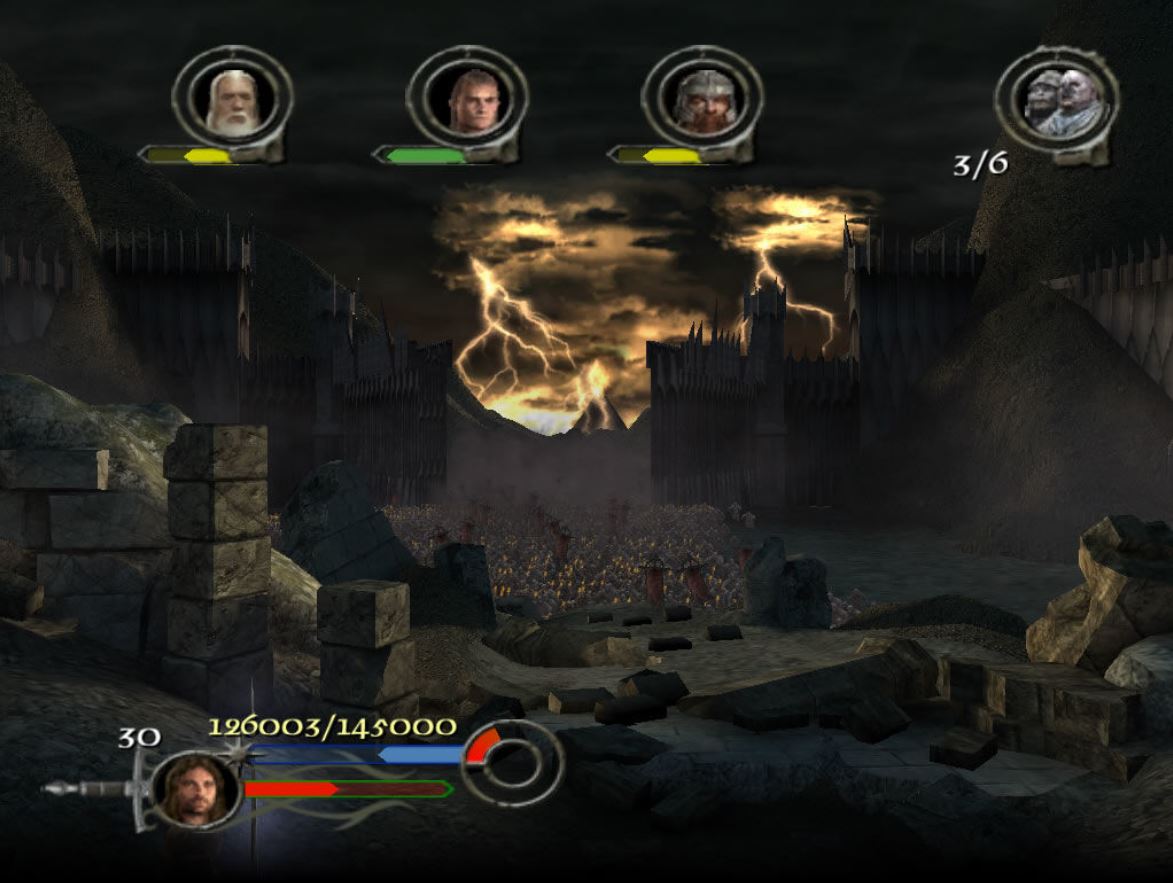 The way this game combined elements of the film with the game had a lot to do with what made it great. The gameplay, if redone exactly the same with a generic fantasy setting and no movie clips, would have still been a good enough game to enjoy but not memorable by any means. The Lord of the Rings: The Return of the King is a good game but a great game based on a movie. The Lord of the Rings films were a major point of interest in my circle of friends when they were doing their theatrical run, and the inclusion of snippets from the movie helped make the game feel like an extension of the cinematic universe despite the changes that had to be done to transform it into a game. Games based on movies have been around forever with varying degrees of quality, many of them being terrible, and this is an example of how the transformation from film to game should be done. Of course, the whole business of traveling to Mount Doom could have been avoided if the eagles weren’t lazy good for nothings who bothered to show up before the third act of the third movie.