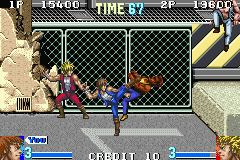 Ask anyone to name their favorite retro game, and they might answer Final Fight. They could also answer Teenage Mutant Ninja Turtles. Or The Simpsons. None of these games would exist were it not for Technos’ Double Dragon. Admittedly, this title owes its heritage to the likes of Renegade, but Double Dragon is the one that took the beat ’em up genre to mainstream success. The original and its sequels manged to earn them a cartoon, toy line and even a feature film. Sure, each and every one of these sucked harder than a turbine in a wind tunnel, but the fact that the series spawned an expansive empire for even a fleeting amount of time is impressive. Sadly, the low level of quality of these spin offs, along with the incredibly shoddy third entry of the series, killed the momentum. Attempts were made at a resurrection, including the pointless 16 bit fighter found in Double Dragon V: The Shadow Falls (the title continues: All Over Itself Trying To Cash In On The Latest Trend.)

Over time, Double Dragon faded to a pleasant memory; something that retro fans enjoyed but everyone else left behind. Atlus was having no part of that and enlisted Million Inc., S-NEO and Paon to create a proper remake for the Game Boy Advance. Not content to simply rehash the original title, they also worked to add new levels and enemies. Despite a few missteps, Double Dragon Advance was the best entry for the series up until the release of Double Dragon Neon.

The game begins as before. Billy Lee’s girlfriend, Marian, receives a swift and overly vigorous abdominal exam from a member of the Shadow Warriors. In shock from the joy of this unexpected boon, Marian falls over. The Shadow Warriors, realizing that laying on the asphalt will cause the young woman untold amounts of back issues, decide to carry her off to their chiropractic clinic to administer a free posture treatment that is performed by tying the patient up and hanging them from the ceiling. Now, Billy Lee is a skeptic of this line of medical treatment. So, together with his brother Jimmy, he decides to bring Marian back. The Shadow Warriors are staunch defenders of their trade, and have no desire to make it easy.

The actual fighting in the GBA version retains the charm of the original arcade version. All of the moves found there have managed to make their way to the portable version, along with moves that appeared in sequels and home console versions. This added a new level of fun as there were so many different options to ruin the day of the crazy chiropractics. The kicks and punches work just fine, but why settle? It’s so much more fun to knock out the foe with style.

Along with the additional moves, Double Dragon Advance saw the inclusion of new stages. Here, it could be argued, is where this remake falters. The additional stages managed to seem out of place. None of them were bad, per se, but they somehow felt…off. There certainly were some great ideas here. If Bad Dudes can feature a fight on top of a moving truck, then so can Double Dragon. There were also new enemy types added, though none reach the status of Abobo-like iconography. The most memorable of these is the Agent Smith rip off.  The tie straightening animation on this one was spot on. Sadly, none of the other new types really add much to the experience. There are new art assets and cut scenes, too.

Still, the fact that the attempt was made to add on to this classic title is extremely appreciated. The levels of the original are so ubiquitous and classic that gamers can recite them like an old nursery rhyme. The attempts made to add to this might not have been home runs, but they also don’t ruin the experience. In fact, there is a certain amount of joy to be had in picking out the old from the new.

In the end, though, Double Dragon Advance did not manage to bring the series back to the popularity of its heyday. While it was well put together and entertaining, audiences had grown used to more depth and length, even in their portable games. When given the choice between something like Final Fantasy Tactics Advance, which released the same year, and Double Dragon Advance, most chose the title that would give them more time at the stick. Because of this, Double Dragon Advance was woefully ignored and can now be a bit difficult to find in the wild. It tends to be sold for a rather hefty sum from people in the know. Anyone who wants to snag a legitimate copy will either need to pony up the dough or hope that they find a clueless seller. Hopefully, this version will see re-release on Virtual Console or some other marketplace.