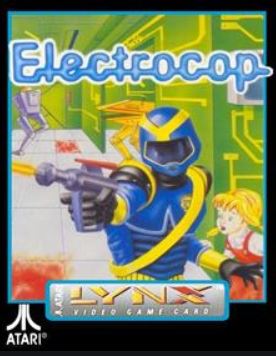 Plagiarism in video games has and will always be a thing, but games in the ’80s took this to impressive heights. Konami was especially famous for this, where one look at the cover of the original Contra will conjure up thoughts of Rambo meets Commando. Not to mention certain enemies having a resemblance to Xenomorph larva and skinless Schwarzenegger cyborgs. There’s other examples but that was the first off topic one that came to mind. Electrocop is a lesser known title, partly due to it being on the less successful Atari Lynx and partly for not being that great. But Pocket Power gives me an excuse to revisit some of the great handheld games of the past and other times to experience such horrific gaming abominations and warn people to stay away from them. Electrocop falls somewhere in between those two extremes.

Released in 1989 for the Atari Lynx, Electrocop seems like a game that would be impressive for its era but also aged about as well a vintage bottle of 1989 milk. I get what the developers are going for, it’s basically like an attempt at the 3D map of the original Doom but instead of a first person shooter perspective it’s a 2D sidescroller, where the player moves up and down through corridors to travel through an actual maze of hallways. Fully 3D game worlds weren’t really a thing in the ’80s so this was a novel approach to gameplay though I’m thankful 3D gaming has evolved to where it is today.

It’s hard to hear Electrocop and not think of Robocop, which this game was released in between the original movie and its first sequel. That’s not enough to convict this game on being Great Value Brand Robocop but when we begin playing the protagonist looks, well, like Robocop. And the first enemies we have the pleasure of dispatching look like ED-209, except ED-209 if OCP ordered them from Wish since they are clearly several sizes smaller than what was expected. 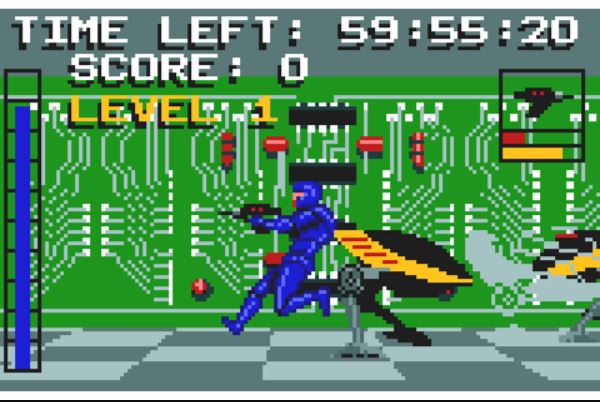 Electrocop takes place in the year 2069. The president’s daughter has been kidnapped and taken to a building where the walls are made of the innards of countless dissected computers. Instead of paying the ransom they send in MegaCorp’s robot cop. The president’s daughter is on the fifth floor but there are something like twelve floors to the complex so it’s a bit of a maze to get to her. The game has an hour time limit, so it’s not like there is any pressure to navigate through this futuristic labyrinth.

Electrocop seems like a typical run n’ gun title of the era except it’s an early attempt at sidescrolling 3D. The player can move left, right, up and down and the enemy sprites change size based on their proximity to the player. This seems like it would have been an impressive graphical feat in 1989 and on a handheld no less. The gameplay is basic and repetitive, however, where the player runs around the maze shooting the enemy robots. There is some weapon variety, but a lot of consists of just adding another laser beam to Electrocop’s gun. The gun fastened to the shoulder is kind of cool but I swear I’ve seen a weapon like that somewhere. The small screen can make combat difficult since there isn’t a lot of space between the time an enemy enters the field of vision and when they are upon Electrocop. Sadly, Electrocop’s weapons are prone to breaking which renders him defenseless, which seems kind of weird since his robot arms look like they would be perfect for performing a vulgar display of power. 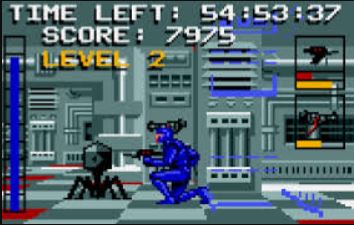 In order to get to the next floor Electrocop needs to enter an access code into a wall-mounted computer terminal. This is actually where the game shows off some good ideas. The access codes can be found in the game or the player can run a hacking program to access the proper code. This can take time so the player can use this opportunity to play some arcade games: Meteors, Letter Puzzle and Out Break. These games are blatant copies of classic arcade games, but by the year 2069 the copyright has expired and they’ve become public domain. There are some other options such as disabling certain enemies, finding information about the enemy robots, healing Electrocop or repairing his weapon.

Electrocop is a game I have mixed opinions about. If I were to imagine myself in 1989 playing this on a handheld I think I would be impressed by it and enjoy it quite a bit. Playing it now, I see what they were going for and think it has some interesting and innovative ideas with it. Unfortunately, these technological flexes don’t carry over to making the game particularly fun to play, especially over thirty years after its release. 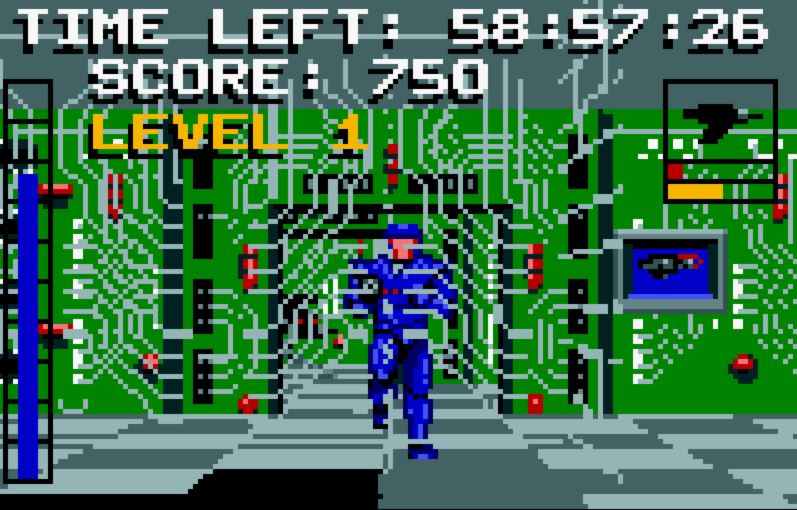 The Atari Lynx was technologically superior to Nintendo Game Boy, and Electrocop is an example of how fun game mechanics trump superior hardware. Electrocop is one of those titles I wanted to like, as it has a cool soundtrack and good graphics for the time but ultimately as easy as it was to find things to be impressed with from a tech standpoint it was equally difficult to get any real enjoyment from the title. Still, if someone has a Lynx lying around and can find this title for a reasonable price it may be worth picking up just to see what was considered an advanced handheld game a few decades ago.