Licensed games are typically terrible. Due to a lower budget and a rush to launch with the release of another part of the property, such as a film, the name of a major movie or TV license on a game usually spells disaster. While we are covering obvious truisms, it should also be pointed out that filling a water balloon with spiders and throwing it at the ceiling is not how one “makes it rain.” Despite the stigma these games have, they still make money. Who doesn’t want to take the controls of their favorite moments from a great property?

TDK Mediactive managed to provide an exception to this “licensed equals garbage” rule with the console release of Robotech: Battlecry.  The cel-shaded graphics and use of the series’ original English voice actors provided a nostalgic trip that was well worth taking. It’s too bad that some of the stages were unfairly difficult, as this would have been one for the ages. 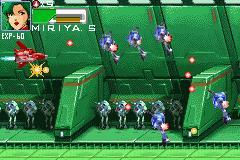 The companion game for Game Boy Advance, Robotech: The Macross Saga, hit shelves less than a month later. Like Battlecry, this little cart retold the events of the original Robotech story arc, lettings players experience most of the major moments. This time though, it was via a side scrolling shooter. While not as graphically impressive nor mechanically deep, this title managed to be more accessible to series and shooter fans alike.

Starting from the initial Zentraedi invasion on Earth, players get to choose from one of their favorite characters, each with thier own strengths and weaknesses and take to the skies. This includes characters who weren’t even present in the story yet, like Dixon and Sterling. Each enemy takes their design directly from the series. The Zentraedi fighters have the tell tale odd bumps and grooves and the walking pods, one of the most iconic “trash” villains this side of Star Wars’ stormtroopers, bristle with futuristic weaponry. 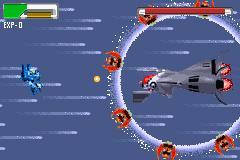 The sprite work is all very well done here. Even on an aging Gameboy Advance SP that could really use its backlight replaced, the colors still manage to pop. The backgrounds show activity without being distracting. While the foes fly in typical “2D shooter” fashion, care was still put into how they animate. While on the subject of animation, the players Veritech transformations look perfect in this space. They are quick, but the “moving parts” can still be glimpsed.

Using these transformations are key to progressing. The jet moves the fastest, and is best for handling the airborne foes, but takes damage when getting too close to the ground. The full robot form, battloid, is perfect for handling the ground based attacks. One just needs to be careful due to its reduced speed. Finally, the valkyrie form mixes the two, providing a midpoint for when enemy groupings are too mixed to separate and handle with the other two forms. Transformations are easily done with a quick press of the right or left shoulder buttons. It’s a good thing, as quick thinking and changing is the difference between progress and death.

To add to the replayability and depth, players can find additional unlockable characters to use and level up. By spending experience points at the end of each level, stats can be improved. It does become possible to turn any character into a Zentraedi wrecking powerhouse that knows no weakness. It is also possible, speaking from personal experience, to lose hours doing just this. 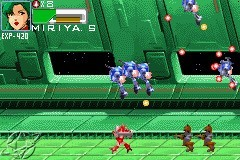 There is one major flaw in this otherwise fantastic shooter. The levels get to be too long. Once a level shows the player what it can do and repeats it by mixing up the patterns, it’s time to move on. Robotech: The Macross Saga’s levels are like a party guest that tells a few good jokes. But then, when the party is over, it kicks up its feet and tells the same joke again over and over. For this player, that was forgiven as it provided ample opportunity to level up and blaze through the skies listening to chip tune renditions of the series’ music. Other gamer’s might want to consider this before jumping in.

Fortunately, even if this turns into a deal breaker, the price for admission these days is low. It is not a terribly uncommon cart, and it was overlooked in its time, overshadowed by the flashier console versions. I managed to find an extra copy for three dollars locally without even trying. Most places that carry GBA games seem to have one handy. Fans of the series and patient shooter fans would be well advised to pick it up. While it’s not a definitive classic, it is a fun time that captures the spirit of the source material.