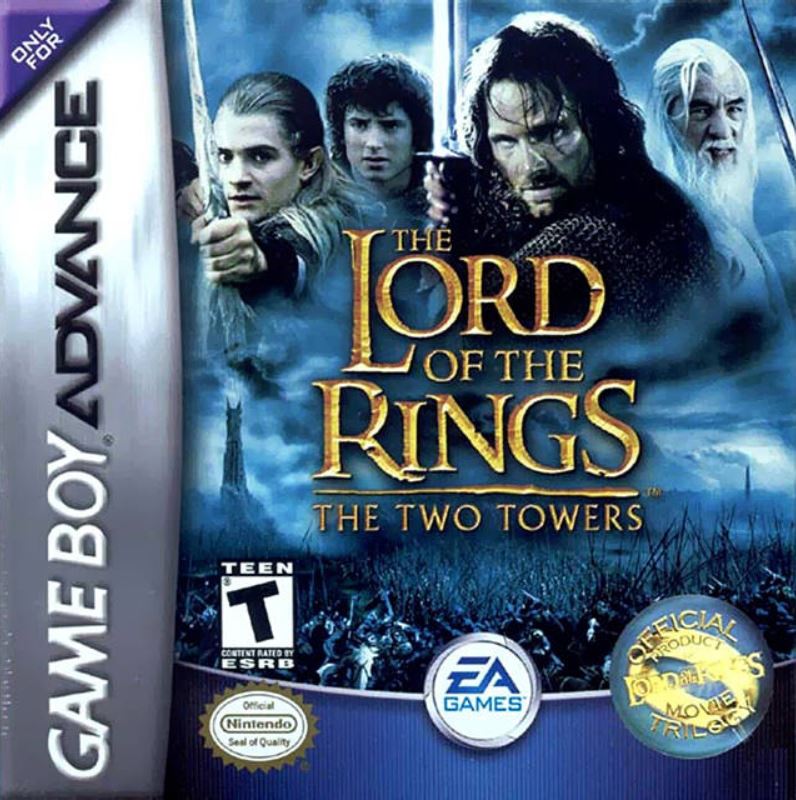 As the wearer of the ring is slowly corrupted by its power until the obsession with the precious is all consuming, the drive for money has a similar effect in the entertainment world. Peter Jackson’s film adaptation of the Lord of the Rings trilogy was a massive commercial and critical success, and as such video game adaptations soon followed. Unlike many other movie to game travesties, the games based on the films were not terrible thinly-veiled cash grabs, but were actually decent. The home console ports got most of the attention, as using film footage as in-game cinematics was a novel idea and a gimmick that enhanced the gameplay experience. But along these releases Game Boy Advance got its own Lord of the Rings games, and while made on a smaller technical scale were still enjoyable games.

The Lord of the Rings: The Two Rowers shares the title of the game released for the non-handheld consoles, but this is an entirely different experience. The title is a slight misnomer, however, as it chronicles the events of The Fellowship of the Ring and The Two Towers. This isometric action RPG allows players to initially control five of the characters from the movies: Aragorn, Eowyn, Frodo, Gandalf and Legolas. Gimli can be unlocked after the player has completed the game in multiplayer mode and is only available to play in multiplayer mode. This seems like an odd unlockable character choice since Gimli did a lot more fighting in the movies than Frodo or Eowyn.

Each character unlocks unique abilities as they level up, which has a level cap of 52. This level cap greatly exceeds what is necessary to complete each character’s playthrough, but is nice for people who enjoy grinding for the sake of maximizing a character build. The phrase Diablo clone was used less frequently during this game’s 2002 release and I don’t recall it being called such, but there are many similarities beyond the hacking monsters to death in an isometric perspective. Each character has branching skill trees that as the player progresses they can level up their character in a way that is best fitting their playstyle with both passive and active skills. Aragorn can’t use bows but can gain access to ranged attacks with a skill that allows him to throw his sword. Legolas has a meditation skill that lets him recover health by standing still. There are a few different ways to approach each character, so experimentation adds reason to give the game multiple playthroughs. 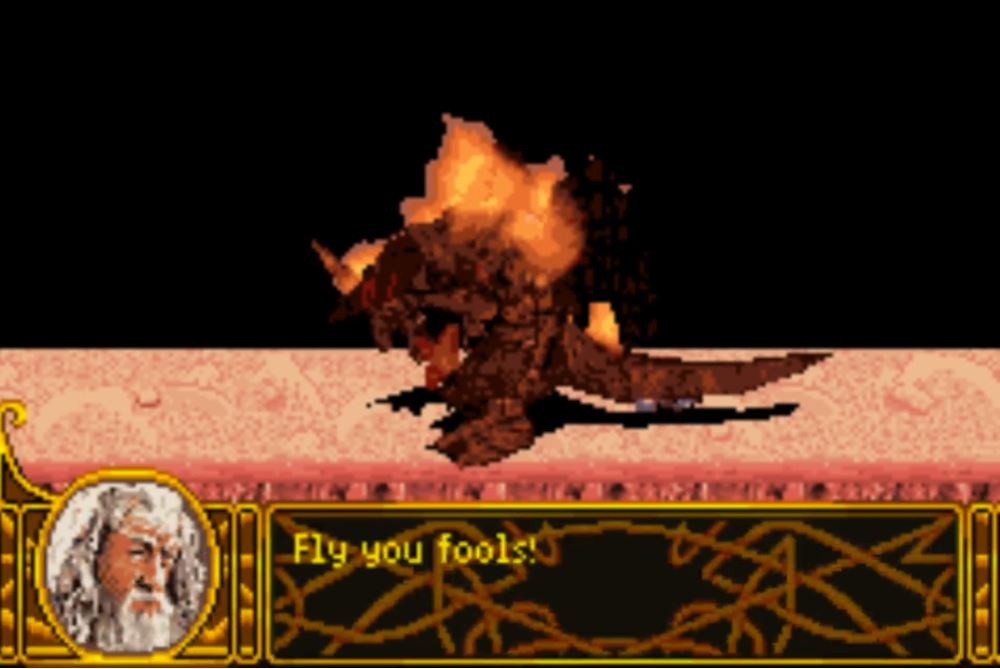 One of the things The Two Towers attempts to do successfully is recreate the experience of the first two movies. This is not without its caveats, as the Game Boy Advance hardware doesn’t recreate the cinematic splendor of Middle Earth or the epic scale of the battle of Helm’s Deep. But reliving those moments and others such as the mines of Moria is still enjoyable on the small screen. This is helped because the game stays true to the film’s multiple concurrent storylines when the Fellowship is separated. Replaying the game as different characters is necessary to experience everything the title has to offer as certain levels and dialogue are naturally not available to every character.

As someone who is generally mistrusting of games based on movies largely due to some of the things we saw in the NES era, The Lord of the Rings games tend to avoid my exaggerated negative stereotype of such things. The handheld version of The Lord of the Rings: The Two Towers lacked the level of technical impressiveness of the home console version, but for handheld expectations of the time, it was a great portable action RPG. The Lord of the Rings license is what put this title on people’s radar but the game mechanics were solid enough where this would still have been a fun game even if it was just its own unknown IP. Having multiple characters to experience a different progression of the game encouraged multiple playthroughs, and while this is far from the first title to have unique character builds with leveling up, the system is executed well enough where planning character builds was part of the fun. Of course, battling armies of uruk-hai, trolls and Nazghul made the experience better, and even on the small screen taking on Sauron’s army while defending Helm’s Deep is going to be a climatic showdown on any platform. 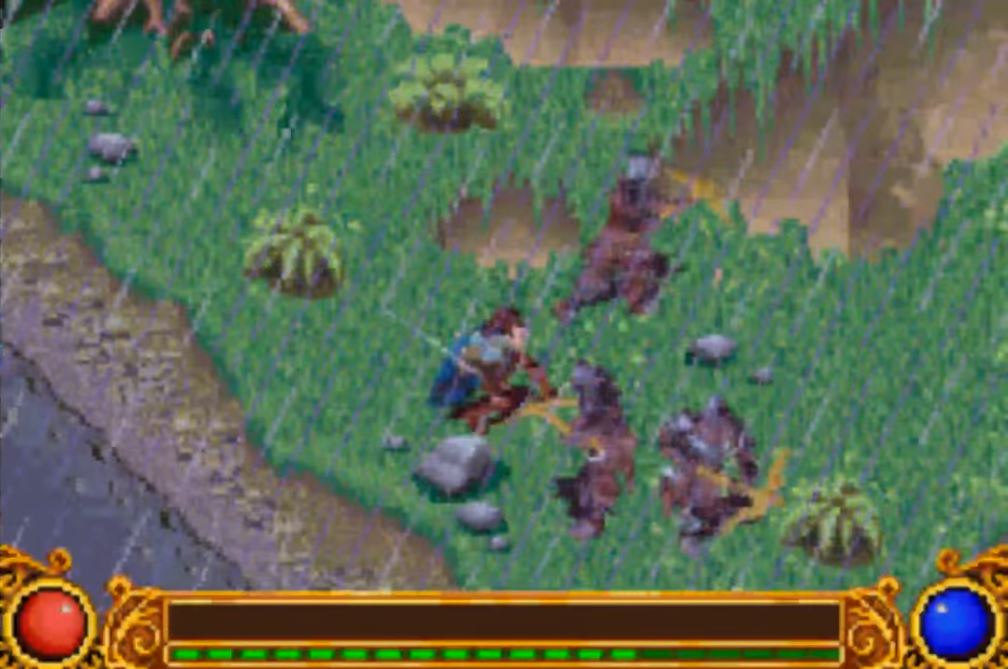 The Lord of the Rings: The Two Towers is one of several good games based on the film trilogy. Due to hardware limitations instead of getting an unsatisfactory handheld port of the console version of Two Towers, we ended up with two distinctly different Two Towers games. The 16-bit aesthetic gave the title a slight retro feel even at the time of the release, but that ultimately led to it feeling like a companion title to both the movie and the Gamecube/PS2/Xbox Two Towers game. But comparisons to its big brother aside, this is a solid action RPG in its own right and should be experienced by any Lord of the Rings fan.