After taking a year off, Ubisoft has brought their crown jewel back just in time for holiday 2017. With an extra year of development time, Ubisoft Montreal has managed to make some major changes to the ninth mainline entry in the franchise. From gameplay to leveling up to Eagle Vision, Assassin’s Creed Origins is a different beast from any of its predecessors.

With eager assassins wanting to jump into the action on October 27, here are some things to think about before you trek into the sands of Egypt. Some of them may save your Bayek’s life. 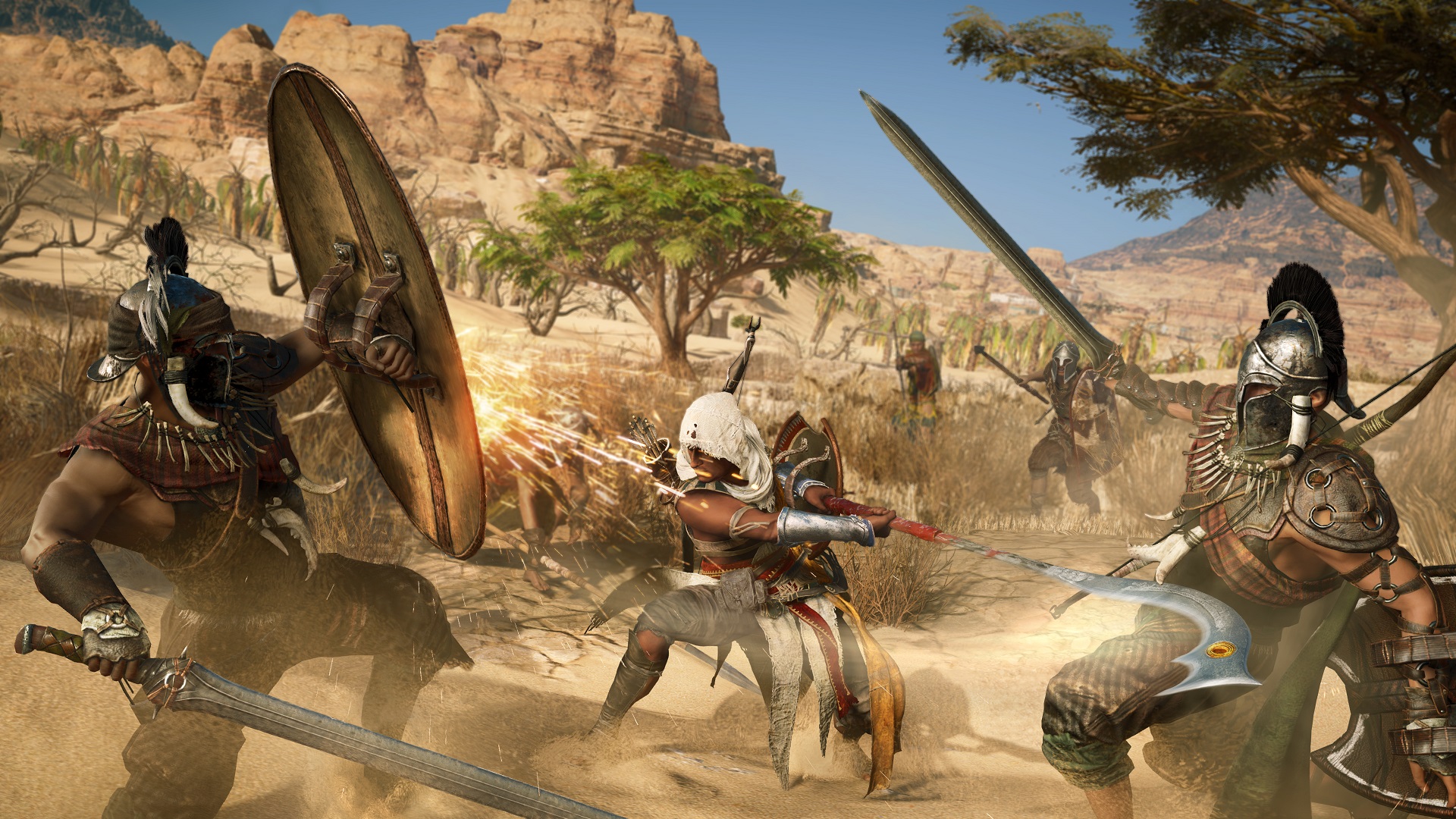 Assassin’s Creed’s gameplay has gone through a metamorphosis for Origins. Past games were about watching enemy attacks and successfully countering them. It looked cool but required little player input. For Assassin’s Creed Origins, Ubisoft Montreal has adopted a Dark Souls approach to combat. Enemies no longer wait their turn to attack and you can’t get an instant kill with a counter.

Players can now lock onto enemies by hitting R3 and can swap between targets by tilting the Right Stick. Light attacks are assigned to R1/RB, heavy attacks to R2/RT and blocking to L1/LB. To be successful in combat, players need to be aware of their surroundings, keep enemies in sight, and make careful use of the dodge button. Bayek gets three dodges in a row before he has to recover and are best saved to avoid enemy attacks. Watch their weapons, for when they glow orange, they’re about to attack. At this point you need to get out of the way.

Note: You can’t use your shield when short knives are equipped, but Bayek will deflect some blows with the left-hand knife. 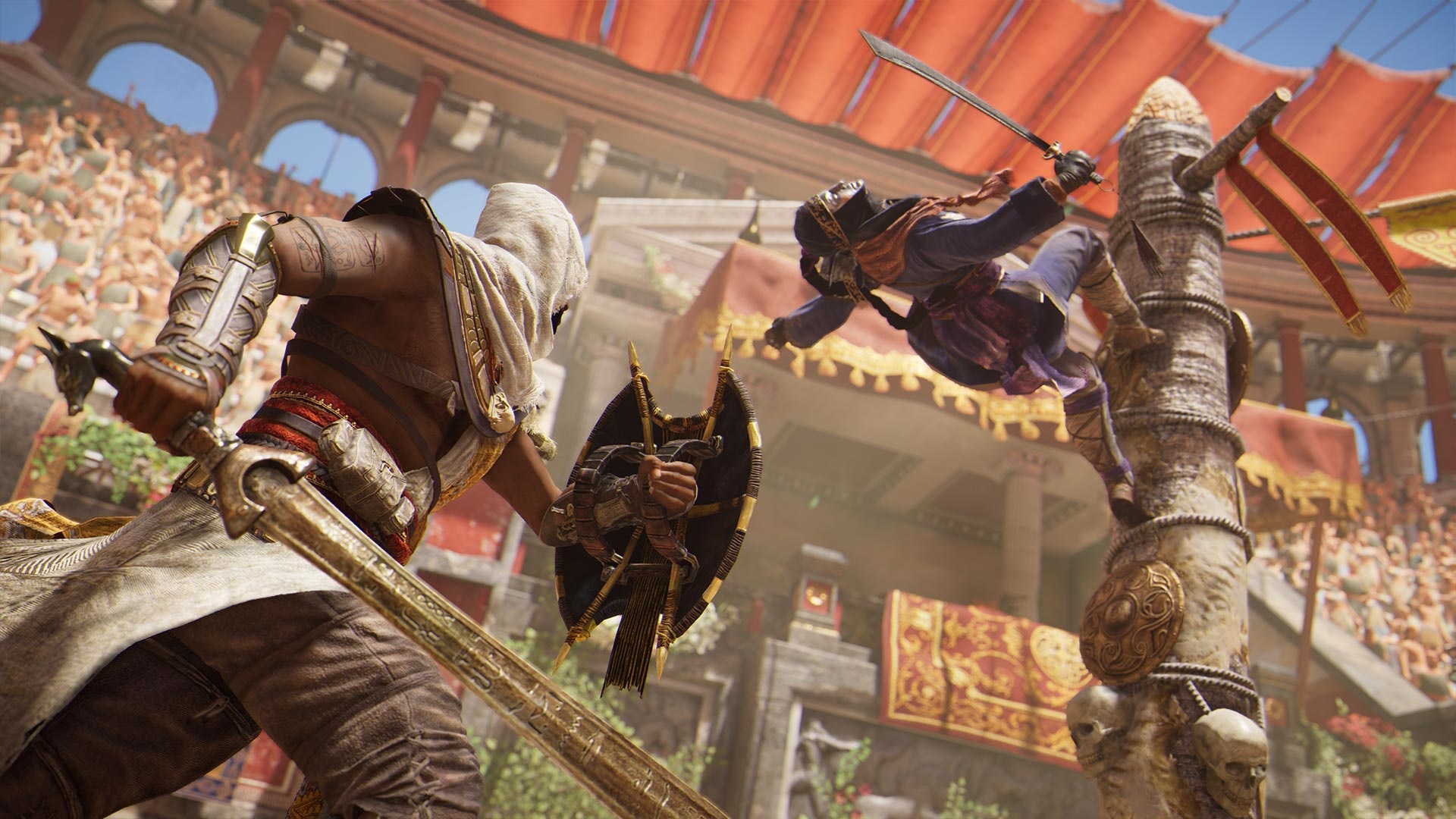 RNG loot has finally made its way into the Assassin’s Creed franchise. While exploring Egypt, players will be able to collect a wide assortment of melee weapons, bows, gear, shields, and mounts that come in a variety of rarities based on color:

There is an in-game store in Assassin’s Creed Origins to buy Loot Boxes. Much like Shadow of War, it’s disgusting that a single player game has them, but Origins doesn’t force them down player’s throats. To be honest, it’s quite easy to acquire better items as you progress through the game. Origins is quite good at rewarding players.

Now, when you get a new weapon or bow you can sell them for gold, or you can dismantle them for crafting parts. Crafting permanent items can increase your melee damage and health, making dismantling an excellent idea. Though crafting parts are littered throughout the world, dismantling is much faster than searching. Here’s the type of materials you can get through dismantling:

Rarer ores drop based on the rarity of the item dismantled. Ore, along with wood and leather (found in the wild) is used to upgrade permanent items, such as the breastplate and hidden blade. 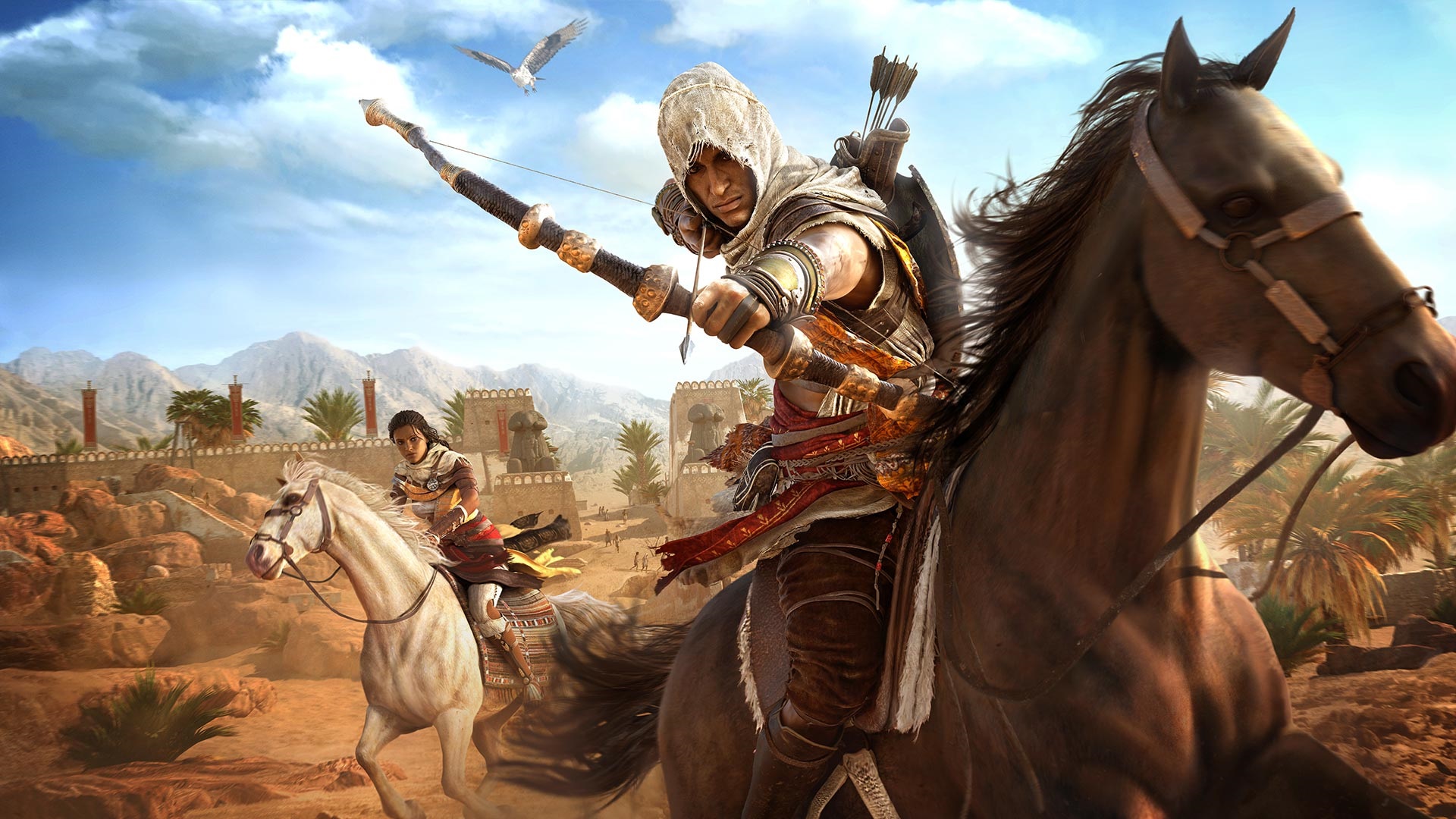 A guide to bows 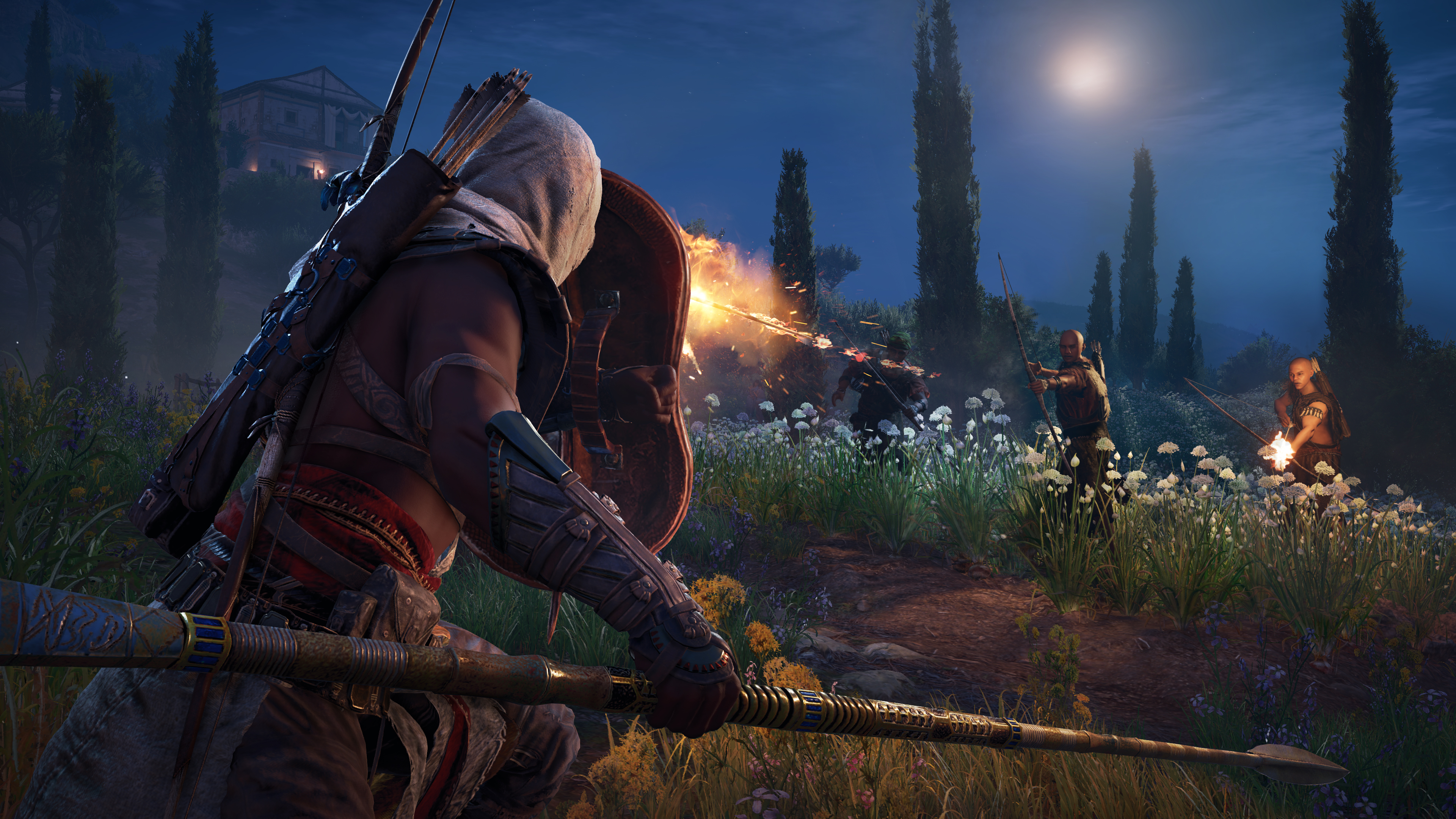 Melee weapons and bows are your primary tools to defeat enemies. As we’ve discussed, different melee weapons and bows cater to different playstyles, but sometimes it’s best to carry weaponry that’ll help you in all situations. Wouldn’t it be great to have a sword that can deal loads of damage to a single opponent, but then switch to a spear when surrounded for crowd control? Well, you can do that.

It is best to invest your Ability Points early in the Bow Bearer and Weapon Bearer abilities, which can be found in the Hunter and Warrior paths respectively. Doing this unlocks an additional slot for a bow and melee weapon, giving you flexibility in how you approach fights. 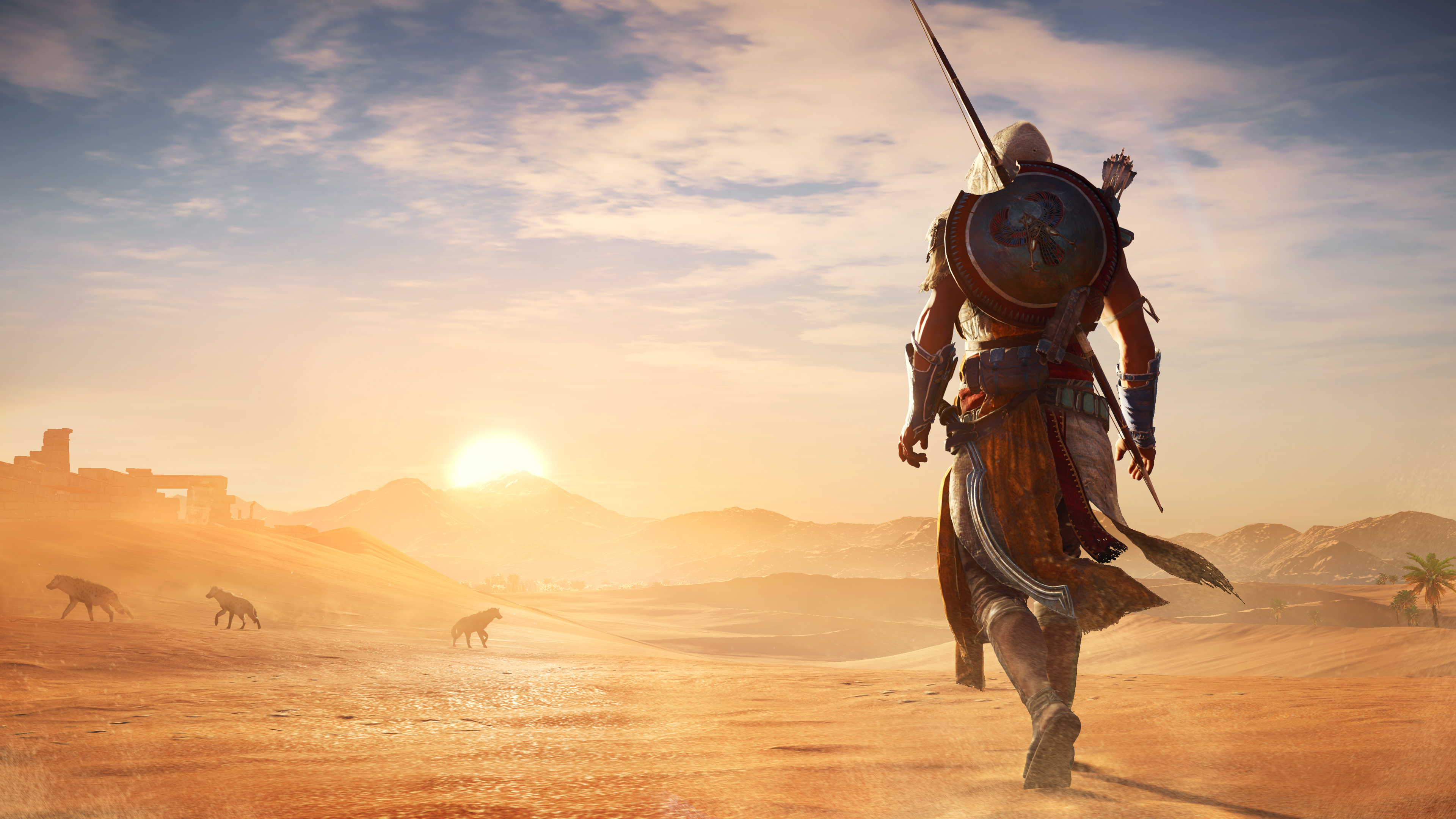 Don’t pass up an opportunity to hunt

Like every other Ubisoft game, Assassin’s Creed Origins allows players to hunt various animals throughout the environment. While some drop rare items that can be sold for a shiny penny (i.e., Hyena ears, vulture skulls, etc.), they may also drop leathers needed for crafting.

You’ll need these leathers to improve your gauntlets and breastplate. Animals are plentiful, but you’ll need to call Senu to locate the animals continuously. Unfortunately, you can’t just mark the locations on the map. 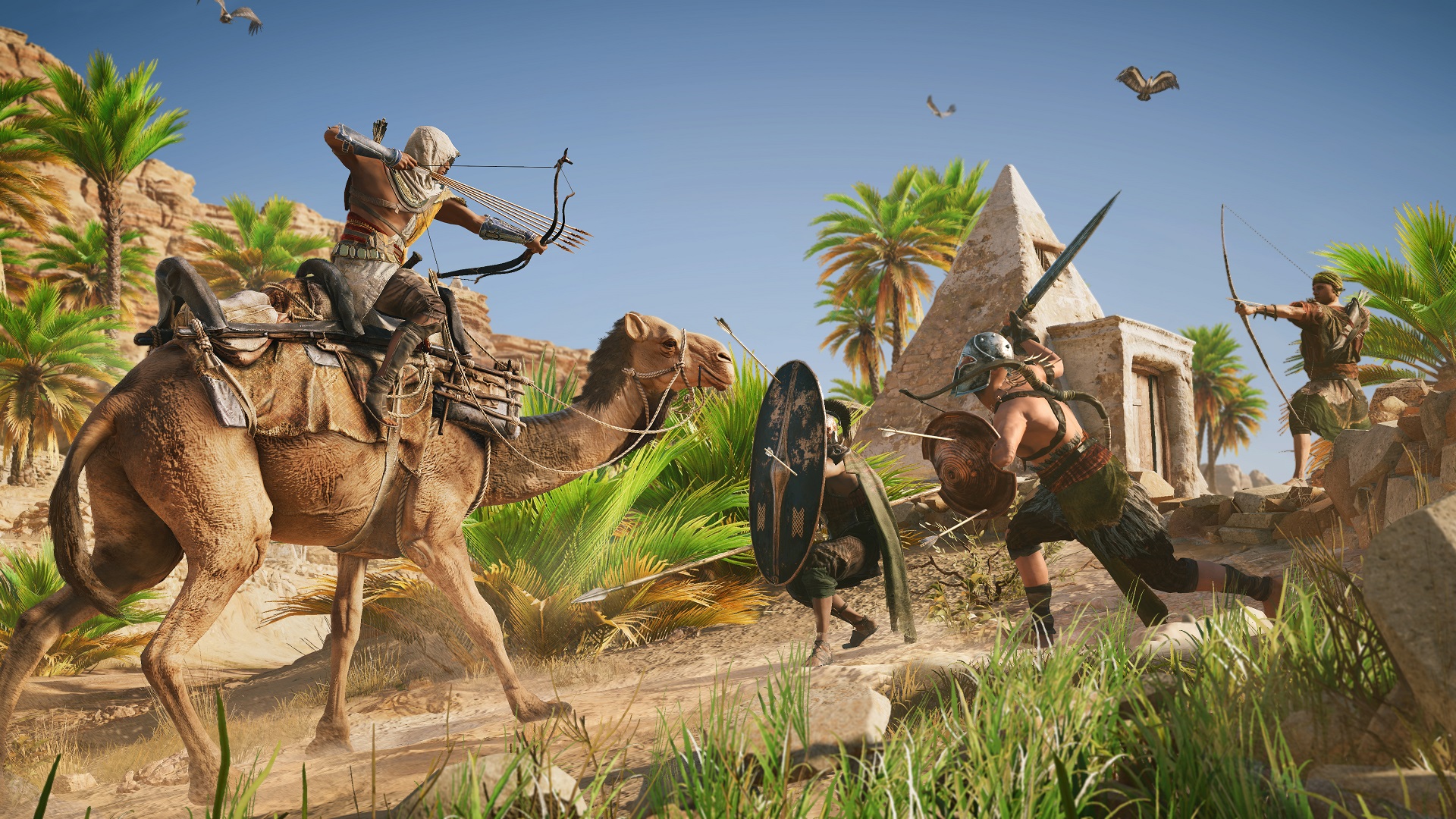 When surrounded, mount a horse

It’s easy to get in over your head in Assassin’s Creed Origins. Whether its enemies or a pack of hungry lions, there will no doubt be a time where you find yourself surrounded and overwhelmed. In that case, mounting your horse could mean the difference between life and death.

Calling your horse (or camel if you prefer) can be quickly summoned by holding down the down button on the d-pad. Once mounted, you can either enter mounted combat or flee. If you choose to battle, you’ll be able to quickly dodge and weave around enemies all while slicing them apart. It’s a fast way regain control of the crowd, just be wary of archers. For those that flee, always be wary of mounted enemies as they will chase after you.

Do note, it is possible to get knocked off your mount, so do be careful when engaging. 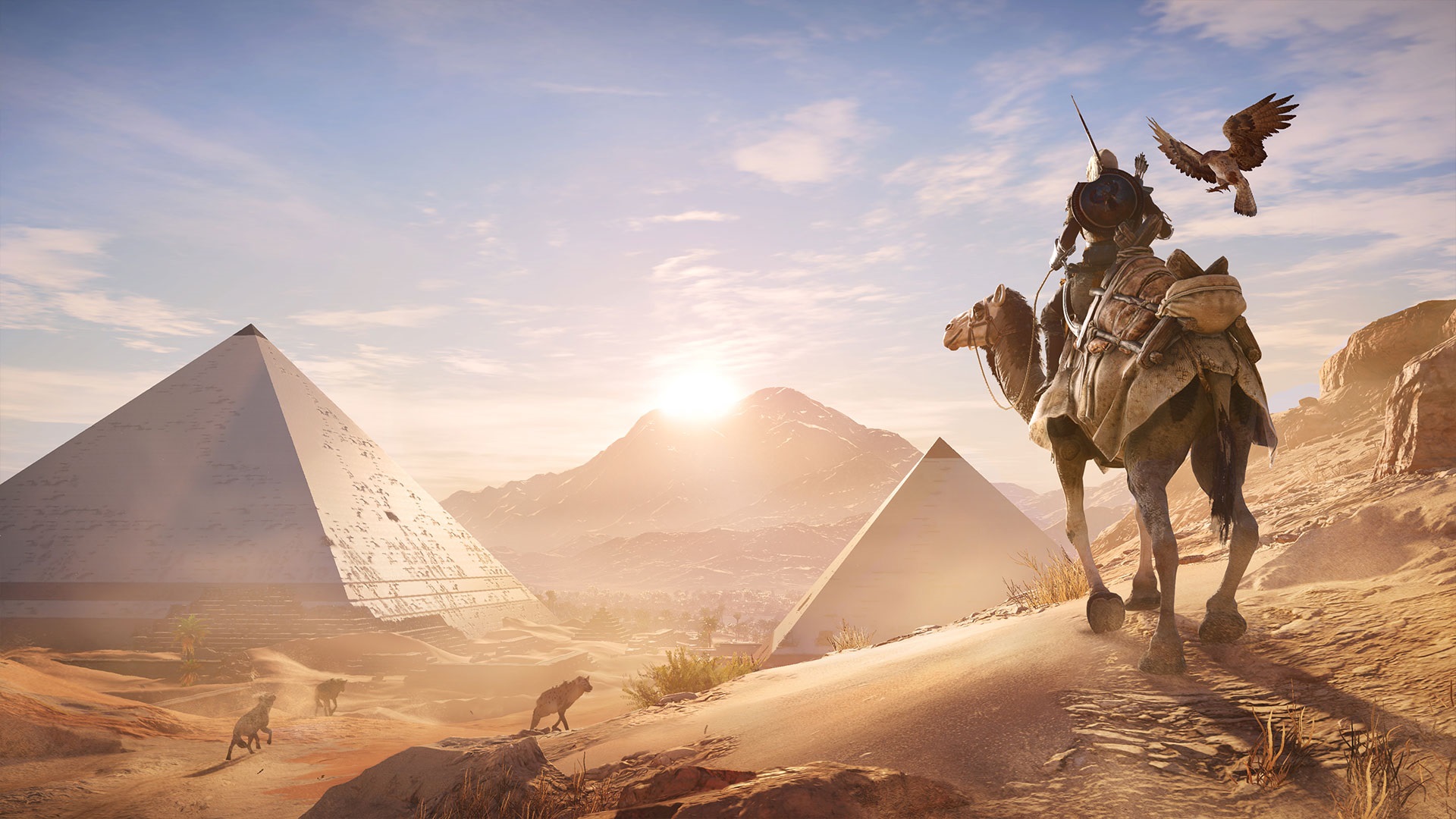 Senu, your eagle companion, replaces Eagle Vision from previous Assassin’s Creed games. While Eagle Vision has always been a powerful tool for locating the objective and tagging enemies, Senu requires a bit more skill. Players will need to maneuver him to identify and tag enemies. At first, Senu’s ability to sense enemies and extras on the map may seem limited, but there is a way to make it better.

Senu’s perception increases with every viewpoint you synchronize. Doing so enhances his ability to tag enemies, locate points of interest and highlight treasure. The more you get, the more useful Senu becomes. 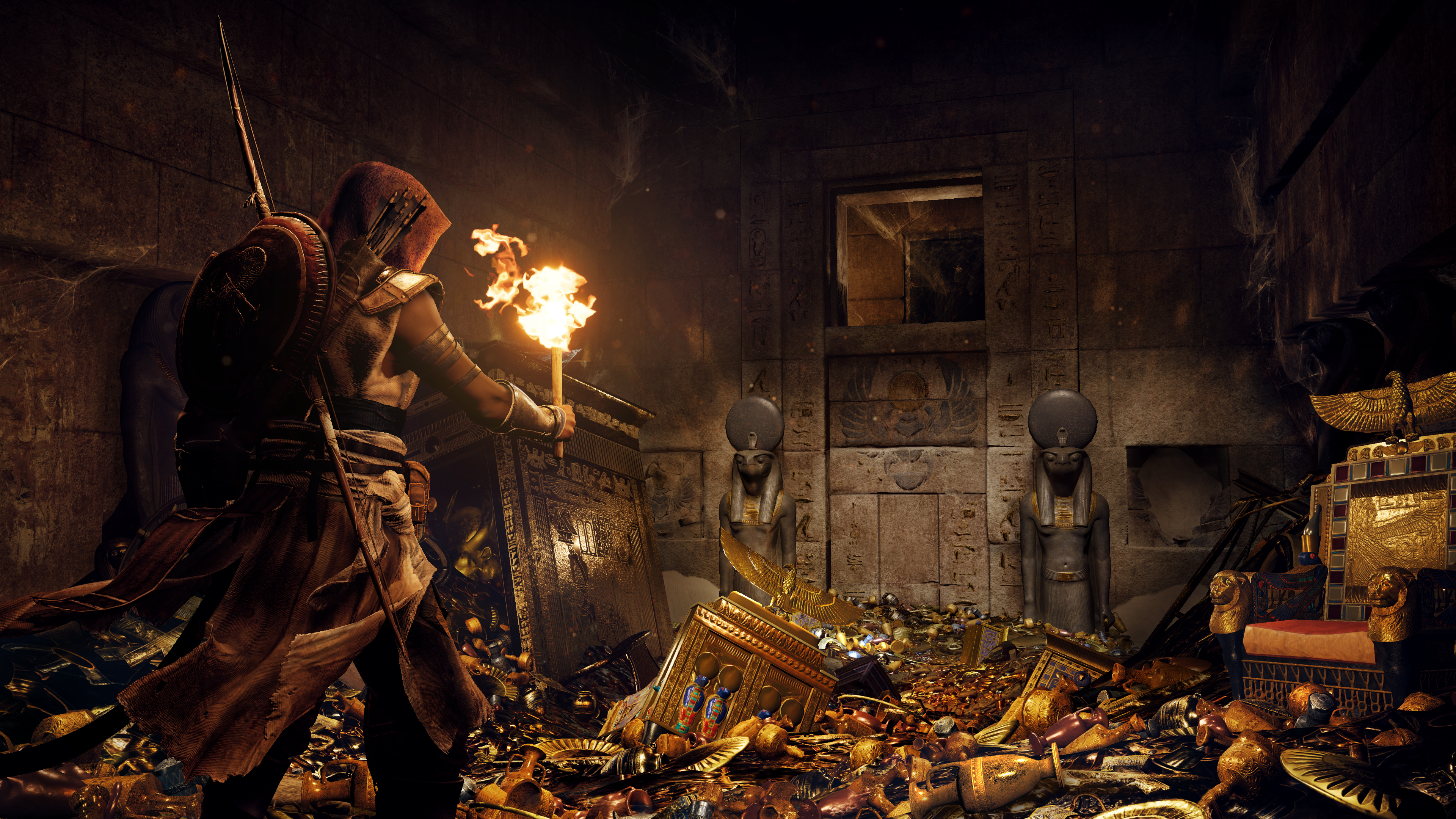 Ignore the microtransactions, you don’t need them

We’ve already stated this, but it’s worth repeating. Microtransactions in Assassin’s Creed Origins are completely pointless. It’s easy to acquire powerful weaponry by playing the game and exploring the world.

They aren’t needed, don’t belong in the game and you should keep your hard-earned money.

Assassin’s Creed Origins is available October 27 on PS4, Xbox One, and PC. For more important Assassin Creed Origins tips, head over here and be sure to check out our review.