There’s a bug screaming down the track and it won’t stop for anything.  Sharp curves, thorns, barriers and nightmare bosses that distort the course into deadly shapes will all be left in its dust, shattered by the pounding shockwaves it sends flying up the course.  Thumper is a music-based game that’s a clear illustration that violence isn’t as much about recognizably human application of excessive force at it is about tone, with every action in the game feeling much more intense than could reasonably be expected.  Once you’ve learned its systems, that the thump on a lit square in the track lets you get air time, that hitting a sharp curve with perfect timing resets the clock on how you long you can stay aloft and that there’s a nice bonus for slamming back down on the next lit tile coming up, the game changes from “hanging on for dear life” into “learning the rhythm for maximum scoring”.  And then it gets faster and more complicated, and maximum scoring gives way to hanging on for dear life again.  It’s an incredible game and a personal favorite, to the point that I picked up both Switch (standard) and PS4 (Collector’s) when it went on sale from Limited Run Games.  This unboxing is that latter edition and it’s a fantastic bundle of Thumper-related goodies.

The outside box has all the art given the metallic foil treatment, with embossing on all four sides.  The packaging has a clean, unified look without a bit of unnecessary branding, making for a sharp-looking box free from the distraction of a PS4 banner running through the design. 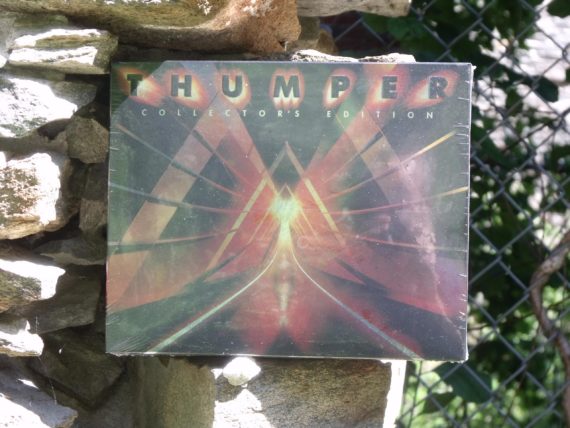 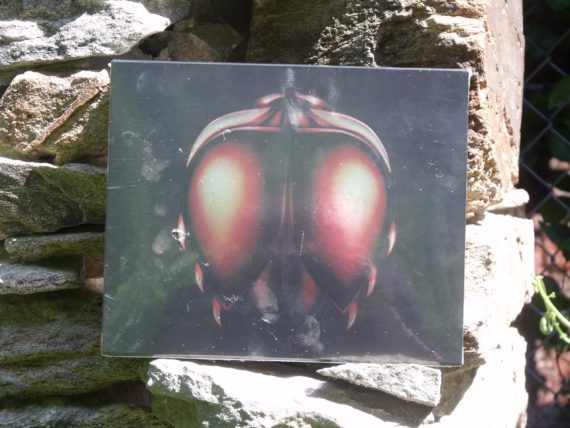 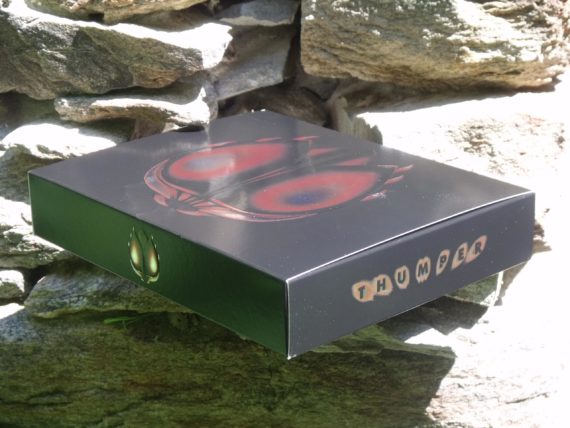 Popping off the plastic wrap (which, whoops, got a bit dinged against the stone wall) and looking inside reveals the soundtrack on top, game below and the rest of the insides buried beneath or inside the cardboard struts holding everything in place.  The soundtrack is complete, the same ten tracks you’d get in any other version, over forty minutes of ominous traveling energy for when the most terrifying thing in a nightmare descent into hell is the person taking the journey. 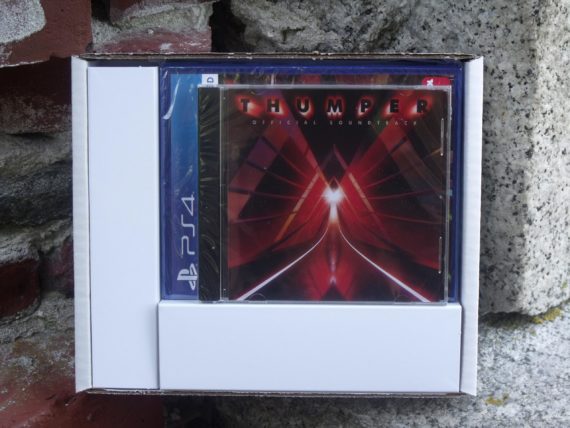 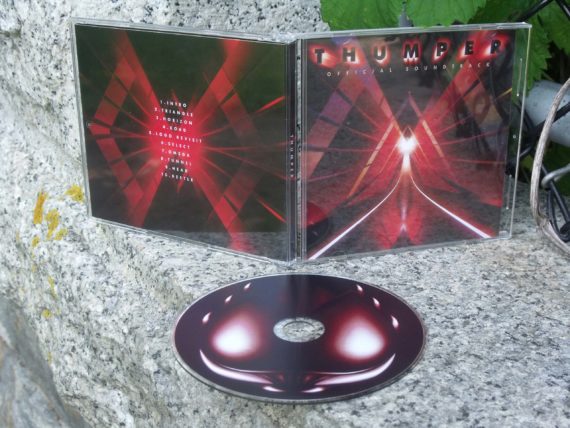 The next item down is the game, and while its standard packaging is nothing special, the manual is simply one of the best around.  Every page is like it’s own little album cover, not so much explaining the game as illustrating it, with the information integrated with the art.  The only down-side is it’s a mere sixteen pages, but seeing as Thumper really isn’t that difficult a game to explain it would have been hard to justify more. 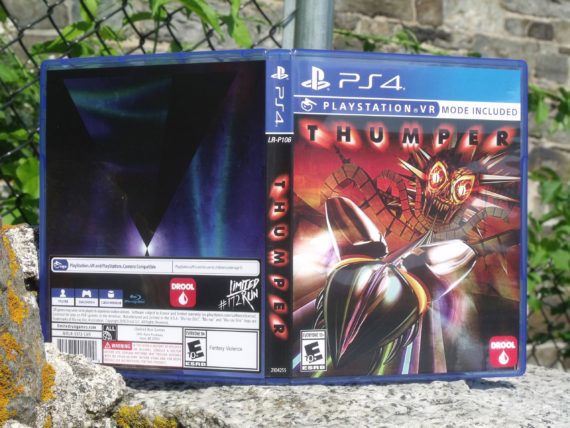 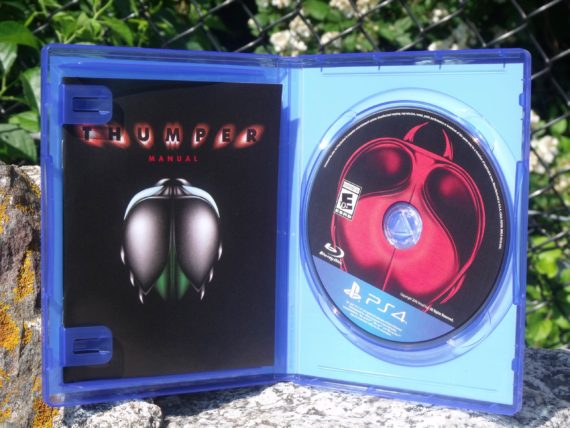 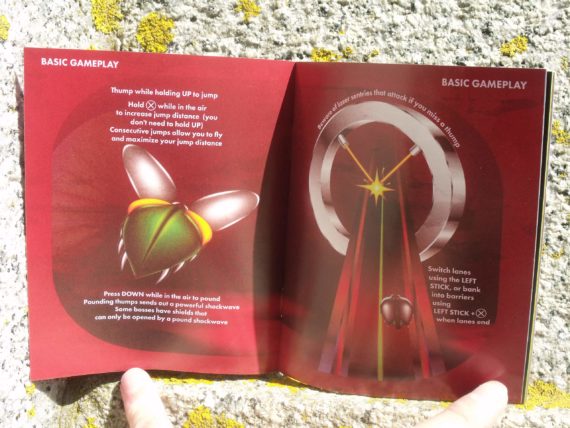 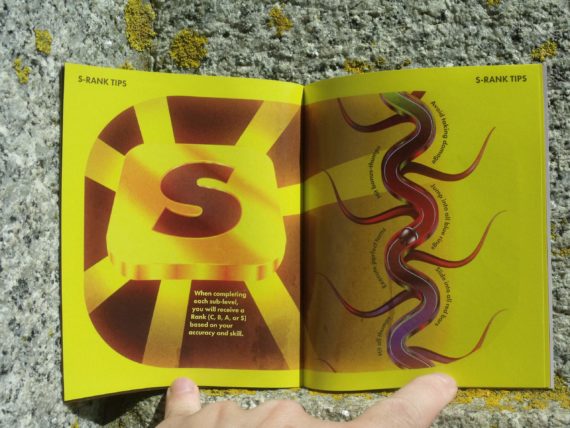 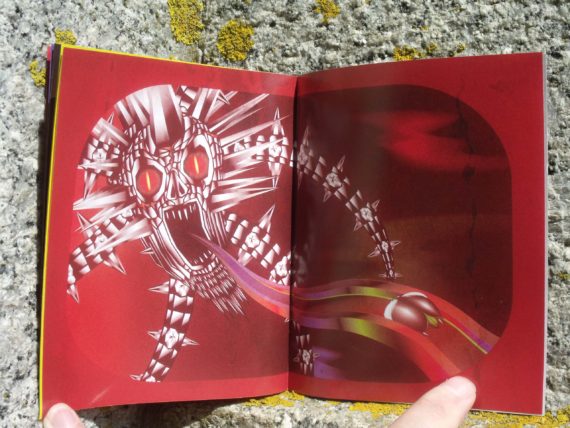 Nestled inside one of the carboard struts is the Thumper beetle pin, which is a nice, solid chunk of metal.  While there’s not a lot to say about it (pin, metal, beetle, awesome, done) I will say this is my favorite picture of this entire series and I’m slightly concerned I won’t be able to top it. 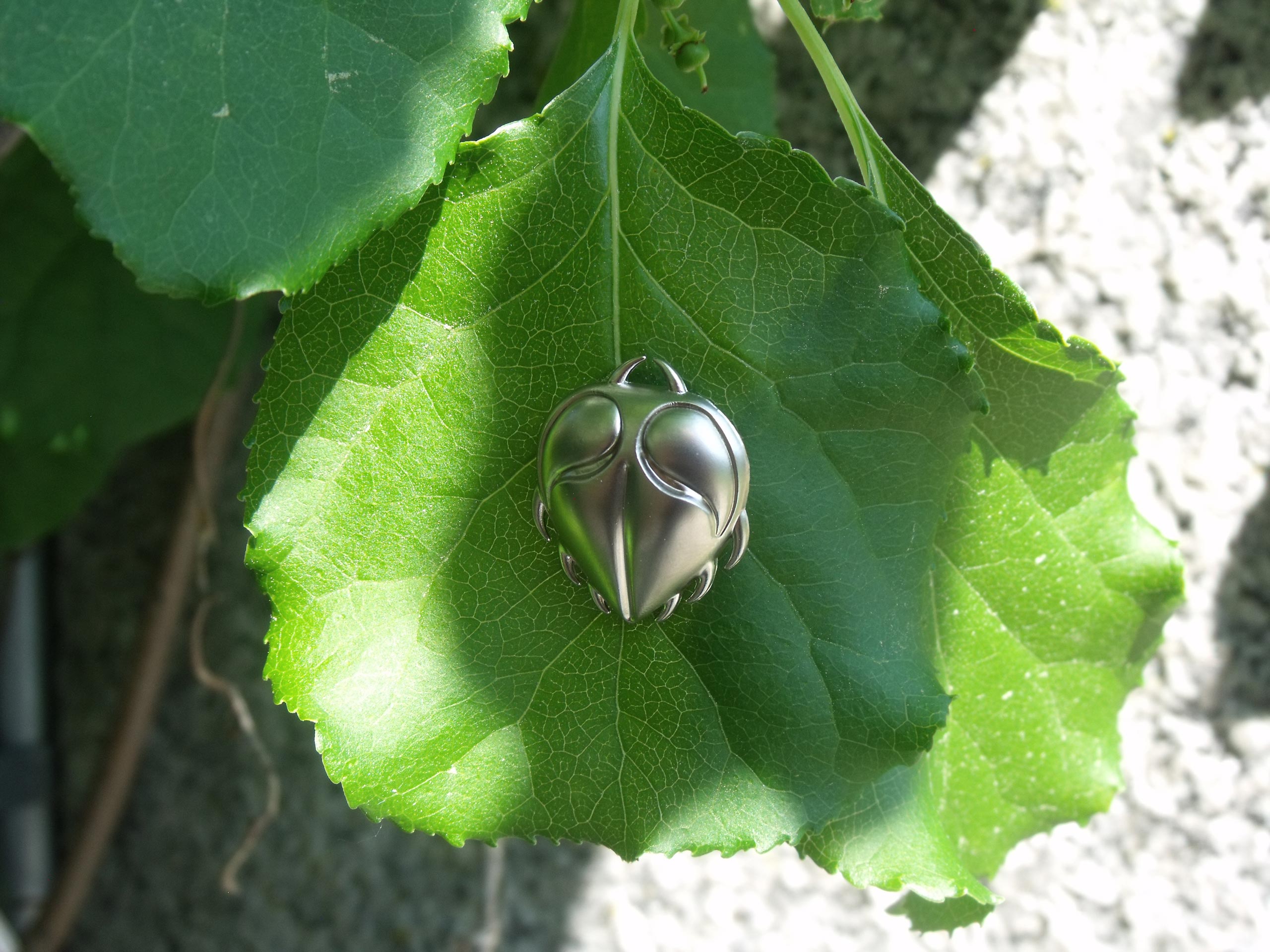 Nearing the bottom of the box is a sleeve holding three art cards, perfect for framing and lightly creeping out those who have no idea what a Thumper is.  They come in a nice cardboard sleeve illustrated with an abstract but thematically-fitting design that’s close to, but not the same as, the converging walls of the tunnel on the cover of the soundtrack. 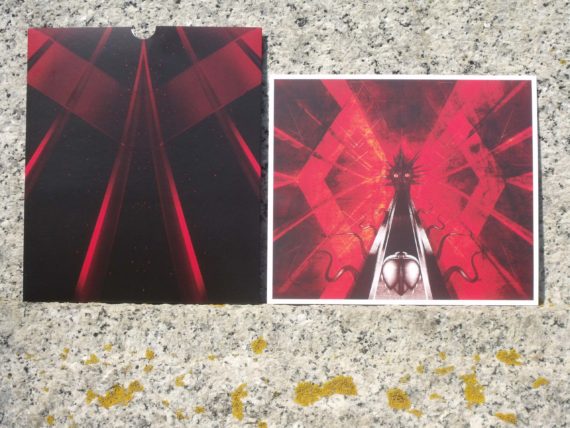 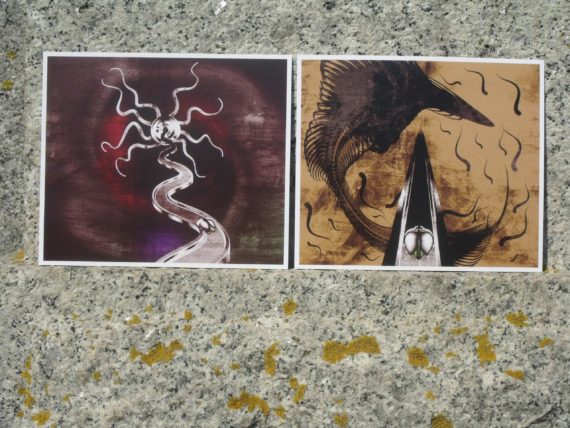 Underneath the cards at the very bottom is a double-sided poster, one side being the beetle facing off against its spiky-headed nemesis, and the other a somewhat more peaceful journey into the purple neon track. 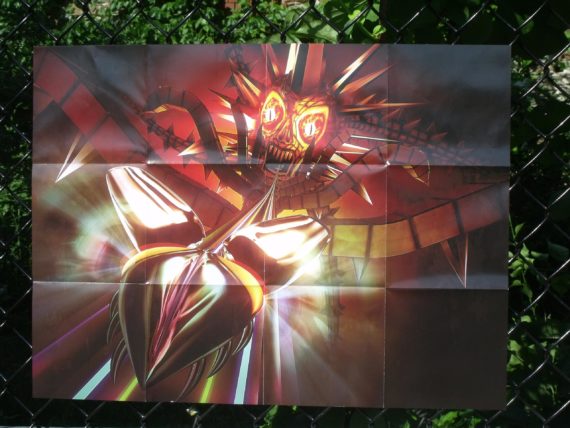 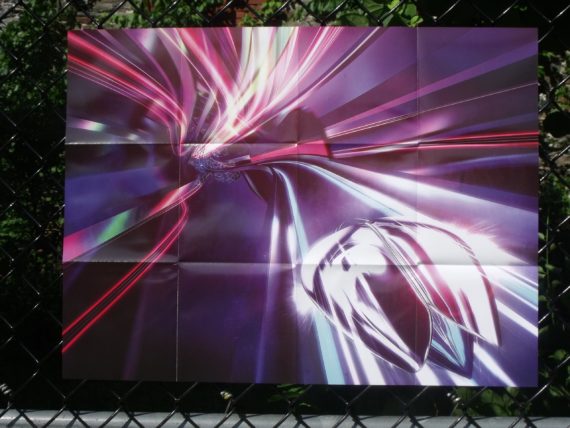 Finally in the middle of the box is the Steelbook, perfect for those wanting something a bit fancier for the shelf than the standard box and can’t quite figure out how to display the entire Collector’s Edition case.  Krakhed on the front, the same beetle design as on the back of the cardboard box on the reverse, and the inside art is the track stretching away into forever.  I particularly like how on the inside Krakhed’s embossing makes his image pop out like an angry inverse ghost. 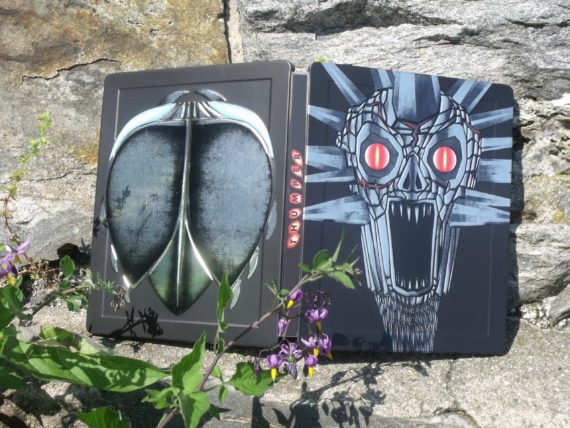 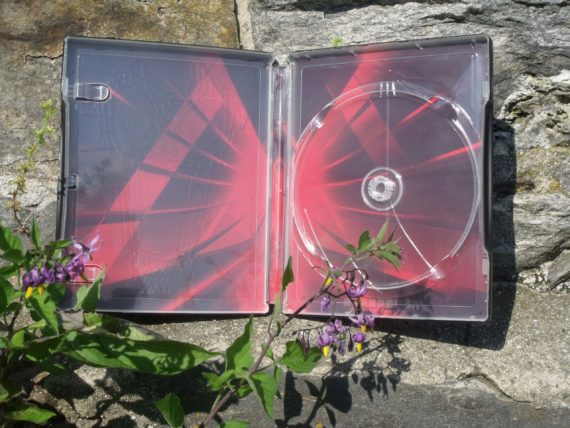 Thumper is a phenomenal game, one I was more than happy to spring for the extra-fancy version of.  Limited Run Games generally has at least one special edition in its weekly releases, with the contents ranging from “a few extras” to “everything that can fit into a light-up box”.  Thumper is about standard for the company’s Collector’s editions, with the results being a strong box of goodies that can sit proudly on any fan’s shelf.  About the only thing that could have made it better is a Hot Wheels-style beetle and plastic track, but wishful thinking only goes so far.