It’s hard to believe that it’s already been nearly fours years since the Xbox One released and Microsoft is marking the occasion by releasing a updated version of the console. One of the biggest issues with consoles — especially the last few generations — was that PC would rapidly surpass them in sheer power, making it difficult to continue releasing technologically-advanced titles on the console without sacrificing. To curb this issue, both Microsoft and Sony decided to release updated hardware just about halfway through their console’s lifespan. The Xbox One X isn’t going to replace the Xbox One, but simply be an option for those who want to play their games with current technology instead of 2013 technology. Microsoft was kind enough to provide us with an Xbox One X unit a few weeks prior to launch and we decided to photograph the unboxing process to give you a better idea of what to expect come November 7. We’ll be posting our opinion of how the console performs on Friday, so stay tuned. 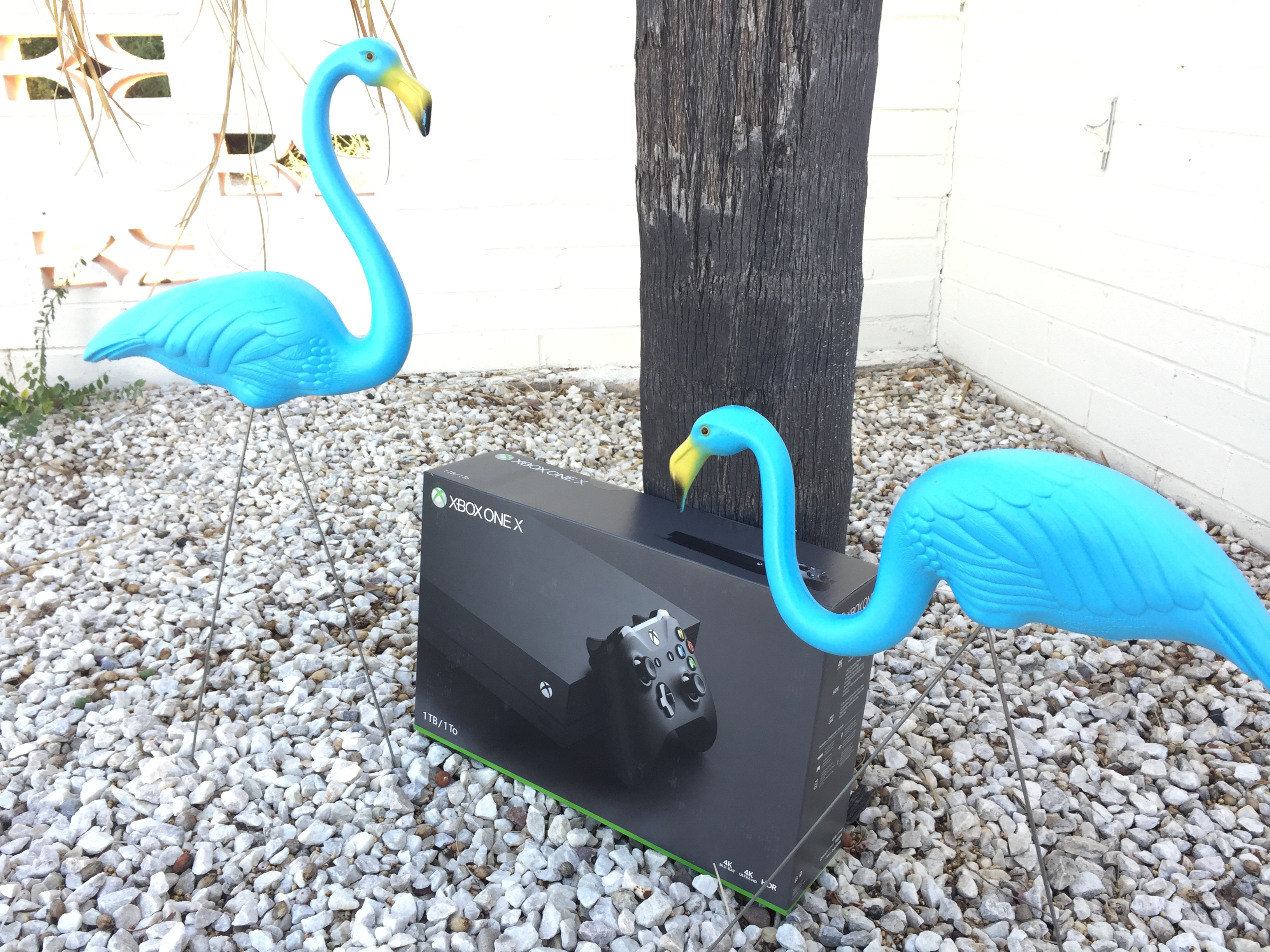 With a trimmer case and no Kinect or power brick, the Xbox One X’s packaging is decidedly smaller than that of the original Xbox One and about the same size as the Xbox One S. The front of our Xbox One X box had some scuffs on it out of the package it was shipped in (and not from placing it on rocks next to a tree, as I’m sure you’re thinking), but it’s likely this was just caused from being shaken around a bit during shipping and not a standard issue with the box itself. 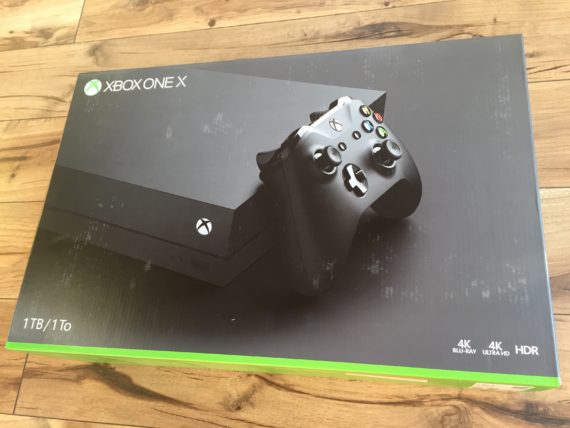 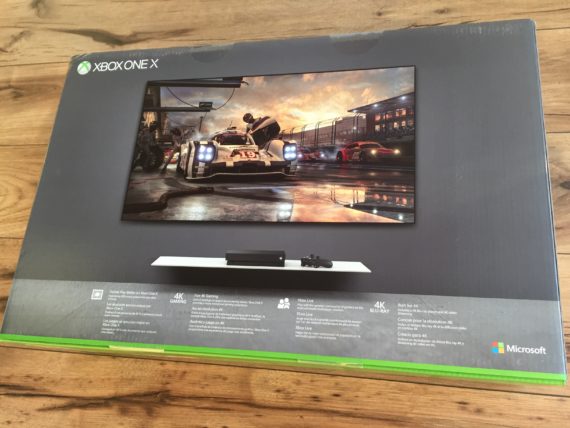 The sides and back of the Xbox One X packaging advertise what’s inside and some of the most prominent features of the console, including its 1TB HDD, 4K/HDR capabilities and of course 6 of those teraflops. 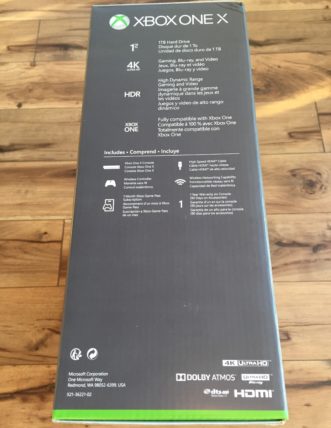 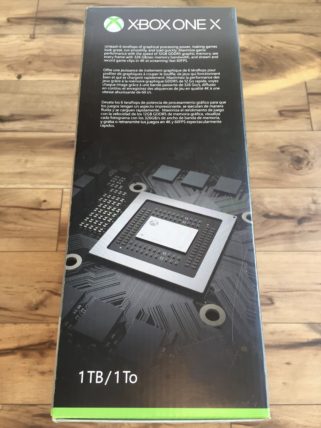 And here we go! Opening the box reveals the innards including quick start instructions and Xbox Game Pass and Xbox Live Gold trial vouchers ensuring everybody will be connected from the start. 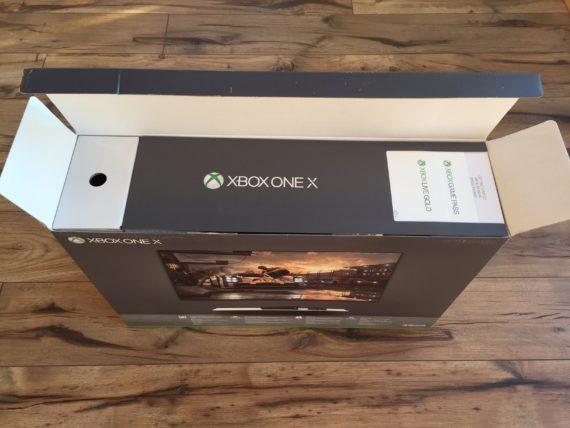 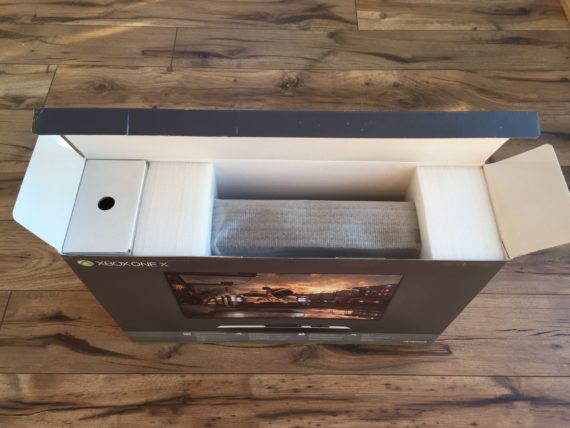 The white box on the far left houses the controller, power cord and HDMI cable. 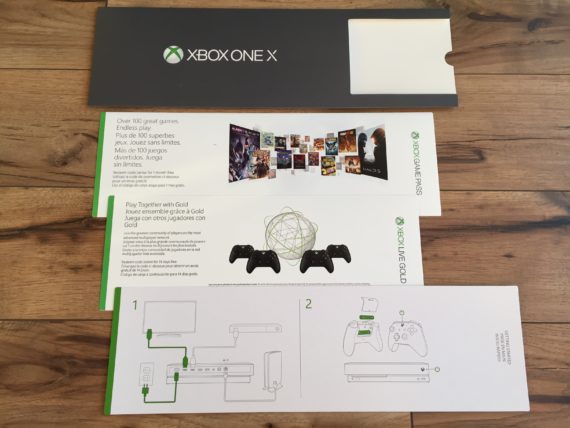 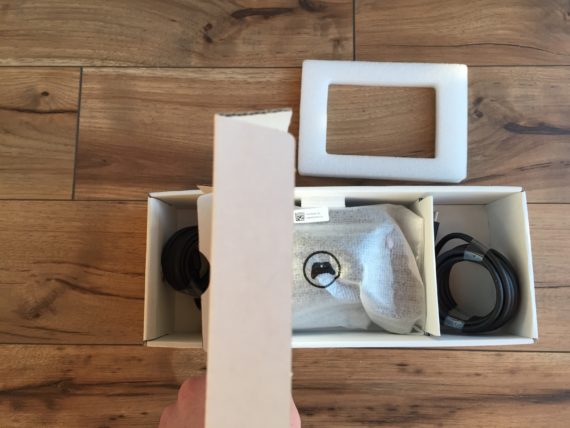 The HDMI cord is comparable with the one included with past Xbox One consoles, the controller is the updated Xbox One S version (more on that in our review) and the AC cord is free of the power brick from the original Xbox One. 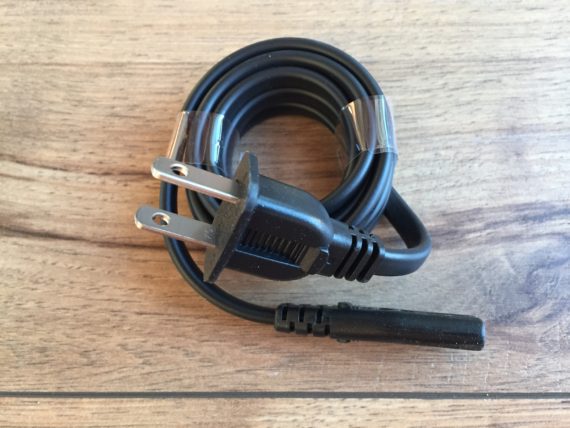 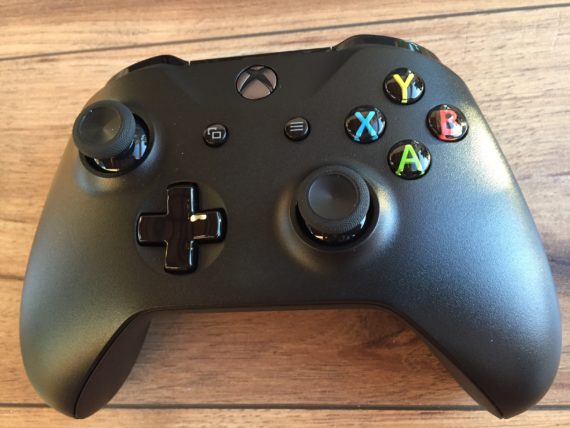 And here it is: the Xbox One X itself. Lacking the aforementioned power brick, it’s hefty even with its small form factor. The front is simple and it says a lot when the warning sticker is perhaps its most immediate feature. The back of the console features an AC port, HDMI Out and HDMI In port, Two USB ports, an IR out port, Ethernet port as well as a small sticker giving necessary info about the hardware, including its manufacture date. 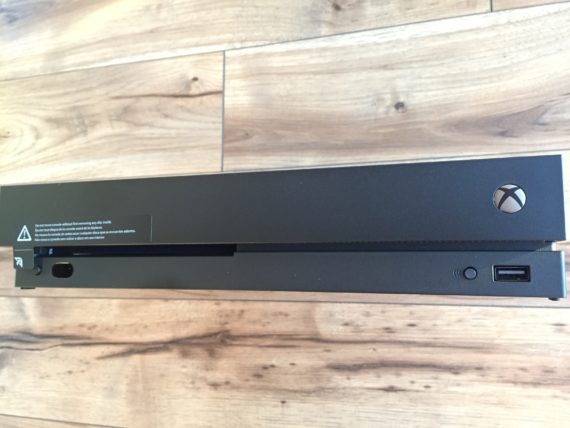 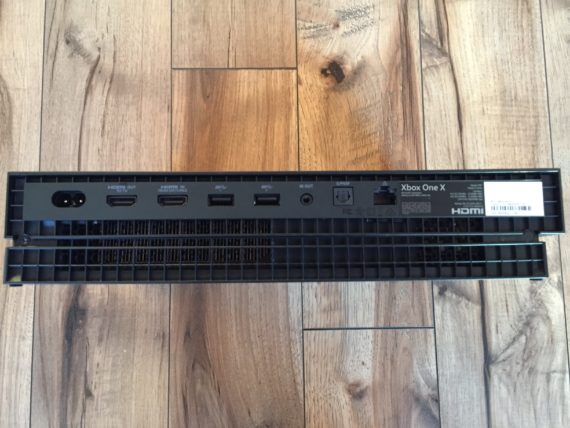 The sides of the console are minimalist and feature vents while one side has a little etching that says “Hello from from Seattle — Xbox One X” that compliments the Master Chief riding the scorpion etched inside the console that most will never see. 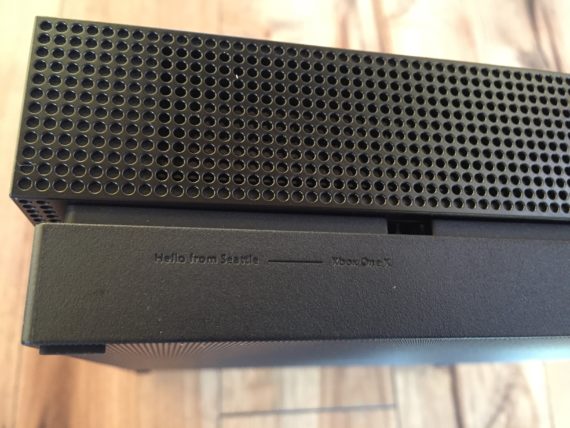 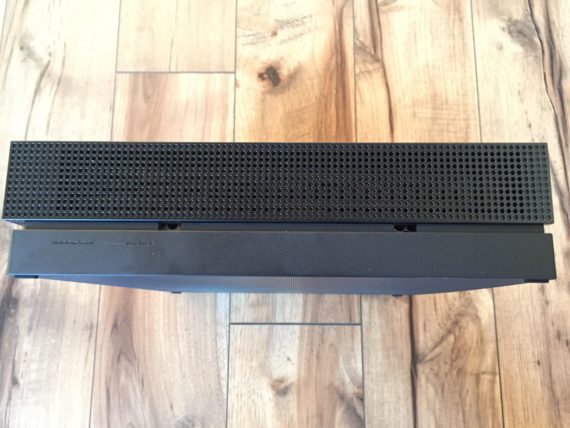 The top and bottom of the console are practically identical, with the top featuring a tiny Xbox logo and the bottom little rubber feet with a textured finish. 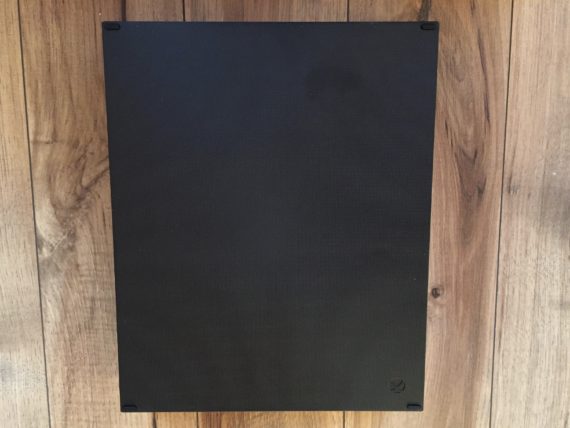 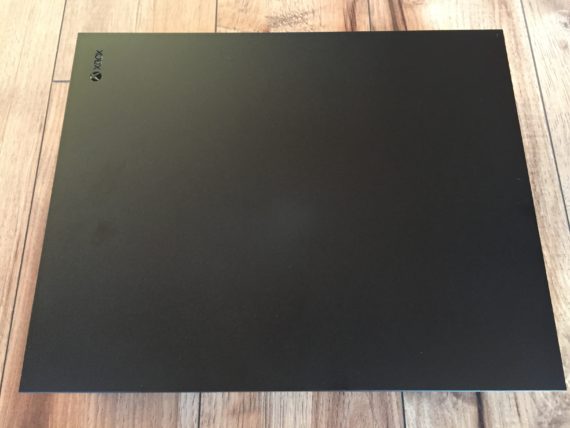 And unfortunately that ends our unboxing and tour of the physical side of the Xbox One X. We’ll have many more impressions of the console inside and out later in the week, but for now we leave you with a picture of the Xbox One X stacked on top of a launch PS4 and Xbox One to give an idea of the scale. As a side note, those consoles were pulled out of our media rack for the first time for this photo and we were shocked to find how scratched up the glossy areas were. Hopefully the matte finish on the Xbox One X will fair better to the dangers of sitting around untouched in a covered area. 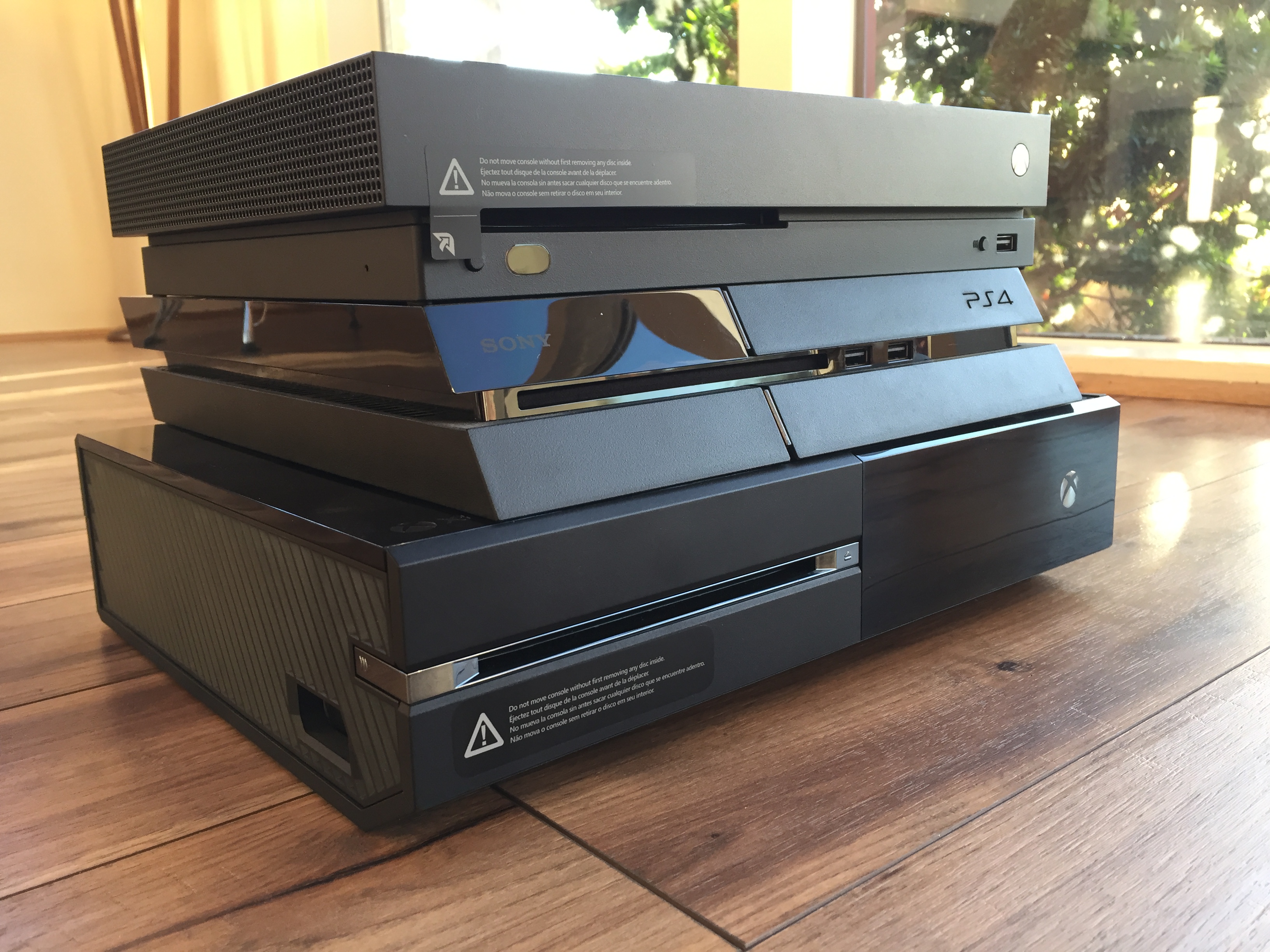