There are many reasons to visit Japan: good food, rich history and nice people. For gaming fans though, there’s one more: Super Nintendo World at Universal Studios Japan. While it’s not something one should plan their entire visit to Japan around, it’s something that every Nintendo fan should include in their trip. I recently had the opportunity to visit Nintendo’s first theme park, and just like the company’s games, it met all expectations. There’s still potential for growth, but this initial version delivers a fantastic Super Mario experience.

While playing Nintendo games like Super Mario Odyssey or Luigi’s Mansion 3, the attention to detail is often impressive in and of itself and the same holds true for Super Nintendo World. While walking around this real-life rendition of the Mushroom Kingdom, it’s hard not to notice just how thoroughly the area was planned out, and it starts the moment one approaches the entrance. 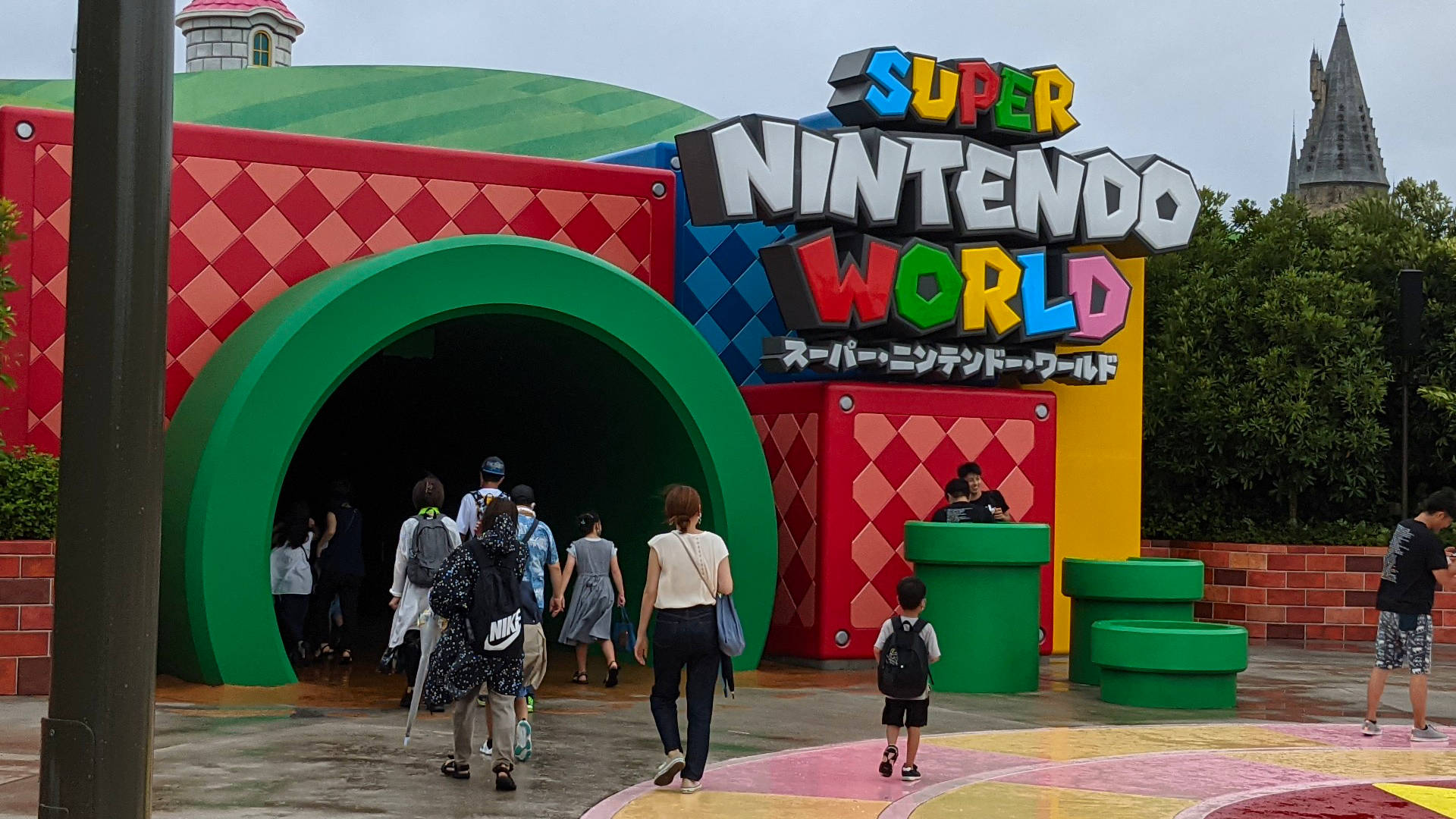 Super Nintendo World is entirely closed-off; it’s not entered through a wide open gate or passage like every other section of Universal Studios Japan. Instead, it must be entered the same way Mario would: through a warp pipe! After a brief trip through the pipe and hearing that iconic sound, guests will find themselves in the foyer of the Mario 64-era Peach’s Castle, complete with floor mural and paintings for Bob-omb Battlefield and Tiny-Huge Island. With a swell of the castle theme and a fade into the main Mario tune, visitors emerge from the castle and are greeted with a view right out of Super Mario 3D World. Thanks to all these details, walking into Super Nintendo World has a certain magic to it, a sort that gets stronger the more experience one has with Nintendo and the Mario series in particular.

One interesting quality of Super Nintendo World is that it isn’t actually all that big. In fact, it might be the smallest out of all the areas in Universal Studios Japan. Even so, it never feels small. There’s plenty of open space in just the right spots and the sense of scale on structures like Bowser’s Castle, Peach’s Castle, Mt. Beanpole and the terrain surrounding the rest does an excellent job of fooling one into thinking that the place is bigger than it is. The overall large scale of the brick, coin and mystery blocks as well as enemies like Goombas and Piranha plants also enhance this effect. One can dispel it by taking a good, hard look at the area, but the illusion immediately reasserts itself once one’s concentration slips. In effect, Super Nintendo World has an irresistible, larger-than-life feel to it. 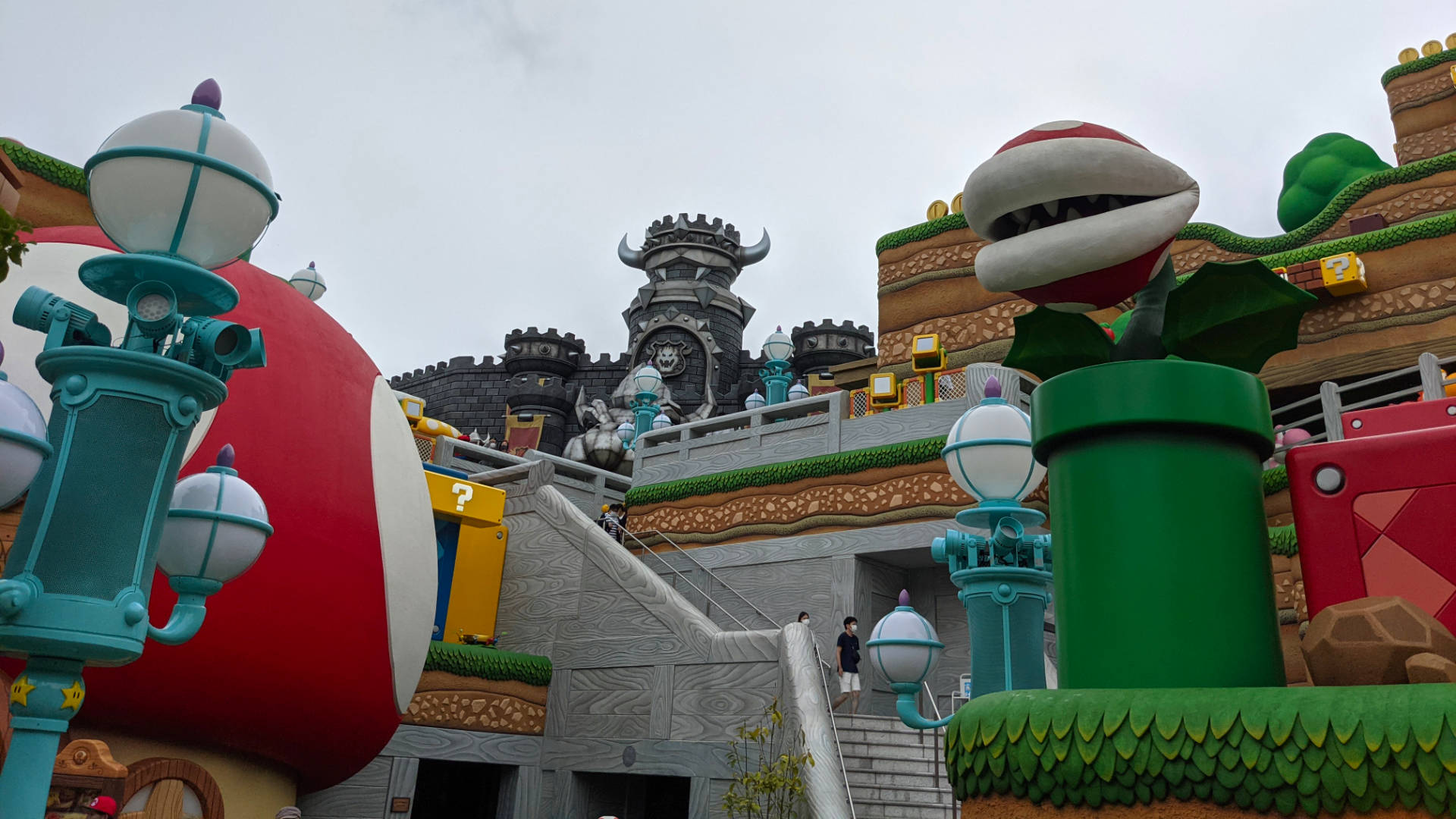 Upon exiting Peach’s Castle, visitors will be able to see the whole of Super Nintendo World. Directly ahead is Mt. Beanpole, which is covered with coins, blocks and enemies like Koopa Troopas. Below and directly in from of the mountain is a central grotto featuring coin and mystery blocks, a photo op spot and paths to the Yoshi’s Adventure ride, Toad’s Cafe, and the 1-Up Factory gift shop. To visitors’ right is a little gazebo featuring a photo-op with characters like Princess Peach, and to the left is everything else. This includes a ton of fun little minigames, a cave maze right out of New Super Mario Bros., a mushroom-covered sitting area and Bowser Castle, which houses the Mario Kart: Koopa’s Challenge ride.

The Super Nintendo World “power-up” band is usable on all these activities and rides as well as secrets scattered all throughout. Most of these are for increasing one score and completing challenges on a companion smartphone app, but the main mini-games actually unlock a boss challenge against Bowser Jr. Major mini-games include things like hitting a POW block to knock a Koopa Shell into a Key Coin, defeating a giant Piranha Plant and surviving a blast from King Bob-omb among others. These likely won’t interest older fans too much, but they’re fun to watch if nothing else. 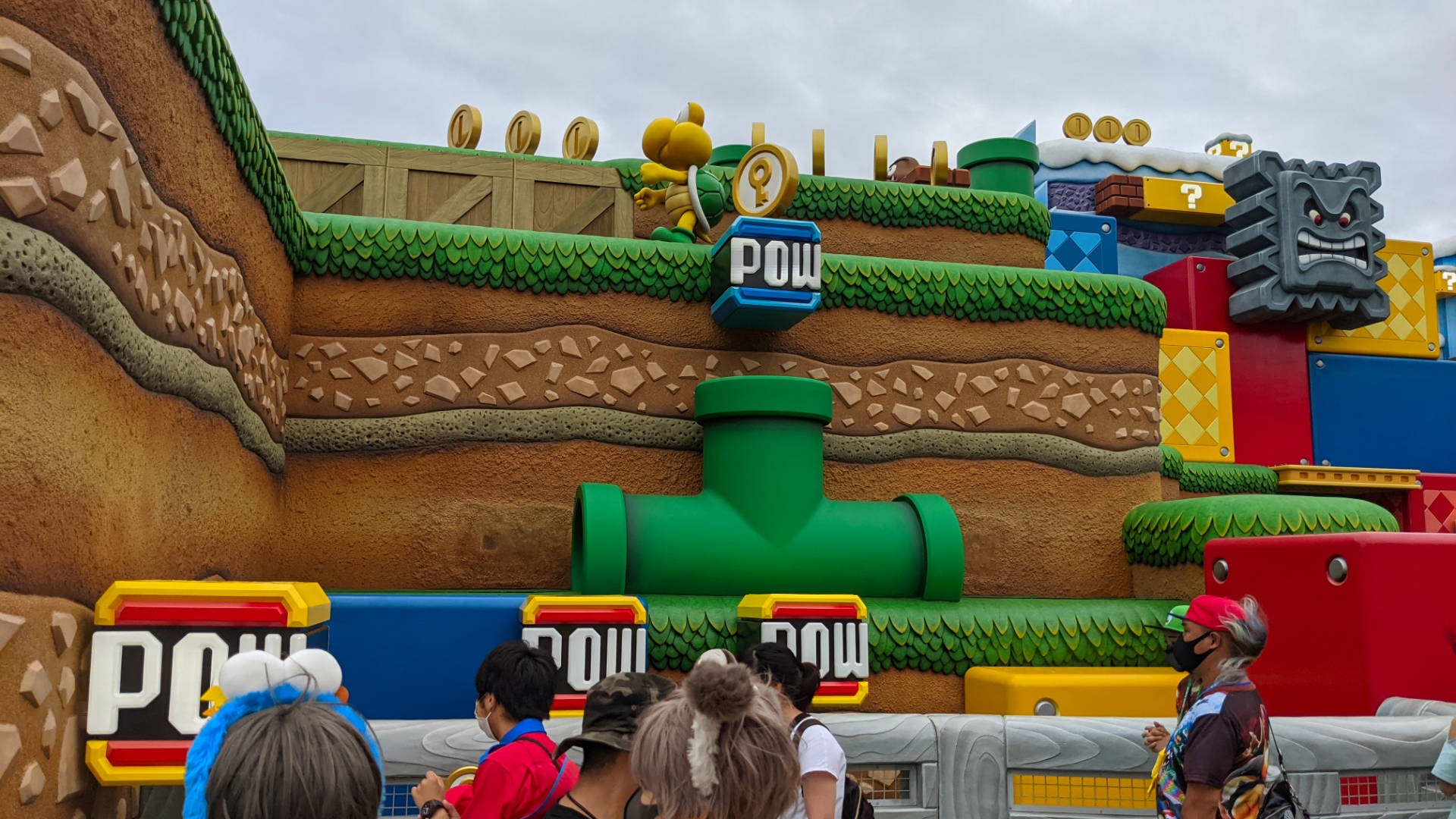 As for the two main rides, Yoshi’s Adventure and Mario Kart: Koopa’s Challenge, both do a great job of representing their respective series. Yoshi’s Adventure is 100% a family ride meant for young children, bringing Yoshi’s cuter and cuddlier aspects out in full force. Still, there’s plenty of nostalgia value here for older riders. The Yoshi overload begins as soon as one gets in line. The room is painted and decorated that instantly brings Yoshi’s Island to mind, and the music is a medley of themes from both that game and Yoshi’s Story. As for the ride itself, it’s basically a slow cruise through the carefree, shenanigans-filled life of a Yoshi. Yoshi fans will appreciate this no matter how old they are, but it’s better for kids. After that, it’s off to Bowser’s Castle and Mario Kart: Koopa’s Challenge.

The castle itself is impressive, looking most like the versions seen in the later Mario Kart games. Guests get to take a quick tour of the castle before getting in line for the ride; there’s even a massive statue of Bowser himself to pose next to. After that, though, it’s down to Bowser’s basement to take on his challenge. Unfortunately, this ride isn’t Mario Kart brought to life. It’s an on-rails experience similar to the Men in Black ride or the Buzz Lightyear’s Ranger Spin ride at Disney World. That said, it does have a few cool, modern twists to it. 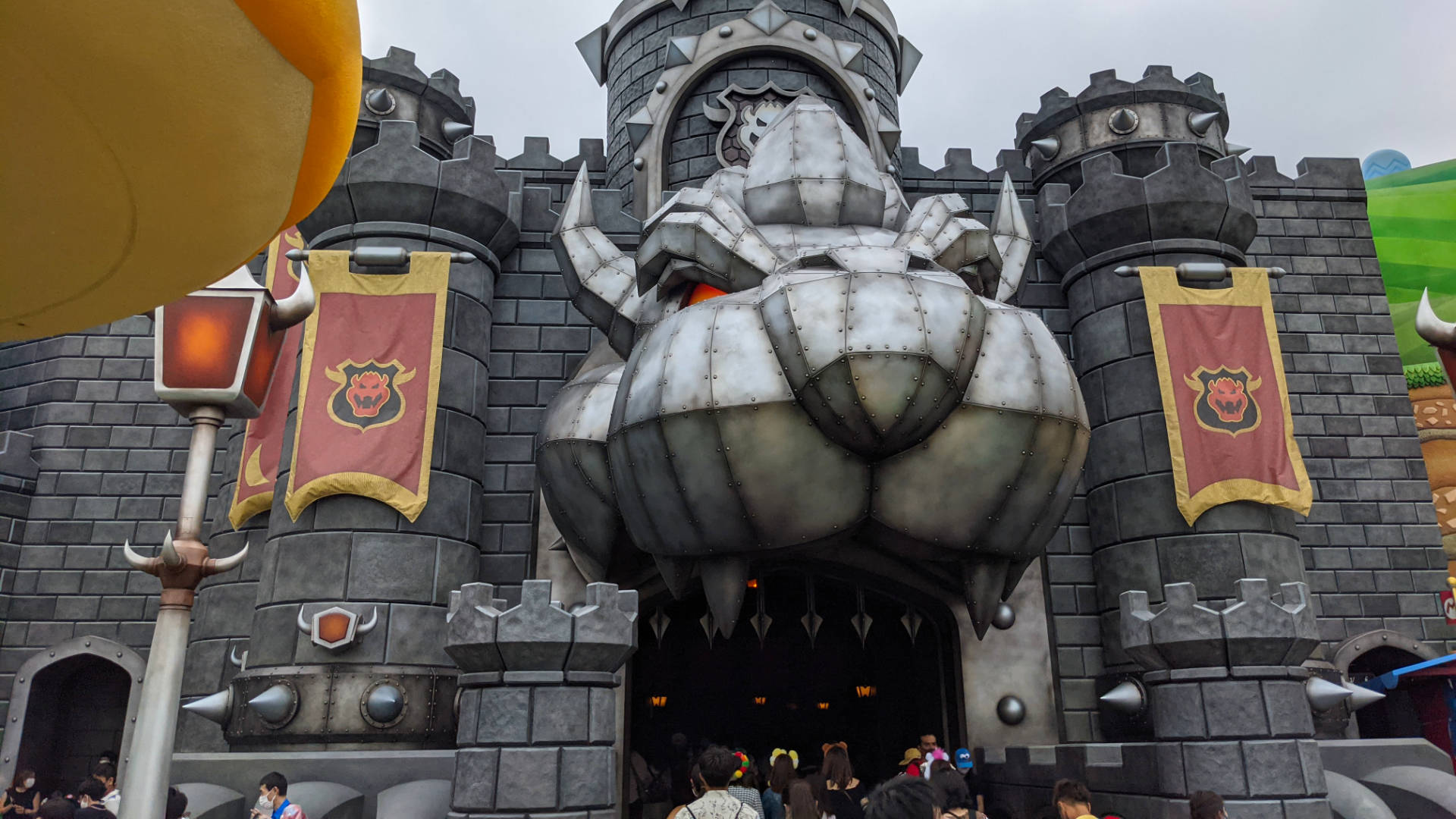 The most important of these is an augmented reality visor linked up to the ride; each guest gets one and it handles everything from digital characters to visual effects to your shell projectiles onto the physical ride. This mostly makes up for the lack of a freely-controlled kart, since it does a great job making one feel like they’ve been inserted into a Mario Kart game. As it plays out, item blocks must be collected and the resulting shells must be fired at any and all enemies that appear in one’s field of view. As one should expect of a gamified ride, everyone is competing for the high score. Between the visuals, the competition and making Bowser spin-out at the finish line, Mario Kart: Koopa’s Challenge is worth the visit.

Super Nintendo World is a place that’s stuffed with Mario content, yet somehow doesn’t feel overly busy. In fact they could probably stand to build it out further and add another ride or two in the future. A real life version of an enclosed level like Tick-Tock Clock, Hazy-Maze Cave or Big Boo’s Haunt would be and incredible addition, no? As it stands though, Nintendo fans visiting Japan should make a stop here; it’s an absolute blast!

Here are a few more photos for those interested: 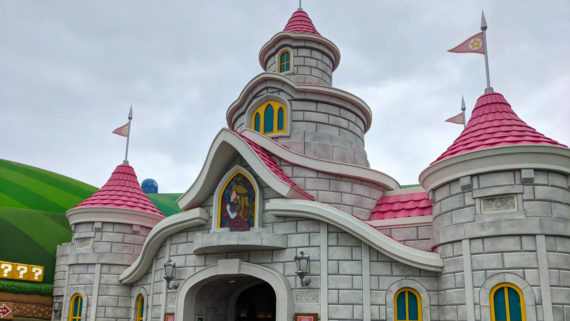 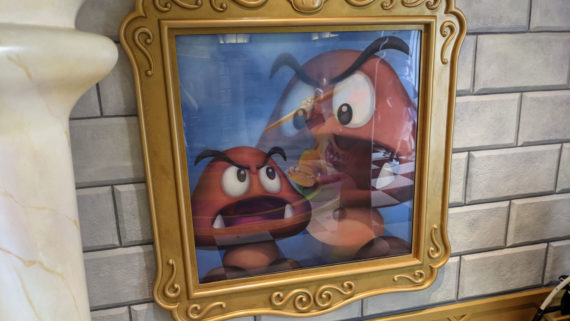 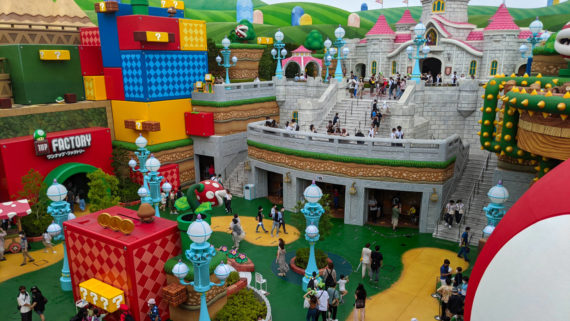 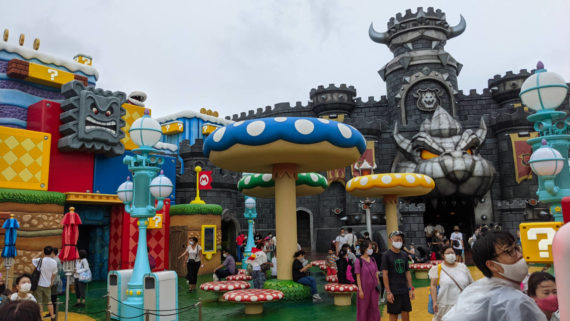 Why not take a break under the blue mushroom? 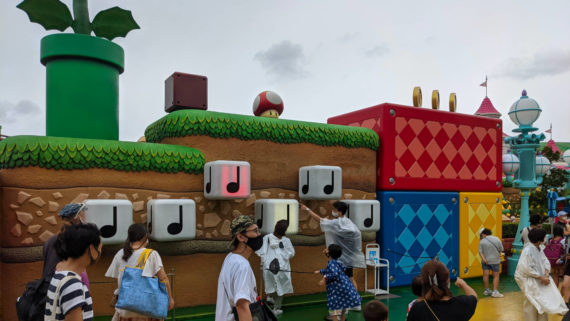 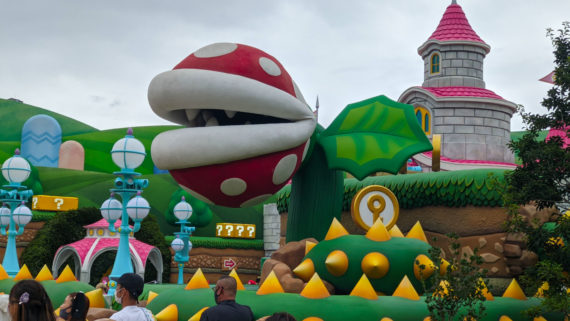 Don’t wake him up! 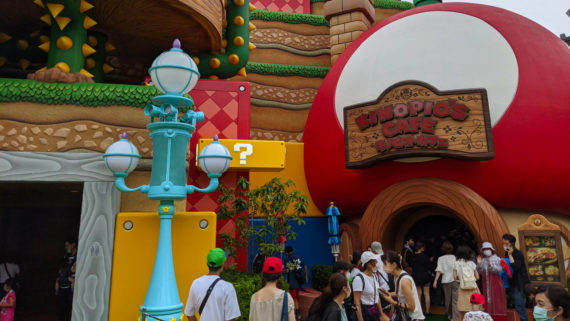 What could Toad be cooking today? 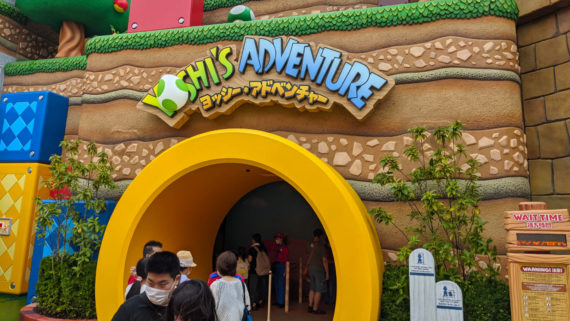 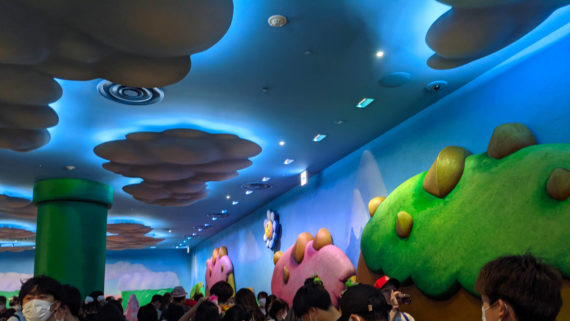 Take a trip to Yoshi’s Island!