It’s a dream for many people to have an arcade cabinet or a few cabinets in their homes, but it can be pricey and the search and shipping can be frustrating. Paying close to $1000 for one game or even a couple lands more on the side of being a collector. Then there is the untold truth of power bills. Old machines are completely inefficient and can raise your power bill to almost 500% the normal average. There are also custom built MAME cabinets, but lack the ingenuity of having something that feels authentic. A company has now stepped up with a variety of arcade cabinets that are not only affordable but also efficient. Arcade1Up is bringing a true arcade experience into homes everywhere and units can be purchased at most retailers. Does the final product hold up as a viable alternative to having a true arcade cabinet?

There are a variety of cabinets available to serve everyone’s needs. The most sought after cabinet is the Street Fighter cabinet. It includes Street Fighter II Turbo, Super Street Fighter II and Super Street Fighter II Turbo. The idea of having that in one’s home is the most inviting. The unit we received for review was the Rampage cabinet. It includes Rampage, Gauntlet, Joust and Defender. This is a wonderful mix of games to have in an arcade that would cost you roughly close to $3000 for individual cabinets. Other cabinets available include Asteroids (Asteroids, Tempest, Lunar Lander, Major Havoc), Centipede (Centipede, Missile Command, Crystal Castles, Millipede) and Galaga (Galaga, Galaxian). There’s also a Final Fight cabinet coming that includes 1944, Ghosts & Goblins and Strider. Each unit retails for $399 (Wal-Mart, FYE and Gamestop currently have them for $299), but some feel more price worthy than others simply based on the games involved. It really depends on what games tickle your nostalgia bone and the final product will do just that once assembled.

My initial thoughts questioned what the build quality would be and how much of a pain the assembly would be. I couldn’t have been more wrong. I’ve struggled much more with assembling coffee tables than this. I assumed for the price, the build quality would be something akin to a bookshelf from Big Lots. Arcade1Up couldn’t have made assembly any easier. Needing only a Phillips-head screwdriver, assembly took roughly thirty minutes. The display is a 17-inch LCD screen and everything basically sits correctly in place. The gamepad comes completely assembled outside of screwing in the top of the joystick. The cabinet seems to be a higher quality wood combination than what you would get from those bookshelves mentioned above, but it’s no solid oak. The finished product is completely sturdy and doesn’t seem to want to loosen up over time. 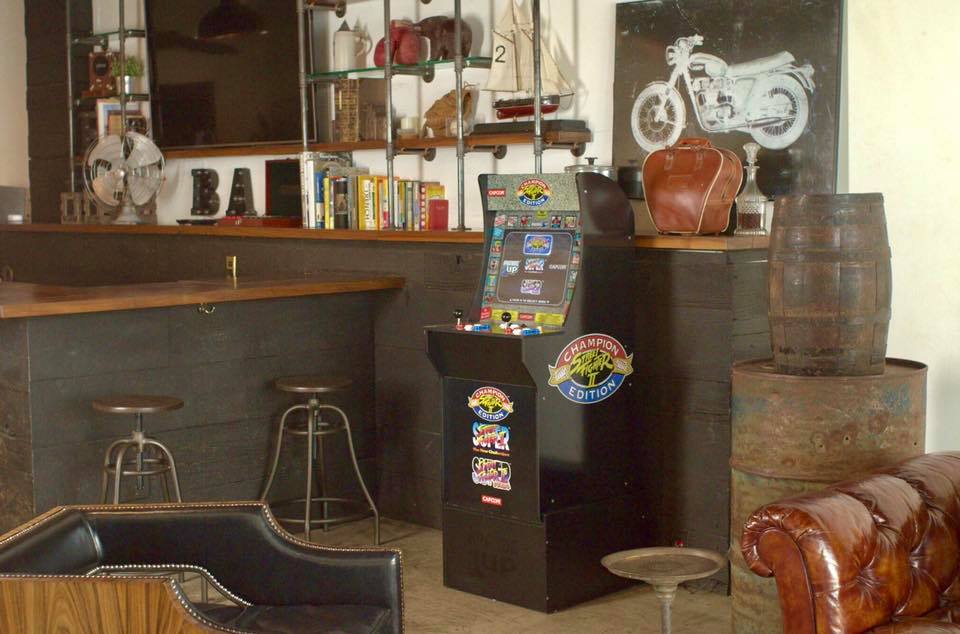 Speaking of the finished product, you will become completely in awe at the attention to detail that went into one of these. Even if you don’t ever plan to play the unit, it’s a wonderful piece of nostalgic furniture to have as decor that makes you appreciate the money spent. Each cabinet contains the officially-licensed artwork for the main game involved. This includes the border around the monitor. The joystick and buttons are durable and everything is responsive. Each game cabinet has its official control layout and isn’t just some generic setup. It truly is a functional replica of the full setup that is just pretty to look at.

The Arcade1Up cabinets do sit at only about four feet high. The Rampage cabinet came with three available player setups, and may be tight for some people to stand and play but with two people there were no issues. With just the cabinet, it’s perfect for grabbing chairs and pulling up to play. Almost feels like a throwback to the Pizza Hut coffee table setups from the 80s. Arcade1Up does have some accessories to help. For $50, a stand can be purchased to raise the height about another two feet. There is also a stool available if you want to go that route. The cabinets are geared towards kids out of the box, but enough options are available to make this extremely fun for having friends over. 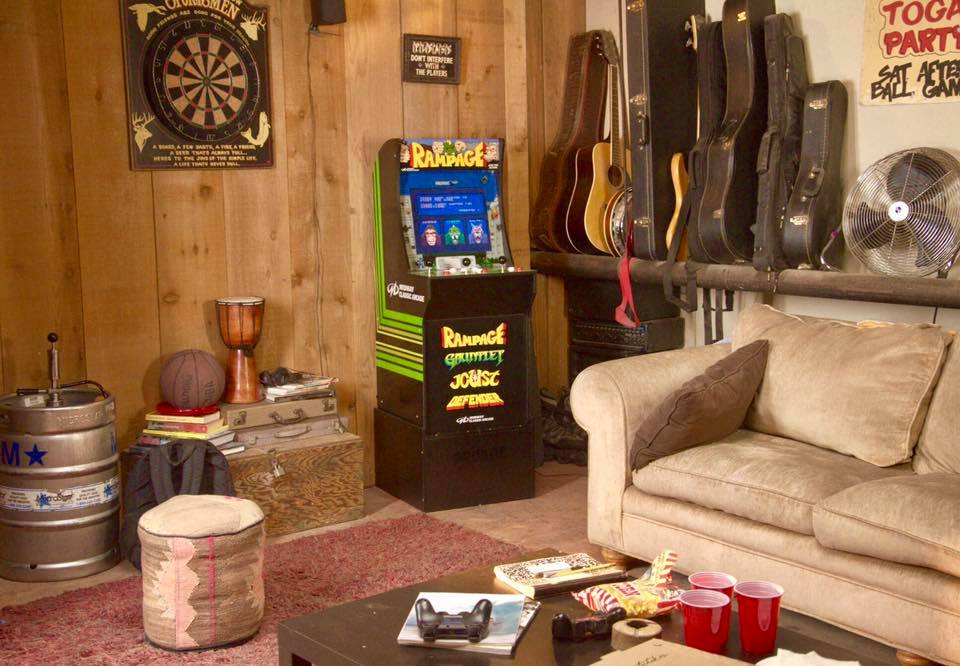 The system boots to a menu that allows you to choose which game you want to play. Volume is controlled by a switch and is output via a mono speaker on the controller portion. Jumping into Rampage felt arcade perfect but the visuals seem to get a bump. Colors jump out better on the LCD screen as opposed to the old CRT setup and there seems to be a smoothing filter to help bump the visuals. Rampage allows up to three players. Gauntlet doesn’t have the color pop that Rampage does, but still looks like it should and runs decent. Holding down the attack button doesn’t work too well due to the amount of enemies on screen. This is a good way to test those buttons by consistently hitting them.

The only major issues I had involved Joust and Defender. Joust is touted as multiplayer, yet I was unable to get a second player into the game. Hitting the Start button for Player 2 just added combined credits. Defender lacks the proper amount of buttons, so it’s spread out across the board for one player. It’s possible to take turns, but not the experience one would be going for. Each game launches with a screen that shows the controls and these two clearly don’t follow it. Unfortunately, there’s no way to remap things and there also isn’t a way to update the board. This setup isn’t some Raspberry Pi cash-in, so everything is on an old school arcade board built into the joystick. No USB and no Ethernet to allow for any updates, so you’re kind of stuck with the issues from these two games. 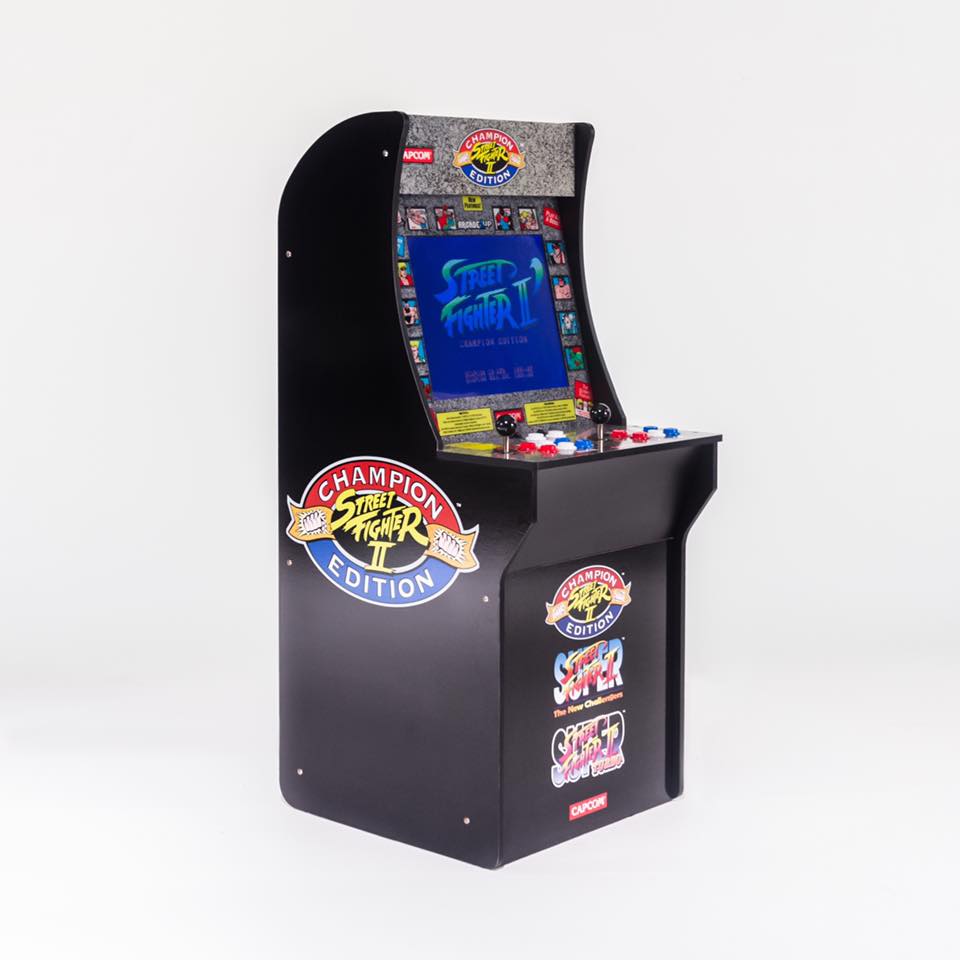 Arcade1Up’s arcade cabinets are a thing of beauty once assembled. The appreciation of the effort by the designers is truly noticeable once the final product sits elegantly in the room. It’s like a toy version of the real thing that brings a true arcade experience into your room at a reasonable price. The idea of having a Street Fighter II arcade cabinet in your house for under $400 that has the durability that you expect from a real machine is inviting. Add to that the real artwork and design of the original cabinets and these machines will leave a smile on your face. Paying $400 for Gauntlet and Galaxian isn’t nearly as inviting, but it might still be cheaper and easier than finding a real machine. While there were issues with two of the games on my cabinet, those will be the lesser played game as they do feel like fillers. These cabinets are not given enough justice until you see the final product. What better project to do with your kids on Christmas then assembling one of these and enjoying the finished product.