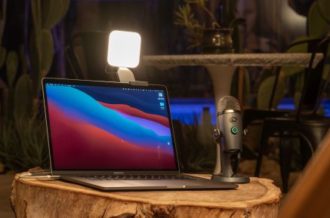 There are few, if any, computer peripheral manufactures that I prefer over Corsair. Their keyboards and mice are among some of the best in the industry, offering both incredible value and a multitude of options for your gaming needs. You’re like me and are obsessed with Final Fantasy XIV? Well the Corsair Scimitar is the way to go. Need a bumping headset? The HS70 should be on your ears. And of course, every computer needs a good keyboard and this is where the K95 Platinum comes into play. The original model came out a couple of years ago to immense praise, but Corsair has been incrementally improving upon its splendid design to create the next big thing. Now that we’ve had a few weeks of hands on time with the K95 Platinum XT it has become my favorite keyboard to use for both gaming and work, but it’s not without its issues.

There’s no better place to start than with the design. The K95 Platinum XT has been immaculately crafted as the brushed aluminum frame adds quality weightiness to it. This is a heavy keyboard, one where if you were to defend yourself from someone with it, your attacker would go out like a light. Corsair has even gone the extra mile to include cable routing on the bottom, although this will most likely be useless to the vast majority of users. There’s also a USB passthrough on the back, which even if I still have a tendency to forget about it, is always appreciated. The only disadvantage would potentially be the legs. It lifts the device up high enough, but I’m just not a huge fan of the horizontal design when popping them out. As someone who has a tendency to move the keyboard around the desk, making slight adjustments, the legs will collapse back into their default position if too much sliding takes place. This can be avoided by simply lifting it up when moving it around, but considering Corsair did make this hefty, it requires more effort than I’d hope to do small adjustments. 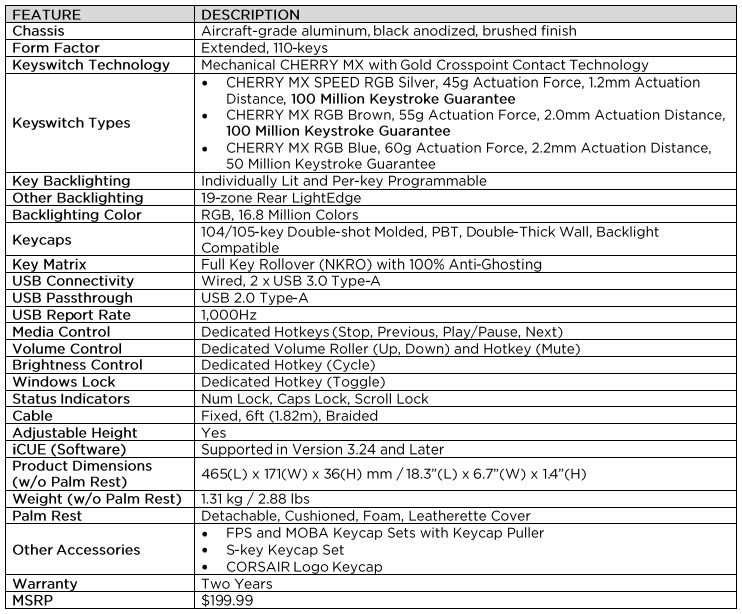 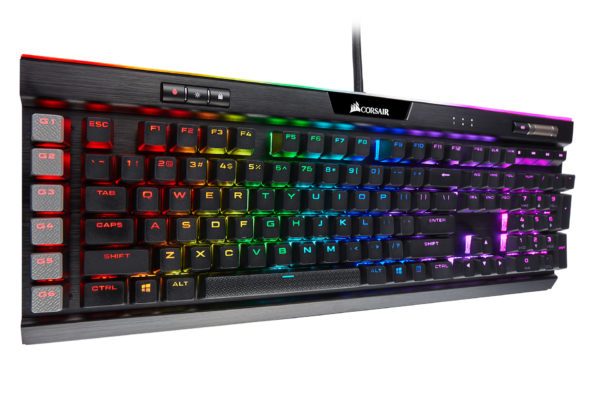 As the name suggests, the Platinum XT includes fully RGB backlit keys that can be completely customized in Corsair’s iCue software, and to our surprise, StreamDeck Software as well. You’re able to change the brightness with a single tap of a button, along with switch between profiles and a Windows key lock, but it’s the in-program actions that offer a staggering number of options. iCue itself is a versatile program, being able to record macros with specific details regarding what’s pushed and how fast you lift your finger, down to the millisecond. There’s a plenty of variety when recording your actions, and it’s not just macros, either, as you can make text commands, launch specific programs, set a timer, media functionalities and even more. The RGB lighting is what most users will take advantage of, being able to modify the look and style of the keyboard. If you’re not partial to making your own animations and lighting effects, Corsair has stored 8MB of onboard profiles. There’s also OSD (on screen display) options for specific games. Suffice to say, Corsair has made iCue and the Platinum XT the ultimate customization hub to best suit your needs.

The Platinum XT comes in three different key switch variations: Blue, Brown and Silver Speed. We elected to go with the Brown for the tactile feel which still is so satisfying. Still, if you desire more of a clicky or linear keyboard, the XT has both options readily available. Best yet, while most keyboards support a 50 million keystroke guarantee, the Brown and Silver Speed ensure for 100 million. This is a keyboard that’s meant to last longer than its competition. One of the most attractive components to the XT outside of the RGB backlight is the six full programmable macro keys. Located on the left side, this extends the keyboard to just over eighteen inches in length. If you haven’t used a keyboard with this extension, or haven’t in a while, you’ll have to get used to accidentally hitting the first marco button over escape (that or just map it to that key so it’s a bit more convenient). Even better, this is now integrated with StreamDeck functionality, so if you’re a streamer, you’ll have even more control at your fingertips. Corsair has also included textured keys for WASD along with alternative blue keys (with S1-6 instead of G1-6) if you wish to customize the side macros to better represent your gaming and streaming functions. Heck, there’s a secondary escape key that showcases Corsair’s logo, and QWERDF keys, as well. This is on top of throwing in a Keycap Puller. Finally, with all of that said, I’m still not the biggest fan of the textured space bar. It’s not bad by any means, but it feels more sharp and ridged than the WASD keys. 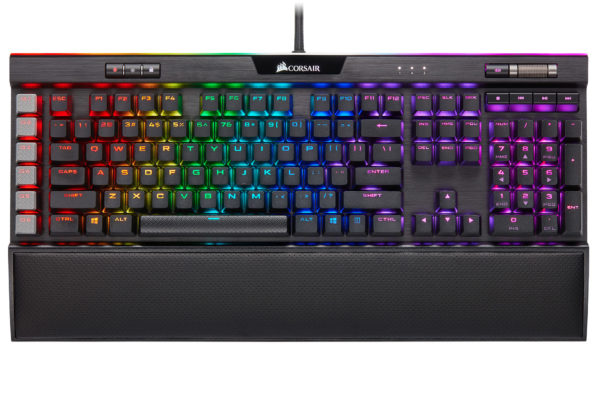 The K95 Platinum XT also comes with a wrist rest and it’s one of the better ones. I’ve become so used to just simple soft plastic rests that aren’t particularly comfortable nor uncomfortable. They’re just something that declines from the keyboard for you to rest your hands on. Fortunately, the K95 Platinum XT comes with a fully-cushioned leatherette, meaning it will feel plush and soft when you place your palms and wrist on it. If you aren’t someone who uses wrist rests, know it’s an optional accessory as you can detach it at any point, but I find a hard time justifying this.

I’ve praised the keyboard’s design and functionality, but there’s still a couple of aspects that I struggled with. For starters, this is valued at $199.99, and being only an incremental improvement over its last generation counterpart from three years ago, it’s a hard pill to swallow. Also, we had serious issues with the RGB animation freezing in place randomly, with the only fix being having to log out or restart the computer entirely. It’s not just the presentation that takes the hit here, but the profile, lighting and windows lock buttons at the top left also becoming inaccessible when this occurs. Finally, one design choice I would have modified is the multimedia volume scroll bar. I always love when keyboards include this, and while I’m more or less fine with the buttons and their placement, the scroll wheel feels far too stiff for its own good. There’s a little bit too much traction on it that, and while you get used it whilst in the motion of scrolling up or down, its immediate touch requires a little more force than I would have liked. At least it feels like a quality scroller. 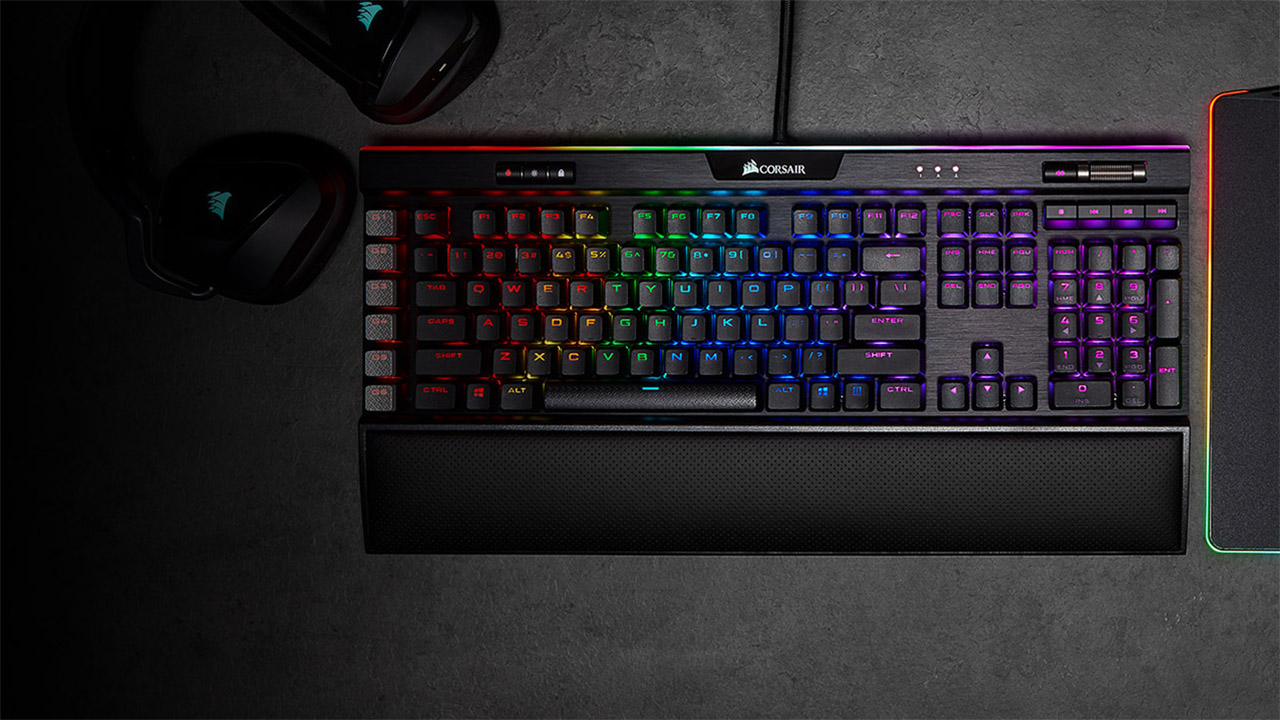 The Corsair K95 Platinum is one of the best keyboards on the market and its XT counterpart is no different. It has been designed perfectly with quality in mind, but with that comes a hefty price point, holding it back from the mainstream. You can occasionally find the original model for a significantly reduced cost, and being as this is only an incremental upgrade, mind you a good one at that, it only becomes justified to move up if it’s within maybe 25% of the price — that or you have to have the latest and greatest. It also has a volume wheel that could be a little looser as it’s a bit too stiff, and the lighting animation does lock up on a frequent basis, causing functionality for profiles and the windows key lock to be in accessible. Regardless, if you have the cash to invest in this $199 keyboard, you won’t be disappointed. Despite these issues, iCue offers an incredible amount of customization, be it lighting or marco keys, and the plushed, cushioned wrist rest is a nice touch. The textured keys are always a welcome addition and the brushed aluminum frame gives it a sizable weight to it that makes it feel something of excellence. It will be the highlight of your desk. Sure, there are some issues, but this is my new favorite keyboard, and it will no doubt be yours as well.