3D audio is one of the more recent features incorporated in gaming headsets. This is a similar in concept to surround sound, but the technology is going for a more immersive sound experience, where moving the player’s head in real life will have an affect on where the sound is heard to originate. Audeze was the first company to incorporate 3D audio into gaming headsets and has since been seen in products by HyperX and Turtle Beach. JBL’s latest headset, the Quantum One, is the newest headset to incorporate this technology.

The JBL Quantum One is a headset optimized for PC gaming but can work with any hardware with a 3.5mm input. This headset has three different sound settings: stereo, DTS surround sound and 3D audio with head tracking. These settings can be toggled through the JBL software that also manages the sound EQ and lighting effects. This software is a good hub to configure everything and switching between the three sound modes is intuitive with no hassle after everything is calibrated — more on that later. There are several different EQ settings so it’s easy to find the sound you want or at least a baseline to tweak to your personalized specifications since the presets can have their different frequencies individually adjusted. The lighting mode has three parameters: logo, ring and notch. There are several presets that involve different movement patterns and colors, and with the advanced controls the user can further personalize the lighting effects, so there are a lot of quality lighting options for people who are into that.

Selecting the different sound modes was not quite as easy as the interface initially made it out to appear. Having used multiple surround sound headsets I knew something was amiss when there was no change in audio quality when I switched from stereo to DTS Surround Sound in the middle of a song that was mixed for 5.1 audio. It turns out there is a process to calibrate the 7.1 surround sound, which involves removing any previous JBL drivers and installing the newest drivers on PC. It is then required to configure sound settings make sure that the Quantum One is the default output device for games and 7.1 sound. It also needs to be configured to 16-bit 48000 Hz (DVD Quality). During the review process there were a couple times this process needed to be repeated, so hopefully with some software updates surround sound stability is improved. 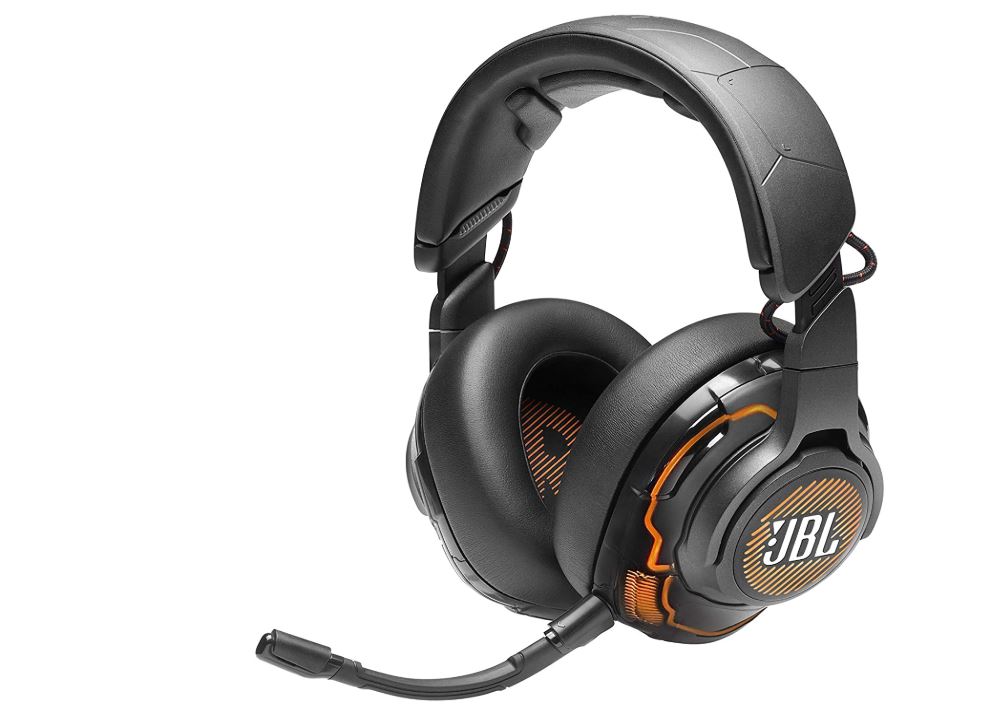 Another feature that’s included and mentioned on the box is head tracking for 3D audio which was first seen (by this writer at least) in gaming headsets with the Audeze Mobius. For those who haven’t experienced it, head tracking is some cool technology where it’s the audio equivalent of being in a VR headset. If you hear sound to your right and turn your head to the right the sound is now originating in front of you, creating a truly immersive experience where it sounds like you are in the middle of the action. This is a great feature especially in competitive first person games. The problem here is that the 3D audio head tracking calibration was not available at the time of review or retail release. The software is updated to the most current version and when I reached out the rep I was informed that the team is working hard on refining the head calibration feature and hoping to have it ready later this summer.

So far the Quantum One has a couple strikes against it with the process of setting up the surround sound being somewhat involved and the 3D audio head calibration looking like it’s going to be a couple months out. The positives are is for the things that do work, the audio does sound like one would expect from a headset in the upper tier of gaming headsets but not quite audiophile grade. PC gaming is where this headset excels since that’s where the user can tweak the sound with the EQ and use the three different sound formats. The surround sound, once it’s set up, sounds great. Hearing the sounds of enemies in video games originating from your flank and behind you does give a competitive edge and greater immersion. Visual cues are the primary threat indicator in games but adding location specific sounds allows for an enhanced gaming experience. 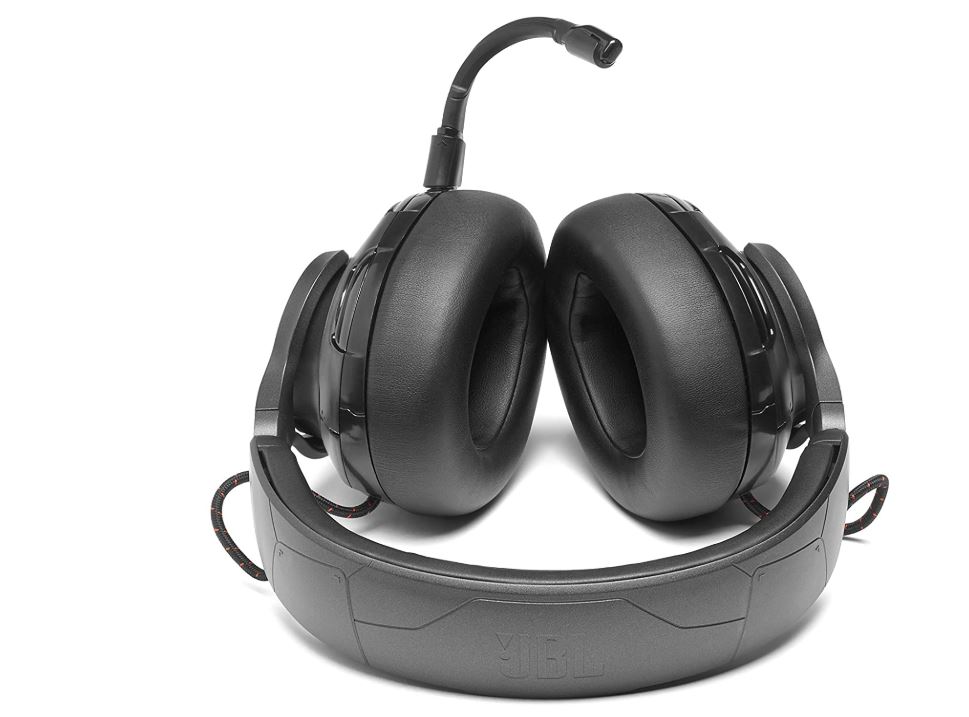 The Quantum One is compatible with just about any device with a 3.5 mm input including Switch, PlayStation 4 and Xbox One. Using the headset this way won’t allow access to the JBL software, surround sound or 3D audio but does work as a high quality passive stereo headset that works for game audio and chat. The noise cancelling does a good job of blocking out sound from the outside and for passive use the sound is great. Using the Quantum One with PlayStation does provide a good sound experience. The headset is capable of raising some of the quieter tracks in the mix so you can hear elements of the soundtrack that normally are buried in the mix. The sound experience isn’t as good as someone would get from a headset optimized for consoles but this does add value to the PC headset.

The Quantum one is about the average weight of a gaming headset and remains comfortable after a couple hours of use. The braided USB-C that it comes with is stiff so it’s doesn’t move about as freely as some other wired headsets. There’s a large volume wheel on the cord that makes adjusting audio on the fly easy which is actually a nice feature about this headset. 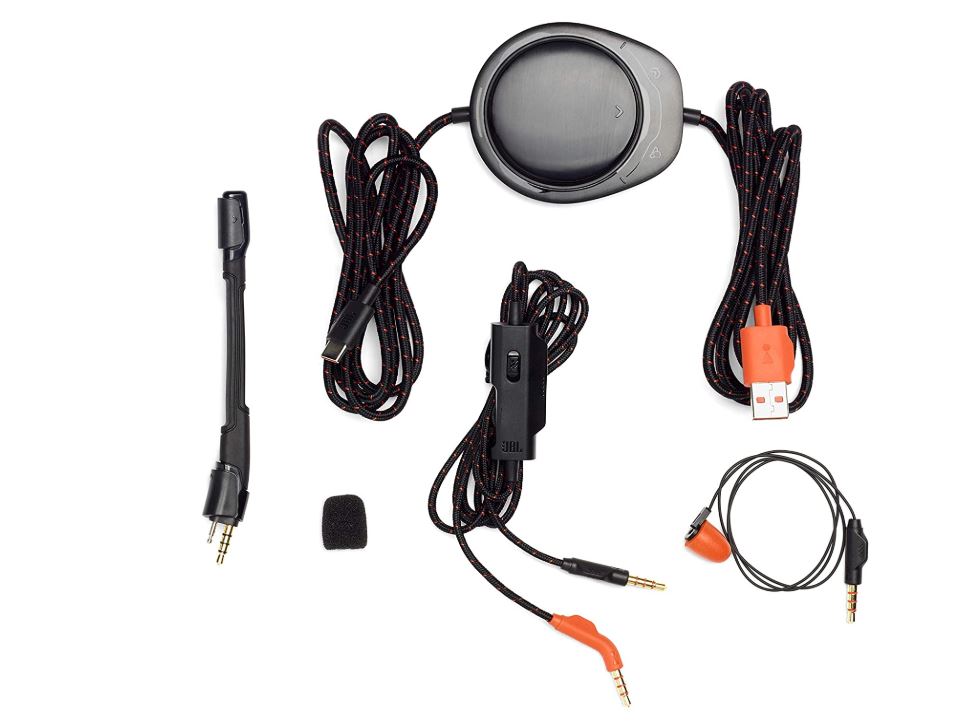 The JBL Quantum One has the potential for greatness but seems like it needs a little more time in the oven. The sound quality is excellent, and the surround sound is great when it works, but getting it to work and keeping working is a bit of a hassle. The 3D audio and head tracking, based on the quality of other features, will likely be good when implemented but unfortunately no comment about its quality can be made at this time. In its current state it is hard to justify the $299.99 MSRP, especially with 3D audio and head tracking being the more expensive features, but that may change depending on future software updates.