Lightguns were once a fairly common video game commodity, regularly seen affixed to various arcade cabinets as well as with some home consoles in the ’80s and ’90s. They aren’t extinct yet, as occasionally one can be spotted in the wild in one of their coin-operated natural habitats, but there hasn’t been a memorable lightgun for the home market in quite a while. PDP is attempting to change that with their MARS lightgun system. MARS is a new light gun peripheral for the Xbox One and PlayStation, bringing arcade-style shooting to the living room. Currently there are three different games available for MARS and it’s available in three different bundles for $99.99 for both Xbox and PlayStation 4. These bundles include one MARS IR Station which is the camera, one MARS Lightcon which is the lightgun and a digital download code for one of their three games: Voyage of the Dead, Big Buck Hunter: Arcade and Qubit’s Quest. Each game is available for individual purchase on each console’s respective marketplace for $19.99. The Lightcons require two AA batteries that are not included. MARS supports up to four players and additional Lightcons can be purchased for $29.99 and are universally compatible with Xbox One and PlayStation 4. The Lightcon uses low power IR laser to help assist with precision aiming and the camera connects to the console via USB cable, ensuring that it will be compatible with any display including SD, HD, 4K or projector.

Setting up the MARS system on the PlayStation 4 is simple. The IR Station needs to be connected to the console via USB and then the Lightcon needs to be paired by holding down a button on the right side of the gun. The camera needs to be synced to the TV screen which is easy but may require some placement adjustments. The guns have a good weight and size to them; not the same as holding a real gun but similar enough where there’s some muscle memory crossover, such as using the front and rear sights to line up with the target. Squeezing the trigger feels natural and the gun has a slide that makes it feel a bit more realistic than the classic NES Zapper. The lightcon doesn’t fully replace the controller, so having one of those on hand to navigate the system menu and pause games is required.

Once everything is hooked up the MARS can be a blast. Whether sitting from the comfort of the couch or from a more proper standing position there’s something inherently satisfying about shooting at one’s TV. The drawback with MARS is to maximize the enjoyment a second lightcon needs to be purchased for multiplayer. During the review process there weren’t really any issues with tracking, what I aimed at was hit most of the time and there weren’t any misses that felt cheap or like a technical glitch. Loading and shooting happened in real time without any noticeable delays so it felt like a real arcade experience. The game choices are fairly diverse, considering the basic premise of each of them is shoot something on the TV, but the current titles will help determine which bundle is most appropriate. 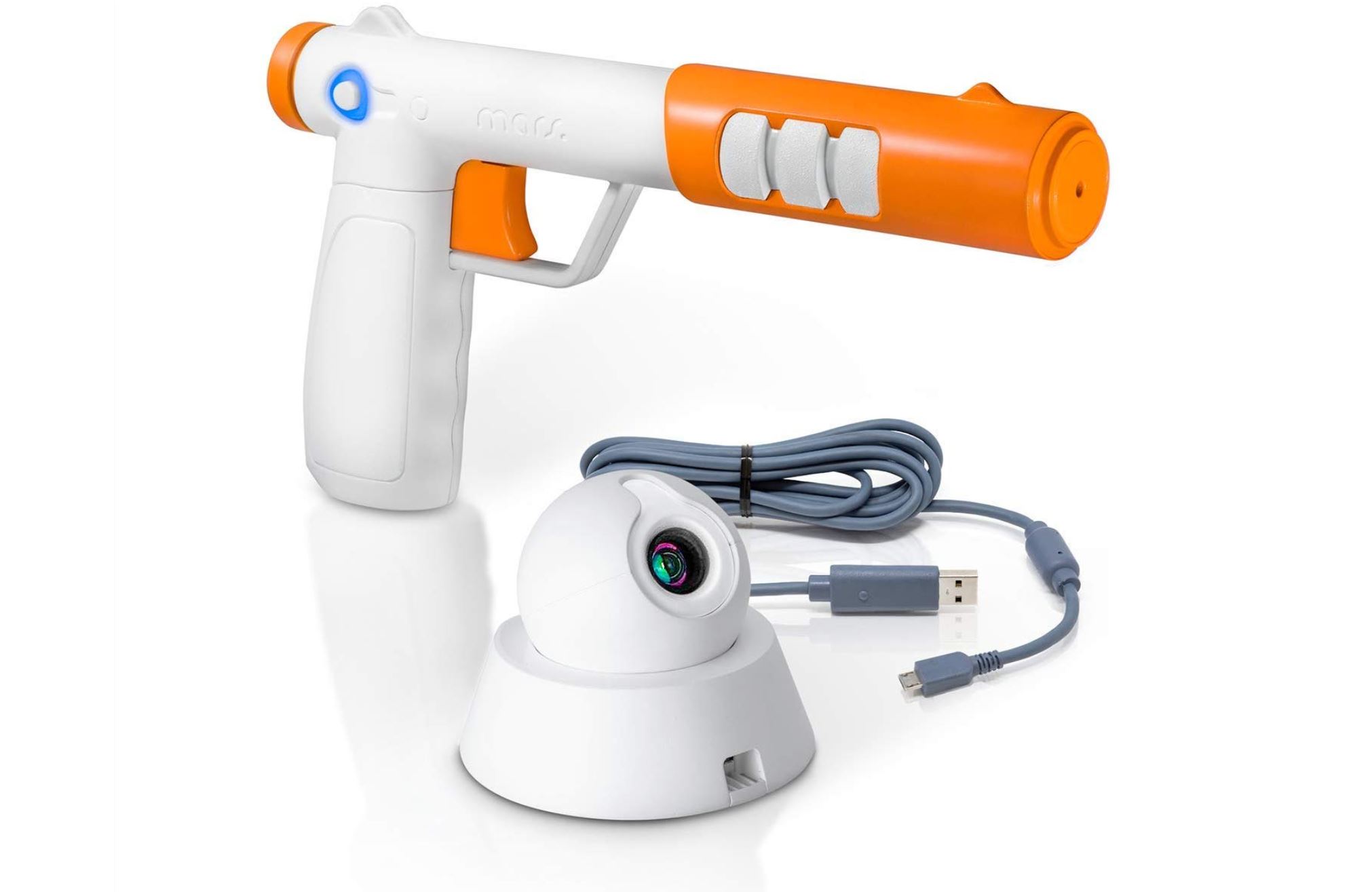 Whether at a truck stop or proper arcade, there’s a good chance you’ve spotted a variant of Big Buck Hunter: Arcade in the wild with its big plastic rifles. This is the home game, with the pistol Lightcon behaving like a single shot rifle. This is a game about precision and patience. This title attempts to simulate actual hunting, so recklessly firing is not recommended. Points are only awarded for shooting the designated targets and not any of the random animals that tend to get in the way. The game spans several different environments with a variety of game to hunt. To be honest I was never into hunting games after Duck Hunt so I can’t judge this against its coin-operated brethren. What can be said is taken on its own merits this was enjoyable and helped establish an appreciation for these type of games since they require a bit more nuance than just running out guns blazing. There were some framerate hiccups with this one but they were rather rare and not game breaking. 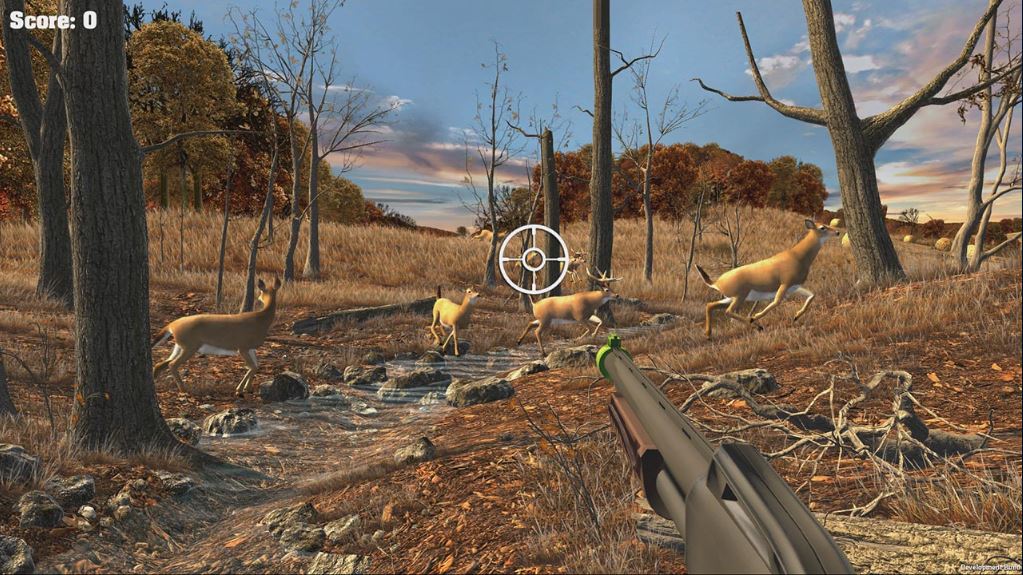 This is the most family-friendly game out of all of them. It’s also the strangest and my least favorite, but I’m old and bitter so not the target demographic. Qubit is a mechanical dog who moves on his own accord in a post-apocalyptic world. Quibit is trying to gather intel against a hostile AI named Kwantum that is trying to take over the world, so think Skynet but if Terminator was a kid’s movie. The player is tasked with protecting Qubit from enemy robots and clearing obstacles out of his way. For some reason this game conjured up images of opening a beer can with a gun. This game was a twist on what a lightgun game typically is and some of the level designs and targets were creative. It’s a rather short game, clocking in around an hour or so. This was mildly entertaining but twelve years old is probably the ceiling for people that would get into this one. 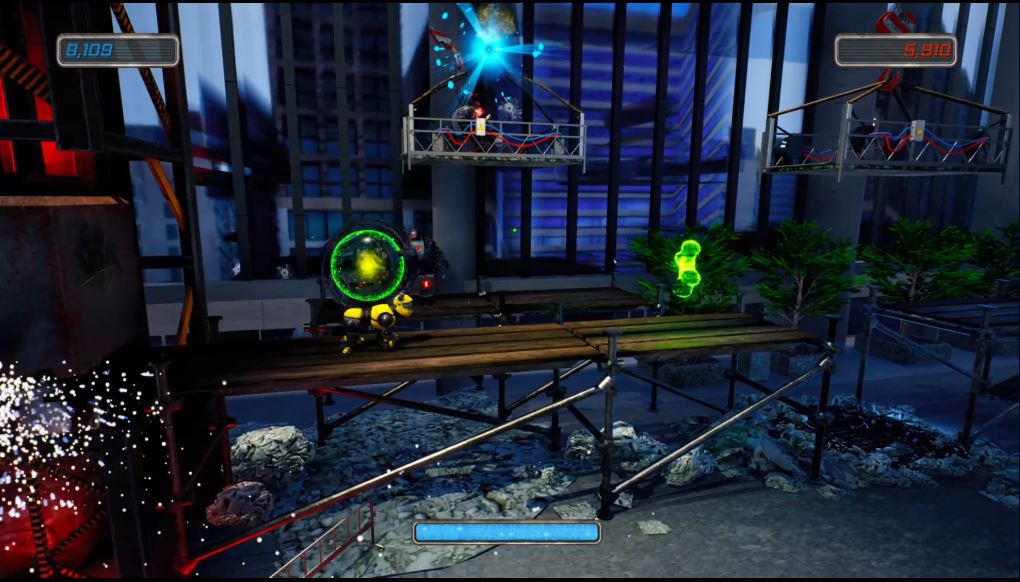 Voyage of the Dead

This was my favorite and naturally the one I would recommend for anyone who isn’t a die hard hunting fan. This is a rail shooter set on a cruise ship that has had an unfortunate outbreak of zombies. Shooting zombies on a rail shooter like the most generic experience ever, but trust me, this is a good time. The artists went to a lot of trouble designing a varied cast of undead targets with ridiculous levels of over-the-top horror movie-style gore making this the one M rated MARS title. Conventional wisdom suggests headshots are the best way to de-animate the reanimated corpses and this would be correct. Aiming seems on point, and the basic mechanics of shooting, reloading and swapping weapons are perfect. Even if cheesy horror movies aren’t your thing, there’s something inherently addictive about traveling through the cruise ship shooting down an endless horde of zombies. Getting a friend or three involved makes the experience much more enjoyable. 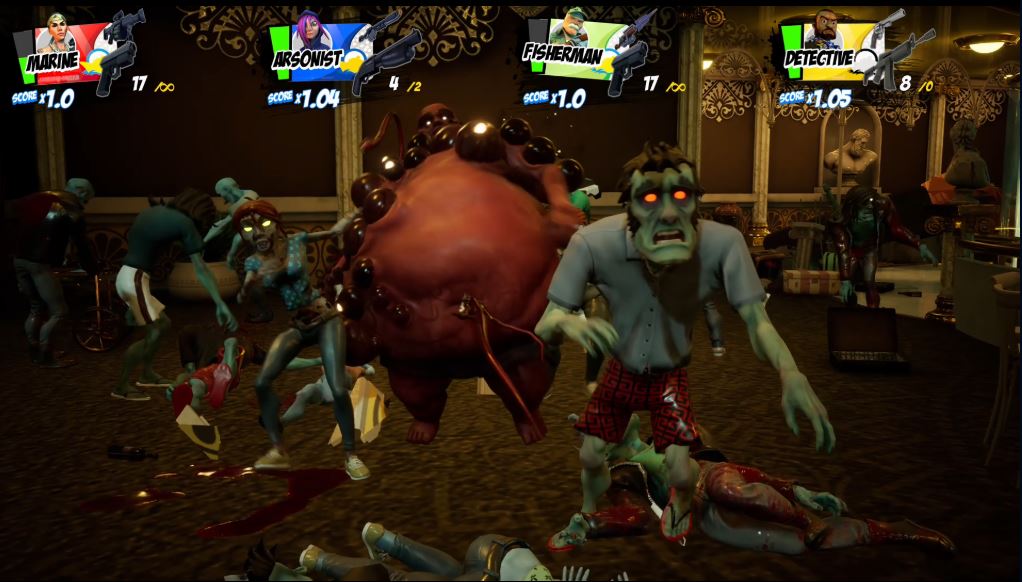 The MARS lightgun system puts forth a respectable effort to revitalize lightgun gaming. The hardware performs admirably and the shooting experience feels more accurate than some recent past attempts at recreating console shooting games. Like any gaming peripheral, the MARS is limited by its gaming library. The three titles show that a variety of games are possible with this and while they are all enjoyable to some degree due to the niche and varied nature its unlikely that all three titles will scream “must play” to an individual. The hardware feels well made and functions properly so for now this is a system that could be fun for a shooting game night. Its overall long-term value will depend on future games.