One of the most important pieces of equipment for any gaming set up is a screen. Typically this is either a TV or computer monitor, and while these are the most practical solutions, sometimes there are certain logistical problems. Sometimes a big screen TV just doesn’t seem big enough and the biggest TV I’ve been able to find online was 100 inches for about $3500. If someone wants the big screen experience without the headaches that come with acquiring some a mammoth television, a projector is a viable alternative. It’s an option that personally wasn’t seriously considered prior to learning about the XGIMI Horizon Pro, but this is a projector that’s ideal for streaming media and playing video games.

Getting into some of the technical specifications, the XGIMI Horizon Pro is a bright projector with 2200 ANSI Lumens that can project video with 4K (3840 x 2160) resolution. It has 2 GB of RAM and 32 GB of storage, and for streaming purposes it has dual-band 2.4/5GHz, 802.11a/b/g/n WiFi and Bluetooth 4.2/5.0. It has Chromecast built in and its operating system is Android 10.0 and is an officially-licensed Android TV product. It has a headphone jack, DC plug in, LAN port, 2 USB inputs and 2 HDMI inputs. It has built-in speakers so no additional hardware is needed for sound. Lastly, a Bluetooth remote control is included. The lamp life is rated for 25,000 hours, which equates to 17 years at four hours of daily use.

The Horizon Pro supports over 5000 native apps available from Google Play. This makes it a convenient way to stream just about anything in the home theater since most streaming applications can be run directly from the Horizon. During the review period there were no issues with streaming Hulu, YouTube, Tubi and HBO Max. We did run into issues with Netflix, where we could get into the app but got an error message whenever we tried playback. Netflix is not supported by all Android TV devices, and this is one of them, but there are a couple workarounds. One is running Netflix from a device attached through one of the HDMI inputs, such as a game console or Firestick, which is the approach we tried and can verify it works. The other approach is an app called DesktopManager, which tutorials for that can be found online. 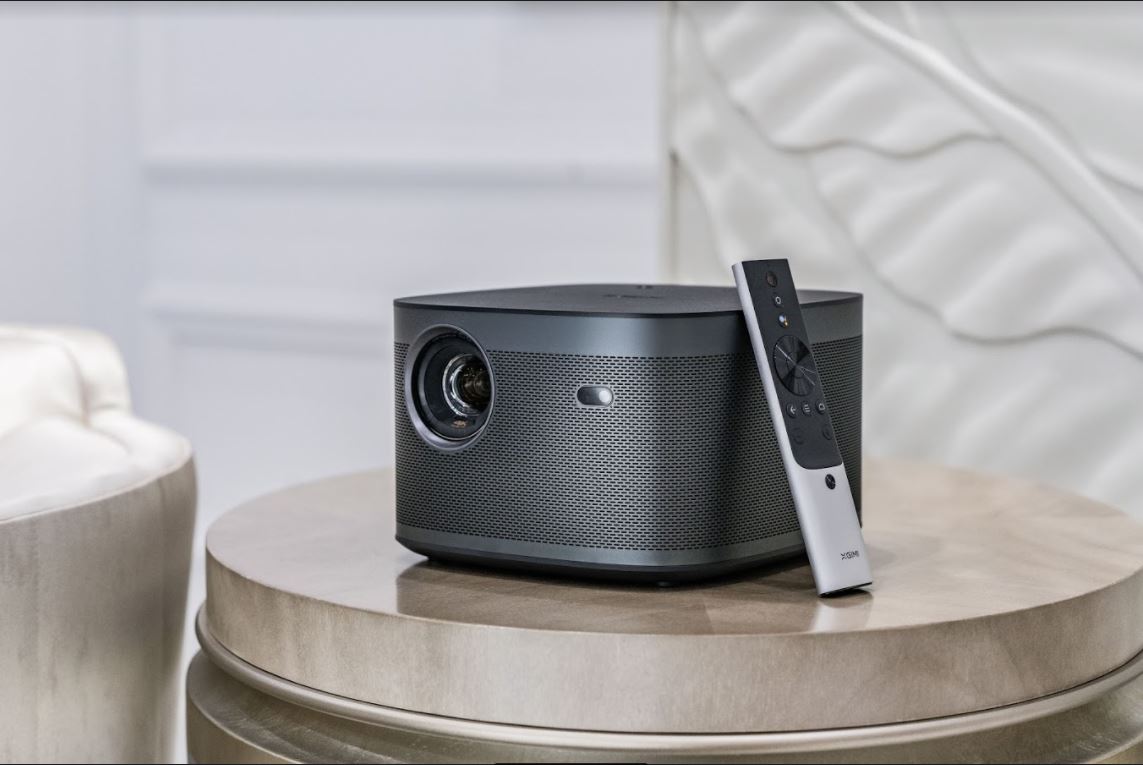 Getting the Horizon Pro set up is a straightforward process. Everything except for two AAA batteries for the remote is included. Set up consists of plugging in the DC cord with the rather massive power block and go through the guided set up prompts. Everything is done through the remote, and set up consists of adjusting brightness and contrast levels and connecting to WiFi. The projector is designed where it looks modern and sophisticated so even though projectors are typically kept in the back of the room, it looks pleasing with other forms of contemporary decor. The cooling fan was expected to be loud considering the brightness and power block size, but it’s surprisingly barely audible. Switching from apps is easy, especially if the user has experience with Smart TVs or similar devices and going from streaming apps from the Horizon to a device plugged into the USB or HDMI ports is just as intuitive. Getting the perfect screen position and size is all based on the placement and distance of the projector and using the screen settings. Screen size can range from 30 to 300 inches.

Now that we’ve established that the Horizon is an easy to use projector for streaming services, let’s now talk about the main thing I’ve been using it for, which is of course gaming. For the review the two platforms that were used were Stadia and PlayStation 4, but really any HDMI device will work. Running PS4 games in 4K looked great through the Horizon, and the built-in speakers were loud enough with high enough sound quality where a headset didn’t seem necessary to enhance the experience. I’d imagine watching movies in a home theater is why most people invest in projectors, but playing games through the Horizon Pro is incredible. Being a projector, the Horizon Pro delivers its optimal performance in a dark room. Bright and colorful scenes look fine in a window with natural sunlight coming through the windows during the daytime, but dark scenes leave something to be desired. In dark rooms the picture quality is phenomenal and nearly indistinguishable from a TV screen. But even with that caveat, the Horizon Pro in well lit rooms looks better than how some cheaper projectors look in dark rooms. The picture quality is for the most part good enough in well-lit environments, but setting up a room with blackout curtains would be advisable to maximize the Horizon Pro’s potential. Under ideal lighting conditions, a 4K game projected into a viewing area that’s well over twice the size of my TV is a fantastic way to enjoy gaming. 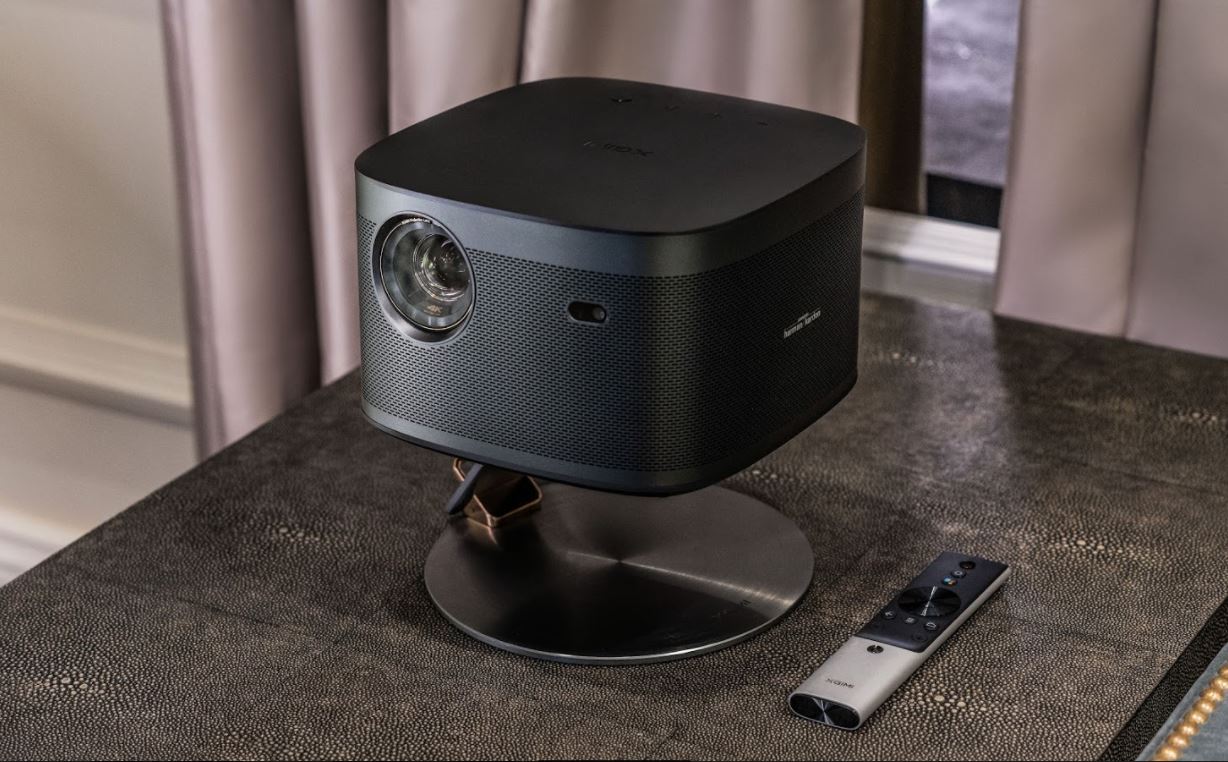 The XGIMI Horizon Pro exemplifies the adage you get what you pay for. With a MSRP of $1699 no one would consider this a cheap piece of hardware, but the overall quality is also indisputable. While the Horizon Pro performs solidly in well-lit rooms, its true capabilities are revealed in the dark viewing environments. One thing that is regrettably not included is a lens cover which would reduce anxiety about traveling with it. Overall, the ease of use combined with the picture and sound quality make this a great option for people who want an enormous screen without the logistical issues that come with a massive TV. Whether primarily used to watch movies, stream media or play video games, the XGIMI Horizon Pro is simply a great projector and a viable option to enjoy 4K gaming on a screen size that measures in the triple digits.