People are so high on the GTA launch that practically anything could be sold with even the slightest resemblance to the critically acclaimed game. Taking advantage of this, Teespring has shrewdly launched a new limited edition shirt inspired by the sandbox series. Stylized like covers from the games, the shirt simply says “GTA Made Me Do It” in the same font as their titles. Its wit is versatile as someone non-threatening can wear it ironically, while someone very threatening can…well, also hopefully wear it ironically. It’s a win-win however you look at it, sticking it to those who cry bloody murder (literally) every time a new game in the franchise is released.

Printed on a Gildan or Hanes blank, the shirt can be had for $12.99 plus a few bucks for shipping. It’s available in three flavors: a standard men’s tee, a women’s tee or a tank top. The design will only be printed if 150 shirts are pre-ordered.

Note that it’s unclear whether this is officially sanctioned by Rockstar. Check out a picture below: 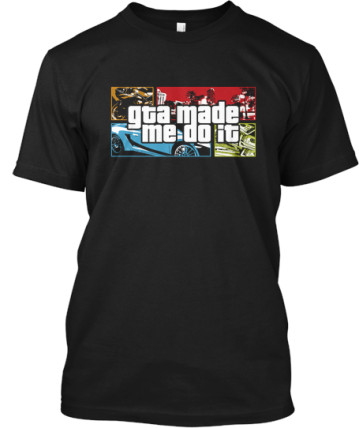