Yesterday, several members of the press were sent a mysterious 200-piece Jigsaw puzzle, courtesy of Activision. When completed, it revealed a picture of some sort of mask-like figure. Given the similarities to other characters like Aku Aku, as well as the character being spotted alongside the cast in a PS4 commercial from November of last year, rumor quickly spread that Activision was ready to unveil a new Crash Bandicoot game. Well, thanks to a leaked rating from the Taiwan Digital Game Rating Committee, it looks like that very well is the case. Ladies and gentlemen, we have Crash Bandicoot 4: It’s About Time.

The rating for Crash Bandicoot 4 was accompanied by box art and a description, courtesy of Gematsu: “Crash is relaxing and exploring his island in his time, 1998, when he finds a mysterious mask hidden away in a cave, Lani-Loli. The mask is one of the Quantum Masks and apparently knows Aku-Aku, Crash’s mask friend! With the Quantum Masks returning and a Quantum Rift appearing near our heroes, they decide to bravely head through to different times and dimensions to stop whoever is responsible.”

So going by the inclusion of 1998 in the game’s plot and the return to numbered titles, it would appear that the franchise is receiving a partial retcon similar to films such as the 2018 Halloween sequel. This does make one wonder if 1999’s Crash Team Racing is still canonical, but nonetheless, it’s definitely a major development for the franchise, which hasn’t seen a new game outside of remakes and re-releases for over a decade. Mind you, we still don’t have an official announcement yet, but it is likely coming soon. We also don’t have a complete list of platforms yet, but as seen with the box art below, it does appear to be heading to the PS4, XB1, and Xbox Series X. Stay tuned to Hardcore Gamer for more details on Crash Bandicoot 4: It’s About Time as they’re revealed. 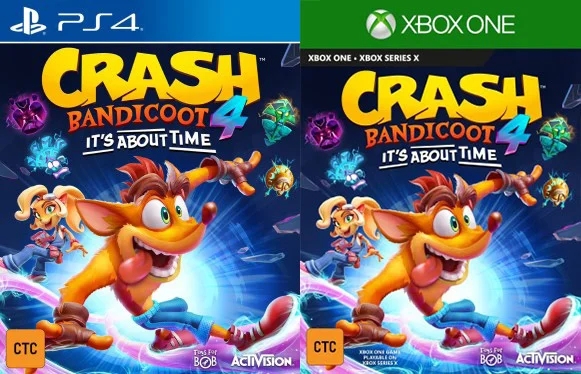