Deathverse – Let it Die Trailer Unveiled During State of Play

While “Old Navy” may not be the most appealing store to venture into on Black Friday, the clothing retailer is teaming with Nintendo to make it a tempting proposition. Those who spend $40 or more at the store on Black Friday will get New Super Mario Bros U absolutely free. As the Wii U is no longer a second fiddle console (or at least Nintendo hopes so), many games (including this one) will now run $59.99, making the Old Navy deal $20 cheaper than anywhere else regardless of if you want the clothes or not. As this is Old Navy…probably not.

The fine print of the ad is too small to make out, but quantities are likely limited and you probably won’t get to keep the game if the clothes are returned (though people will likely try). Old Navy ran a similar deal two years ago with Dance Central and handed out vouchers that could be redeemed at purchase for the first people in line.

More still, the Wii U will be available to demo all day long on Thanksgiving Day. What better way to spend the holiday than playing the latest console in a generic clothing store setting? Certainly worth not letting employees spend time with their families. 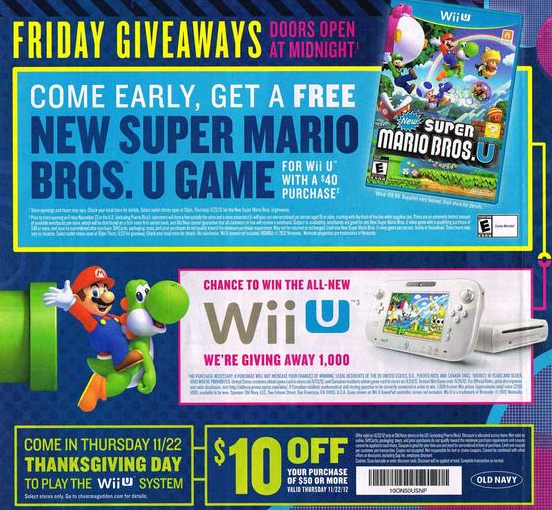