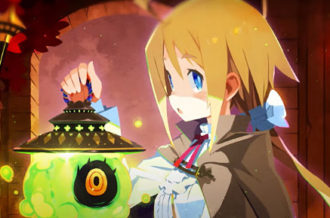 Dragon Blaze is moving at a staggering pace, with not only new dieties and keys to obtain, but various adjustments to the gameplay.

The most important addition in this patch are the two new Gigantes to obtain:

Right alongside her recent deity inclusion, Colossus’s Judgement Helios is the most sought after key for quite some time. This is a Paladin key that requires Helios, Drunken Falcon and Awakened Tiel to obtain. Her normal attack decreases the enemy’s attack speed, with her active skills centering on buffering her allies, for example, decreasing everyone’s cooldown rates by 80%. Her passive skills just aid this as Control Time and Space reduces debuff duration by 15%, Ruler of Time increases normal attacks by 72% while increasing cooldown recovery speed by 11%, and if you’re fortunate enough to Ultimate her, she grants one of the major attributes (STR, DEX or INT) by 20% on all allies, along with increasing skill damage by 40%. She’s a powerhouse not to be taken lightly and someone who’s incredibly well-rounded. 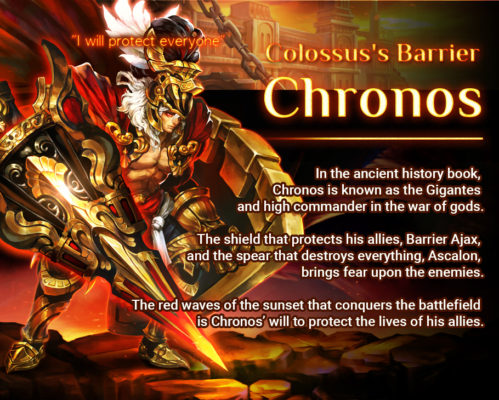 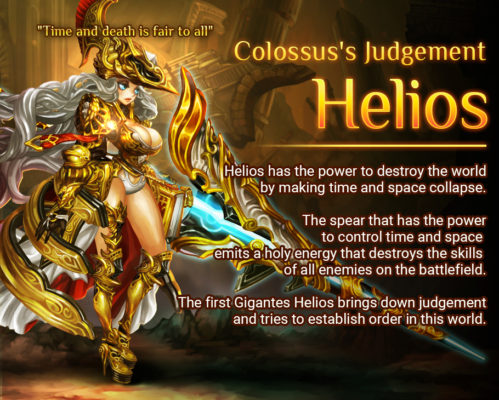 The second Gigantes is Colossus’s Barrier Chronos. As his name suggests, Chronos is a strength build who wields a giant spear and a colossal shield. In order to create him, you will need deities Chronos, Awakened King Gram and Deathcrown. His active skills aren’t necessarily for the damage they output, but the effects they leave. For example, Strike of Annihilation will decrease an enemy’s defense by 100% for six seconds, Ascalon’s Blood Cry will remove buffs from all enemies and prevent them from using skills, and finally Barrier Ajax taunts enemies so they focus on him, even decreasing ally received damage by 25%. His passive skills even boost similar traits, with increasing received damage and increasing stamina. If you decide to Ultimate him, Chronos will send 50% of damage back at an attacker whenever his shield is hit. Chronos seems just perfect for PVP fights, and maybe even Shariet.

That’s not all, though, as Revenge of Belphegor has risen its rounds to seven, the Chapter 3 difficulties have been merged into one, meaning you shouldn’t have a problem awakening all of your characters, and the Guild Adventure that’s on Friday has increased in difficulty. Things are looking good for Dragon Blaze, especially considering the pace they’ve set over the last few weeks.

Dragon Blaze along with this update is available right now for free on iOS and Android devices.